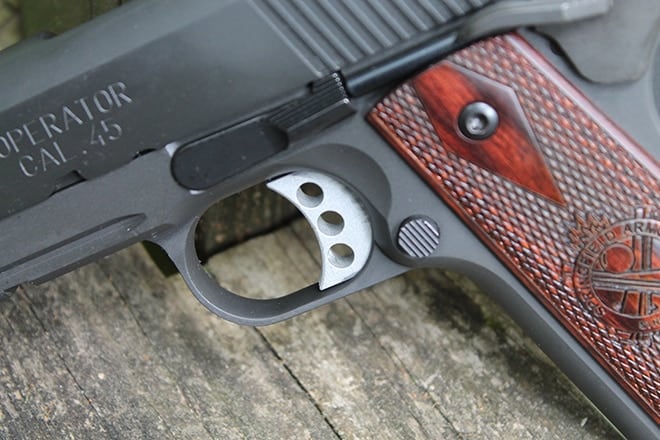 I first laid eyes on this gorgeous piece of classic hardware at SHOT Show 2016 and it was love at first sight. The forged carbon steel, parkerized to prevent corrosion and rust, pops against the warm checkered Cocobolo grips. Smooth and sleek comes to mind when handling this 1911.

Though Springfield has committed blasphemy, in my opinion, by offering the Operator in 9mm and .40 calibers alongside the traditional .45 ACP, the upgraded selection gives shooters of all varieties options. I begged and pleaded with a representative for some one-on-one time with this gun and Springfield graciously obliged by sending me the .45 ACP model for review. 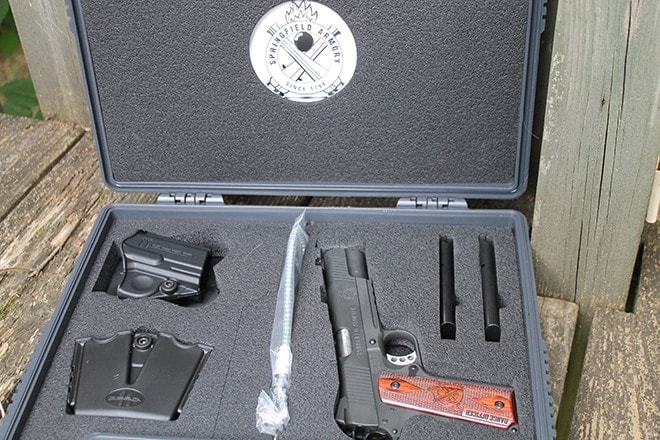 One of my favorite things about Springfield Armory is the amount of extras they stuff into their pistol boxes. Alongside the Range Operator, I found two magazines, one outside-the-waistband holster, mag carrier, manual and spare front fiber optic sights.

As a gear nerd, I appreciate the company sending what I see as a set of starter gear. OWB holsters, while not practical for everyday concealed carry, are a must on the range for me while I shoot. The inclusion of an OWB holster and mag carriers mean I don’t have to rush to my local gun shop for aftermarket accessories, which is always a plus. 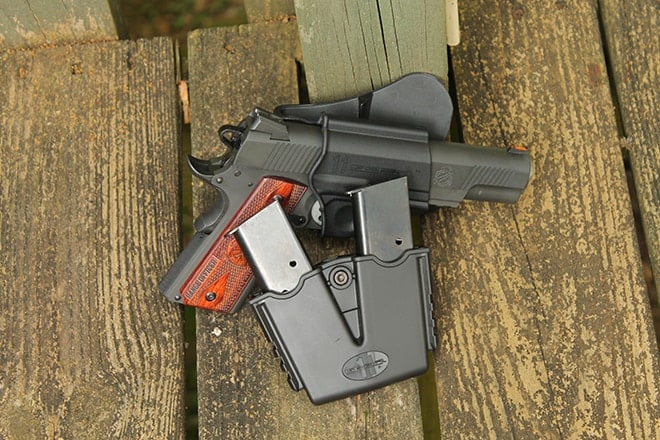 Speaking for of that mag carrier, shooters will put it to good with the two magazines that come included with the package. Bigger bullets mean less magazine capacity and this 1911 falls into that category. With a 7+1 capacity, versus the 9mm version’s 9+1 round capacity, I was glad to see Springfield included two magazines in the box. When carrying, I suggest loading up and stowing a second mag for extra oomph should you need it.

Springfield Armory opted to include a Picatinny rail on the underside of the barrel. Perfect for smaller lights or lasers, the rail gives shooters more options in terms of customization of the firearm.

I always like to save the best for last and when it comes to this pistol, the best is truly in the trigger. Not only is it a declaration in eye-catching stainless silver, it’s a dream on the finger. Advertised trigger weight is five to six pounds with a pull that is crisp and sharp. 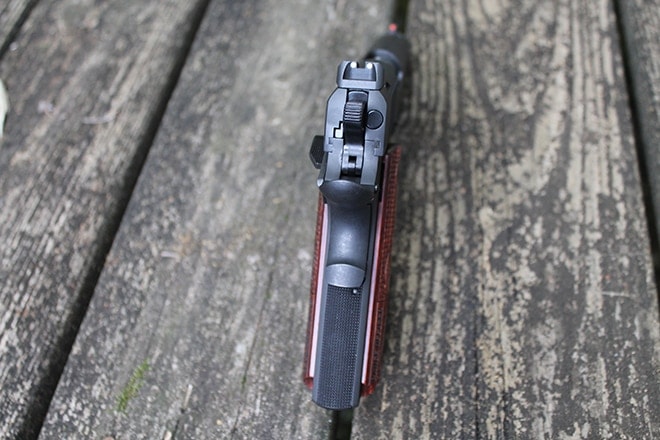 The Range Operator features a 3-dot iron system with front fiber optics. I’m always appreciative of sights that can be easily acquired on target and Springfield delivers. The front fiber optic, even in low light, stands out allowing my eyes to easily focus and align the sights. The result is faster sighting on target and better accuracy.

The .45ACP model features a 5-inch match grade barrel and an overall length of 8.5-inches. The longer barrel means a better sight radius and it was obvious the 1911 was tuned with precision in mind. My first two shots at the range drilled down the center of the target at 10 yards. I narrowly missed putting those first two bullets down the same hole. All other shots landed within a good radius. As the day dwindled on and the round count hit over 100, I was pleased to see that the Operator was still firing consistently and precisely. 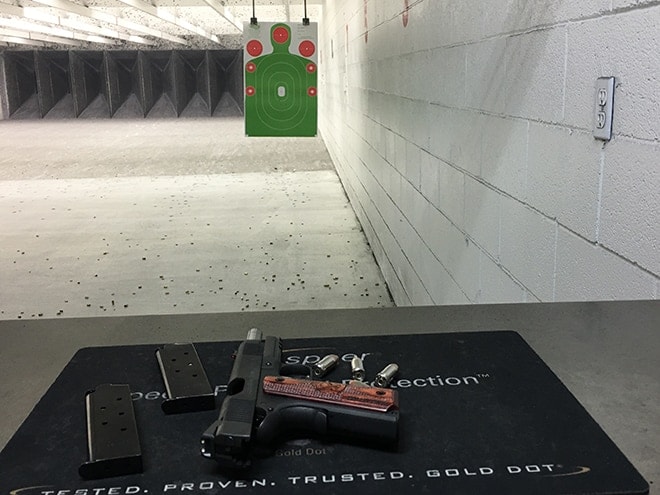 Accurate, reliable and consistent results on the range place the Springfield Armory 1911 a notch above the rest. (Photo: Jacki Billings)

I fed her a range of ammunition to include standard white box Winchester target ammo as well as PDX Defender 230 grain rounds. She ate at it like a champ, never faltering.

Recoil on a .45ACP is expected but the Operator’s 2.5-pound frame keeps recoil to a manageable minimum. Even as a small shooter, I was easily able to maintain a solid grasp on those lovely wood grips as I sent round after round downrange. I will add that even though I’m in love with the look of the Cocobolo grips, after a few hours of shooting they were tearing my hands to shreds. That’s the beauty of the 1911, though. I always have the option to switch them out to something a little more comfortable.

Springfield’s calling this their concealed carry version of the competition line 1911’s. While I wholeheartedly agree that this pistol is reliable enough to be a carry gun; it’s still a bit big. 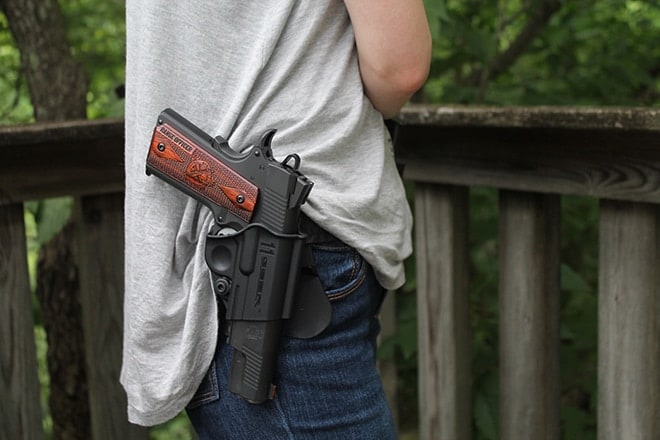 Though not unfeasible, a little large for concealed carry. (Photo: Jacki Billings)

When the flowers bloom and the pool season is upon us, Springfield fans would do better to look into the company’s compact 1911 line. I’m not saying you can’t conceal, I’m just saying being the guy wearing a sweatshirt in 90 degree weather might be a tip off. 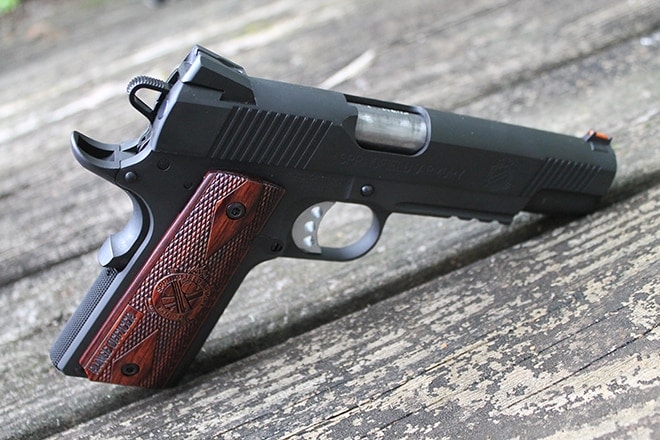 It’s smooth operation, consistency and accuracy on range makes it a perfect competition sidearm or just a plinker on the range. While Springfield pushes the concealed carry aspect, unless you’re donning a large over-garment, you’d do better to open carry this gun.

Concealing aside the Range Operator, which retails for $1029, is the perfect example of what a good 1911 should be.