Gun Review: Is the Springfield Armory XDS 9 the new standard for concealed carry?

I’m a big fan of the XDS.  I reviewed the XDS 45 right after Springfield Armory launched the gun.  It handles the recoil from the .45 ACP surprisingly well for such a small gun.

And the small package, which is by no means as miniscule as most .380 pocket pistols, is still much smaller than most .45s.  The only gun that comes close now is the Glock 30s, which is much wider than the XDS.

And now Springfield has launched the 9mm XDS, which is the same size as the XDS 45, the only noticeable difference is the barrel and the XDS 9 has two additional rounds in the magazine.  This will put Springfield in direct competition with Beretta’s Nano and Ruger’s LC9 — tough competition.

Why would you want a 9mm if you could have a .45 that was exactly the same size?  That is a complicated question and one we’ll explore in greater detail in another article, but let’s assume that you do.  Here it is. 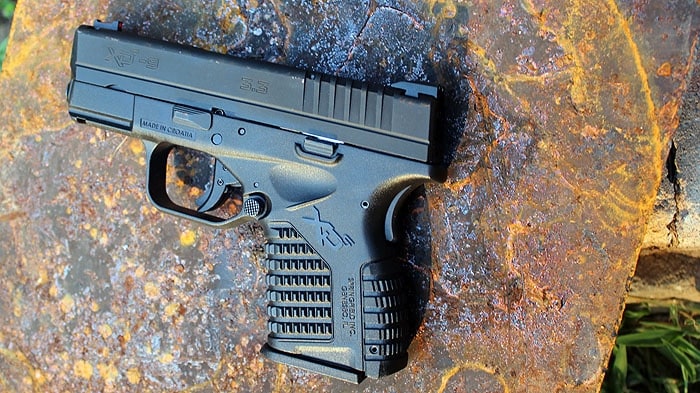 The XDS 9, 45 and 40 (soon?) are all the same.  It is a single stack striker fired pistol.  The short magazines offer the bare minimum in terms of available ammunition and grip.  The whole thing is 6.3-inches long and 4.4-inches tall.  The real selling point is the width of the XDS: under an inch.  The 9mm weighs in at 23 ounces with its flush fitting magazine (which holds seven rounds). 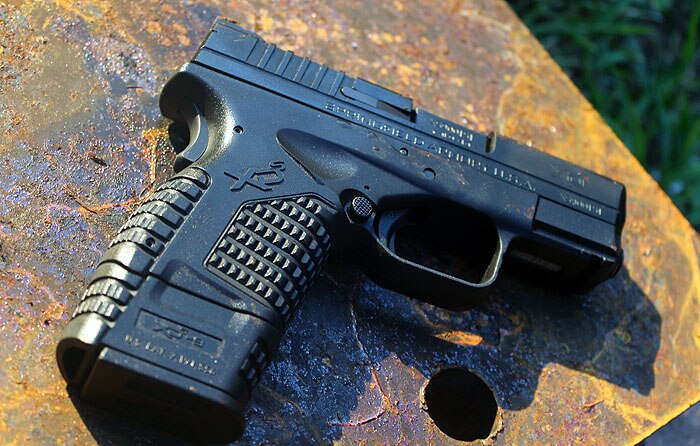 An extended XDS magazine increases the height and weight a bit, but offers two more rounds and a lot more to hold onto.  Concealment then becomes more of an issue, but it we’ll get to that.

The controls on the XDS are easily accessible.  The magazine release button is ambidextrous.  It doesn’t need to be flipped; it works from either side. 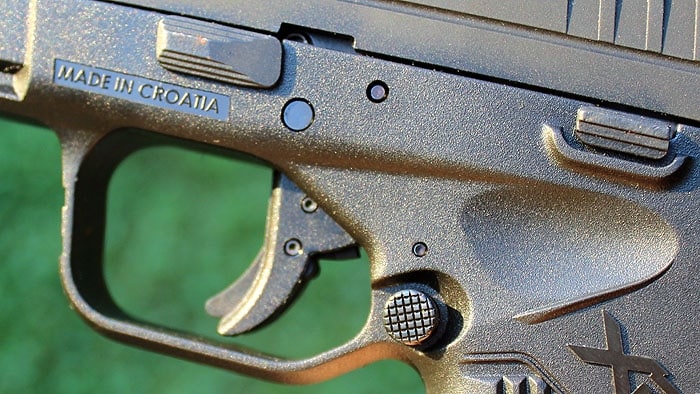 The slide drop on the gun is really small.  That is one of those catch-22s you’ll have to learn to live with.  A larger slide drop would put the XDS over an inch wide, and it could increase the possibility of snagging on clothing during a draw.  As it is, the slide drop won’t catch on anything.  I have a hard time getting it to catch on my thumb, even when I want it to.

However, a bit of practice helps.  I suggest that everyone practice reloads, no matter what gun you are using, but reloading practice is imperative with the XDS.  I prefer the in-battery reload.  Fire six rounds and drop the mag.  The seventh round will be in the chamber, and you won’t have to work the slide.  Problem solved.  If you can count under stress. 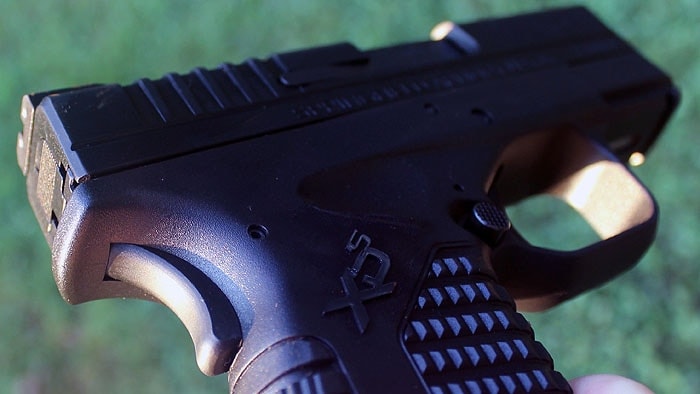 The safeties on the XDS are both functional and no-brainers.  This is ideal for concealed carry.  When you grip the gun, the grip safety is engaged.  When you put your finger on the trigger, the trigger safety falls.  I can’t feel either of them engage.  And no matter how I try, I can’t grip the gun in any normal shooting stance without clearing both safety devices.

Yet there’s not a slide mounted safety that I’d have to disengage before shooting.  And that can make all the difference in a fast-paced, adrenaline laced self-defense scenario. 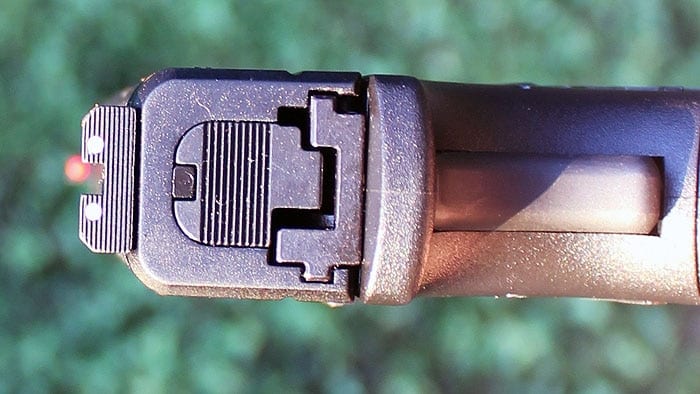 I really like the sights on the XDS.  I’m sure I raved about them with the .45, but these are really very functional.  The back sight is both flat, lined and rather rectangular.  All of these attributes make them great for accuracy.

They also have trimmed corners for a faster draw, and two white dots for faster target acquisition.

The front sights are fiber-optic and very bright.  The red insert glows like a light and remains visible in very low light conditions.  Both the front sight and rear sight are drift adjustable, which also means they’re replaceable, if you’d rather have something different.

I can’t think of a better sighting system for the XDS.  When you add in the squared shape of the slide, which catches the light in solid blocks of opaque glare, the XDS becomes a very fast pistol.  It points naturally.  Basic alignment can be easily accomplished by using the slide.  And the sights make pinpoint accuracy easy.  Not bad for a gun with less than 3 inches of rifling in its barrel. 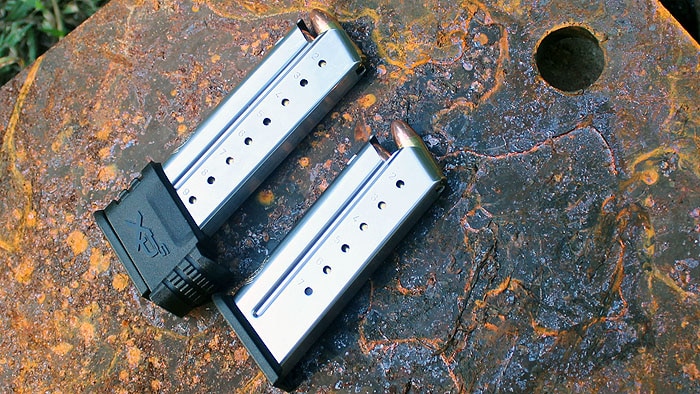 The magazines for the XDS are stainless.  The short magazine holds seven rounds.  The longer magazine holds nine and offers a lot more to hold onto, but that extra length makes the gun at least 6-inches tall, which can present more challenges for concealment.

With the short magazine, the XDS is just barely too large for pocket carry.  The Recluse Cargo Pocket Holster is an option.  Most will opt for a solid IWB holster.  And as the popularity of the platform continues to soar, those holsters are becoming more readily available.  I still prefer my Multi-Holster IWB.  However you go about it, remember that the 9 will fit in a 45 holster. 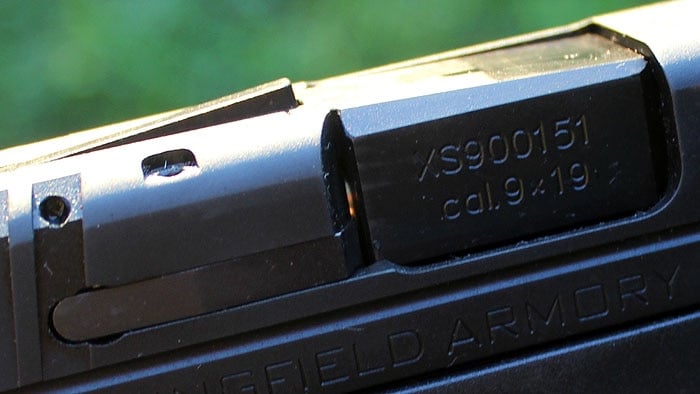 The XDS draws well.  There’s nothing to snag on holsters or clothing.  That speed is fundamental to any understanding of a concealed carry firearm.  I can tell you that the XDS will put down 3-inch groups at 25 yards, but that is meaningless.

What you are looking for is reliable accuracy at variable, unknown distances.  And that’s where the XDS excels.  Even with hopped up 9mm, the recoil is light enough to allow for very accurate double-taps.  And the aggressive texture on the frame allows for a firm grip, even when you pinky is hanging below the magazine.

In the video above, I’m shooting steel plates of varying sizes.  I’m not shooting like I would in competition.  Instead, I’m engaging the targets a bit more randomly.  And I miss occasionally.  But when I miss a 10-inch plate, I’m not missing by much, and the follow up shot usually hits home. 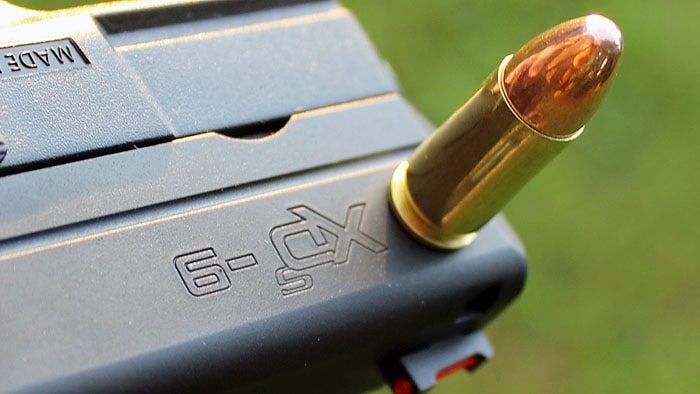 Is the Springfield Armory XDS 9 the new standard for concealed carry?

I haven’t found anything about the XDS that I don’t like.  I’ll confess a preference to the .45 for concealed carry.  I like the round.  But I like having the seventh round in the magazine, too.  It is a tough call, for sure.

And it isn’t one that should be taken lightly.  I usually carry a .380.  I’m rarely separated from it.  Yet I believe in staging your preparedness.  If you feel more threatened, act like it.  Make sure you can get to your gun. Make sure your gun is ready.  But you don’t have to be threatened to begin making preparations, and that’s when caliber selection is crucial.

I carry a .380.  If I’m headed into the woods, where I often carry open, I’ll take a .357.  I’ve been carrying the XDS .45 now for almost a year, especially when I’m going someplace or doing something that may put me or my family in a more risky situation.  Now maybe I’ll carry a 9mm.