The Springfield Mod.2 came my way early last spring. On the hunt for a new concealed carry handgun and a fan of its double stack design, I took a chance on the newest firearm from Springfield.

It arrived, in the standard plastic Springfield box, with 13 round and 16 round magazines. A gorgeous bi-tone with clean-cut lines, the Mod.2 was a thing of beauty. 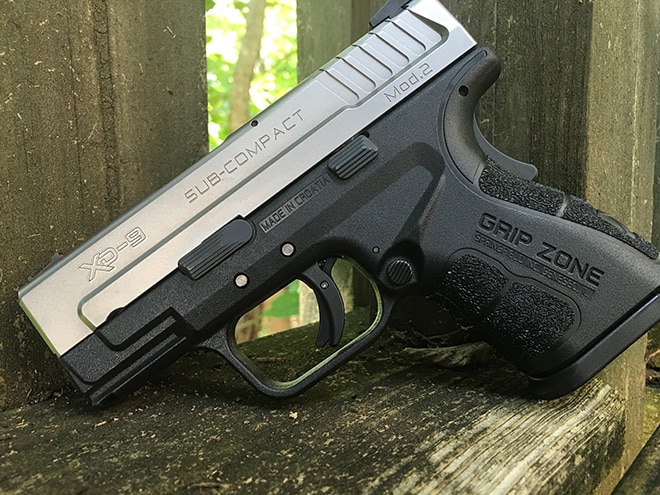 The 9mm, striker-fired Mod.2 features a 3-inch barrel on a 6.25-inch by 4.75-inch  frame. The double-stacked sub-compact comes with an aggressive, textured grip lovingly labeled the “Grip Zone.” While I think the name and the need to prominently feature the logo on the actual gun is a little cheesy, the purpose proves to be a winner. The Grip Zone provides good, solid contact for the shooter’s hands without rubbing or irritating skin. 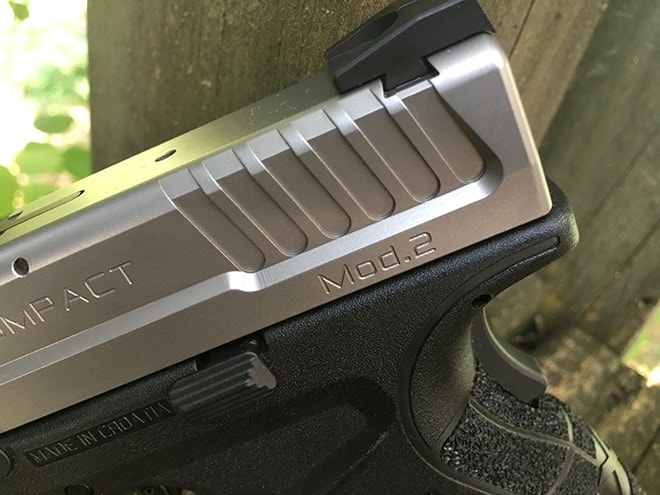 A grip safety must be depressed for the trigger to engage. (Photo: Jacki Billings)

Also on the grip is one of two overt safety measures. The grip safety, embedded into the frame, prevents the trigger from moving rearward when not depressed. Not only does this encourage a good hold, it also aims to prevent any unauthorized object or child from manipulating the trigger and causing a boom.

A secondary safety also rests forward of the actual trigger. The aptly named trigger safety prevents the trigger from engaging unless the mechanism is pressed correctly. In this regard, Springfield doesn’t just offer up a gun, they offer up a gun that encourages good technique. 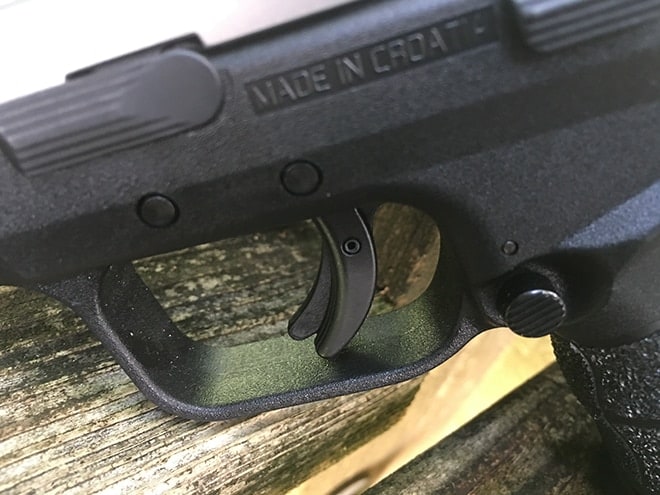 A trigger safety aims to prevent the actual trigger from being engaged by objects that might come into the trigger guard. (Photo: Jacki Billings)

Moving to the top-half of the gun, shooters will discover fiber optic sights that rest on top of the stainless steel slide. Luminescent and easy to spot on the draw, the sights compliment concealed carry where quick targeting is a must.

With an old-school Springfield XD full-size pistol already in my arsenal, I’ve come to expect a certain level of quality from the Illinois company. The Mod.2 certainly didn’t disappoint. 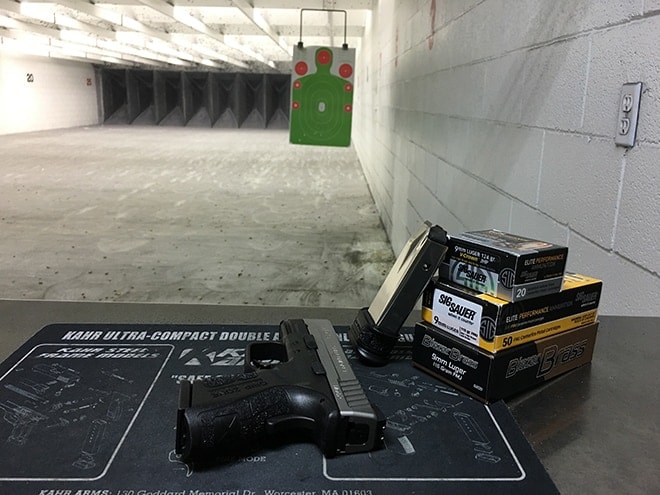 The 9mm performed flawlessly on the range, proving to be a reliable gun with consistent results. (Photo: Jacki Billings)

I’ve owned the Mod.2 for a year now and it has yet to fail me. Whether it’s spitting out top of the line ammo or the gritty stuff pulled from the back of a forgotten shelf, the Mod.2 just keeps churning.

Despite being a smaller firearm, recoil is easily managed. Follow-up shots land on target. Even while firing one-handed, control over the Mod.2 is a cinch. At no point did I ever feel as if the gun was slipping out of my grasp. 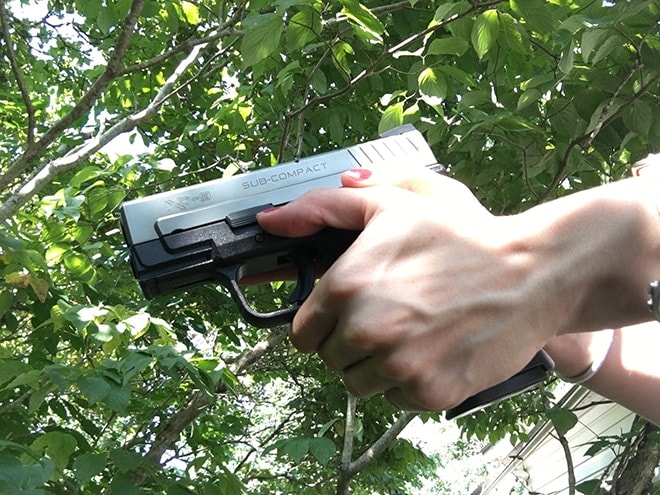 A proper grip is a must for this gun to function properly. Failure to do so will yield no bang. (Photo: Jacki Billings)

About the only thing that will stop a good time with this 9mm is poor grip. While the aforementioned grip safety is great for ensuring the kids’ hands don’t cause a bang, it proves to be an issue if your grip slips while shooting.

Admittedly, if you’ve taken a good class and practice as you should, maintaining a proper hold on the gun shouldn’t be an issue; but for newbies it might prove a bit frustrating at first.

The author concealing the Mod.2 in a t-shirt and jeans. (Photo: Jacki Billings)

Where the Mod.2 really shines is its function as an everyday concealed carry firearm. I’ve toted the Mod.2 around for 365 days and I can honestly say it’s about as comfortable as one can get with a double-stacked design.

The key for stowing this thicker gun, especially on a petite or smaller frame, is a good holster and belt. Over the past year I’ve tested out the Alien Gear, Crossbreed and StealthGear with the Springfield Mod.2 and all concealed the gun in the behind-the-hip IWB configuration well. Pair that with a solid gun belt that pulls the gun further into the body and the Mod.2 all but disappears. 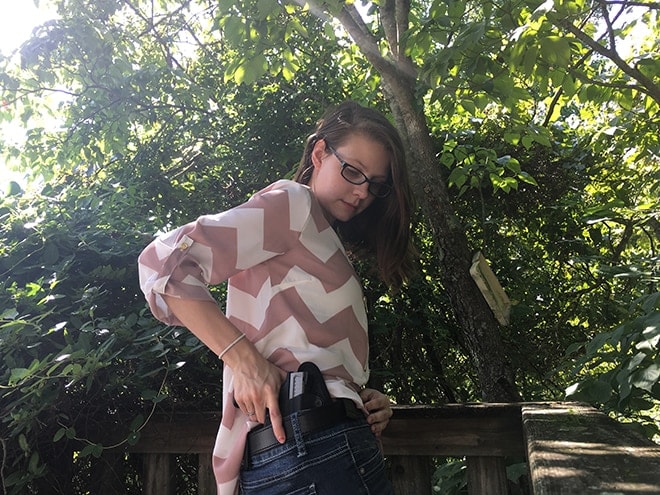 The Mod.2 has a variety of holster options available and is a great option for concealment, even on smaller frames. (Photo: Jacki Billings)

As a smaller shooter, I tend to stick with the standard, flush 13 round magazine. This configuration also compliments my smaller hands which rest comfortably about the Mod.2. Shooters with larger hands may find the flush magazine awkward which is why Springfield tosses in an extended magazine. The extended mag gives more gripping real estate and three extra rounds. On the range, you’ll also find me running the extended mag for that little bit of extra room. 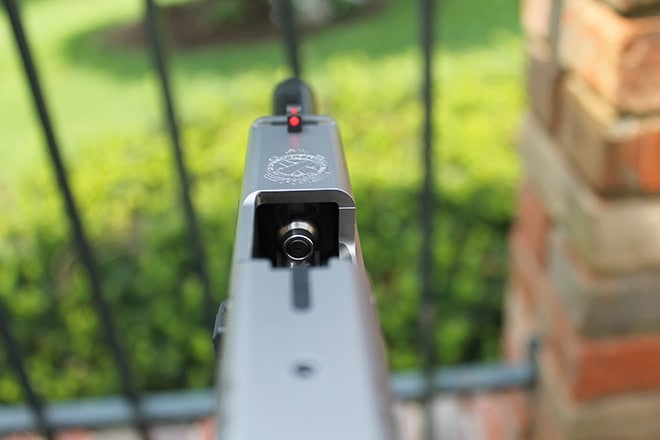 Coming off the success of the XD series of pistols, Springfield knew it had a winner when it unleashed the Mod.2 in 2014.  Though I could live without the Grip Zone logo, the Springfield knocks it out of the part in every other facet of design. 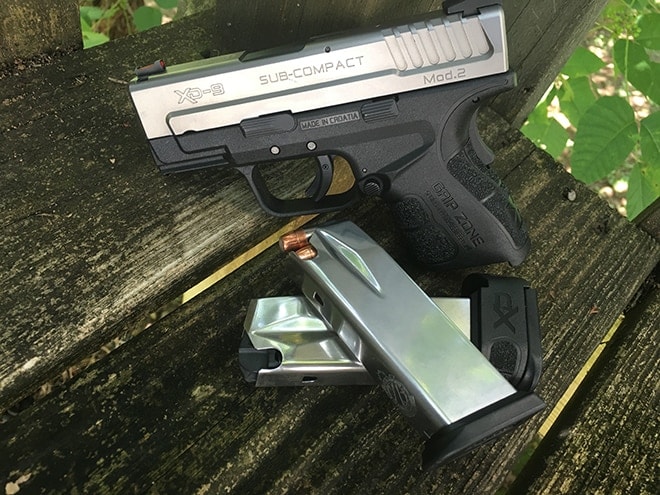 A flush 13-round mag and an extended 16-round mag accompany the pistol and give shooters more options in round count and in gripping. (Photo: Jacki Billings)

From the fiber-optic sights to the extended magazine and everything in between, the Mod.2 sub-compact is an excellent choice for shooters of all skill levels. The Mod.2 comes in three color schemes— black, bi-tone and flat dark earth – with prices starting at $565.