Gun Review: Springfield XD-S gets a B+ (VIDEO)

With the XD-S line, Springfield Armory answered the call for a concealable, single-stack handgun that can double as a range gun in mostly fine fashion. There’s a lot to love about this compact pistol, plus a few traits that some individuals will either find appealing or detrimental.

Among the wins here, and probably not news to Guns.com readers, are the caliber choices (including avoidance of the often-maligned .380) and single-stack configuration.

Springfield continues its XD packaging tradition by boxing this gun with a paddle holster, two flush-fitting, seven-round magazines, interchangeable backstrap insert, a cleaning rod and a brush. Finally, there’s a V-configuration magazine pouch with rails on each side, making it handy for the rare user who would mount a light on and off the gun during practice.

An optional accessory is a grippy, full-size nine-round mag. This addition makes the gun easy to transition to range use or, for those who can conceal its bulk, offers more rounds for self-defense.

Speaking of grippy, the XD-S frame has a high-traction interface with the grip texture being more akin to hiking soles than sandpaper. Coconut oil-soaked defensive encounter at the beach? No problem with slippage there.  But the gun might leave unsightly tread marks near the Speedo (or bikini) if the user carries without substantial material between skin and pistol grip. 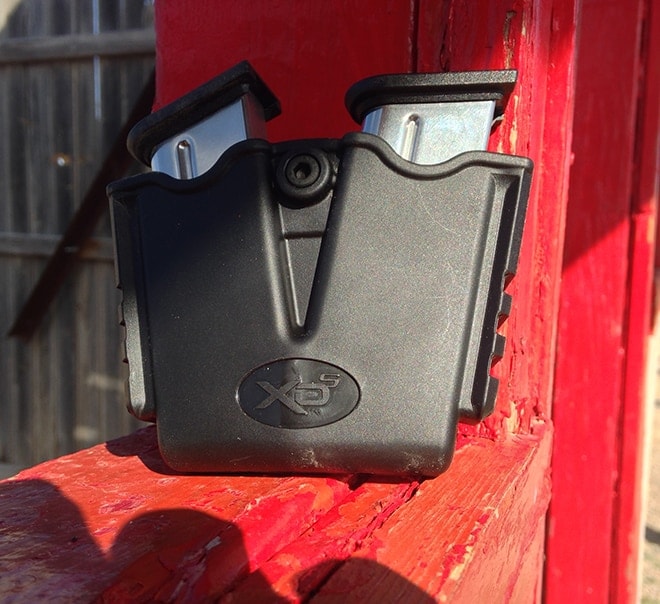 The shooting is almost as sweet as a piña colada. A red fiber optic front sight, flanked by white-dot rear sights, invites quick target acquisition, though night sights would be ideal. The trigger has just enough slack to not feel like a competition trigger, with a crisp reset.  In 9mm, recoil is minimal thanks in part to the 23 ounces of heft packed in this gun. Its accuracy and ease of shooting are on par with its full-size, polymer-lower counterparts. The grip is long enough for small to medium hands to avoid the distraction of a dangling little finger, yet the slim build allows proper trigger operation and grip. The XD-S can move easily from concealment to range practice, as well and perhaps better than any model currently available.

Carrier safety habits are enhanced by the passive measures of a safety trigger and grip safety, unchanged from the double-stack XD series.

This writer is a longtime user of a full-size XD, so some comparisons with the earliest XD-S predecessor are in order, specifically regarding magazine issues. Two of the four metallic factory mags of the full-size XD hang up in mid-drop during the unload process, requiring a slight brush downward to help them drop free from the well.  Perhaps someone complained about this, as it appears Springfield did their level best to correct the error.  All empty mags positively shoot from the well of the XD-S as if sprung from a tiny slingshot… a vast improvement from the writer’s broken-in, full size XD in .40 caliber. 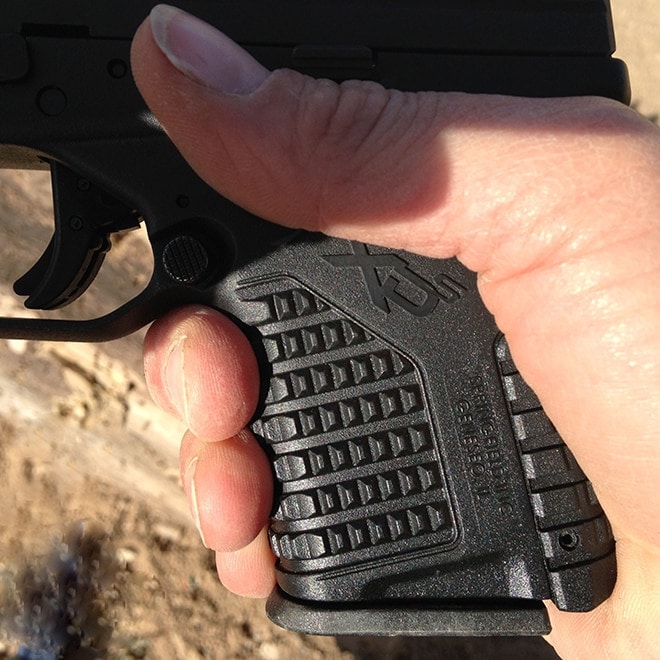 The XD-S’ grip is more like the sole of a hiking boot than sandpaper and the mag release is very stiff. (Photo: Eve Flanigan)

In testing, however, this improvement was negated for this shooter by the significant stiffness of the mag release.  Some qualifications to bolster this complaint: the primary tester in this case is a female who easily operates handguns ranging from a full-size 1911 to a tiny .32, with no physical challenges that interfere with gun operation.  She found it nearly impossible to release the magazine with the firing-hand thumb, nor did the trigger-finger release method work.  The latter is possible because the XD series has always-accessible, fully ambidextrous mag release buttons—an appealing feature.

This problem occurred with two XD-S 9mms, both new out of the box.  A larger, male tester described the magazine release as “stiff, but workable.” It is probable that this is a problem that will be overcome or lessen with the break-in process.  It is, unfortunately, something that would likely discourage a user who’s new to handguns and has the potential develop bad habits as a smaller or weaker shooter develops their own methods for mag release.

The XD-S is a handsome and dependably-shooting handgun with an MSRP of about $599 (in black).  In sizable and fit hands, it makes a great choice for the concealed carrier who wants the economy of a gun that double as a range practice tool. Its high-traction profile offers sure grip. Smaller shooters will want to test their capability of magazine release operation before purchasing this gun.