The term “Machine pistol” nowadays seems to conjure an image of some kind of handgun capable of full-auto firing. But it initially referred to something like the WWII-era German MP40 (“Maschinenpistole”-40), which is more like a conventional submachine gun with a pistol grip, an extended receiver or frame (compared to your typical handgun) and some variety of folding stock.

The original MP40 was well designed for use in close quarters – by assault troops, paratroopers, and tank crews – with a 10-inch barrel and the folding rear stock. It was a fairly simple and robust design, using stamped and cast parts. It used a typical open-bolt design gun and fired the 9mm cartridge, so it’s reasonably accurately out to 100 yards. Although a pretty reliable weapon, there were problems with the 32-round magazine jamming. 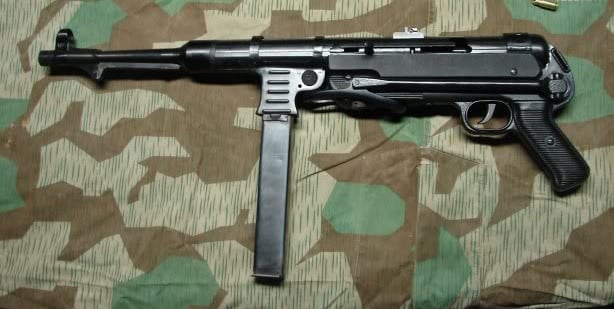 There have long been surplus and used MP40s available for the right price (upwards of $20,000 here in the U.S.) and with the appropriate paperwork, but a few years back one small, now defunct, company called SSR, which made a lot of WWII blank-firing replicas, decided to try their hand at recreating the MP40.

Like many other WWII-era reproduction firearms, the design was modified to comply with BATFE regulations for normal civilian-legal semi-auto guns. In the case of the SSR MP40 this meant changing over to a 16-inch barrel (however, they also sold a SBR version with the standard 10-inch barrel) as well as changing the operating mechanism from an open-bolt design – where the bolt strips off a round from the magazine, chambers it and fires it, then blows back to the starting position as a function of recoil – to a closed-bolt design found on most modern semi-auto firearms.

The model under scrutiny was one of the civilian-legal guns. It was fairly new and hadn’t been shot much. It still had the original magazines with it and also had a functional folding stock.

The fit and finish on the gun was only OK, which gave it the appropriate feel for a wartime-era gun. It didn’t feel shoddy, but it wasn’t a particularly high-end firearm. The pistol grip and housing over the receiver was all a dense, hard, slick plastic, meant to be similar to the original. There was no manual safety on the gun, as there wasn’t on the original.

The trigger was just acceptable. Not great, but not rough. A bit stiff, as might normally be the case with a military-style gun.

The sights were fairly rudimentary and the front sight was just midway down the barrel, about where it would have been on the original short barrel. I only tried the gun out to 25 yards, but it was acceptably accurate at that distance, popping six-inch steel spinners and tin cans more often than not.

One nice thing with the design is that it was fairly easy to get down behind the sights to aim the thing, which can be a bit of a problem for me with some small carbines. Holding the fore-end of the gun with your hand around the magazine well seemed to give the best grip on the gun. 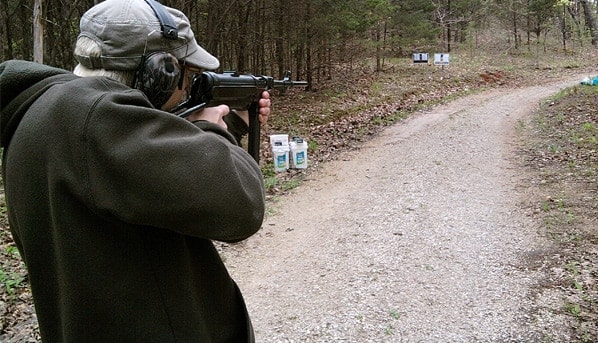 Recoil was almost non-existent. At nine pounds, this is a relatively heavy little gun. Function was fine. There were no problems with either ball ammo or JHPs, but we only put about 50 rounds through it. I understand that the gun (both this reproduction and the original) could be more temperamental after a lot of use if it wasn’t cleaned properly.

It was a cool little gun, and neat to get a chance to shoot something similar to the original MP40. And if you get a chance, give one a try. But these are fairly rare guns, and weren’t inexpensive to begin with – on the order of about $2500. Don’t expect to pick one up at a bargain anytime soon.