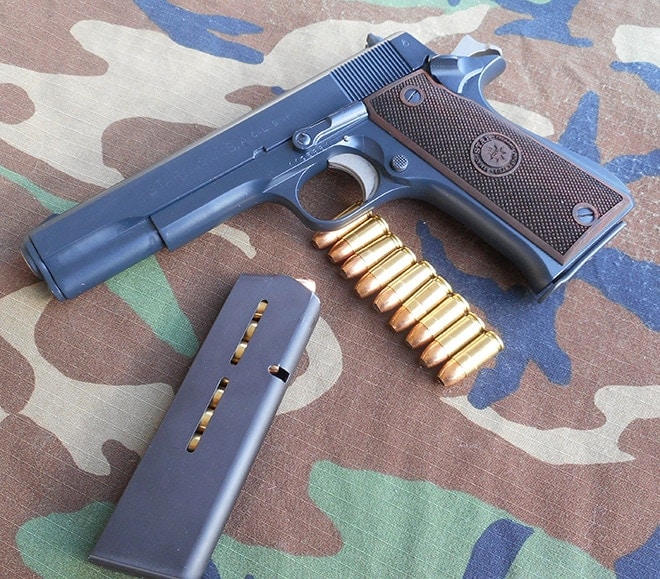 The STAR Super B’s lineage from the 1911 is quite evident on the outside. (Photo: Francis Borek)

There are plenty of reasons why modern shooters enjoy 1911 handguns and, despite valid criticisms, John Browning’s famed design still endures to this day. One criticism that dogs the 1911 these days however are the prices.

New US-made 1911s can start at around $650 and work their way up from there (unless of course you catch a store having a sale). Foreign made examples start around $400. To complicate matters, long time shooters of this platform often won’t even touch a 1911 under $800 and will advise others to do the same. Then there is the price of ammunition to factor in as well.

Luckily for many, Spain adopted a near-clone of the 1911 and kept it in service for decades.

Soon after the First World War (in which they were officially neutral) the Spanish Army realised that their standard issue handgun was too complex for the modern battlefield. “Complex” made for a gun that cost more in both money and time, two factors armies could not spare in war. Accordingly, Spain re-evaluated what their native handgun companies, like Star Bonifacio Echeverria, S.A., were producing alongside the designs that had seen action during the Great War. 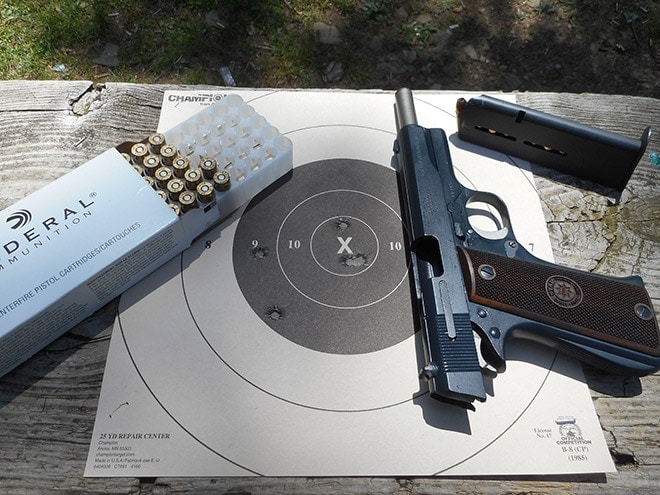 A five round group with Federal JHP’s. None too impressive, but workable. (Photo: Francis Borek)

After this evaluation the decision was reached to adopt a clone of John Browning’s Colt M1911 handgun for both practical and commercial reasons. In 1920, Star Bonifacio Echeverria, S.A. produced a pistol, designated the Star Modelo 1920, for Spain’s Guardia Civil. An updated version, rechristened the Model 1921, appeared the following year. Soon after the Star Model A was marketed to civilians and in 1924 the Model B began its first generation of production.

Changes to both models A and B continued concurrently, including the removal of a grip safety and the addition of an arched backstrap, with each variant modifying and simplifying the design further. Initially the family of pistols was chambered in 9mm Largo, but it eventually included the 9x19mm cartridge. A second generation of the Model B started production in 1931 and would not stop until 1983 with a large number of variants in between including the Model B-Super, Model BS, Model BG, and the compact BKS/Starlite, BKM and BM. 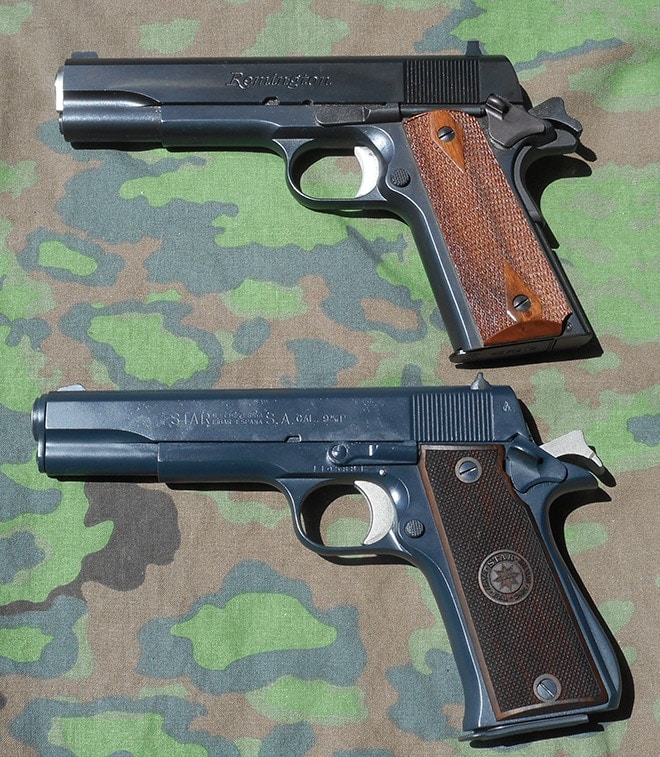 Despite being the same size, the Star Super B weighs considerably less than this Remington 1911. (Photo: Francis Borek)

Spain declared itself neutral once again during the Second World War, though they would give some support to the German cause until 1944. This included the sale of Star Model B pistols to Germany.

Following that conflict, Spain eventually joined NATO and once again their armed forces found themselves in the market for a new pistol to go with the new CETME rifle. Finding nothing especially wrong with the Star Model B, they decided to simply update the basic design. Gone was the swinging barrel link; in it’s place was a linkless barrel reminiscent of the Browning Hi-Power. Disassembly was further simplified as well, with a large takedown lever on the frame. These pistols would remain in service into the 1980’s when they were replaced by the Star Model 28 and 30.

And with armories full of old handguns, the Spanish have begun to sell off the venerable old Stars for bargain basement prices.

These old pieces generally have a blued finish, though some may have been refinished at one point with black enamel paint. Grip panels are a rather ugly checkered orange-brown plastic. Though durable, they’re generally not very attractive.

While the original finish was doubtless attractive when the pistols rolled off of the factory floor, one must remember these are surplus handguns. They will show use and that means the finish is often worn and/or pitted. 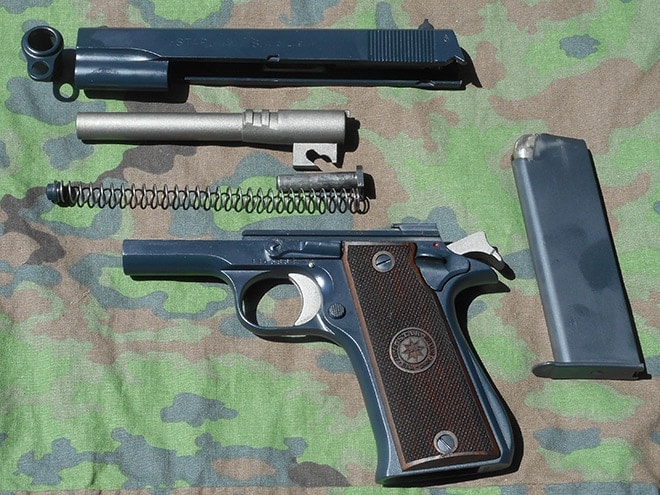 For many this doesn’t matter as they simply want a shooter, or an inexpensive handgun for self defense. However for those looking for a project, this pistol is an inexpensive choice to turn into something nice. My example was professionally refinished with a blue Cerakote finish, and the grips replaced with a pair of walnut laser-engraved grip panels. As for historical value, the vast majority of Star pistols are being imported from Spain. The majority spent their time in holsters and armories, so their historical value is basically nil.

There are a few Star pistols that have been imported which saw service with the South African Defence Forces and the Rhodesian Security Forces as well as some aforementioned guns out there somewhere that were sold to Germany during WWII. As these pistols do have historical value, it’s best not to refinish them.

The controls on the Star Super B mimics the layout and ergonomics of the Colt 1911 though not seamlessly. This means that they are placed where God and John Browning intended a handgun’s controls to be and an easy to hit for the average shooter. What’s missing are the plunger for the safety, the grip safety and the slide release. Also the arched backstrap is not removable. The trigger pivots instead of sliding straight back, and the safety disengages the sear instead of blocking it. There is also a ridge of sorts at the bottom of the grip for what I am assuming is meant to enable better control. 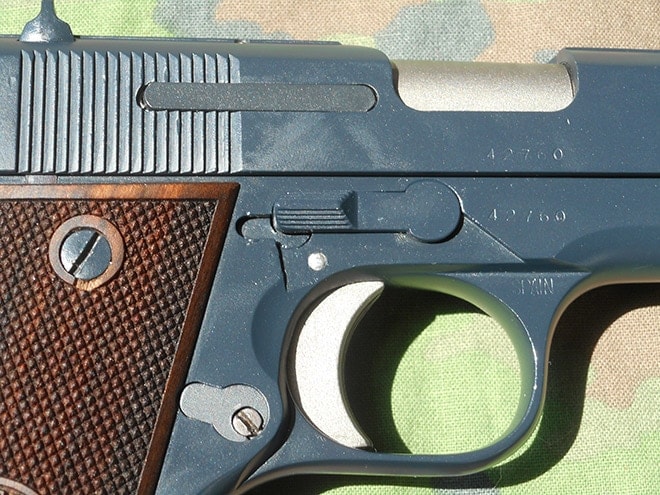 The takedown lever and external extractor make it clear that this isn’t a true 1911. (Photo: Francis Borek)

But the biggest changes from the original 1911 design are the external extractor and the large takedown lever. Simply rotate it downwards and the slide can be removed off of the frame. The guide rod and recoil spring comes off next, followed by the barrel bushing and the barrel for disassembly. Far easier than most guns today, it should be perfect for novice shooters.

On the range, the Super B is not a match shooter, but it was never meant to be. One shouldn’t expect pinpoint accuracy. Although the trigger has a nice break, it is a little on the heavy side, breaking around six pounds. With 115 grain Federal JHP’s, the Super B brought in a 3.5 inch group; with Blazer Brass 115 grain FMJ’s, an eight round magazine came in under 4-inches. Both groups were shot at ten yards, and all rounds were kept in the black. Not perfect, but good enough for a combat pistol that was made in the 1960s. With the factory magazine, reliability is good and my weapon cycles perfectly. However with an aftermarket magazine, my Super B seems to jam every other round. My advice would be to avoid these magazines or use them only to practice clearing malfunctions. 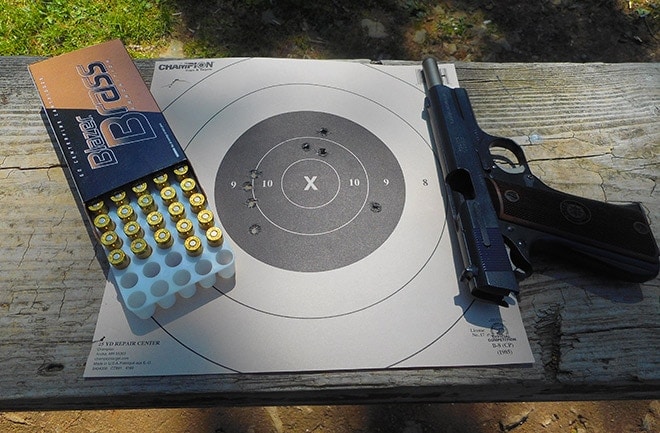 At the end of the day, the Star Super B is a genuine workhorse of a handgun, designed for service use and not for the target range. As long as one has factory magazines handy, then the Super B can be used for both fun and defense. Most will purchase the Super B because it is a 1911 without the 1911 price tag. 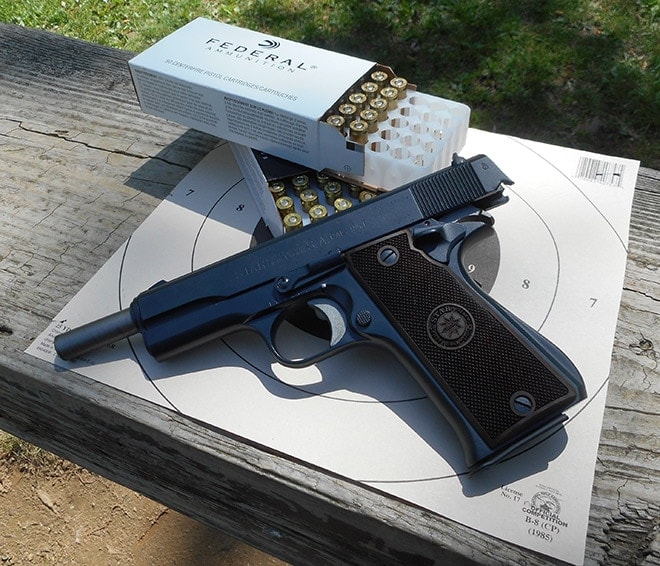 With it’s low price, the Super B proved to be quite the Star on the range. (Photo: Francis Borek)

Despite the bluster of many in the shooting community, the 1911 is far from it’s deathbed. With the Super B, a novice can get his hands on something close to a 1911 without breaking the bank. In addition, 9mm is far less expensive than .45 ACP meaning that they can practice more often. Novice and experienced shooter should be able to get plenty of mileage out of a Star Super B.