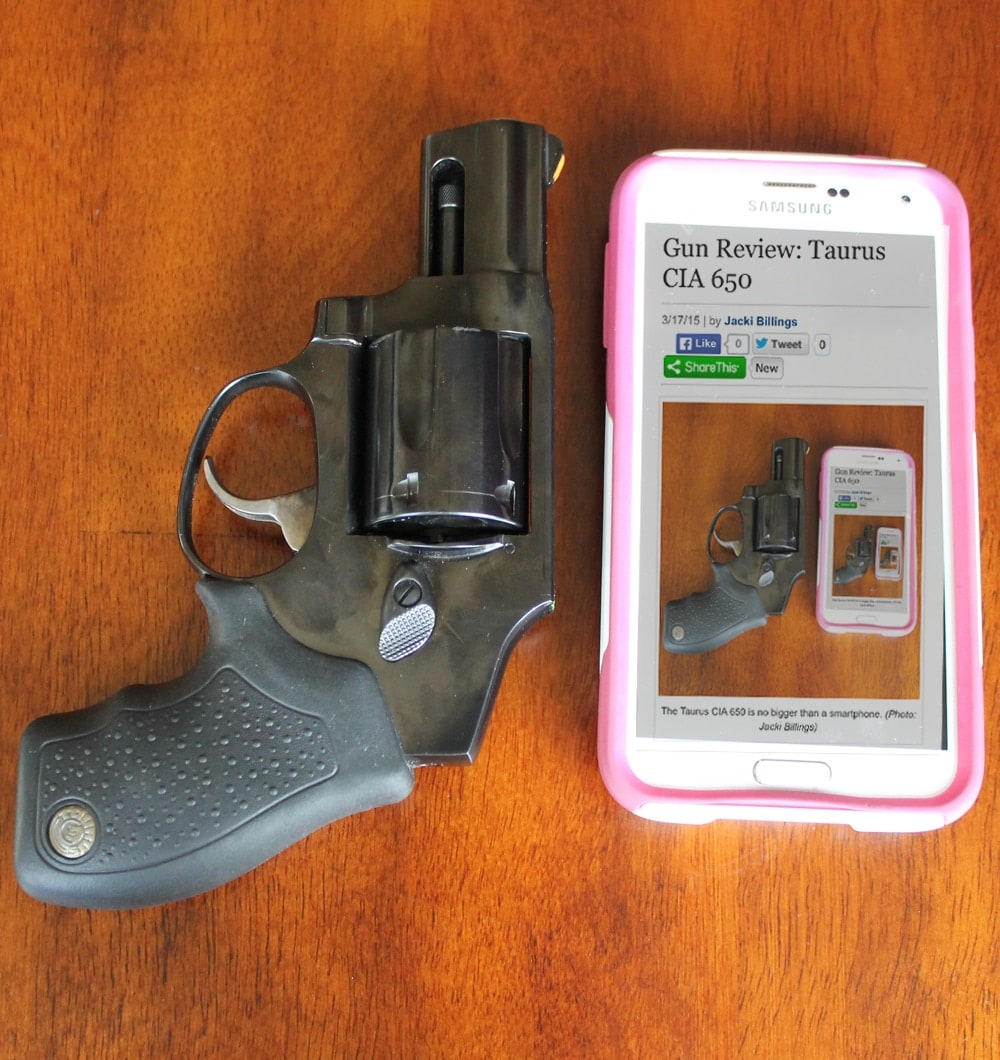 The Taurus CIA 650 is no bigger than a smartphone. (Photo: Jacki Billings)

Mention Taurus and you will inevitably find doubters who write the company and its firearms off as unreliable and cheap. True, Taurus has had a muddy past but recent years and a company shake-up have driven the manufacturer to tighten quality control.

Researching concealed carry revolvers, I wanted something that packed a punch but that could pair with a t-shirt. There and then the Taurus CIA 650 landed in my lap as a viable option.

Power in a small package

Chambered in .38 special or .357 Magnum, the CIA is +P rated. Five rounds are all you get with this revolver, but five well-placed rounds will do you just fine. In fact, it’s probably a blessing that you are limited. The Taurus is double action and that means a long and hard trigger pull. A day at the range had my trigger finger begging for mercy. If you like to spend a day punching holes through paper, run about 50 rounds through it then call it a day.

If your trigger finger is intact by the end, hope that your wrist and forearm are too. Recoil is a formidable adversary, not uncommon when you pair a large round with a small handgun. Prepare for some decent kick. Though not so bad after 10 or 15 rounds, 40 or 50 will have you feeling tired and sore. Despite my best efforts, I did go home with some sore muscles.

Reliability is one area that Taurus has struggled with in years past, so I came to the range with skepticism. Would it fire and do so consistently? I have owned this particular firearm for four months now and have to say that I have yet to experience a malfunction.  Even after spending some quality time with the rogue Cheerios in my purse, this firearm consistently goes bang. Not to mention, it’s easy to clean when a stray snack migrates to it.

Though it’s a beast when firing, smaller shooters shouldn’t discount it as an option. The Taurus’s slim design actually makes it a perfect fit for smaller hands. The grip is thin so I was able to easily get my hand all the way around it on the first grab. Also, the rubberized grip gives better control even with slippery, sweaty hands. Shooters with larger hands may struggle with the grip size, however. My husband found his pinky hanging loose under the gun. If you don’t mind spending some extra money on aftermarket accessories, the grip can be swapped out for something more comfortable. 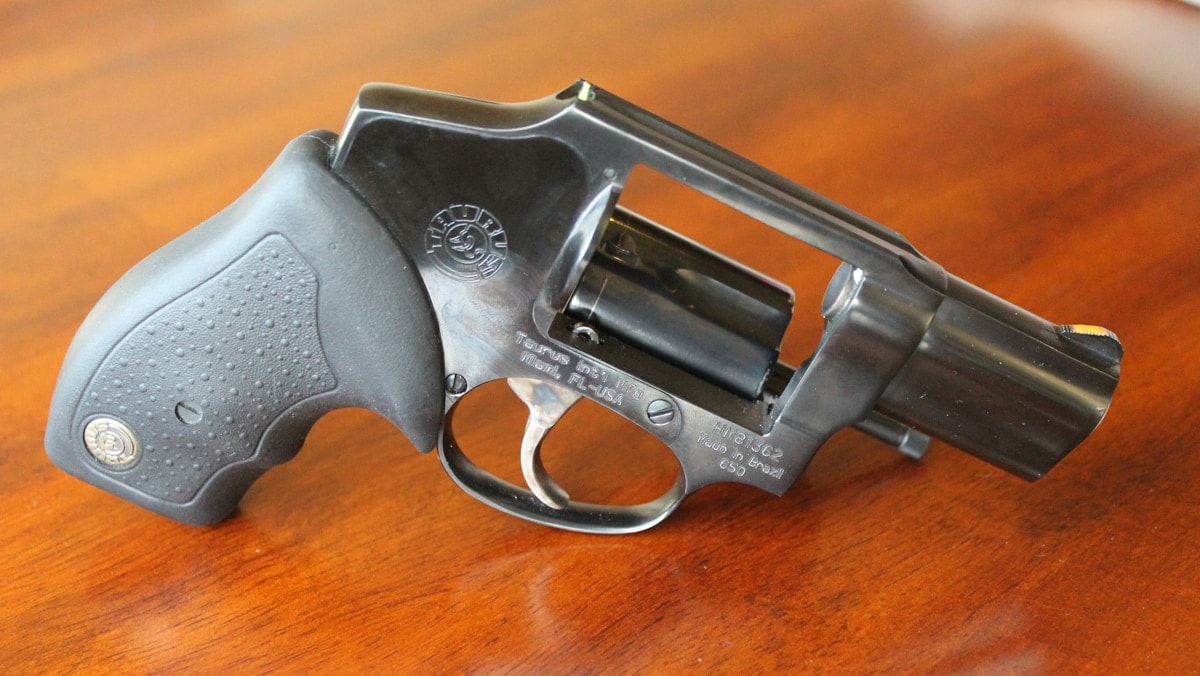 The Taurus CIA 650 revolver has fixed sights and a double-action only trigger. (Photo: Jacki Billings)

Not much bigger than my smartphone, the Taurus is roughly 6.5-inches long and sports a 2-inch barrel. Its compact size opens up the door for more concealed carry options, such as ankle, pocket or purse. Because of its compactness, I didn’t have to make any clothing concessions. In fact, a fitted t-shirt and a well-placed purse was my means of concealment on my last outing with the Taurus. 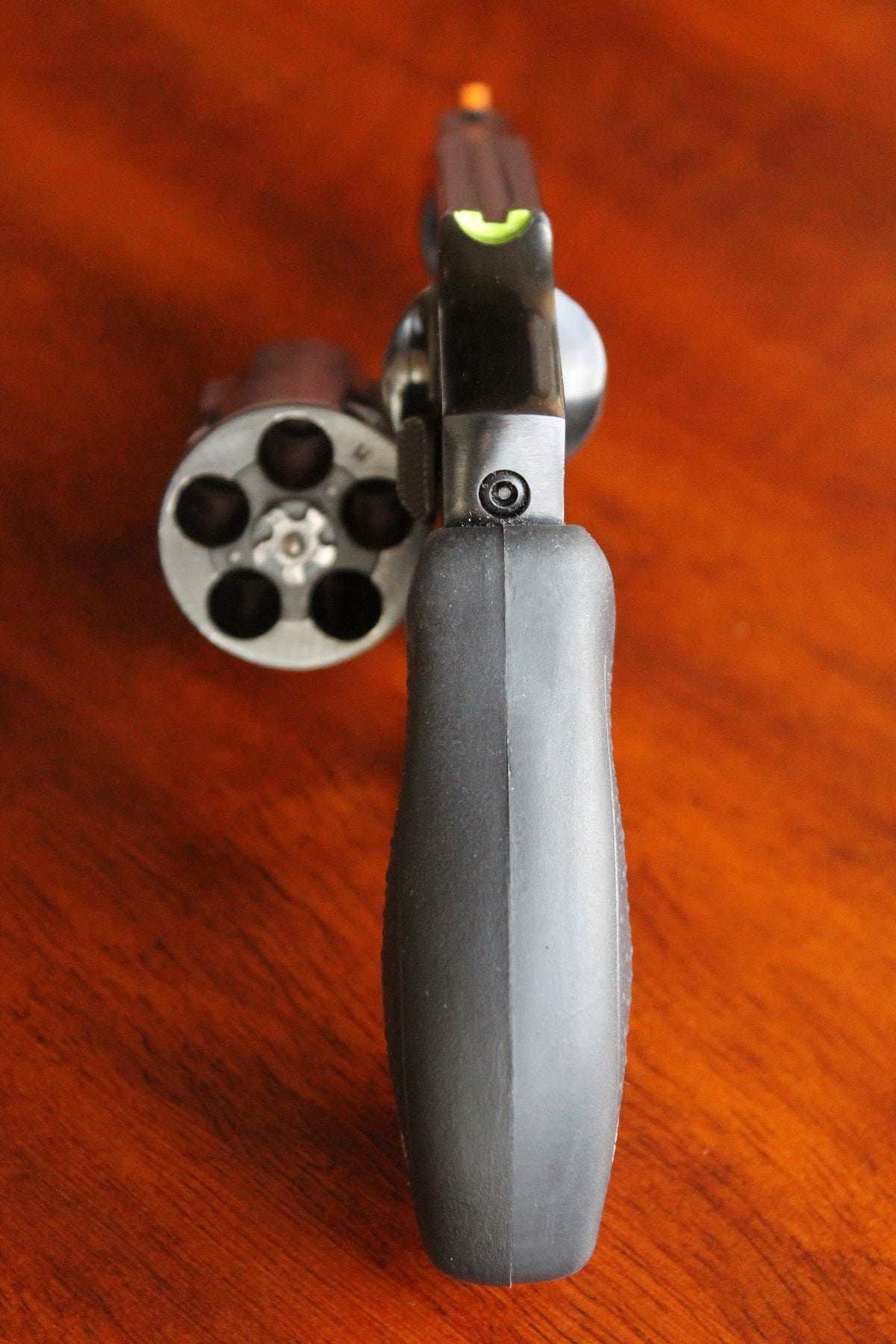 The hammerless design does well on the draw. I found my overall draw a lot smoother as I wasn’t worrying about clothing snagging the hammer. While wearing a longer jacket, I had no problems with fabric catching the gun.

I was concerned initially that the steel frame would make it noticeably heavier than its alloy competitors. I was pleased to find that wasn’t the case. Weighing a little more than a can of soda, I didn’t feel it made a negative impact on carrying. I was able to chase my kids on the playground and wrestle them into store shopping carts uninhibited. I do recommend a good belt to prevent sagging, but no need to run out and buy an expensive gun belt.

The steel does give it a solid, durable feel as well as sleeker look. I will admit, though, the frame does attract fingerprints. It’s a major eyesore for me, but that’s why I carry an extra cleaning cloth. Plus, it’s just good practice to keep your guns clean. 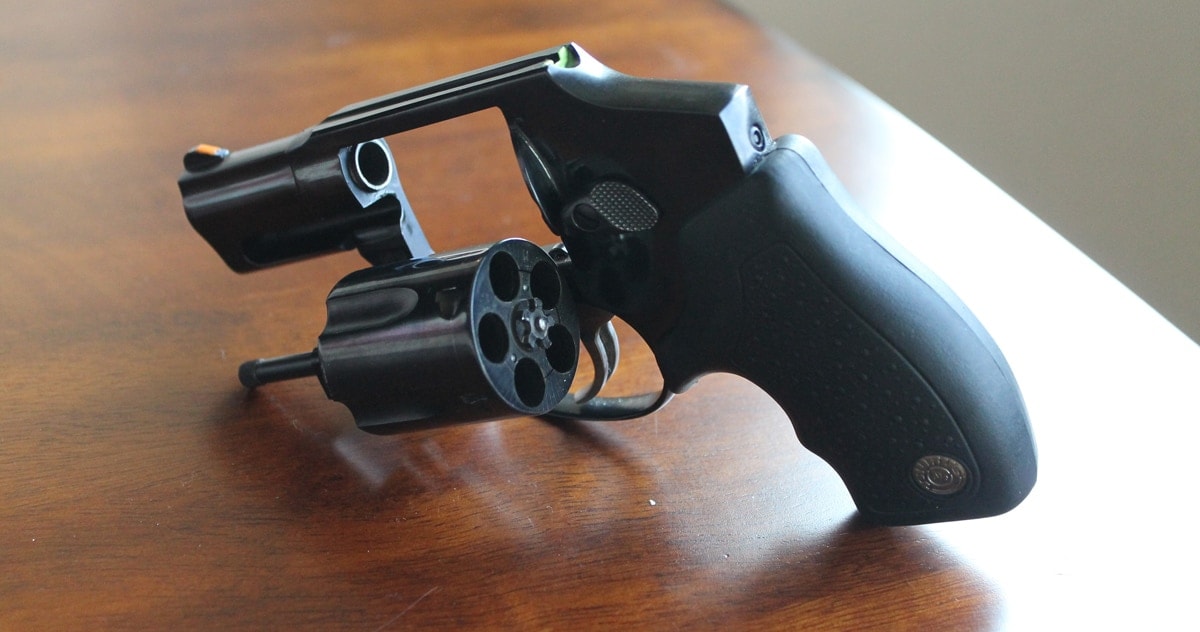 When talking concealed carry, safety often comes into the conversation. As is common with revolvers, the Taurus is devoid of a traditional safety button or mechanism. The Taurus relies on its transfer bar to prevent accidental discharge. Pair that with that long trigger pull and you’ve hit the extent of what this firearm can do safety wise.

Now what the Taurus lacks in a traditional safety, it makes up for with its “security system.” Found on nearly every Taurus handgun, a lock and key system works to secure the firearm. The key fits into a slotted hole on the rear of the gun. When engaged, the firearm cannot be cocked nor the trigger pulled.

Taurus ships two keys per handgun. I throw mine on my car keys so I always have it on me. This key works with any Taurus handgun, so if you already own a Taurus there’s no need to carry multiple keys.

This function is great if you are in a hotel for the night or you want to forgo a more traditional keyed or combo trigger lock while storing. I would not suggest carrying it in the locked position, though. Unlocking it requires inserting the key and turning a quarter turn before the revolver is ready to fire. In a self-defense situation, this process takes way too long.

If safety is a concern, practice good concealed carry techniques by using a holster that covers the trigger guard and make sure that trigger finger stays outside the guard until ready to fire.

Rebellious by nature, I purchased the Taurus revolver despite the naysayers and doubters. As it turns out, this revolver was exactly what I was looking for. The Taurus CIA 650 definitely has the power I wanted in a concealable platform all for a decent price. It retails for $555.