There’s nothing quite like perusing the seemingly endless plastic and metal tables at a gun show. As a child I remember my dad dragging me through the doors of every show within a 60 mile radius. He never needed more guns, but he enjoyed browsing the “oldies but goodies” as he called them.

My dad was of course referring to the pistols and rifles that the industry had laid to the wayside. In the years since those childhood trips, I’ve found many a gem and even a few lemons myself among the beat-up tables inside expo centers, fairgrounds and agricultural buildings.

The Taurus PT-22 was one such find. 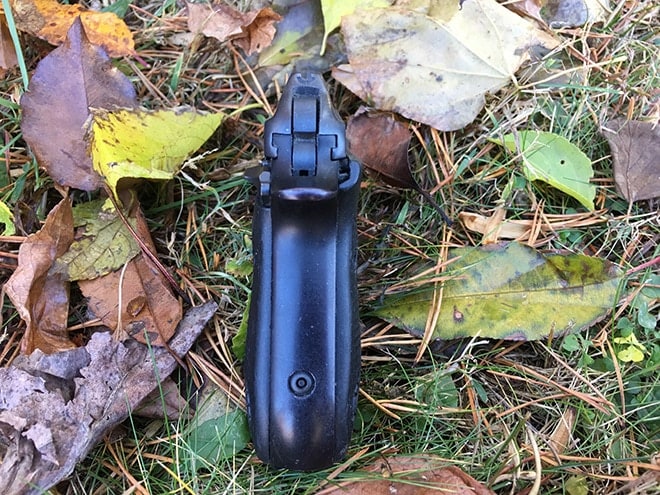 Sights are fixed and low-profile allowing for a smooth draw. (Photo: Jacki Billings)

The predecessor to the Taurus 22PLY, the PT-22 is an extremely compact pocket pistol chambered in .22 long rifle. Featuring a black alloy frame, the gun sits at just over four inches tall with a 5.25-inch length. The 2.75-inch barrel works well if you intend to take the “pocket gun” label to heart.

But what led me to the Taurus PT-22 was its width. At a mere 1.3 inches wide, it is the perfect size for my petite hands and fits neatly into my smaller grip — a plus for when I want to work on one-handed shooting. 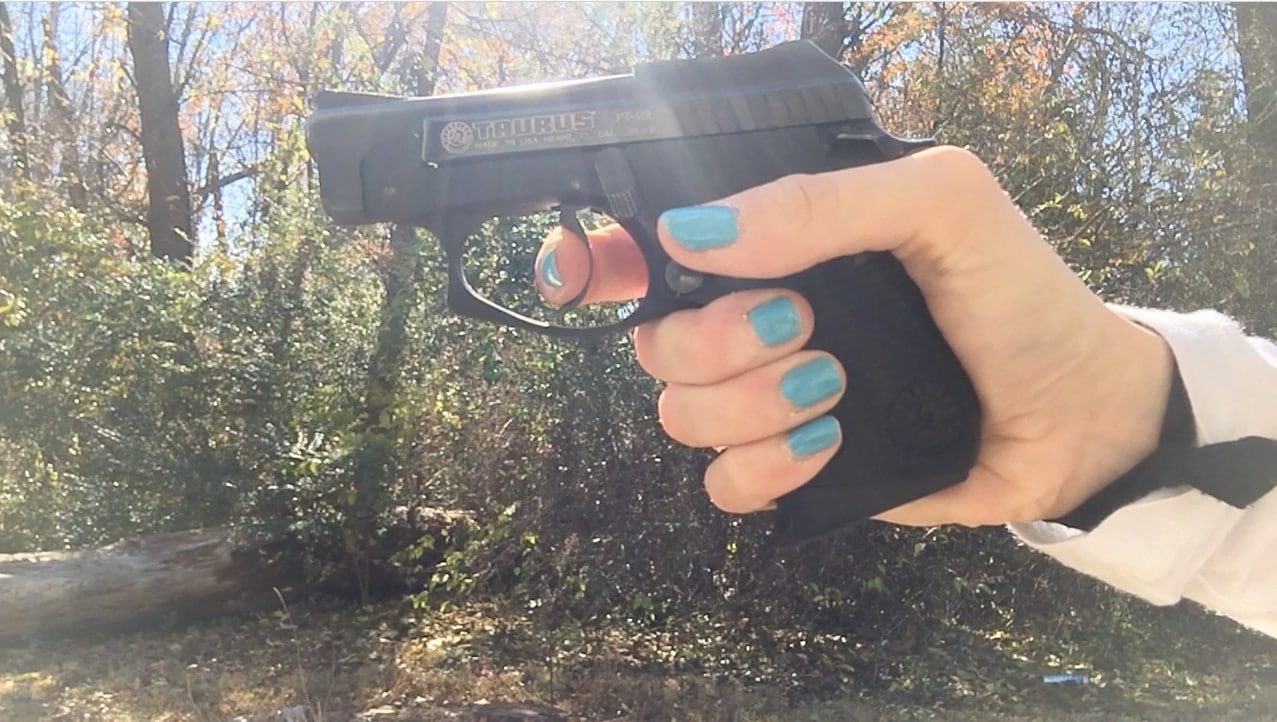 The double action only design lends itself to self defense but adds a serious trigger pull. (Photo: Jacki Billings)

However, before you assume that you can forgo a second hand, bear in mind that the Taurus PT-22 is double action. For shooters accustomed to the heavier trigger associated with DAO pistols, the pull will come as little issue. For shooters like myself, spoiled by the feather-like triggers on my Glock and Springfield pistols, the long DAO will take some work.

The PT-22 used for this review came in at a 10-pound trigger pull. Compared to my usual carry gun — a Springfield Mod.2 with a weight of 6.5 to 7 pounds — this was a major departure. 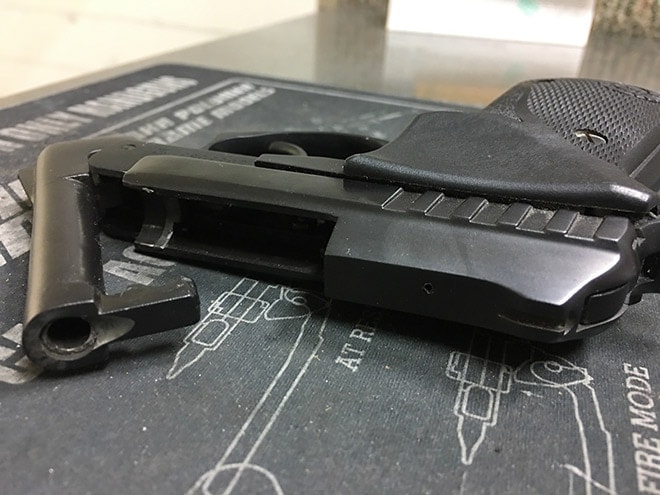 The pop-up barrel bumps capacity up to nine rounds – one in the pipe and eight in the mag. (Photo: Jacki Billings)

Making up for the lack of a lightweight trigger, the Taurus uses the always intriguing tip-up barrel, reminiscent of the Beretta 21 Bobcat. The PT-22’s barrel pops into the air with the flick of a button and is great for shooters who struggle to rack the slide on a traditional semi-automatic pistol. The release is easy to maneuver and is situated next to the trigger. Ammo slides right down into the chamber and the barrel goes right back into place with a little force. Whether I see the practicality in this design for shooters that can’t rack a slide or whether it’s because I find the barrel to be a bit of a novelty, it’s my favorite part of this gun.

Plinking away on the range 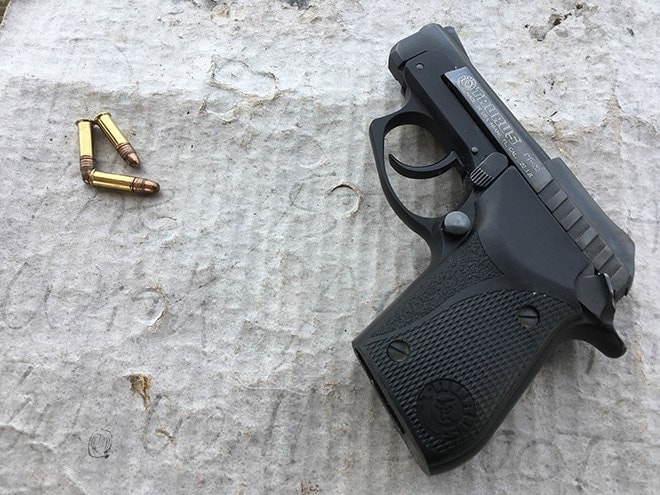 The Taurus was reliable on the range when fed the right kind of .22 LR ammo. I found CCI performed the best in the gun. (Photo: Jacki Billings)

The first time I toted the Taurus to the range, I was ready for some gun-slinging action. Ammunition was cheap so I’d stocked up on a variety. Prepared to spend hours working with the PT-22 , I ended up only shooting her in 10 to 15 minute intervals for an hour and a half before calling it quits for the day.

Though .22 plinking is always a pleasure, it gets tedious when your index finger is throbbing. That was my first adventure out with the Taurus. Subsequent trips got easier and I was able to accomplish much more as I built up strength and got used to the PT-22s design. 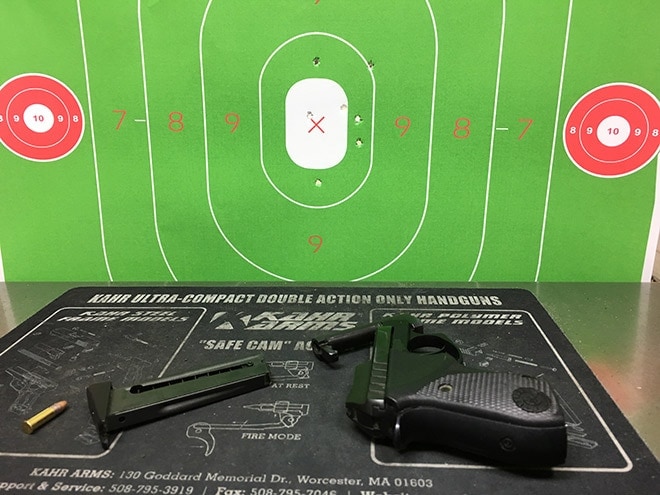 My shot placement started off well but disintegrated after that long and heavy trigger pull did a number on my index finger. (Photo: Jacki Billings)

If you’re headed to the range with this little companion, make sure you’re setting your targets fairly close to your shooting position. The size matched with the caliber ultimately means you’re not going to be taking this out to 25 yards. I found that 15 yards was the maximum this gun and I could accomplish, if I wanted to hit paper – and even that was iffy at times. I was most successful in the 3-7 yard range.

The Taurus features a fixed front blade sight with a rear notch in the back. Sights are accurate and the first few I popped off were grouped just to the right of the center of the my blazing pink target. As I continued to shoot and the DAO trigger began to get the best of me, my shots started to spread to the rest of the paper. My last magazine of the day was almost entirely emptied outside the pink and onto the black. With those results, I knew it was time to call it a day. 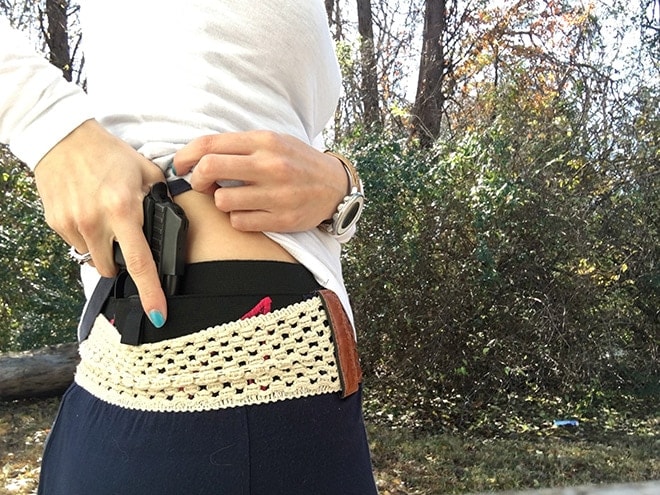 The PT-22 is a compact, pocket pistol perfect if deep concealment is what you’re after. (Photo: Jacki Billings)

In the days I spent testing and mucking around with the PT-22, I can say that I was most pleased with the reliability. It’s no secret that Taurus has had its ups and downs in terms of producing reliable handguns. I had a PT-709 in my early days of gun ownership that performed flawlessly. On the other hand, my Taurus CIA revolver’s entire cylinder fell out at my shooting buddy’s feet at the range one day. That necessitated a phone call to Taurus and a brand new revolver courtesy of the Brazilian manufacturer.

The PT-22 has served me well. I won’t lie, it’s prone to jamming (like most .22s) if it’s not fed the right ammo. Luckily, it’s not super picky and as long as I stay away from reloads (if I ever come across any) and dirty ammo, we’re good. In the testing conducted for this review over the course of a week I experienced only two extraction failures, which were solved when I swapped over to CCI ammo. 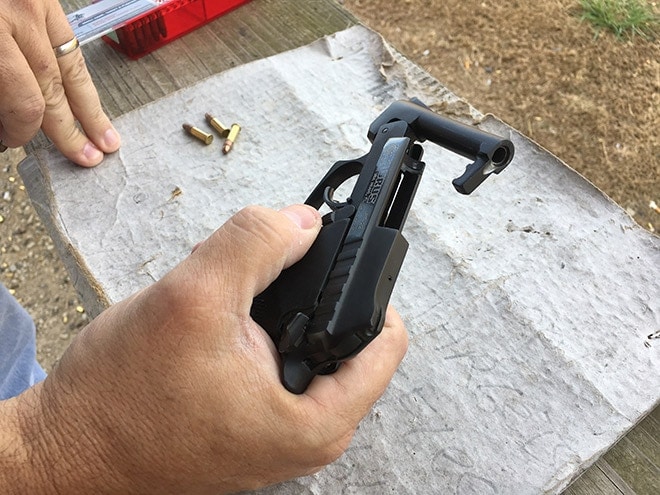 The pop-up barrel flips open with the press of the release button. (Photo: Jacki Billings)

The magazine holds eight rounds and the pop-up barrel design allows for an extra round in the chamber giving shooters a total nine round capacity. This is by no means a primary carry gun. There’s no way I’d trade this pea shooter in for a Springfield, Sig, Smith or Glock which all boast double digit capacity.

It is perfect though if you need a little boost in action and prefer to carry a second firearm in the event stuff really hits the fan. Riding inside a pocket holster, ankle rig or thigh set-up, owners can easily and discreetly carry this Taurus. 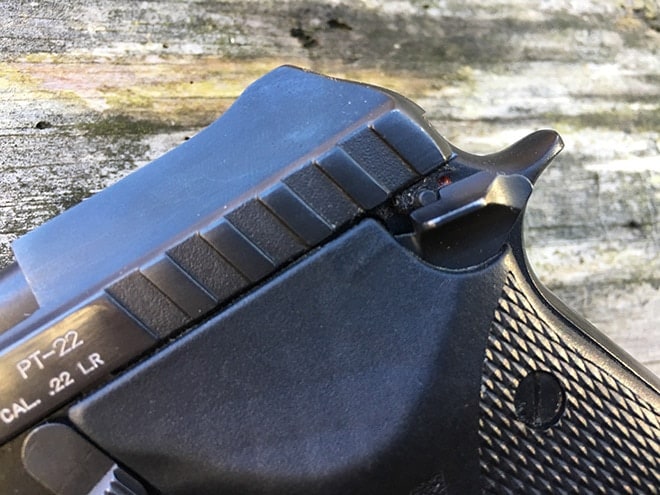 A manual safety is situated in the perfect spot to easily flip up and down with the thumb. (Photo: Jacki Billings)

For concealed carriers that refuse to carry without a safety, this gun does feature a manual thumb safety situated along the left side of the gun near the slide. It’s easy to flick off and on – just remember to do so before firing.

Again, I wouldn’t strap this in an IWB rig as my only source of firepower, specifically because of its lack of capacity and inability to go the distance, but in a pinch (especially if an assailant is right on me) it’s got enough punch to get you out of a scary situation. 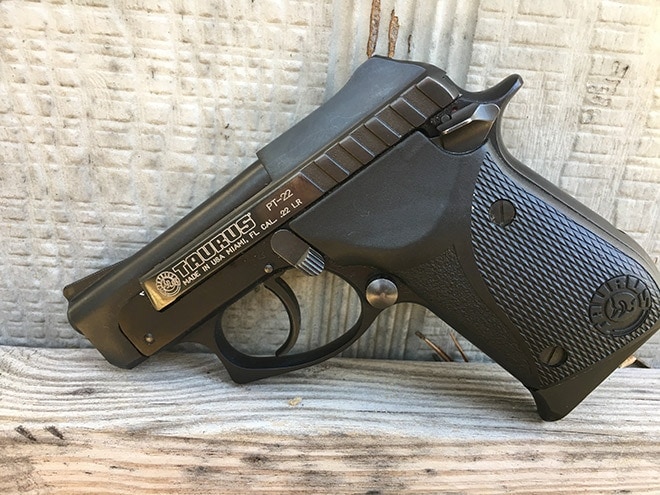 The PT-22 is a sneaky gun in the sense that it looks unassuming. Shooters looking to integrate a non-intimidating, wallet friendly gun into their life might very well settle on the PT-22. Though the trigger is not an absolute deal breaker, it may prove difficult for some.

While you won’t find me plinking all day at the range with the PT-22, it’s perfect for days when dressier events call for a thigh or ankle rig paired with a smaller pistol. In addition, if I know I’m going somewhere shady and need a little more oomph, I can look to the PT-22 to ride alongside.