The Saiga 12 is an exquisite working class shotgun.  The semi-automatic action, when combined with a magazine with any actual capacity, becomes a formidable weapon.  It is big enough to handle the recoil of 12 gauge shells.  As a large framed shooter, I find the Saigas to be more ergonomic than most tactical shotguns.

While the gun isn’t as foolproof or easy to maintain as some pump shotguns, it is built on the AK platform (perhaps the most easily maintained automatic action ever).

The basic Saiga 12 is a beast of a gun.  But it is sporterized.  These guns had been imported into the states by Arsenal.  Now importation is being handled by the Firearms Importer Manufacturer Exporter Group.  The FIME SGL 12-09 is a big step up from the standard Saiga 12.

The main difference is that the gun has been returned to its tactical roots.  The straight buttstock is replaced by a more typical AK configuration.  But this isn’t a typical AK grip.  It is flared, and much easier on the hand. 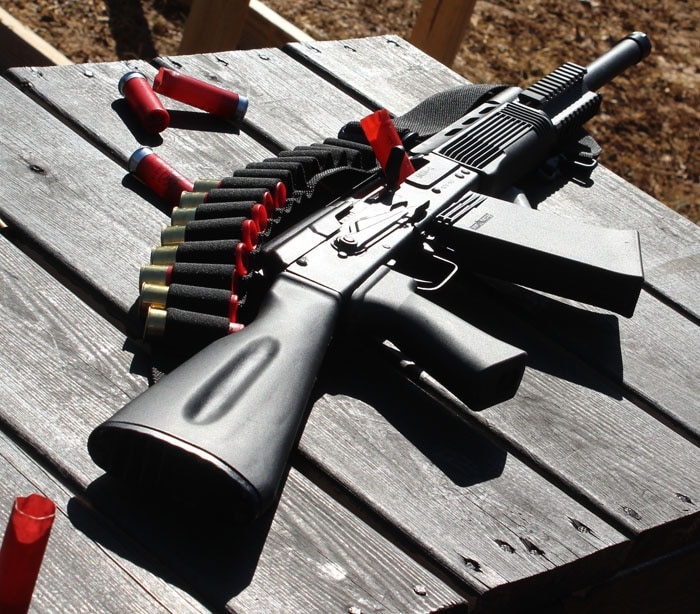 And the front end has a really nice quad rail built in.  It is far enough forward that mounting a light or a vertical grip won’t interfere with magazine changes.

The rail is also a bit lower on the front end than you would expect, which means any red dot won’t stick so far up off the top of the gun and get in the way.

The materials are what you’d expect from an Izhmash AK.  The receiver is stamped.

The barrel is finished in a nice black that provides for a maintenance free exterior.  The 19-inch barrel is threaded and chrome lined.

There is one feature on the SGL 12-09 that is uncommon for AKs.  It has a bolt hold open feature.  This makes checking for a loaded chamber so much easier, and helps with loading magazines.

After importation, the Saiga SGL 12-09 is made 922r compliant, and there are enough U.S. made parts that the gun is compliant even with its Russian made magazine.

The trigger on this gun has very little take up before a clean break.  It is a faster trigger than I’m used to on a Saiga 12, and I took a couple of shots to the nose before I got accustomed to the timing.  I’m too damn tall for these short stocks.  But this isn’t the type of gun the begs for a cheek weld.

The SGL 12-09 points very naturally.  It feels a bit like an AK-47 that’s hopped up on steroids.  And it shoots that way, too.  The kick from most shells is reasonable.  There is one moment on the video where Jacob, who helped me with this review, is shooting some 3-inch high brass goose loads.  You can see the effect of the recoil there; it flat rocks him back.  But he was shooting fast, so there wasn’t as much recovery time.  And once you are off balance, the SGL 12-09 is going to knock you back.

The Saiga SGL 12-09, once it gets warmed up good, will eat anything.  The ProMag drum will only accept 2.75-inch shells.  The Russian five round stick magazine will hold 3-inch shells.  This gives you a lot of variety to work with.  And there are many other varieties of magazines available with varying stack configurations and capacities. 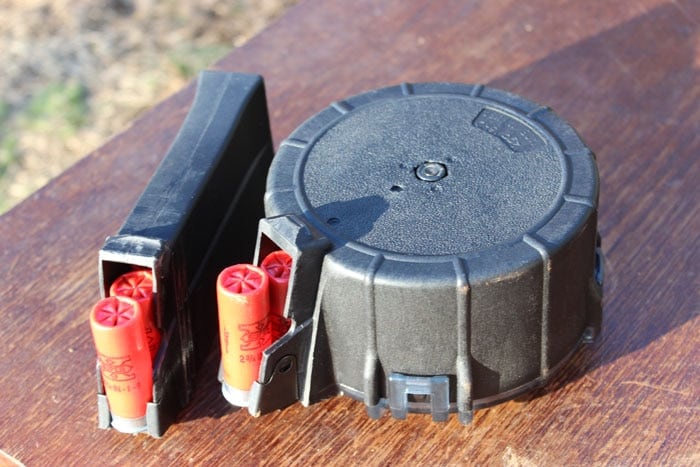 Light loads can be problematic.  They fire fine, but won’t always clear.  We experienced numerous failures to eject with low recoil buckshot and target loads that were rated around 1,100 fps.  The empties wouldn’t clear the chamber.  Sometimes the last round would stovepipe.

The Saiga has a nice gas block plug that can help to dial in the right amount of pressure.  Still, even wide open, the Saiga didn’t do well with the bulk junk.  At first. 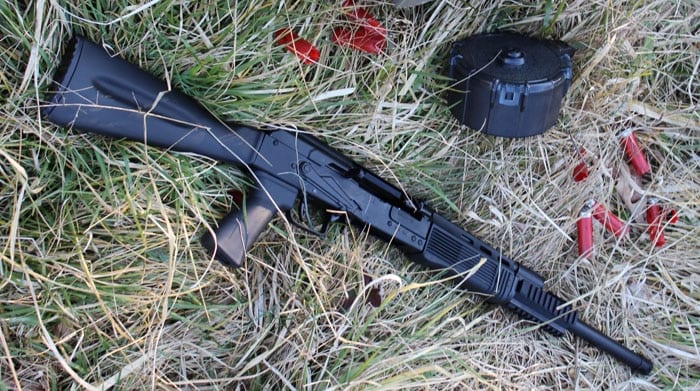 The problems really seemed to iron out after between 100 and 150 rounds, and since then the gun isn’t giving us any trouble at all.  And we never had any difficulty at all with high brass or target loads rated above 1,300 fps.

It was hard to capture on video, but the Saiga is easy enough to shoot that it even makes a good sporting gun.  I can’t shoot clays to save my life, but I got to where I could pull off shots with little difficulty.  Jacob, who is much better at shooting than I am, didn’t miss.

Issues with the Saiga

Beyond the break-in period (which I don’t think any firearm should experience), I don’t have any complaints about the gun.  The stock is too short for me, but that’s a fault with me.  One of many.

The gun is large.  And it is fast.  When I’m at the range, attempting to dust clays, I don’t mind either of those.  But I know a lot of folks are using the guns for home defense.  While it wouldn’t be as easy to maneuver as a gun like the Kel-Tec KSG, the Saiga would be a decent choice.

Its real selling point is its potential for law enforcement or military applications.  With the reliability and ease of maintenance of the AK platform, and the potential to change magazines, I wouldn’t hesitate to use a Saiga 12 as a close quarters combat gun.  The speed and available firepower are simply devastating.  I wouldn’t mind lopping about six inches off the barrel, but that’s just me.

As is, I’m having fun.  This gun is getting expensive.  The five round magazine is one thing, but emptying the ProMag drum, all in one motion (in less than 10 seconds) is beginning to make this looming ammo shortage seem all too real. 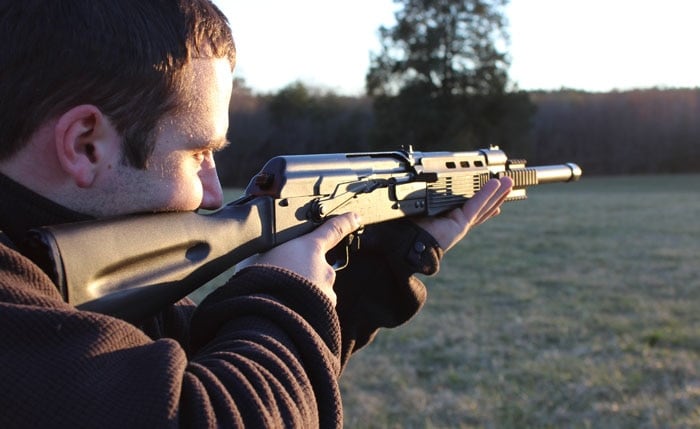 Difference between Arsenal and FIME.

There is some heated debate going on right now about why these guns aren’t marked as Arsenal products.  Arsenal had been importing Izhmash guns and selling them through their distributors, K-Var being the most well known.  Exactly who does what once the shotgun arrives stateside is what is causing so much consternation.  And the point of some serious debate.

It seems that some who bought Arsenal Saiga guns and rifles were delivered guns marked FIME Group, without any mention of the switch from retailers.  As far as I can tell, the kerfuffle concerns resale value and not quality.  Shotguns, for example, marked Arsenal or Saiga Legion, are now marked Izhmash and FIME Group, but FIME Group doesn’t have the brand saturation or reputation of Arsenal.  Not yet.

Looking ahead, I don’t think this will be a problem.  The guns, despite their markings, are identical.  And FIME and Arsenal are working together, and with the same people in Russia and with the same distributors here.

For their parts, here are three official responses to actual customer inquiries.

From Arsenal:  FIME Group is the importer and manufacturer of firearms and they are the new partner for the Izhmash factory. Currently they are working very closely with us, to include using our parts and I think they got left over boxes and targets. Their firearms are exactly the same as ours and I have been impressed with the few I have seen around town. Their rifles are the same one that we were importing, the only change really has been that FIME Group is importing them instead of Arsenal Inc. They will continue importing and manufacturing the SGL series line of products with the same high quality components and according to the original technology.

From FIME Group: Thank you for contacting the FIME Group regarding our SGL line of rifles. We are Izhmash’s new official partner in the U.S. Saiga Legion has been incorporated into the Izhmash factory and the rifles they are producing are of the same original Legion technology. The only thing that has changed is the name on the receivers. We have a close working relationship with Arsenal, Inc and will continue to use their U.S. made components in our manufacturing so you can expect the same high quality and standards. Thank you for your interest and your support.

From Atlantic Firearms: FIME Group has been around for a few years and is not new. Legion and Izmash have been sister firms for years. There was a shake up in the Izmash Arsneal earlier this year with a supposed bankruptcy etc, so they have restructured and also gotten a new head of operations. We are not aware of any structural differences in the rifles other than the markings.

So there you have it. Check out the guns from Arsenal, FIME Group, and K-Var.  They’re fantastic.