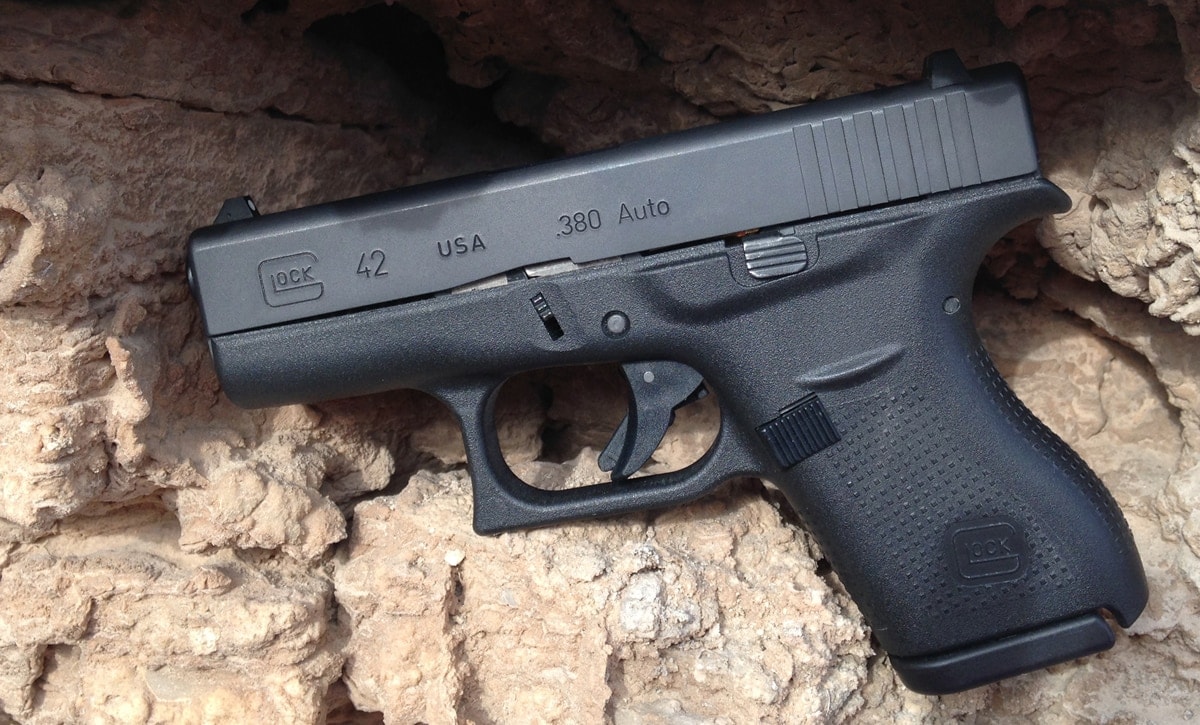 One of Glock’s first entry into the single-stack market has been on the scene for almost a year now, and has been one of my two everyday carry guns for almost as long. This is a one-year retrospective on this sub-compact handgun, which has had range time with me and a handful of students, as well as a workout in a local IDPA a backup gun match.

The 42, chambered in .380 ACP, with 6+1 round capacity, fills a niche in the small-frame pistol market that will make some frustrated users of this genre very happy, with a couple precautions.

For the shooter with medium or small hands, the 42 has the sweet ergonomics of a full-size pistol in a small package. This rare advantage is due to its big-pistol features. The magazine release is full size. The trigger guard is roomy enough to shoot with gloved hands. The floorplate of its six-round magazine, at 0.25-inch thickness, adds just enough length to prevent that “no place to put my pinky finger” dilemma common to many small-frame pistols. At the same time, the floorplate has no molded hook to make the gun less concealable or uncomfortable in concealment.

This ease of handling this little pistol carries over to firing. With a sight configuration just like the larger Glock line, it proves remarkably easy to shoot at greater-than-average self-defense distance. Hitting an 8-inch circle at 10 yards was easy to do, nearly as quickly as I can muster with a full-size handgun.

Trigger operation and reset are fairly crisp, without the annoying long, heavy trigger pull of many similarly sized guns. Of course, we may thus conclude that the G42 wasn’t made for the consumer with poor trigger-finger discipline. The ease of shooting accurately with the 42 certainly places it above its peers where trigger operation is concerned.

Concealabililty and ease of operation make the G42 a worthy choice for personal protection. Of course, there is no perfect firearm and the G42 does have a couple minor caveats. The small caliber can be compensated for, somewhat, by selecting one of the high-quality .380 defense rounds on the market. The well-regarded, though pricey, Hornady Critical Defense 90-grain cartridge performs well in the 42. While round capacity is low but on par with market competitors, its tidy magazine design makes it easy to carry a spare.

It was in the exploration of FMJ choices for this gun that my training partner and I found a glitch. Winchester white box, 95-grain ammo feeds well, as does Remington 95 grain.

Recently I loaded up with Fiocchi 95 grain and experienced a 50 percent failure to fire rate in a 24-round trial. My training partner took the same ammo in his own 42, which also runs well on Winchester and Remington, and experienced the same issues. Mine had numerous failures to extract of a couple varieties — mostly double-feeds with a spent round still in the pipe, plus two stovepipe malfunctions. His, with the same Fiocchi load, displayed numerous out-of-battery malfunctions. This occurred consistently with four different magazines. Both guns went back to running flawlessly, with the same magazines, when we shot again with the aforementioned FMJ loads.

Ammo “dietary preferences” are, in our lengthy experience with Glock’s double-stack products, are uncharacteristic of the brand, but quite pronounced with the G42.

I’m a believer in carrying the biggest gun one reasonably can. The Glock 42 in .380 ACP offers big-gun feel and accuracy in a package that can be carried with ease in most any mode of attire.  It truly is the little gun that could.