Contextualizing the Thompson isn’t easy.  It was developed at the end of World War One.  There were no guns like it.  While there were machine guns, most were huge, heavy, and they fired rifle ammunition.  Soldiers on all sides carried bolt-action rifles into battle.

But battle had changed.  There was a distinct need for a weapon with higher capacity, a more rapid fire action, and more maneuverability.  Rifle ammunition wasn’t necessary either, as many conflicts were happening at shorter ranges.  Trench warfare was the norm, and soldiers often found themselves turning corners and facing the unknown.  Best to hose down the unknown with as much lead as possible.  Thompson dubbed his new gun “the trench broom.” 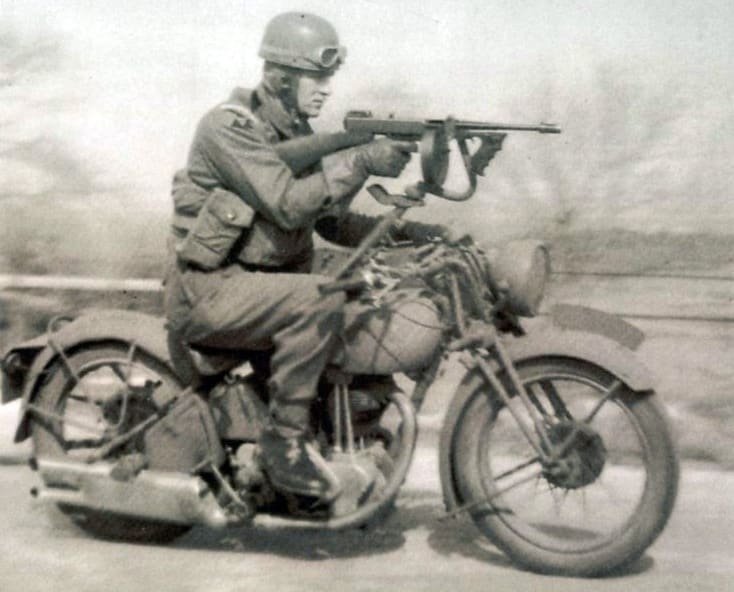 The gun made it into production in 1919, too late for the war for which it was designed.  But there was much more to come.  The gun was popular during prohibition.  So popular that it has become a cliche.  The cops liked it.  Criminals liked it.  Hollywood loved it.  We would fight in a number of other wars, and various versions of the Thompson would see action, and garner high praise from those who fought with it.

But the Thompson may be most important in two very different roles.  The first, and the hardest to quantify, would be the gun’s role in popular culture.  I think the Thompson is one of the biggest reasons why people are so reactionary about automatic weapons, and assault rifles.  This leads to the second role of the Thompson, and that is as a crucial footnote in the development of assault rifles (most notably, the Kalashnikov).

Movie villains (and some real ones) love the terror that the Thompson causes.  Yes the early guns were effective, devastating weapons.  But the visual aesthetic of the gun, especially when it is equipped with the high capacity drum magazine, served as a prohibition era tool of terror.  I think it is very similar to the distinctive profile of the AK-47 and the curved magazine and how it incites hysteria today.

But let’s look at this gun.  Auto-O is owned by Kahr, which is in Massachusetts.  They’ve taken over the manufacture of the Thompsons and are doing an excellent job with it.

The Thompsons come with a couple of options. Barrel length, stock configuration, and magazine capacitive are the main choices.  The T150D denotes a full sized Thompson Model 1927 A1 with a 50 round drum and a 30 round stick.  The D stands for deluxe.  The barrel is 16.5 inches, and the whole gun comes in at 41 inches.

These guns are strange.  They are heavy, close to 13 pounds, and milled from steel.  The finish work on the steel is rough, which is suitable for a Thompson, which was always a bit rough around the edges.  There are heavy tool marks on some of the steel.  The edges of the receiver are sharp.  The bluing is decent, and the wood is all finished well, though there are some places where the fit of the wood to the steel is not as fine as I had expected. 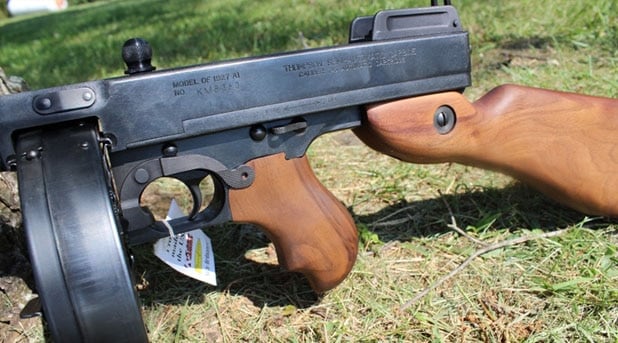 But I have to remind myself that this is a Thompson.  I can’t judge it by the price tag.  The MSRP is $1,668.  Guns in this price range are usually finished perfectly.  But there is more steel in a Thompson than there is in a Chevy these days, and steel is expensive and difficult to machine.  It is rough, but it is more gun.  And after a day at the range, I was so enamored with the Thompson that I found all of its faults to be endearing. 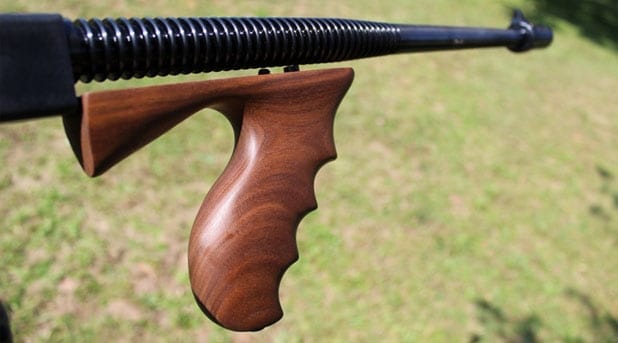 Let’s talk a bit about the closed bolt design on the new Thompsons from A-O.  It has one distinct advantage: when you pull the trigger, the gun fires (assuming that there’s live ammunition in the gun, and such).  The open bolt had to fall, strip a round, chamber it, and then fire it — all after you pulled the trigger.  This delay was perceptible.  But it added to the character of the old gun.

It also made loading easier.  The bolt must be back in order to load a magazine, and that isn’t easy.  This is a stiff action.  The bolt hold open is a very subtle little piece of steel up inside the magazine well.  Pulling back the bolt and engaging the hold is not easy at all, much less practical.  Attaching the drum magazine is even worse, and requires the use of a “third hand,” a little piece of metal that fits in the magazine well to help mechanically. 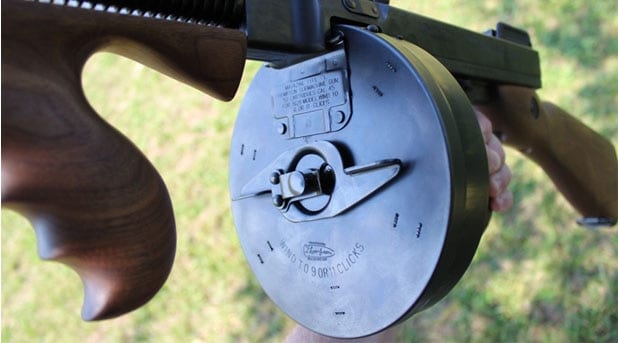 The open bolt also allowed air inside the chamber.  Over heating isn’t such a problem in the semiautomatic version of the Thompson, and Auto Ordnance has kept the distinctive fins on barrel that allow for air circulation around a greater surface area of the barrel.

Why did they make this change?  I’m not sure.  The open bolt is only really useful (and popular from a design perspective) on full autos, where each stroke is, in effect, a slam fire. If you are looking for accuracy, the open bolt idea is a hinderance.  The delay, however slight, takes some getting used to.  These new closed bolt Thompsons work like every other rifle.

And they are really accurate.  They have two sets of rear sights.  One is a crude notch useful for close up work.  The other is a Lyman style peep sight designed for longer range work.  The video shows some of this.  We were shooting from 30 to 75 yards with no problems that we didn’t create for ourselves.

I like this gun.  I want to be clear about that.  But I had some issues with it that I feel deserve some ink.  I have read some reviews of this gun that just heap on the praise and never mention anything negative.  Or worse, some reviews claims that nothing went wrong, ever, that these guns worked like Swiss clocks.  I hope that that is true.

I will say this.  The magazine is hard to load.  The gun would only feed ball ammo.  I had several feeding issues.  It never fed the last round from a magazine.  It sometimes picked up rounds and tried to feed them sideways.  It extracted great and shot to point of aim exceptionally well.  But it likes to be clean and very well oiled. 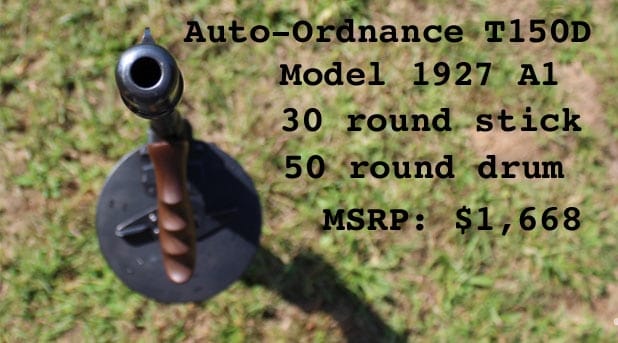 But these are not problems.  I like the gun so much, I am willing to consider them quirks.  I’m more forgiving of the Thompson because it is a fun gun, a tactile history lesson.  It is not a hunting gun, and it has limited self defense uses.  I can clear a jam at the range, no problem.  And once I found the ammo it liked (which wasn’t hard — any brass cased, 230 FMJ ball) it worked without a hitch.

If you haven’t ever shot a Thompson, it is an experience worth having.  The full auto versions are hard to come by, and expensive to run.  But these new guns from Auto-Ordnance are as solid as they come.

Special Thanks to Bob Lawman, owner of Firearms Novelity, the range where we’ve been doing our shoots.