We’re taking a look at the economic end of the tactical shotgun market in this review.  TriStar, a Missouri based importer, specializes in imported pistols and shotguns that work well and are priced very low.  In my neck of the woods, TriStar’s shotguns fly off the shelves.  And if the good-old boys in the heart of Virginia are buying the guns, TriStar must be doing something right.

TriStar imports the Tec-12 from Turkey and what makes this gun somewhat unique is its dual action.  It can be run as a semi-automatic or as a pump.  This versatility is typically found in guns like the Benelli M3 that cost a whole lot more.  Now I’m not going to pretend that the Tec-12 can hold a candle to the M3.  But I’m not going to pretend that I can afford an M3, either. 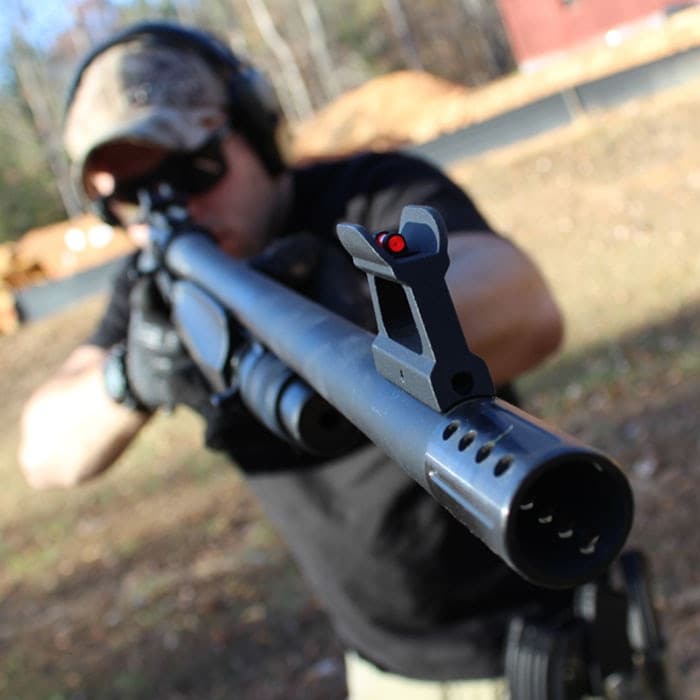 The Tec-12 certainly has the tactical look. (Photo by David Higginbotham)

Let’s knock out the basics.  The Tec-12 is a long shotgun.  It measures close to 43 inches.  The barrel is 20 inches, before the additional extended choke.  Beneath the barrel, the tube holds five shells.  This is an all too common feature on tactical shotguns that could (and should) have longer tubes.

Yet it keeps the weight down.  The Tec-12 weighs in under 7 1/2 pounds, empty.  For a gun this size, that is light.  The weight reduction comes from an aggressive use of polymer.  The receiver and the barrel are steel, but the rest of the gun is very effectively comprised of mixed materials.

The pistol grip is very comfortable.  It is fat and squishy.  After a couple of hundred rounds, I had no noticeable pain in my hands at all.  The forend is textured enough to grip, though a good pair of gloves certainly helps.  I really like the ergonomics of the gun.  Even the way the Tec-12 shoulders is well thought out.  The angle on the buttstock keeps the receiver a bit higher and allows for rapid target acquisition. 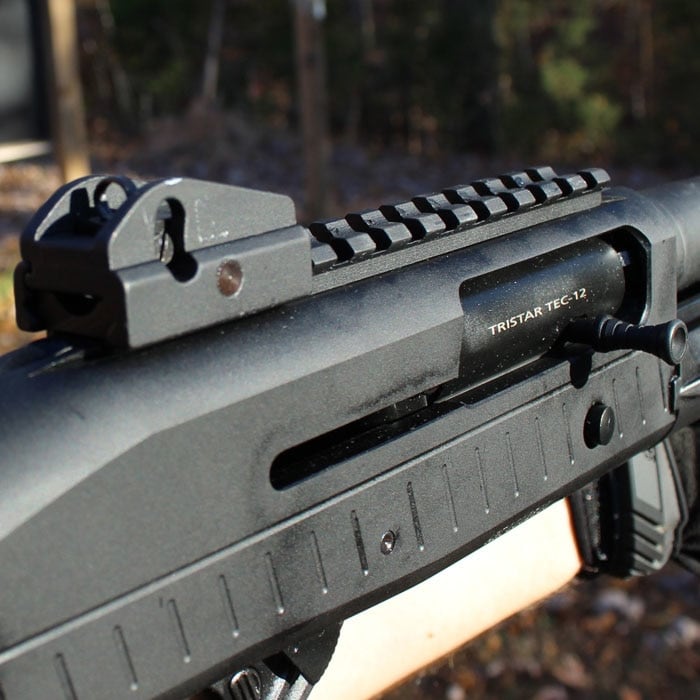 The rear sight is solid. (Photo by David Higginbotham)

The sights on the Tec-12 are interesting.  The rear ghost ring is solid.  It mounts on the Picatinny rail and is easy to remove if needed.  The ring itself is open, like it should be.  I can’t complain at all about the rear ring.

The front sight, though, is not as solid.  It is tall and has a nice red fiber optic insert that glows as it should.  The wings on top are adequate to protect the front blade.  Yet the whole sight is simply pinned in place.  There’s not much actually holding it secure.  As it is tall, the sight is prone to getting snagged or bumped.  If this were my gun — not just a review gun — I’d immediately address the front sight.  It seems to be the one weak link on the Tec-12.

The semi-automatic action is very easy to engage.  There’s a locking ring at the end of the forend that snugs tight with a simple twist.  The forend then is stable and won’t move.  We shot several different types of ammo through the semi-automatic action, trying to get the gun to fail.  It didn’t have a problem with anything except a 3 inch, low recoil slug, which it had trouble ejecting. 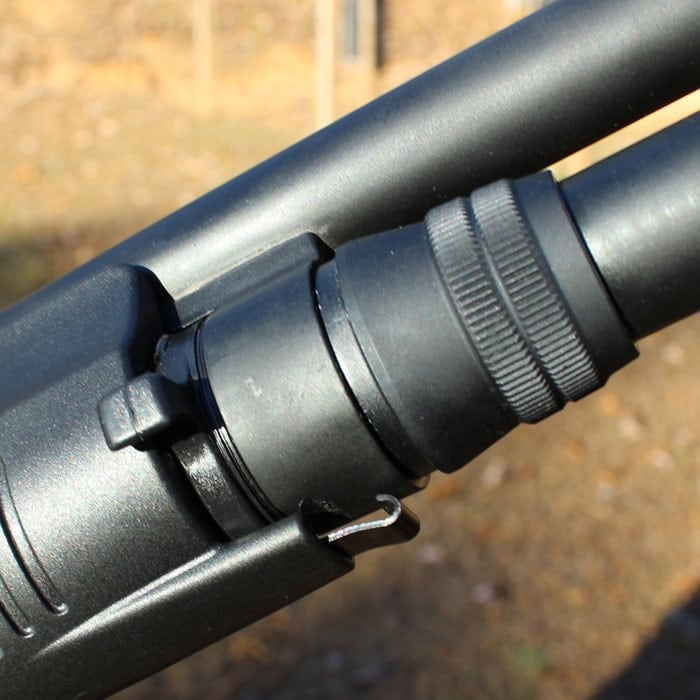 The locking ring on the forend. (Photo by David Higginbotham)

Even underpowered 2 3/4inch target loads cleared the chamber well enough.  I think the longer 3-inch shell, which didn’t drive the bolt all the way back, was just too much for the remaining clearance in the chamber.  Larger powder loads from 3-inch shells cleared with no problems at all.

One very interesting bit about the gun, and one that we spent some time sweating over, is that the forend doesn’t lock forward when shooting in pump mode.  I’m a Mossberg pump man.  Jacob, who does most of the shooting for these reviews, prefers the Remington 870.  We both have a habit of hauling back on the forends of our pump guns to both stabilize the current shot and get a leg up on the next.  When the trigger is pulled, the gun goes boom and the slide rockets back.  It is a snap.  But not on the Tec-12.

The TriStar’s pump doesn’t lock forward.  If you shoulder the gun and put any rearward pressure on the slide, it pulls the gun out of battery.  There are springs behind the bolt pushing it back in the other direction, but it will ease back.  This produces an interesting effect.  By interesting, I mean potentially dangerous.  When the bolt is slightly out of battery, the hammer will still fall (if you pull the trigger).  Even if it isn’t going to fire the shell (and who’s going to volunteer to test that one), it would mean a missed opportunity.  As this is a tactical shotgun, that could be deadly. 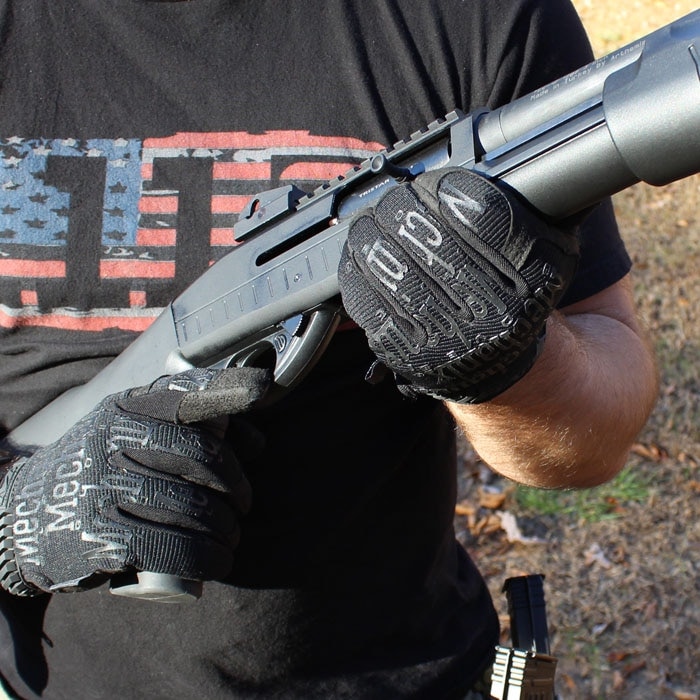 The barrel gets hot. Glove help. (Photo by David Higginbotham)

There’s always more to the story, though.  We shot up a mess of shells doing this review.  Most of them were fed through in semi-auto.  The ones we did shoot with the manual action fired just fine.  We had no missed opportunities, or out-of-battery misfires, or any problems.  And the pump is sure to extract and feed anything you throw at it.  The problems I’m imagining could be possible with the current configuration of the pump are only hypothetical.

TriStar, to their credit, has lots of warnings about not firing big loads through the pump.  It is there specifically to run lighter loads, low recoil rounds, or underpowered less lethal options.  What happens if you fire an overpowered 3-inch shell through the gun in pump mode, as the directions clearly say you should not do?  We didn’t go there.

In semi-auto, the Tec-12 is fast.  We ran several steel challenge stations with the Tec-12.  The combination of the action and sights make it great for tactical use.

The Tec-12 would also be a good choice for some basic sporting uses.  I know that isn’t what it’s meant for.  I get that.  But this is a fun shotgun.  The Tec-12 is very comfortable.  With the right optic on the Picatinny rail, this could be a good fun-gun for shooting clays.  A Burris FastFire, for example.  With the giant front post and the rail behind, the gun is much harder to use for clays than a traditional shotgun.  You simply can’t sight down the barrel. 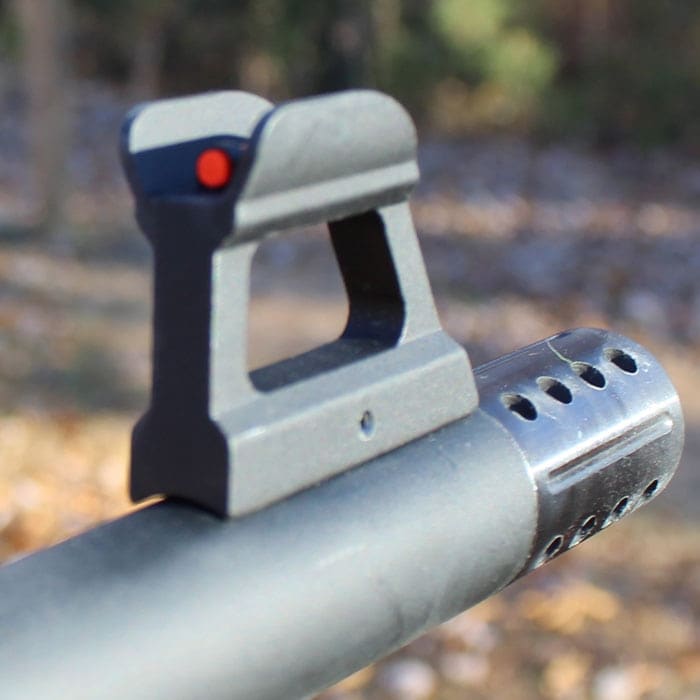 The pin on the front sight seems needs attention. (Photo by David Higginbotham)

I tried my hand at a couple of clays, but couldn’t hit anything.  Jacob could connect, but not with the reliable results he gets with sporting guns.  Still, shooting clays is a great way to judge reaction time and how well sights work for moving targets.  The fiber optic and ghost ring are great for accurate placement of slugs, the ghost ring is an excellent approximation of a buckshot spread at 25 yards, but the current configuration is just not suited for anything that flies.  That should be obvious to everyone, including me, but I had to try it anyhow.

This gun is fantastic.  If my review seems like I’m on the fence at all, it is because I’m trying to figure out where it fits in the broader world of tactical shotguns.  If I had to choose between this gun and my Mossberg 590, I’d go with my Mossberg.  I don’t, though.  This gun is more than capable of handling a variety of tasks that a traditional pump won’t do as quickly.  And it is more fun to shoot than the 590.  If nothing else, the Tec-12 is much easier on your shoulder.

In the end, it comes down to the dual modes of operation.  The semi-automatic mode is ideal for cranking out hot loads and putting lead down range.  The pump can be engaged to really open up the bottom end of the power spectrum.  If you have to have tactical potential on a not-so-tactical budget, the Tec-12 is a great choice.  The gun retails for just over $500.

In all, this is an incredible gun for the price. (Photo by David Higginbotham)

A longer version of the gun (without the pistol grip) is available with a 28-inch barrel.  I haven’t put my hands on that one, but it might be a great field gun.  With an even longer barrel, it should produce tighter patterns.  And then the pump would be an obvious fall back.  No more worrying about dirt or mud gumming up the works.  Flip the ring and muscle it through.

There’s a place in this world for companies like TriStar.  They import economic guns that work hard, do their jobs, and don’t complain about being kicked around.  When you pony up for a TriStar you won’t be paying for a brand.  You’ll be paying exactly what the gun is worth, or maybe even a little bit less.