The debut of TriStar’s three-gun trap lineup of shotguns kept their booth constantly buzzing at Shot Show 2016—and now we have one in our hands.  Can the company known as budget experts build a specialty shotgun worthy of competition shooting alongside much bigger name-brands and pricetags? 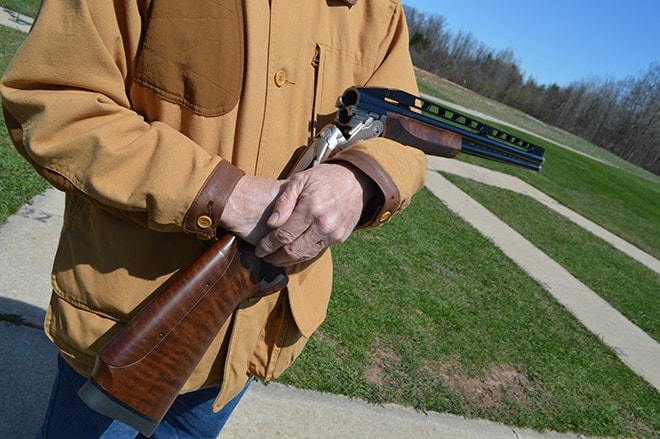 Budget pedigree aside, this TriStar is a classy looking gun. (Photo: Kristin Alberts)

The staff at TriStar Arms was proud to debut their dedicated trap gun options just a few months ago, and now the guns have hit the shelves.  The TT-15 line is available in four variations for discerning clay shooters: Top Single, Unsingle, Double O/U Trap and Combo (Unsingle and Double Trap barrels). 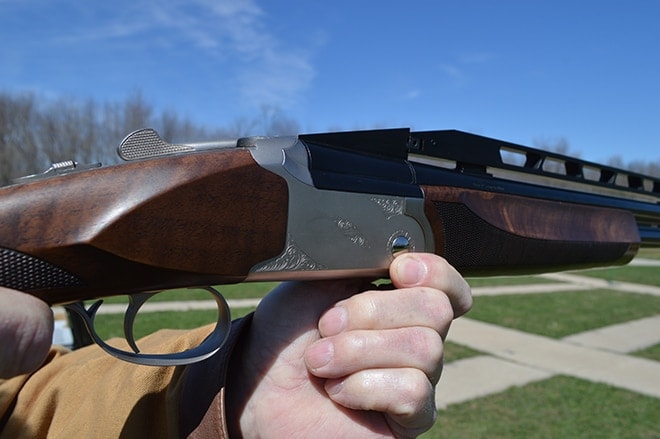 Believe it or not, the TT-15 line has been a long time coming, and has been designed by and for competitive shooters. It’s difficult to pair the terms “budget” and “specialty” gun, as the features needed to build such a dedicated trap gun generally drive the price into the multiple thousands. However, TriStar’s TT-15’s are loaded with features including a high-standing raised target rib with three adjustment points, adjustable comb, right palm swell, red fiber optic sight and color-coded extended Beretta/Benelli mobile chokes in a hard choke case.  While the O/U comes with five tubes, the single barrels include three each. 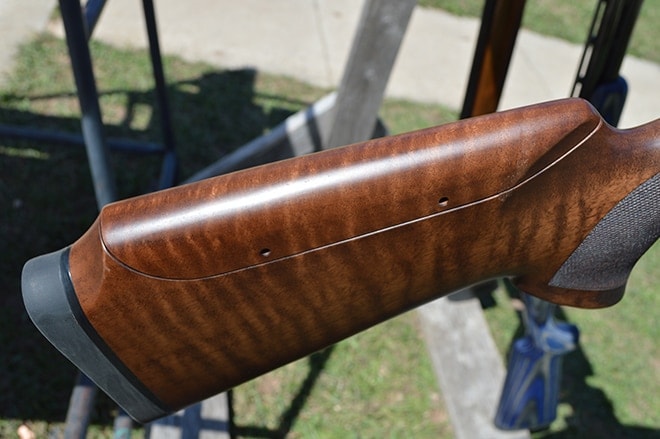 With US headquarters in Kansas City, Missouri, TriStar’s Turkish built shotguns have a strong customer service record.  Like all TriStars, the TT-15’s come with the standard five year warranty. 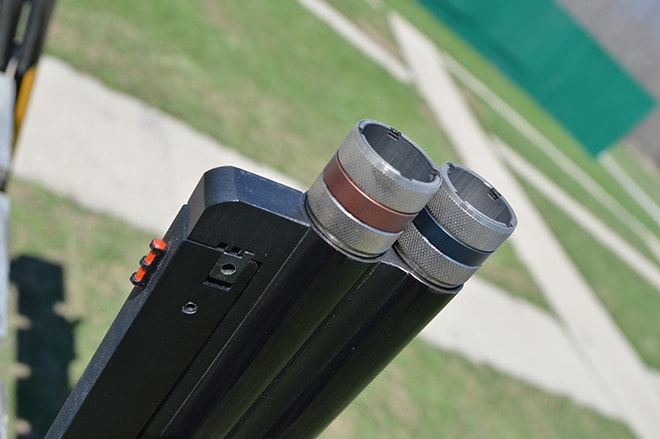 The price makes TriStar’s TT-15’s accessible enough as entry level guns, but built with the features needed to compete at the highest levels.  Our test O/U came with five extended choke tubes in Cylinder, Improved Cylinder, Mod, Improved Mod, and Full in a small, black hard case with a wrench.  Both color coding and printed markings on the tubes make identification a snap.  The wood on our test gun has nicer figure and finish than we expected at the price point. 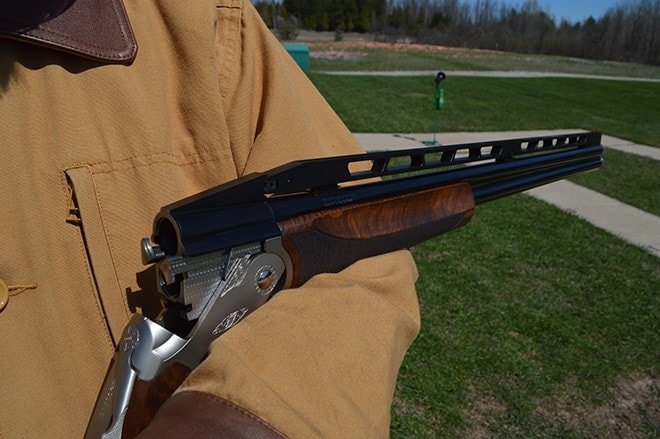 Stock adjustments to both comb and cast-off are simple with the included tools.  While we spent substantial time and targets getting the rib and stock in the ideal position for each shooter, adjustments were surprisingly simple.  The rib can be set in three different height slots at both the muzzle and breech.  Double locking screws keep the rib from rattling upon closing, as many adjustable ribs are prone.  TriStar includes a baggie full of shim washers for the stock adjustments, and both comb rise and cast had plenty of  travel. 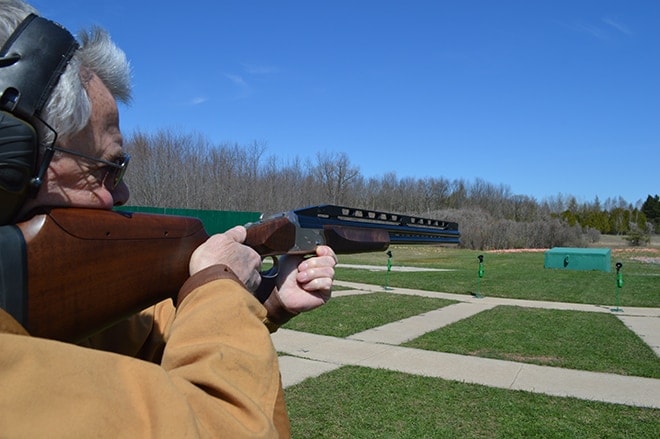 Our test gun had been through the hands of several other reviewers before arriving at our doorstep, and that prior testing no doubt included many hundred rounds.  After we added our 400-500 rounds, the gun was certainly looser than new, but not at all the worse for wear.

One of our only knocks comes in the packaging of the gun.  The TT-15 Trap came in an unbranded black box, similar to other TriStar shotguns, but without any logos.  We would like to see, at least as an option, a hard case or more user-friendly box, though certainly there are concessions to keep the cost down.  Likewise, the pad is run-of-the-mill but gets the job done. It could be easily upgraded with something like a Morgan pad.

On the trap field 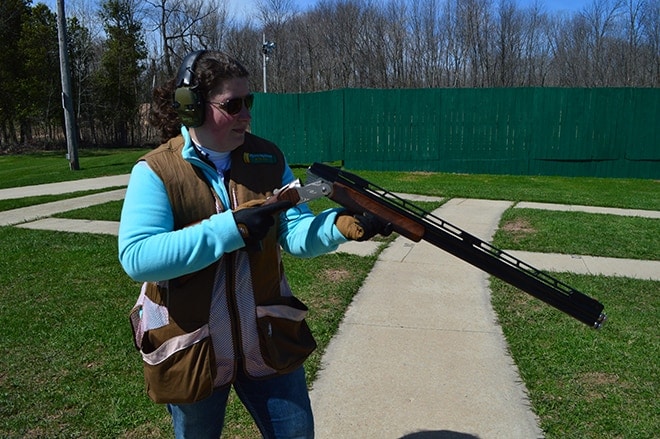 On the line. (Photo: Kristin Alberts)

We spent several days on the trap range with this gun and several competitive shooters and each was able to hit well with the TT-15 after fitting the gun.  Does the TriStar have the fit and finish and attention to every detail as those guns?  Of course not, but it doesn’t have the price tag either.

I have long shot single barrel trap guns, and usually have them shortened to around a 13.75-14” LOP.  At 14-5/8” both myself and one male shooter found the TT-15 on the long side, and due to the generous length of the adjustable comb, trimming the stock would be difficult.  One could always swap for a thinner pad, of course.  Unlike many sporting shotguns that allow trigger travel adjustments, the TT-15 does not, though we would not be surprised to see that option on future sporting options. 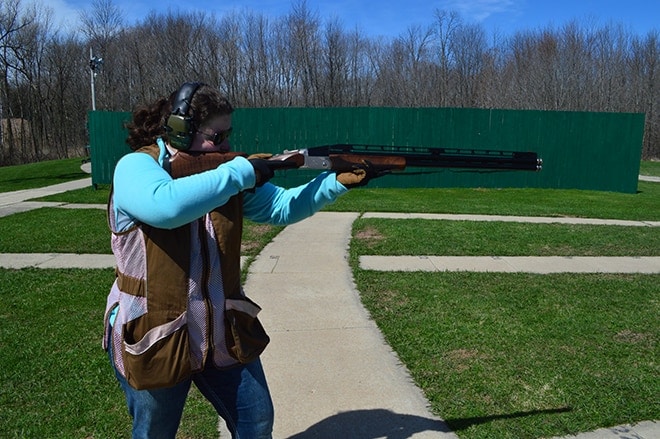 Though obviously built for trap, we also took our Double Trap to the sporting clays course.  Even with its build geared toward rising trap birds, we were quite successful.  The gun swings well, is balanced, yet its weightiness eats up recoil.  The right palm swell fills the hand just enough to feel natural, but makes life miserable for lefties. 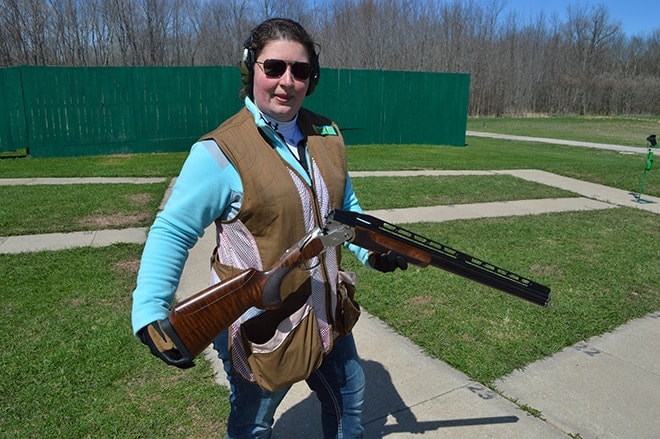 While we were skeptical that TriStar could successfully mate their pedigree as the Budget Experts with a feature-loaded specialty sporting shotgun, our TT-15 Double Trap test put that worry to rest in a pile of broken birds.  These guns will be equally at home on the smallest trap thrower with a beginning shooter as they will on the competition handicap line.  Having a shotgun that can be completely customized to the individual makes better, more successful shooters. Even if you don’t know what you’re doing at the trap, the TT-15 will make you look good doing it.