Once, I got to sit in the driver’s seat of a Ferrari. With hands on the wheel and foot tentatively resting on the gas pedal, it was thrilling to imagine that piece of engineering—and SPEED—being under my command.  A similar feeling came over me when, as a student in a precision rifle marksmanship class taught by STA Training Group of Peoria, Arizona, a Surgeon CSR (Compact Sniper Rifle), chambered in .308, was set in front of me. After spending two days behind this gun, I feel like I drove the Ferrari—and it’s a darned good feeling. 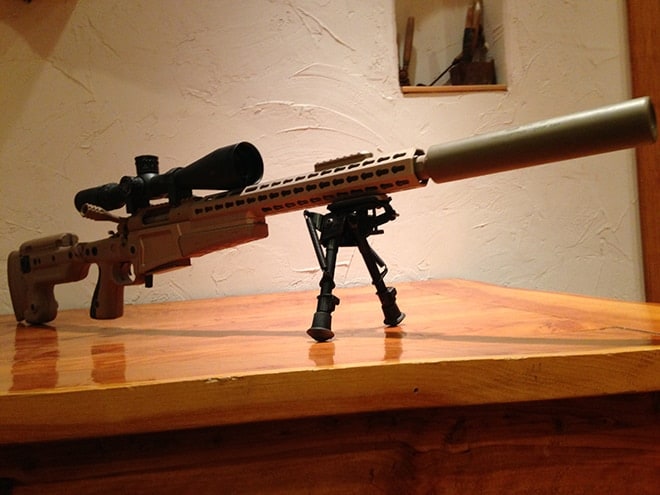 Surgeon Rifles was founded in 2004 by Oklahoma “gun guru” Preston Pritchett. His innovative designs caught the attention of Strategic Armory Corps of Arizona, which also owns other products put to the test in this memorable class.  Every model in the brand is produced by an extremely high-tech process called wire electrical discharge machining, or wire EDM.  A short video explaining the hands-off, precision process is available here.  The manufacturing method creates a receiver, including the rail over the chamber and the recoil lug, that’s only one piece. If there’s another company building rifles this way, I’ve not heard about it. 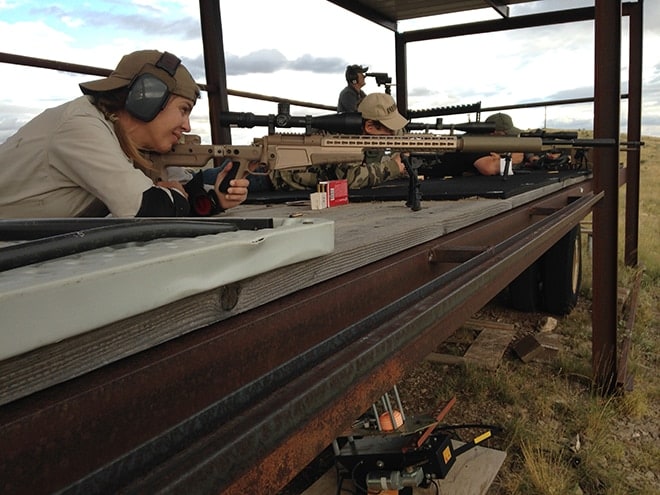 Another trait I noticed was the heft of the rifle.  Despite the relatively short 16-inch barrel, it’s heavy. The upside of this weight is stability—felt recoil is minimal.  The stock folds back on itself with the press of a large pin, making the rifle easy to carry. Some will probably scoff at the idea of a short barrel on a tactical precision rifle.  Little did I know that by the end of two days, I’d be convinced that barrel length has little to do with the ability to deliver rounds exactly where desired.

The model I used was fitted with Surgeon’s custom pineapple-shaped and textured (they call it tactical) bolt handle—a $47 accessory.  It gives excellent leverage and enhances operation of the already elegantly smooth bolt. 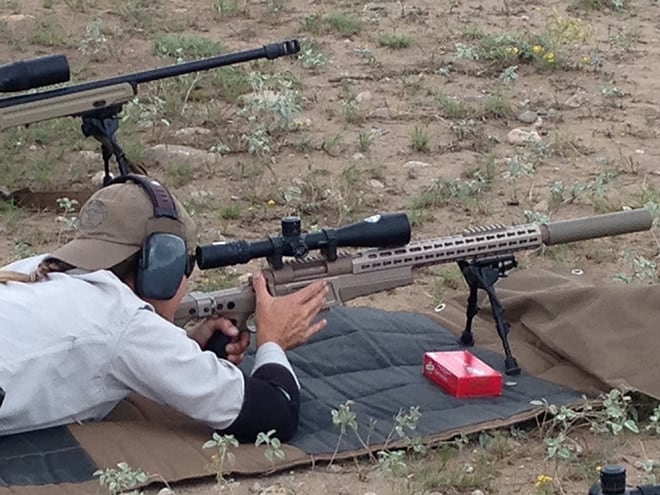 With the help of STA instructors, the CSR was perfectly fitted to me as a shooter.  A generous length of Picatinny rail allows for plenty of eye relief adjustment, in coordination with the shock-absorbing butt of the stock, adjusted to a comfortable length for shooting from prone.  The perfect cheek weld was found with the adjustable cheekpiece seated all the way down to the stock.  The cheekpiece raised substantially for a custom fit.  This excellent stock is produced by Accuracy International. 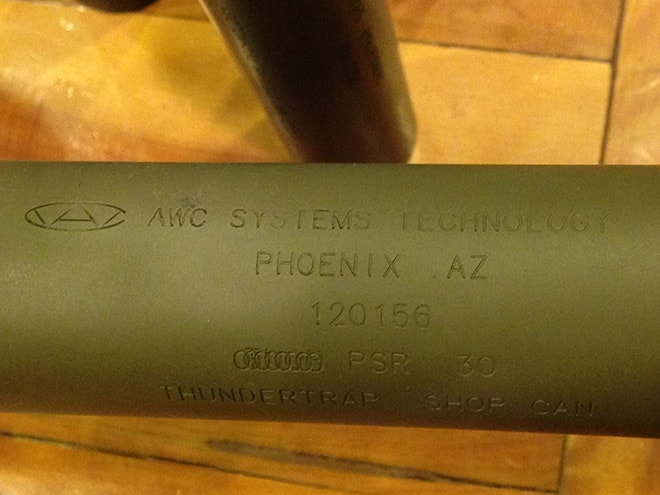 The five- and ten-round box magazines were easy to load, efficient to remove, and functioned well, even after several hundred rounds fired in sometimes dusty conditions. The 2.5-pound Jewell trigger is exquisite, with virtually no slack.  Another advantage of the wire EDM process is the presence of a rib-like structure in the chamber that makes the space smaller than that of, say, a Remington 700, and keeps rounds from getting stuck in the chamber when hand-feeding them one at a time.

The rifle package included an AWC suppressor, which made life easier for my neighbors—and made my experience better as well, as on the firing line I was usually situated beside another CSR shooter and/or a man using a Surgeon Scalpel long action, chambered in increasingly popular 6.5 Creedmor, also suppressed. 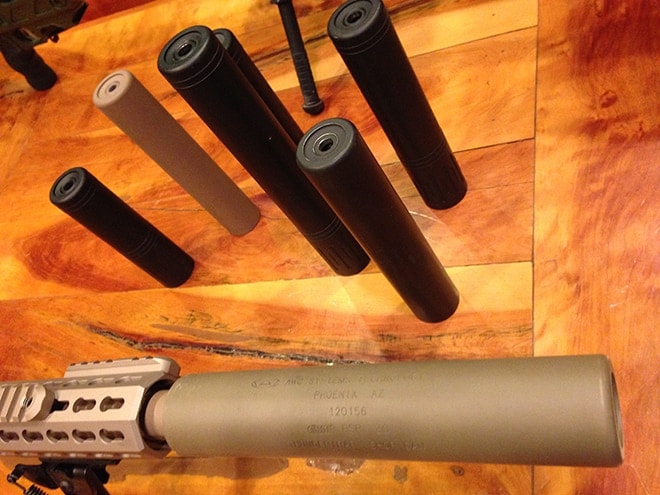 A selection of AWC suppressors, including the one on “my” Surgeon CSR. (Photo: Team HB)

A NightForce compact scope, with powerful 5-35x-maximum magnification, made targets invisible to my naked eye clear and crisp.  This was my first experience with using milirem (mil dot) ranging rather than minutes of angle (MOA).  Thankfully, the instructors assisted with navigating adjustments in view of the Horus reticle. A couple of other folks in the class had scope adjustments marked in MOA while the reticle was marked in mils.  Though the mil system was new to me, it was nice to only have to deal with one set of numeric variables on the optic. 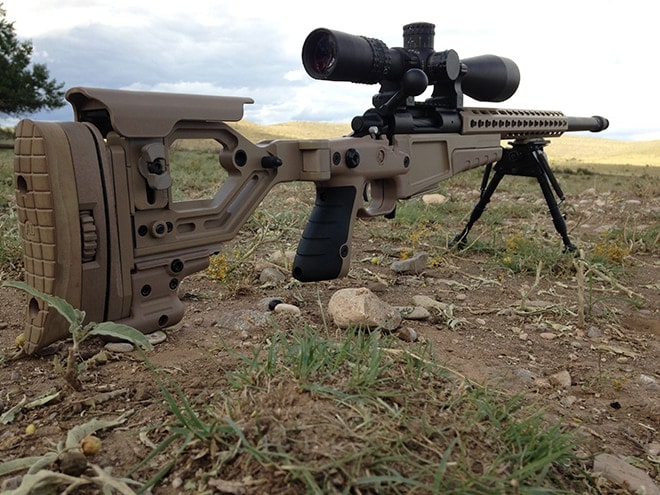 The NightForce’s advantages became clearer when we began ranging and shooting beyond 500 yards, and I could watch my neighboring shooters’ rounds rock steel in sufficient detail to judge the nature of hits by the angle the targets swung when hit. Wow.  Back home, I became an even bigger fan of this optic brand upon watching the company’s torture test video on their homepage. Being one who’s a little rough (it sounds better than “clumsy”) with equipment, knowing this optic will maintain zero after being whacked against a railroad tie, thrown through the air for multiple hard landings, and having the adjustment knobs screwed with, brings peace of mind.  NightForce helps the potential scope buyer wade through a sea of technical nuances by providing an online reticle calculator that matches optics to one’s typical shooting conditions. 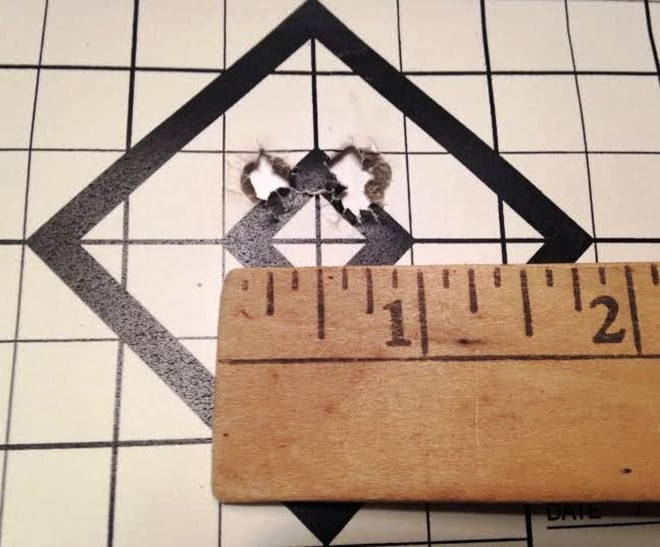 Meanwhile, back on the shooting platform, STA instructors assisted those of us on the line with windage adjustments as we added holdover information on our DOPE (data on previous engagements) cards, gaining about 100 yards of distance with each successive turn shooting. As a left-handed shooter, I’ve never felt more comfortable running the bolt, and eventually making minor elevation adjustments on the NightForce without breaking cheek weld and my view through the optic.  This incredible system and I, with instruction, became one. 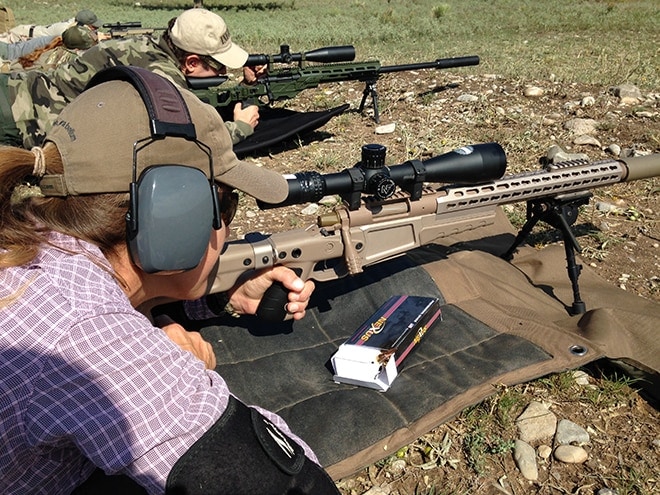 With a little verbal guidance, I located, then zoomed in, on a 36 x 36-inch plate at 900 yards.  POP! went the suppressed shot—then a little wind—then PING, steel rang out. Instructor Jerod Johnson called “send it” as I stayed on target, and got that rewarding PING twice more.  It felt like I was riding Cloud Nine, and one corner of my mind nagged me to quit on a high note.  But thanks to this incredible rifle package and quality instruction, higher clouds would be within reach just minutes later. 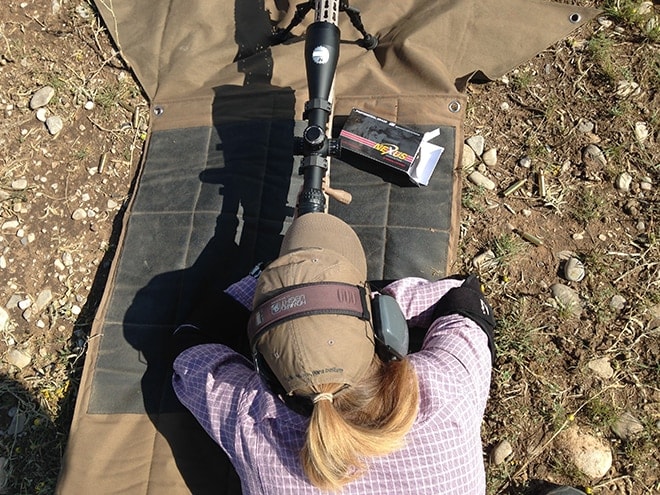 “Now,” said the instructor, “see where that creek bed meets the hill in front of it at the base of the big hill?  From there, go up to the left about 45 degrees.”  With the NightForce on lessened magnification, I followed those instructions and soon found what looked to be a tiny piece of steel.  I zoomed up to 35x—still tiny.  No time to fret, though, as I was soon following the instruction, “hold two mils left.  Send it.”  POP.  Silence.  “On,” I called the shot that looked and felt fine.  “Hold one-and-a-half mils left,” came the response.  “Send it.” I exhaled and pressed the trigger. POP.  After about six tries, I got that aw-shucks feeling from the sound of nothing but desert wind in the distance after pressing the trigger. But then, my buddy PING showed back up.  And twice more, easily, in the consistent breeze.  Three hits at one thousand yards.  Though I couldn’t see that level of detail even with the NightForce, Johnson informed me the hits occupied about a nine-inch group—less than a minute of angle.  Wow.  For me, this was Cloud Nine.  Still is. 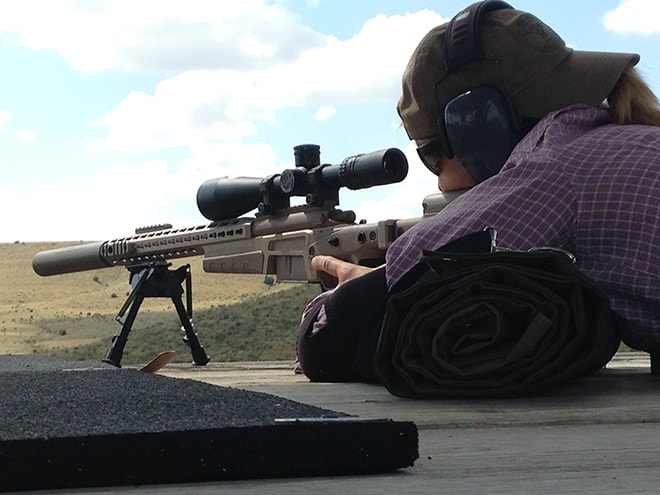 My minor feat would be repeated by every member of the class—all but one of whom were also using a loaner Surgeon rifle, Nightforce optic and AWC suppressor.  Two shooters, one on a personally owned .300 Winchester Magnum and the other, a long-range shooting hobbyist behind the previously mentioned Surgeon Scalpel chambered in 6.5 Creedmoor, kept going.  After considerable effort (the wind wasn’t helping at this point), both aced the 1,250 yard target.  The Scalpel shooter, having had a slightly easier time at 1,250, set his sights on the 36-inch square plate a full mile away.  It took several minutes to get the elevation and windage adjustments done.  But he too, with this high-performing package, managed three hits a mile away.  It made for a celebratory ending to the two-day excursion with this incredible equipment. 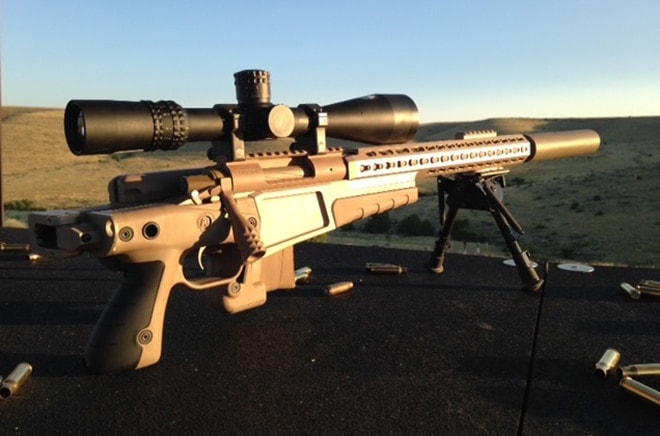 The CSR stock folds with the press of a button. (Photo: J. Klingshirn)

I’d be remiss to not mention that, inside 500 yards, we were issued Black Hills match grade ammunition.  On day two, when distance shooting was added, zeros were re-checked using Nexus match-grade ammunition, another Strategic Armory Corps product, for which .308 loads cost $28.72 per box.  This was the non-subsonic variety. My gun’s zero required no readjustment from the Black Hills to Nexus ammunition.

The other accessory that made this experience a success was the easy-to-use, highly adjustable Harris bipod. It folded easily for transport, and each leg is adjustable from six to nine inches to get the perfect level position, even in imperfect conditions. “Bipods with legs that shoot inward make no sense,” explained Johnson, and his wisdom became apparent as I was able to get a level set-up fairly easily in a rock-strewn cow pasture.  Harris bipod legs “reach” for the ground and adjustment is just a matter of letting go of a button when each side of the rifle reaches the desired height. 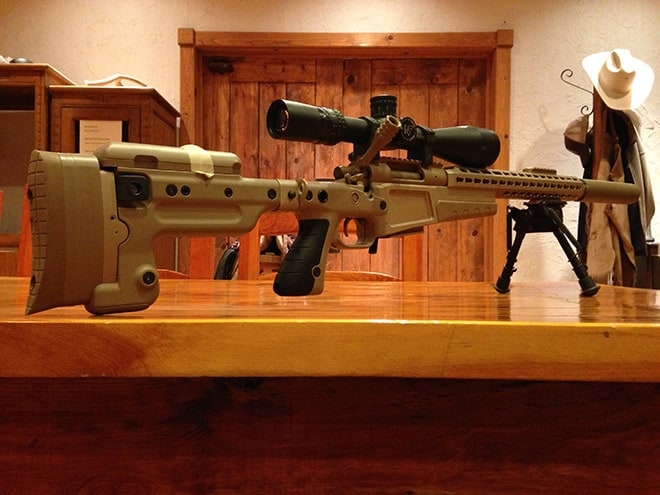 The CSR is a thing to behold. The tape and material on the cheek pad were placed there by the instructor as an indexing aid. (Photo: Team HB)

This high-tech, high-performance package of the AWC Thor Thundertrap suppressor (around $1,700) optic, Harris bipod ($125), NightForce scope (around $2,000 depending on model), and the inimitable Surgeon Rifle (around $5,500 or higher depending on model—there are no CSRs in stock as of this writing), is priced according to quality.

The Surgeon is a Ferrari among rifles. For the serious sportsman, police or military sniper, and competitive or hobbyist long-range rifleman, Surgeon Rifles and these components are a worthy investment for tough-as-nails tools that function with reliable precision.  I consider it a privilege to have spent time with the Surgeon CSR.