Original Colt Walkers revolvers are rare and valuable, and Colt only made 1,100 back in 1847. They are probably not safe to fire due to age and even when new the cylinders were prone to rupture. Also, the museum curator it was “borrowed” from might get mad. Well, if you can’t shoot the original, take the next best thing: The Uberti Walker.

The good, the bad and the ugly

Gun makers in Italy have been making reproductions of classic American firearms for decades. They originally made them to supply props for the Spaghetti Westerns. They have it down.  The reproduction of the Colt Walker by Uberti is a prime example.  It is almost identical to the original.  From the weight and length, the faulty design of the loading lever catch, to the etching on the cylinder, it is very close.

But with an MSRP of $429 it is considerably less than the hundreds of thousands of dollars an original Colt Walker would sell for now.

A fistful of pistol

The Walker is a monster of a handgun. Some say it was the most powerful until the .357 Magnum was developed in 1934. The Walker was designed to use 60 grains of fff black powder behind a 142 grain round ball or a conical bullet. This load will produce around 1,000 to 1,100 fps. For comparison the .45 Long Colt was designed to use a maximum of 40 grains of black powder and the 45-70 uses 70.  The Walker is a beast.

Shooting the Walker is an experience one does not soon forget.  The smoke from 60 grains of black powder is massive.  If you are at a public range be polite and stand downwind of the other shooters!  However, recoil is surprisingly mild.  It is not the sharp jump a .357 makes, but rather more of a slow push.  This is due to the slow burning black powder and the almost five pounds a fully loaded Walker weighs.

Even with its massive weight the Uberti Walker feels good in my hand, I wouldn’t want to hold it on target for a long time, but it balances surprisingly well.

Once upon a time at the range

Capt. Samuel Walker wrote of the Colt that carried his name, it is “as effective as a common rifle at 100 yards and superior to a musket even at 200.”  I have not fired a Walker at either of those distances, but I have at 25 yards with very good results.

The sights on a Walker have a small front blade and a V notched into the top of the hammer.  From my range notes I was able to get an average of 2.5 inches at 25 yards.  With some experimenting, conical vs. round ball, different powder charge, I’m sure the Uberti is capable of better.

The price of power 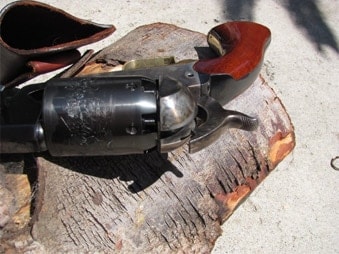 The original Colt Walkers had some issues that were later both fixed with the Colt Dragoon model.  The first, and one that the Uberti has do to being an exact copy, is the loading lever.  The recoil from the Walker will sometimes cause the lever to drop down keeping the cylinder from rotating to fire the next round.  Users of the originals field improvised a fix for this with a small piece of leather to hold the arm up when firing.

The second problem was due to the metal used in the originals.  It is reported that about 20 percent of the original Walkers experienced a cylinder rupture.  This could be from the quality of metal that was available in 1847 or it could be user error.

In 1847 revolvers were very rare and were foreign to the soldier they were issued to.  It has been speculated that some of the failures were caused from loading conical bullets upside down. The reproductions from Uberti do not have this issue.  Modern materials and knowledge of metallurgy make the new walkers safe to shoot.  Although, I wouldn’t try loading the bullets upside down.

The Uberti Walker is an almost dead on reproduction of the original from Colt.  I say almost because of the use of modern materials, which is a good thing.  These are great pistols that are a pleasure to shoot.

If you have any interest in cap and ball revolvers you owe it to yourself to get your hands on one of the Uberti Walkers.  Take her out and make big clouds of smoke with the almost original hand cannon.