What do you get when you partner the hottest new caliber of the year with one of the most respected AR-builders?  The drool-worthy Noveske Varmageddon 22 Nosler. The rifle is built from all premium parts, is made in the USA, and can’t be sold in seven states — so right there, it’s a must meet.

Though Nosler’s Varmageddon line of AR-platform rifles and ammunition has been putting prairie dogs, coyotes and other varmints on the lam for several years now, the new 22 Nosler version goes above and beyond in looks, potential performance, and features.  Built by Noveske Rifleworks in Grants Pass, Oregon, folks at both Noveske and Nosler believe this will be the ultimate varmint hunting platform on the market today.  The draw of the new round is a 300 fps increase in muzzle velocity over the .223/5.56 with greater capacity and energy. 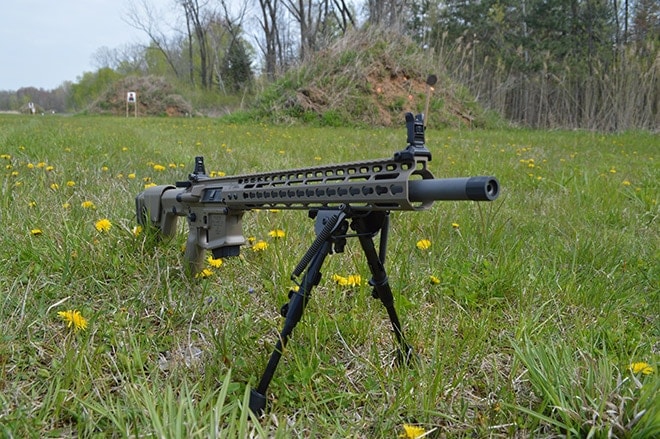 The Varmageddon may look sweet amongst the flowers, but it’s all badass business for hunters. (Photo: Kristin Alberts)

The new flat dark earth (FDE) rifle sports an 18-inch barrel, Super Badass charging handle, and STS ambidextrous safety.  A set of MBUS Pro sights come standard, just in case shooters would like a backup to their chosen optic.  Also included is a KeyMod quick release swivel mount and sling. Ours came with a 10-round ASC mag, though the company advertises a 25-round magazine made for the 6.8 Rem SPC caliber.  Everything comes packed in a black Noveske cardboard box along with a full complement of color-matched rail covers. 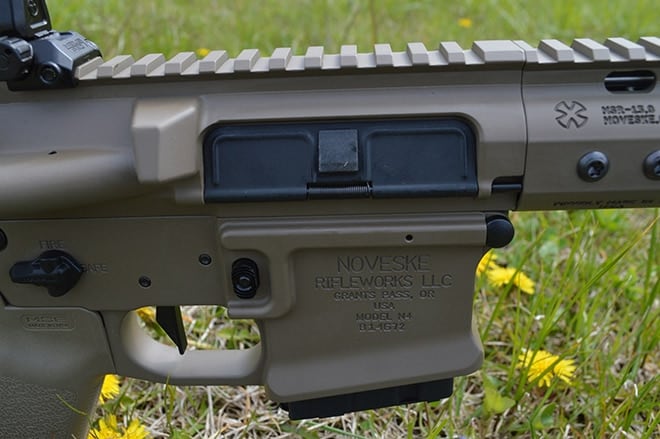 Detail of the made in USA Noveske Varmageddon, a nice partnership with Nosler for their new cartridge. (Photo: Kristin Alberts)

Magpul furniture lends the rifle its long-range competition looks and appeal. The PRS Gen 3 stock, which  provides adjustment for length of pull, cant, and comb-height, is the same one found on serious long-range competition guns.  It also includes picatinny mounting points at its base for use of a monopod. A Magpul MOE grip is intended to fill the hand and includes a bottom storage compartment. The Geissele SD-E Trigger provides a smooth two-stage pull.  The NSR Handguard is touted by the company as “the lightest weight free-floating handguard on the market,” and features a KeyMod system for rail accessory mounting.  The full-length Picatinny rail allows ample space for mounting optics and other toys. 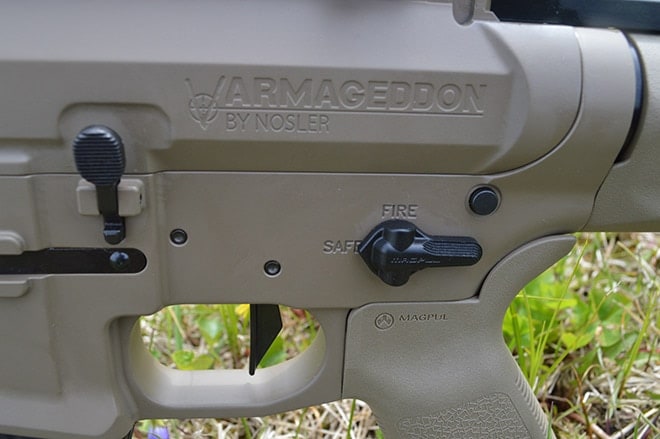 The muzzle wears industry-standard ½-28 threads and is protected with an included thread cap.  This is a slick gun, but sit down, because MSRP starts at $2869.95.  Kudos to Nosler for offering a military and first responder discount though, which adds up to $100 off in this case. If that’s just too much, but you still want a taste of the Noveske name coupled with the Nosler round, a complete upper with an 18-inch barrel is available for $1585.

The Super Badass charging handle is a nice touch, and its also practical and easy to operate. (Photo: Kristin Alberts)

The caveat?  Varmageddon rifles are not permitted to be sold in: California, Connecticut, Maryland, Massachusetts. Compliant, non-threaded barrel, 10-round magazine versions are available for Colorado, Illinois, and New Jersey.  You can’t help but like a gun that’s on a “banned-books” list of firearms. 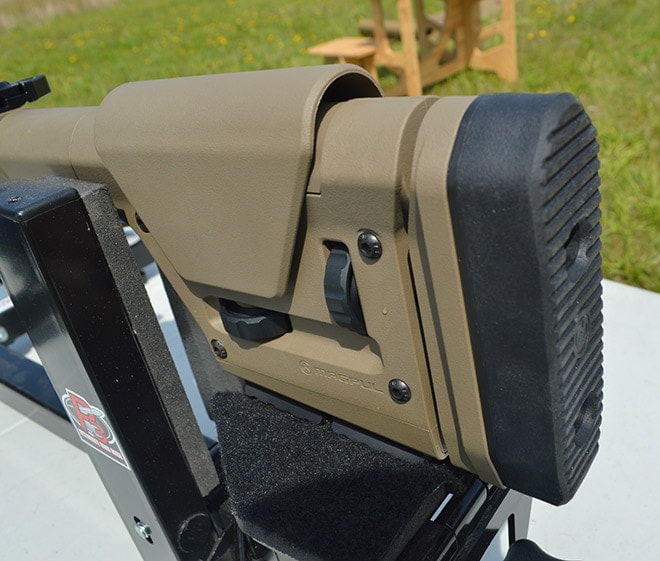 The fully adjustable buttstock is one of the stars of this rifle with both LOP and comb fitment options. (Photo: Kristin Alberts)

There are three flavors of medicine currently on the market from Nosler in this new caliber: Trophy Grade Varmint 55-grain ballistic tip, Match Grade 77-grain, and Varmageddon 62-grain.  Brass, dies and components are also slated for availability.  Reloaders will find full data from the company here. 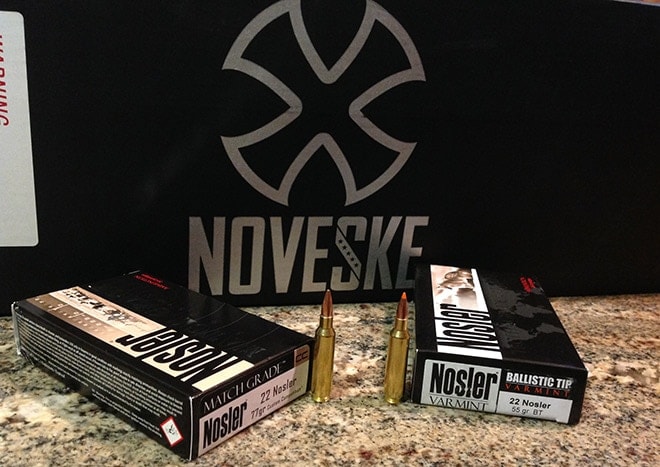 Both full rifles and uppers either are, or soon will be, available from these in addition to Noveske: Colt Custom, Stoner, Barrett, X-Caliber, Midway, Olympic Arms, War Sport, North Tec Defense, and Proof Research.  Others may come on board as buzz around the new round builds.

Threaded barrel and included thread cover, all branded with the Noveske logo. Pop up irons are included as well. (Photo: Kristin Alberts)

The game-changing aspect of the 22 Nosler round is that it yields almost 25 percent more capacity, delivers 30 percent energy, and is nearly 300 fps faster than the .223/5.56.  Velocities are surprisingly close to the zippy .22-250 cartridge, immediately putting the 22 Nosler into contention as a serious hunting round for varmints and small/medium game.

The .22-250 has long been a favorite of distance vermin hunters, author included, but we .22-250 shooters were limited to either single-shot or slower bolt action follow-up shots. When a coyote is trucking through your field of view or a pair of varmints appear together, sometimes it’s nice to be able to stay in the scope, stay on target and place that quick second shot. 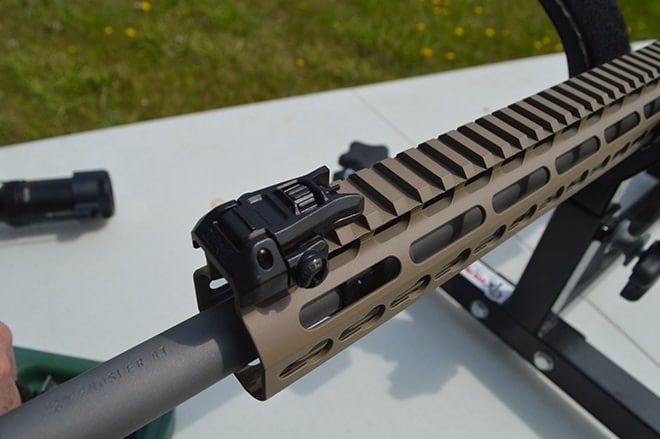 Not all shooters love semi-autos though, and Nosler recognizes that fact well.  Known for their range of accurate and high-end bolt guns, word has already leaked that the company plans to chamber their line of M48 bolt action rifles in 22 Nosler by late 2017.  Keep an eye on Guns.com as we continue to cover “10 Things You Need to Know about the 22 Nosler.” 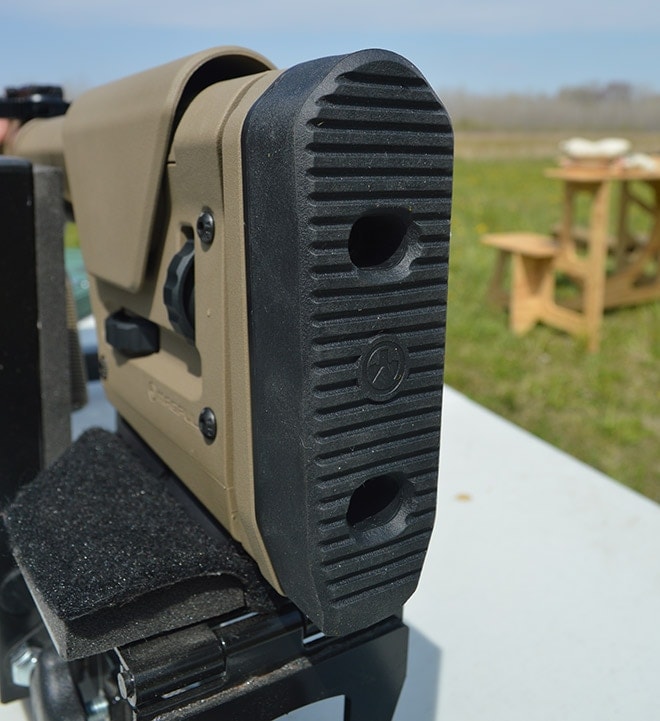 Rubberized buttpad is great, but not even needed for the light recoiling 22 Nosler. (Photo: Kristin Alberts)

Hunting potential and range enjoyment aside, the Noveske Nosler creation makes one fine target competition rifle as well.  We were able to get our hands on two of the initial three ammunition offerings, so we headed out to the range with both Match Grade 77-grain and Varmint 55-grain.  With the threaded muzzle adding a suppressor or other device is easy, though for the cost of the rifle, we’d really like to see at least a basic brake included along with the thread cover.

Varmaggedon works well on a tripod and is suited to either benchrest or prone shooting. (Photo: Kristin Alberts)

I can say I’ve shot hundreds of rifles with just as many triggers from horrendous to amazing, but this Geissele two stage may just have taken the top spot.  With a distinctive flat blade, its pull is true two stage, with easy first end takeup followed by an ultra crisp final break under 2 pounds on our Lyman digital pull gauge.

The fully adjustable buttstock is one of the stars of this rifle with both LOP and comb fitment options. (Photo: Kristin Alberts)

Without a doubt the caliber is the star and we already mentioned the trigger is top notch, but the Varmageddon’s furniture is icing on this tasty cake.  With a Magpul PRS buttstock, fully adjustable to fit pretty much any shooter, the rifle is at once capable, customizable, accurate, and just plain impressive. The only things that will ever hold this thing back are the cost of the gun and availability of the ammo.

Our first group at 100-yards, which measured well inside minute of angle as shown with a common house key in the photo, was eclipsed after some time on the range.  With a solid rest either on the bench or shooting prone, .75 inch groups were repeatable at 100-yard with light winds.  We sighted in roughly 3-inches high at 100 yards, which allowed us to make use of the BDC reticle on our Leupold optic. 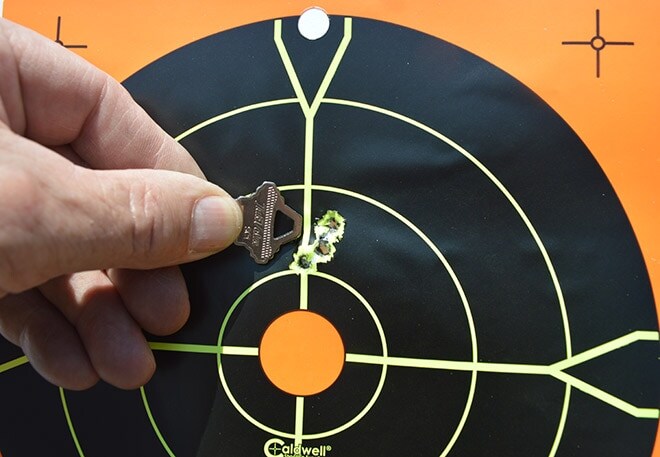 Though this rifle easily outworked our 3-9 powered scope with a thicker-than-ideal reticle, it performed nonetheless. Our best 300-yard group from the bench stayed well inside our 2-inch round target centers using Nosler’s Match 77-grain bullet, much better accuracy than we expected from an AR-platform rifle.  Not only will this performance translate to longer ranges, but also to excellent use on anything from prairie dogs to coyotes in the field. 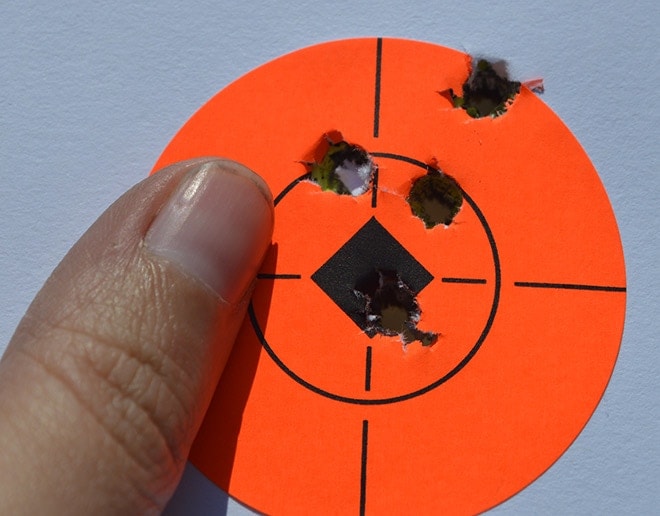 The only true limiting factor on the 22 Nosler at this time is the lack of factory ammunition offerings.  The only loaded rounds are coming from Nosler, though reloaders will rejoice at the availability not only of bullets and dies, but also new brass from the company.  As with most any specialty — and desirably new— chamberings, prices are steep and demand still outweighs availability. Though 22 Nosler is fired from the 6.8 SPC magazine, the casings share little in common other than general circumference, and the 22 Nosler brass cannot be created from 6.8 SPC. 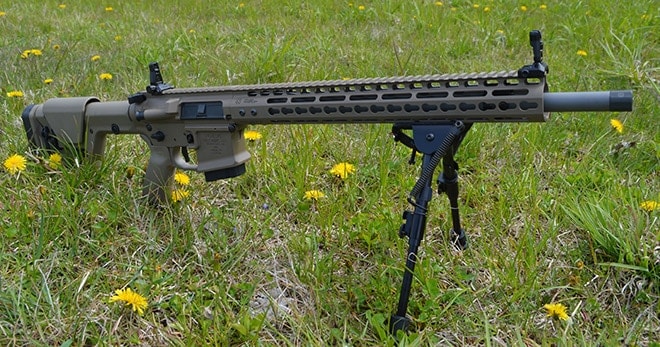 A formidable foe for all varmints. (Photo: Kristin Alberts)

The Varmageddon is a Nosler Signature AR by Noveske, two quality companies pairing on one mean gun with plenty of big-name, high-quality components. Even if this particular rifle is outside the range of your pocket book, the 22 Nosler chambering is a very interesting one that’s well worth exploring both on the reloading bench and even in a more simple, budget AR conversion.  But dang, when you’ve tasted filet mignon, chopped steak is just never the same.