Gun Review: If you’re a fan of the Walther G22 rifle, you don’t want to read this

The Walther G22 came out about eight years ago and is widely available in a number of different configurations. If you’re not familiar with it, the G22 is a semi-auto bullpup rifle chambered in .22 LR, meaning it has all the right qualities of a cool gun. And I really should like it. I have a penchant for Walther products and I think bullpup guns are a good design. Plus, I love .22s. So why did the Walther G22 leave me fairly unimpressed?

Well, a number of small and not so small reasons. But before I go through them, here’s a little about the gun.

The Walther G22 has a bullpup design, meaning the receiver and action are well back behind the trigger, near the butt of the stock, and it has a 20-inch barrel.

It features a polymer stock with a pistol-style grip and large thumb-hole, which comes with expansion plates to allow for some adjustment to the length of pull. There is an AR-style carrying handle with a slide-up rear notch sight and a front assembly with a post sight.

It’s also equipped with three Weaver rails on the gun to accommodate optics, lights, lasers, different grips and even a bipod, if you want. In addition to the feeding position for a magazine in the stock there is room for storing an additional 10-round magazines. 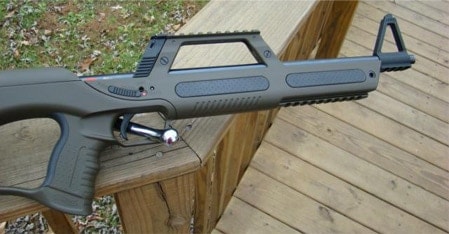 The G22 tested was used for the Ballistics By The Inch .22 tests and was fairly new and hadn’t been shot much. It was in very good condition with a topnotch fit and finish, as you would expect from Walther. And it only had the stock iron sights.

The ergonomics of the gun were pretty good for me. The one we were shooting had the additional stock spacers in place, and it felt quite comfortable.

The gun weighs 95 ounces, or just under six pounds, which isn’t too heavy to lug around while still being able to suck up recoil completely. Not even the most recoil-sensitive shooter should have a problem with it.

I do very much like the overall size of the gun, thanks to the bullpup design. It is less than 30 inches long, so would pack and store easily almost anywhere.

Accuracy was good with the iron sights. Shooting it freehand I was able to keep about a two-inch group at 25 yards. But with the right optics and shooting from a supported position, you should be able to do that well out to at least 100 yards.

Since the gun was new, I didn’t mind initially that we experienced a fair number of minor problems with it in terms of failures-to-fire and failures-to-eject because brand new semi-autos .22s are prone to this—until they get broken in—but the minor problems persisted during the testing.

But my biggest complaint was that I thought the trigger was mushy. Setting up a trigger on a bullpup-design gun is always a bit tricky because the trigger is so far away from the action. And I think the G22 is even worse because of the size of the thumb-hole in the stock. 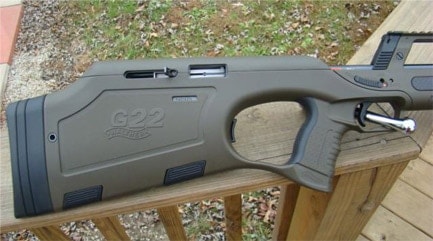 Without taking the gun apart to see what the internals look like, I can only hazard a guess that there are one or more linkages from the trigger to the action that have to work around this problem, and that those linkages allow for too much play before tripping the firing-pin. I’m sure you could get used to it, but I prefer my triggers to be smooth and break cleanly.

Another complaint I have is with the take-down of the gun. I didn’t actually attempt this, but I read through the owner’s manual and it seems needlessly complicated, with a fair chance of losing parts in the process.

Plenty of owners of these guns have complained about this as well, confirming my suspicions. Related to this is that from reports of owners, the G22 has additional problems feeding ammo unless it is kept relatively clean—meaning that you have to take the gun down often. Now, I like to keep even my .22s pretty clean, but I know a lot of folks who never, ever clean a .22. Anyone with that attitude should steer clear of the G22.

I also didn’t care for the sights. Well, I don’t usually like having iron sights so high up from the actual barrel, but that’s just a personal thing.