Gun Review: Walther PK380: Guns.com finds the Good, Bad and Ugly about it

The Walther PK380 reminds me of a movie. No, not a Bond flick – that’d be the PPK. Rather, of “The Good, the Bad, and the Ugly.” Not because it resembles it in any aesthetic sense, but that it’s obvious to me what’s “Good,” “Bad” and “Ugly” about it.

The PK380 is a recently introduced, medium-framed .380 ACP pistol intended for the concealed-carry market. As such, Walther wanted a design that would be relatively lightweight, easy to use, and about half the cost of their somewhat pricey PPK. I had a chance to shoot one fairly extensively during the second-round of testing of the .380 ACP cartridge by Ballistics By The Inch. Based on that experience, I can say that by and large Walther succeeded, though I have some very deep misgivings about some aspects of the gun.

Let’s start out with what I like about it. First, and perhaps most importantly, it is a locked-breech design. This is different than most .380 ACP pistols on the market, which use a direct-blowback system, and it makes one very big difference: it is easier to rack the slide on the PK380. For a healthy, middle-aged brute like me, this doesn’t mean much. But for anyone with arthritis or compromised muscle strength, racking the slide on many semi-autos can be almost impossible. With the PK380, it’s easy. And that alone makes it a very attractive firearm for some folks. 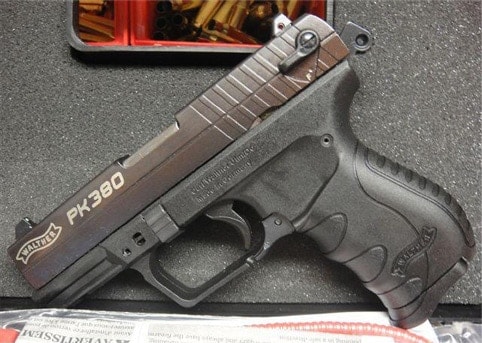 Related to this, the recoil on the PK380 is much milder than you would usually expect. The ‘micro .380s’ can be downright brutal in terms of recoil. The PK380 is mild. Partially this is due to the locked-breech design. The other part it is due to the greater weight of the gun, which is about 19 ounces, compared to just 8 ounces for the Kel Tec 3AT. And lastly it is due to the size and nice ergonomic design of the grip, which is large and comfortable enough to distribute the force of recoil over a greater area.

The 3-dot sights are substantial and easy to use. There is a model that comes with an attached laser, or you can mount your own laser or light to the Picatinny-style rail.

Not to mention that the trigger isn’t bad — not great, but better than a lot of moderately-priced guns. In double-action, which would be the first shot on it, the trigger is a long, solid pull of about 10 pounds. In subsequent single-action shots it is a crisper 4- to 5-pound pull.

The gun is truly ambidextrous, with the magazine centrally located under the trigger guard, and the safety on both sides of the slide. The gun holds 8+1, which is two more than most of the micros and one more than the PPK.

Overall, the ergonomics are quite good and the gun is comfortable to hold and shoot. It pointed very naturally for me and the accuracy is what you would expect from a medium-sized, decent-quality handgun.

There’s no slide release. You have to manually draw the slide back and then release it.

The fit and finish is OK, but not great. I’m not saying that the gun is shoddy in any way – just that it doesn’t have the same level of quality as what you would get from the PPK.

The PK380 has a proprietary tool that comes with the gun and it functions both to lock the gun as well as to take the gun down. This is annoying. You have to be sure that you keep track of where the tool is. But I have a similar system on my Steyr handguns, and I’ve gotten used to it (I keep one of the standard keys on my key-ring so I always have it with me). 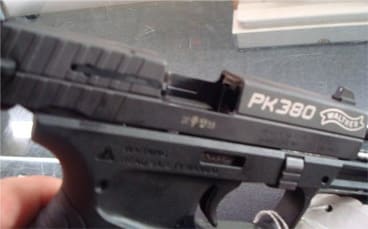 Surprisingly, even though the PK380 has a longer barrel than the PPK we used for the BBTI tests (3.66 inches versus 3.35), across the board it produced slower velocities with the seven different types of ammunition tested. Now, it wasn’t much – average of about 20 fps – but still, this isn’t what you would expect.

Lastly, I don’t care for the location of the safety on the rear of the slide, though this is common on a number of European-designed handguns.

Only one thing, but it’s a big thing, in my opinion. The gun doesn’t have a de-cocker. To de-cock the gun, you put the safety on and then pull the trigger to drop the hammer.

Which is a shame, because otherwise the PK380 is a decent gun for the money. Ah, well.