One of the new guns generating a bit of buzz at the SHOT Show this past January was this little fun gun from Walther.

It is dimensionally identical to the PPK.  Anyone familiar with the classic James Bond gun will understand the aesthetic. The PPK combines the classic lines of the iconic pistol with the practical accessibility and affordability of the .22LR to create a knock about gun that looks and functions great.

Because the gun is chambered for .22, there is a bit more steel inside.  It weighs in an ounce or two heavier than the popular .380 version.  It weighs in at a pound and a half, empty, and is just under an inch wide.

The steel sights are fixed and accurate enough for plinking and defensive shooting.  The 3.3″ barrel isn’t going to turn in super tight groups.  But it is fixed, which adds a little bit to the accuracy.  And it is threaded already.  Standard.  Nice touch, Walther. 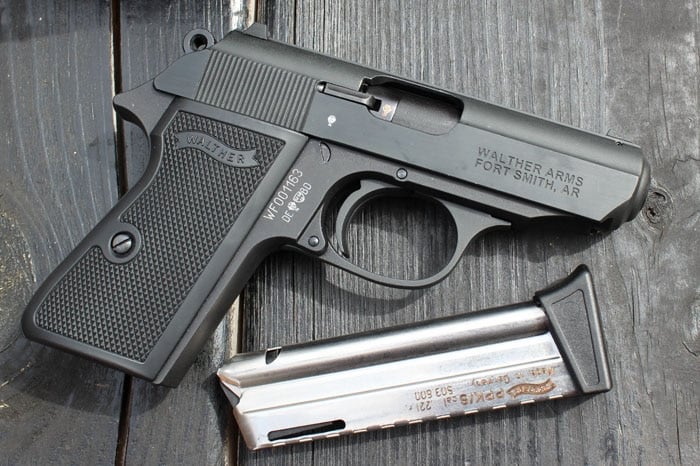 The grips are thin, which helps in concealing the PPK.  The magazine, a 10 shot, is stainless and exceptionally well built.  It loads easily and intuitively.  The feed is reliable.  And the magazine has a small lip on the bottom for placement of the pinky.

The magazine extension is nice enough, but not completely necessary.  The gun is small, but not tiny.  The whole package is a touch over six inches long, and right at five inches high.  It is concealable, but is easily recognizable as a gun when presented. 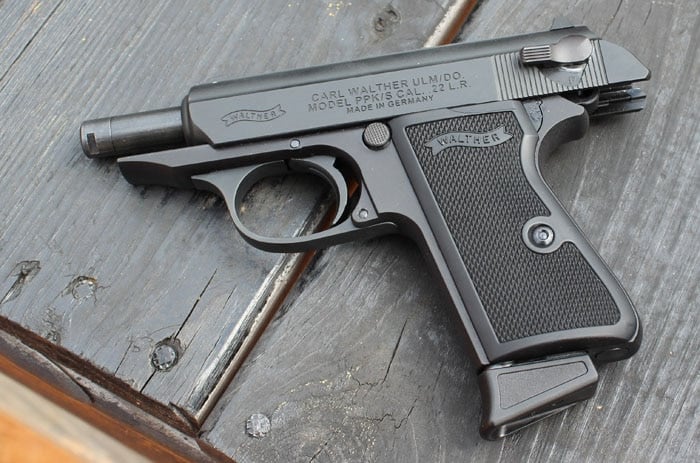 The PPK is the short version.  The PPK/S (the S is for Sport, not Short) adds an inch to the grip.

These new guns are being made in Germany and imported by the new Walther plant in Fort Smith, Arkansas.

A brief bit of PPK history

The Walther pistols trace their lineage to late nineteenth century Germany.  The original PP (which roughly translates as Police Pistol) was a popular sidearm.  The PPK knocks a bit off the barrel and the grip which makes it more concealable.  The PPK didn’t pass import rules established by the 1968 Gun Control Act, so Walther made a new gun by combining the frame from the larger PP with the slide of the shorter PPK.  The resulting PPK/S was heavier, larger, and passed the import restriction. 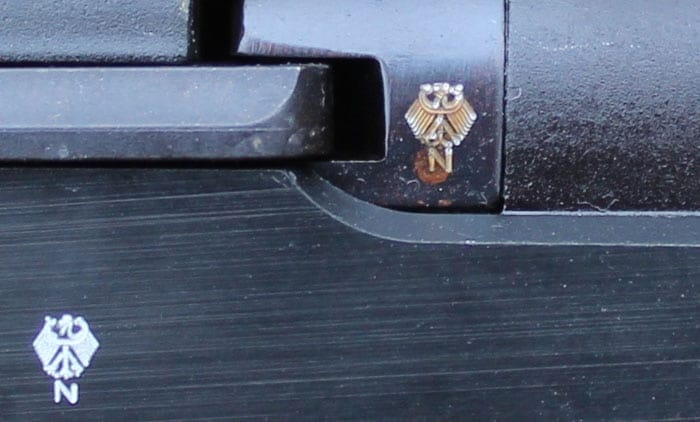 The German stamps are really quite lovely, and show the attention to detail Walther is famous for.

The .22LR version is not exactly new.  Walther’s made .22LR versions of the PPK before.  They remain immensely popular collectable guns and often sell for more than $1,000.

Double action mode is a completely different story.  The PPK’s double action trigger is beastly.  The pull is very heavy, and the travel isn’t smooth.  If you pull slowly, it wants to hang up on the way back.  And there were several instances when I had to release the pull and start again to get the hammer to drop. 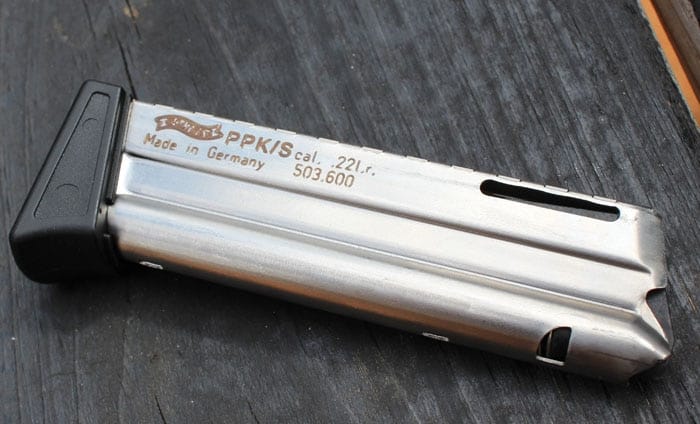 But let’s go back to what works right in this design.  The weight of the PPK holds down the felt recoil.  If you are limp-wristing the gun, it will buck a bit, but it won’t fail.  The blow-back design is very reliable.  With a solid hold on the gun, there is hardly any muzzle rise at all.  The PPK in .22LR is easy to operate, easy to shoot, and very graceful in its function.

We didn’t experience a single failure to feed or eject with the gun.  Other than the double action pull, there were no issues at all.

I’ve seen some video on-line talking about how this is an ideal self defense gun for a small framed shooter.  And while I was at the range shooting video, I heard a couple of people who I trust completely talking about how it would be a great carry gun.  The basis for their argument was simple enough.  The low recoil would allow for rapid shot placement.

I see the PPK in .22 as a great way to practice the skills needed to carry a .380 PPK.  Holster draws.  Live fire.  Dry fire.  Magazine changes.  Clearing jams.  All of these skills that might be needed for defensive deployment of a .380 PPK can be practiced with the .22LR version. 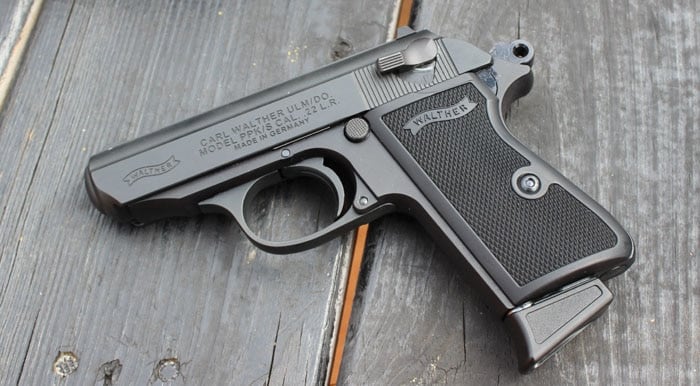 And if you are lucky enough to be able to find a brick or two of .22LR, this gun will be a lot of fun.  It is accurate enough to plink with.  And the threaded barrel will be attractive to those with suppressors.

The PPK in .22LR isn’t going to compete with the dominant American .22s.  The Ruger Mark III, or the Browning Buckmark.  But it isn’t meant to.  It sits in a different class of pistols.  It would have more in common, I think, with Ruger’s SR22.  But it has a lot more class.

The PPK in .22LR is going to sell well.  The MSRP on the black version is $399.  The “Stainless” version is a little more, at $429.  Sale prices should come in well below that once the newness wears off a bit.  If things ever return to normal, you should be able to pick up a gun and a brick of .22LR and be out the door for under $400.