I’m not nostalgic for the Walther PPK.  By the time I was born, the PPK had shed most of its Nazi associations and established itself as a reliable concealed carry pistol in an era dominated by the revolver.  I’ve never carried a PPK for any extended period of time.  I respect the gun for what it is.

It isn’t that I don’t appreciate the PPK.  Far from it.  I find the aesthetic to be almost perfect.  In fact, I’d go so far as to argue that the PPK is the best looking pistol that wasn’t designed by John Moses Browning.  And I appreciate the deep and convoluted history of the Walther PPK and the way the Walther brand has been able to reinvent itself in America.  I recently reviewed a PPK .22 that I think is one of the most enjoyable fun guns I’ve shot in years. 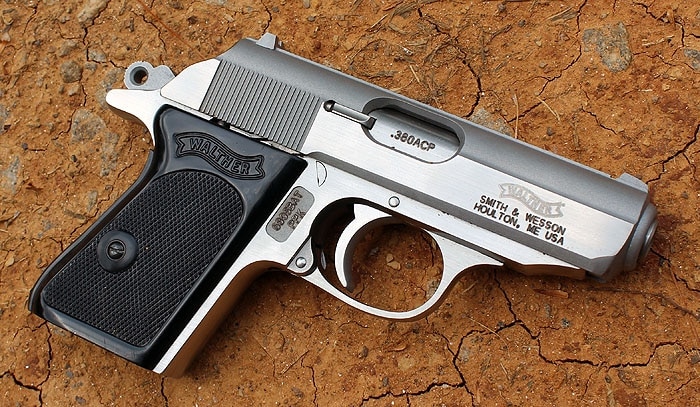 Yet we are nearing the end of 2013.  If we were to limit the Walther’s competition to guns chambered in .380 ACP, the Walther PPK is drowning in a sea of smaller, lighter and cheaper competition.  But it isn’t that easy.  As a heavy, medium sized, low capacity pistol, the PPK is struggling to compete with guns chambered for much more powerful rounds. 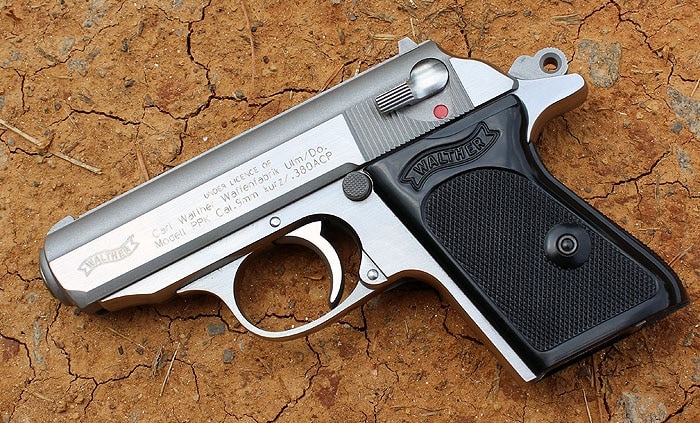 But this is a brand-spanking-new Walther PPK and I’m coming at this review from as neutral as possible.

Let’s talk a bit about size.  The PPK is 6.1 inches long.  That length allows for a fixed barrel that’s 3.3 inches long.  The sight radius is a generous  4.2 inches.  The PPK (as opposed to the slightly taller PPK/S) is 3.8 inches tall.  It comes in right at an inch wide, and weighs 1 1/2 pounds with a loaded magazine. 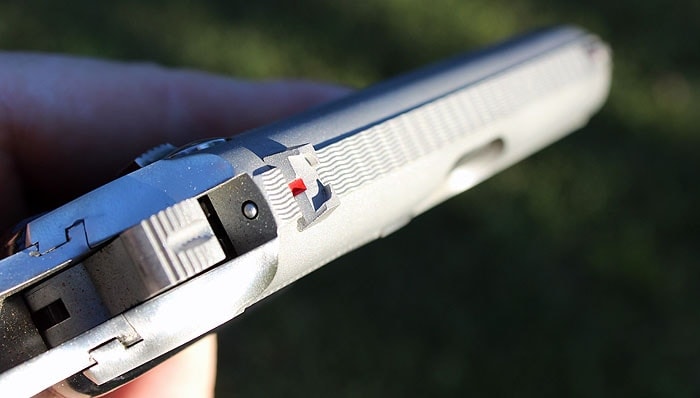 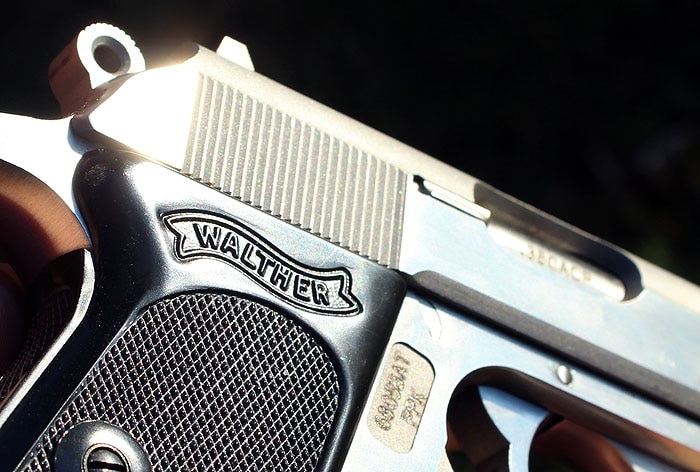 The finish on the stainless version is bright, but the top of the slide is blasted to reduce this glare, and the strip between the sights is grooved in a delicate wave that cuts the light even more.  MSRP on the PPK is $629.  It comes in closer to $550, usually, retail.  That’s a lot of steel for the price.

This gun can flat out shoot.  While most of the .380s on the market today will fire when you pull the trigger, they are hardly fun to shoot.  And practice is punishing.  By trimming their physical dimensions to the minimal requirements needed to hold together under the pressure of the .380, they cut out weight and size.  And they are punishing.

The PPK is smooth.  It shoots very well.  Because it has a fixed barrel and longer sight radius, the PPK’s accuracy is very consistent.  Because it has a healthy bit of mass, it doesn’t bang into your hand, or jump.  Repeat shots are made much more quickly with the PPK than with a polymer .380. 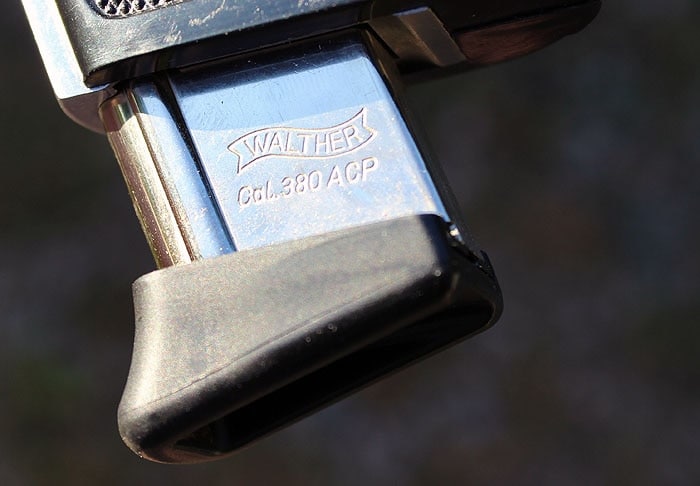 I’d attempt shots with the PPK, and confidently, that I wouldn’t make with any other .380 I’ve shot.  Maybe the Colt Mustang.  But the PPK’s sights are better than the Mustang’s, and the extra girth in the grip and make it easier to hold and keep steady.  If there is one thing that makes the PPK stand out from all of its competition, it is the ability to hit accurately at longer ranges.

I punched some paper with the PPK when I was testing it, and the results were better than I’d expected.  From 7 yards, I could group shots between 2 and 3 inches.  After I’d gotten used to the recoil and the controls, I shot some steel plates.  Moving from plate to plate was easy.  Dumping the magazine on one was almost too easy.  This gun was built for more than defensive situations, though it certainly excels at fast point shooting scenarios. 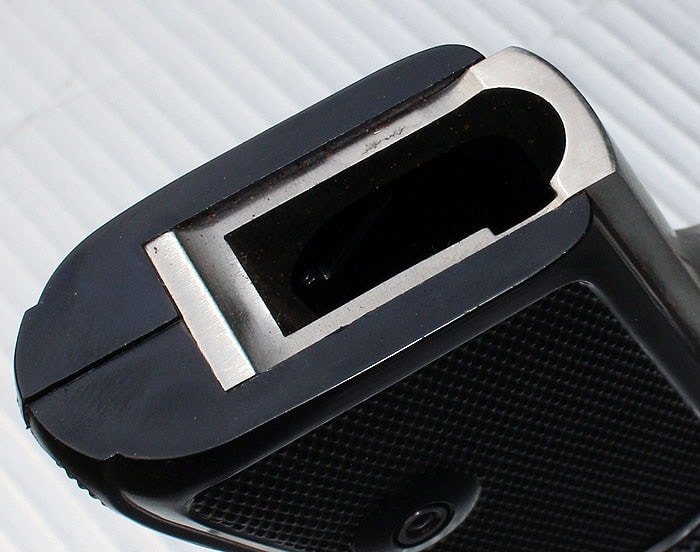 Magazine changes don’t happen as quickly as they do on most double-stack pistols these days.  The opening is narrow and the corners are sharp.  If you’re off, even a bit, you’ll miss.  The gun comes with one flush magazine and one with a finger rest.  But with only six in the magazine, you will want to practice reloads regularly.  Diligently.

The gun hides easily enough.  Most .380s on the market can ride in a front pocket without drawing too much attention.  Not the PPK.  It needs an IWB holster, or a shoulder rig.  It is easy enough to conceal, but it isn’t concealed casually.

But there’s something else to consider.  If you are carrying this for defensive purposes, be aware of the safety.  I don’t want external safeties on my concealed carry guns.  But that’s me.  Opinions differ.  And you don’t have to engage the safety. 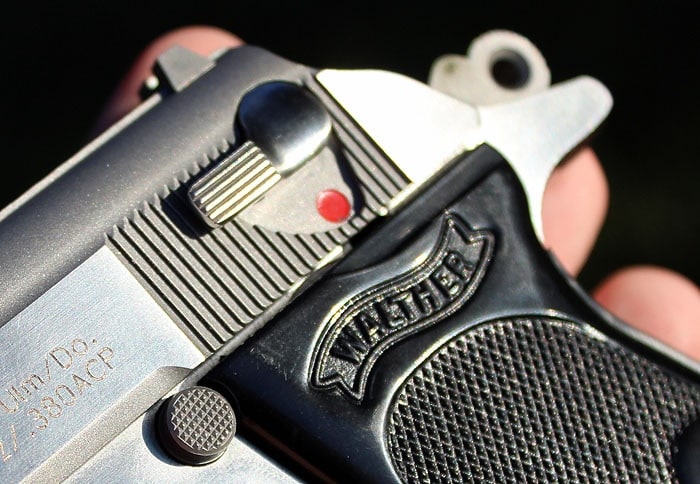 Yet there’s more to concealed carry.  We often overlook situations in which a gun deters violence without being fired.  The PPK looks like a gun.  Too many of the mouse guns on the market disapear in a pocket and in your hand.  The PPK will draw attention to itself when you draw.  Sometimes that’s enough.  And the external hammer and long sight radius mean you can stage a very precise shot.  That kind of confidence is empowering in and of itself.

So is it obsolete?

I began with an abstract question about obsolescence.  The answer is complicated.  Yes, I think the PPK is obsolete.  There are so many high quality, very reliable, much more compact, less expensive .380s on the market.  Even the Colt Mustang is smaller.  But that misses the point a bit.  The Walther PPK may be the most effective .380 on the market, but it makes distinct sacrifices to maintain its efficacy.

Rather than looking at all of the .380s that are smaller, I’d suggest Walther look at the larger caliber pistols that are the same size.  The Springfield Armory XDS isn’t much bigger than a PPK.  We can argue about the relative merits of the .380 vs. the 9mm, but there’s no contest between the .380 and the .45.  Why can Springfield Armory make a compact .45 and Walther can’t size up the PPK to at least 9mm? 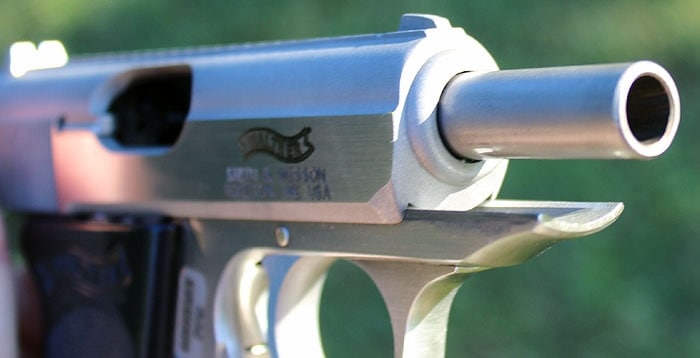 I’m not making fair comparisons.  Apples and oranges, I guess.  Colt used to make a .380 that could be compared quite closely to the PPK, but they stopped making the 1908 long ago.  The optimist in me wants to point out that the PPK stands alone.  I can’t think of another common production gun that matches the PPK’s abilities and reputation for dependability.  It is a traditional double action pistol with an external safety.  It is a fixed barrel pistol capable of surprising accuracy.  It is sturdy enough to be carried everyday of your life, and then some.  It is the PPK.

The PPK is a curiosity.  I think it is going to remain so until Walther invests in the engineering and tooling to make a 9mm PPK.  And when they do, this whole conversation is going to be much more relevant.