A New Beginning for Walther: The Walther PPQ M2 is a rock star (VIDEO)

I know my way around the PPK.  I love the look and function of the iconic German service pistol (and their latest .22 LR version, too).  But I’ve never taken an interest in their polymer framed pistols.  It isn’t that they’re not nice, or functional.

They simply didn’t stand out in the vast array of other polymer framed pistols.

But that was then.  Walther sent us this PPQ M2 to review and it is a rock-star. 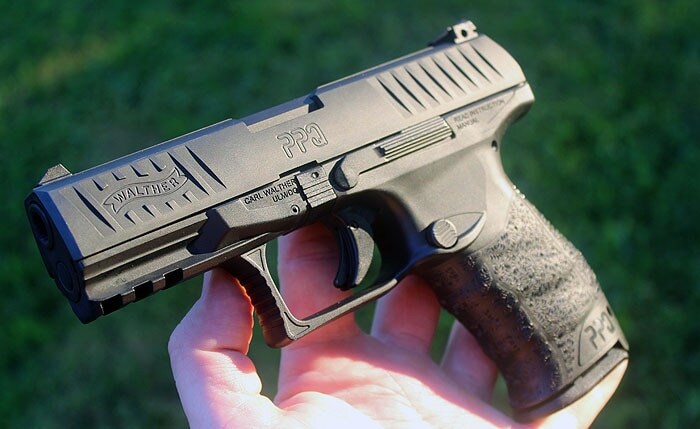 The gun is single action only.  It is striker fired.  The trigger pull comes in at 5 1/2 pounds.  The entire gun is only 7-inches long.  At just over 5-inches high and under an 1 1/2 inches wide, the PPQ is easily concealed.

And with a double stack magazine that holds 15 rounds of 9mm, the PPQ M2 becomes an ideal mid-sized compact for self defense.  It is big enough to deliver a sizable round count, but small enough to tuck inside a waistband.   And it shoots exceptionally well. 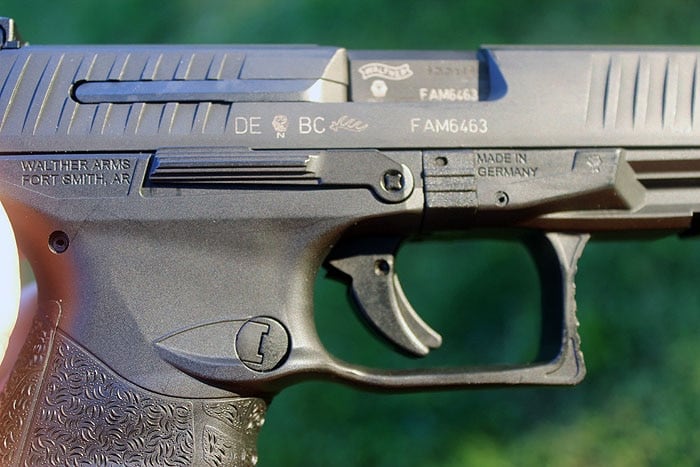 The controls on the PPQ M2 are truly ambidextrous.  The slide stop is already double sided, and the magazine drop button can be reversed.  As there are no traditional manual safeties, that is not a concern.  There are three safeties built into the gun: two drop safeties and a firing pin block for safe carry.  But if it is cocked, the PPQ will fire when the trigger is pulled.

Walther call this their Quick Defense Trigger.  And I’ve preached the idea for a long time.  I understand why some people want safeties.  But in a world where split second readiness is an asset, the quick defense trigger might be an asset.

The trigger has a clean break, and a short travel (less than half an inch).  The reset is super short (Walther says 0.1 inch).  The short trigger reset allows for fast double-taps. 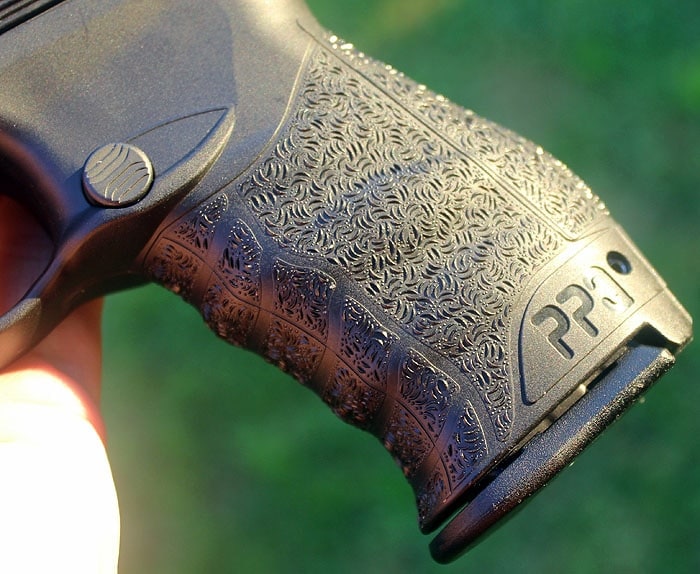 The polymer frame is very well stippled.  The grip, with its varied back-straps, can be sized to fit a wide variety of shooters.  Walther’s grip has a pronounced hump that fits exceptionally well in the hand.  And the trigger guard is squared off, and even a bit con cave, for shooters who like to hold onto the guard while they shoot.

As this is a concealed carry gun, the Walther has low profile three-dot polymer combat sights.  They’re really simple, and highly functional.  My only concern about the polymer sights is how they will age.  But out of the box, they work exceptionally well. 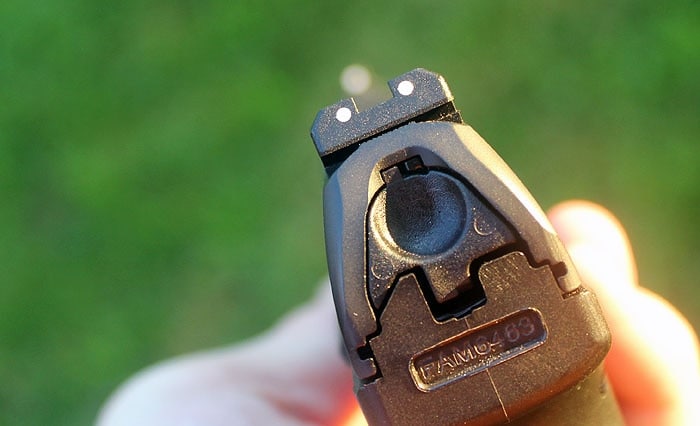 The rear sight is adjustable for windage. For those who share my concern about polymer, Walther makes optional metal self-illumination and metal Tritium night sights.

The PPQ M2 slide is finished in Tenifer, a ferritic nitrocarburizing process.  It provides a matte finish that offers more corrosion resistance than stainless.  I like the finish, and the way Walther has beveled the slide.  The angular top, with the flat strip, doesn’t catch the sun. 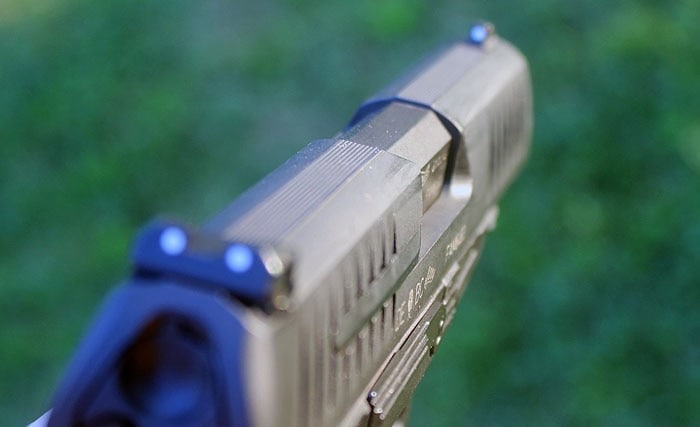 And that same angular aesthetic, which is admittedly very functional, continues all over the slide.  The deep slide serrations on the front and rear of the slide mean there’s very little real estate on the slide that can’t be gripped.  Beneath the slide, there’s a small section of rail for the attachment of a laser or light.

Walther calls this look “distinctive Walther styling.”  And it is distinctive.  The heavy texture of the slide meets the ergonomic curves of the frame to create a mixed bag that is incredibly functional, even if the old fashioned Walther fans won’t ever consider it attractive. 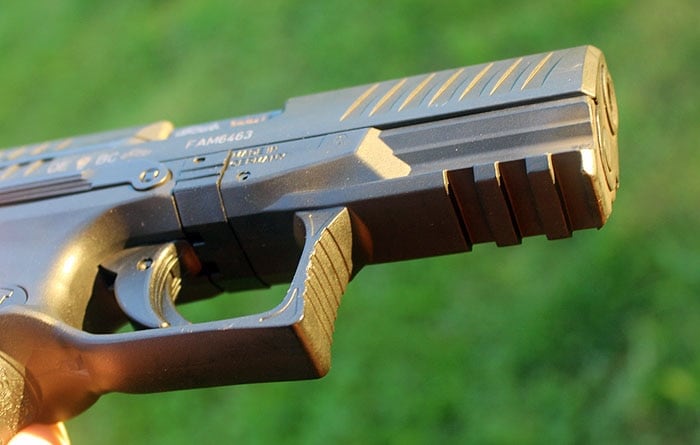 I shoot surprisingly well with the PPQ.  It points well.  The trigger pull is really consistent.  The trigger safety helps in finding good placement for my finger, which makes a tremendous difference for accuracy.

Recoil is sharp on the small gun.  It doesn’t weigh enough to counteract the punch of the 9mm.  But the aggressive texture of the frame and slide offer a really solid grip for both hands, and it isn’t much of a challenge to hold the gun down.

I shot several different scenarios with the PPQ.  I worked on Target is Moving’s swinging target.  I ran the PPQ in a steel challenge course, and I practiced basic accuracy skills.  The PPQ did great in each scenario.  With no practice, I was able to clear stages of the steel challenge course in just over six seconds.  That’s not bad for me.  I shot cold, on a course I hadn’t shot before.  Five targets of varying sizes, at unknown distances, with a gun I was just learning.  From the holster.

The target below is from the Target is Moving.  46 rounds, from 25 yards, with the target on a fast erratic pattern.  I hit with almost half. 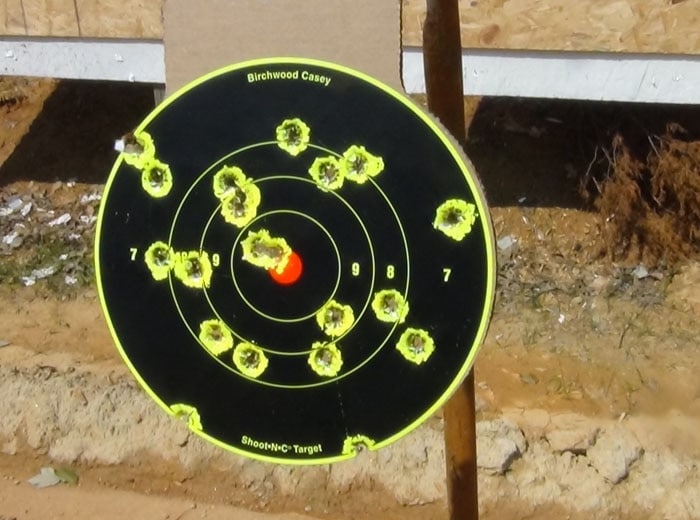 A new beginning for Walther

When the PPQ came in for review, I was pleasantly surprised.  I was prepared to be ambivalent.  And then I shot it.  After I saw what I could do with it, I gave it a fair chance.  After, I’m not only impressed with the gun, but feeling a bit of genuine respect for a gun I hadn’t expected to like. 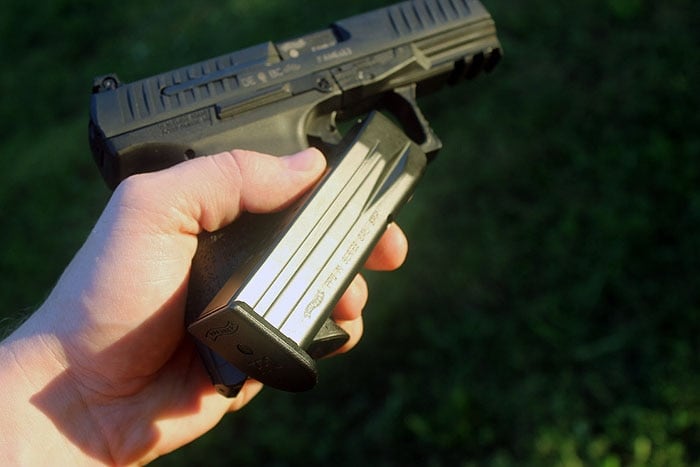 Walther has nailed it with this one.  It is a great carry pistol.  I think it will compete well with Glock, Springfield and Smith & Wesson.  And with an MSRP of $599, they will appeal to a lot of folks who may never have consider Walther an option for everyday carry.