The original Sterling SMG was a late-WWII designed gun that saw a lot of use around the world until late in the 20th century.

Basically an improved STEN, the Sterling was a typical open-bolt design gun that fired the 9mm cartridge effectively, accurately and quietly (in the suppressed version) out to 100 yards. It is a fairly simple and robust design, with a 34-round side-feeding magazine, a frame stock, which folds under the gun, and a 7.7-inch barrel.

Enough of the guns were made around the world that there’s still a fair surplus of them (and parts) to be found. A few years back Wise Lite Arms decided to use a bunch of these parts to manufacture a civilian-legal semi-auto version that was called variously the “MK IV” or the “Sporter Carbine”, and sell them through Century Arms International.

To be in compliance with the Bureau of Alcohol, Tobacco, Firearms and Explosives regulations, the design was tweaked a bit to change over to a 16-inch barrel. In addition, the operating mechanism was changed from an open-bolt design (where the bolt strips off a round from the magazine, chambers it and fires it, then blows back to the starting position as a function of recoil) to a closed-bolt design, which is found on most modern semi-auto firearms. But other than that, the gun is largely the same as the original Sterling. 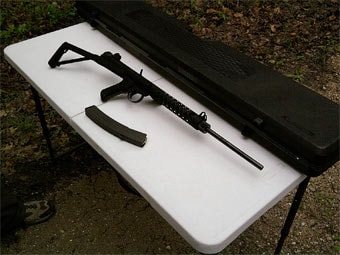 The one I tested was fairly new and hadn’t been shot much, but it was so much fun shooting it that I suspect it will now get a lot more service. Yeah, the Sterling Sporter was a fun little gun and struck me very much like shooting my little Kel Tec Sub 2000 carbine in 9mm.

Loading the magazine was easy and fast, thanks to the roller-design of the internal mechanism. The magazines were original and this may have been part of the reason why Wise Lite Arms revived the gun design—to comply with the Assault Weapon Ban allowed for grandfathered magazines to be used. This gun was made after the AWB expired, though, so it had a functional folding stock.

One thing to note about the design change from an open-bolt to a closed-bolt: if you fill the magazine completely, it is difficult to chamber the first round. However, if you leave out a couple of cartridges, the whole process tends to work better.

To operate the gun, you have to put the safety lever (located on the left, above the pistol grip) into the “safe” position, insert the magazine, then draw back the bolt handle (on the right). Simple enough.

The initial temptation is to grasp the magazine, since it sticks out to the left, with your left hand, but this, you may have assumed, can lead to feeding problems. There are a couple of partial cups on the barrel shroud, which can serve as a rest/stop for your left hand, and keep it from getting in the way. Once you realize that the barrel shroud will stay cool, this is a very natural way to hold the gun.

Considering that many of the parts were decades old, the whole thing had a surprisingly good fit and finish. Everything except the magazine and trigger had the black crinkle-coat paint, which seemed to be good quality. While some changes had to be made to mount the longer barrel, nothing seemed jerry-rigged or shoddy.

he trigger was better than I expected. Not great, but not rough and not heavy, as might normally be the case with a military-style gun. The front sight is adjustable with tools and the rear sight had the standard Sterling flip-up for 100- and 200-yard ranges.

I only tried the gun out to 25 yards, but it was surprisingly accurate at that distance and popping six-inch steel spinners wasn’t a challenge at all.

Recoil was almost non-existent, as is usually the case when shooting a common pistol caliber out of a carbine. The Sporter weighs about seven pounds, so that is plenty to soak up recoil.

Function was fine. I didn’t have any problems with either ball ammo or JHPs. This makes sense, since the whole system was robust enough and with enough tolerance that I expected it to shoot just about everything without a hiccup.

Unfortunately, Wise Lite Arms is no longer making the Sporter Carbine, though they do have a Sterling model with a vertical magazine still listed on their site. But these guns can be found online, sometimes at a fairly modest price (under $500). I’ve seen reports that some early versions had problems breaking the firing pin, but otherwise they seem to hold up well. You could certainly do worse for that kind of money.