With the women’s market booming and hunter education classes hosting increasing numbers of girls and women, so rises the need for guns that fit.  With their Women of Weatherby program, the company has been committed to welcoming the finer sex into the hunting, and now is just releasing its first rifle built for, and designed by, a team of hardcore female hunters and shooters, the Camilla.

What is the Camilla rifle? 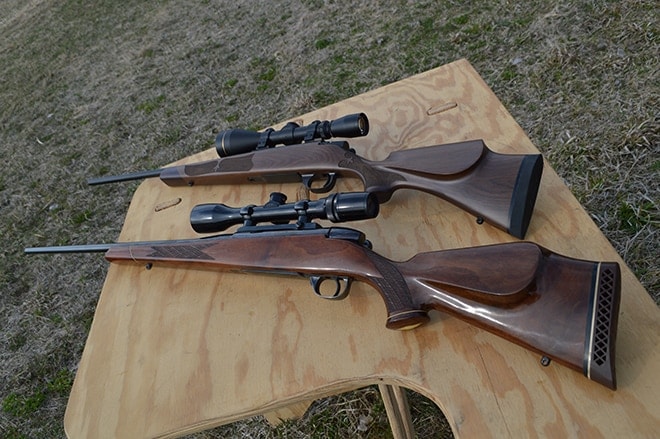 The Camilla bolt-action rifle is built on the longstanding Vanguard action, but has been customized with external fit dimensions tailored to a woman’s body.  The stock shape, grip size, length of pull, and drop at both the comb and heel have all been designed with women’s proportions in mind. The Camilla has been slated for a Spring 2016 release, though only three of the calibers—.223, .243, and .308—will be hitting stores in April-May 2016.  The sweet 7mm-08 chambering will not be shipping until at least August of this year.  MSRP is $849. 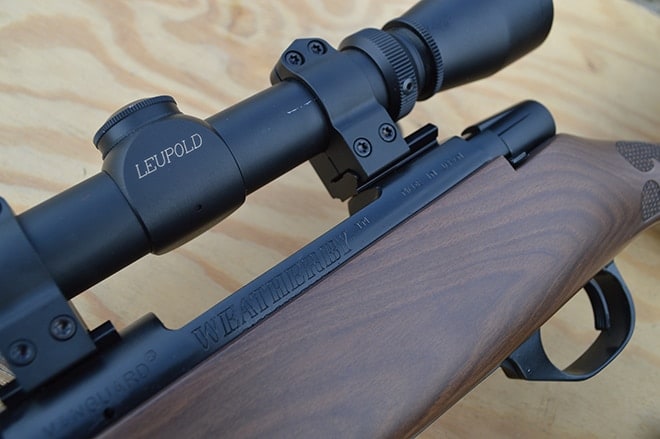 To further sweeten the deal, Weatherby paired with Leupold to offer the first hundred buyers a free Leupold VX-2 3-9×40 optic.   In a heartwarming move, the Camilla is named after late founder Roy Weatherby’s wife.  We were first introduced to the rifle at SHOT Show 2016 by Brenda Weatherby, and she has been the gun’s biggest public proponent, so this really is a family affair. 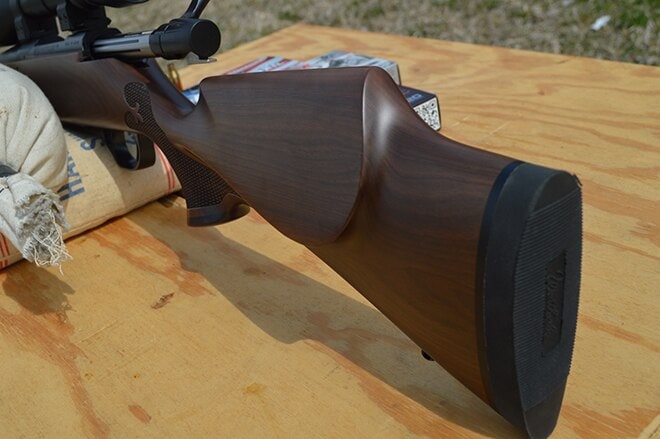 Built on Weatherby’s bestselling Vanguard platform, the Camilla carries many of the features associated with those guns, and even improves upon them.  The Camilla guarantees Sub-MOA accuracy out of the box.  According to the factory, that’s .99” or less three-shot groups at 100 yards when used with  either Weatherby factory or other premium ammunition.  The rifle comes standard with a match quality, two-stage trigger adjustable down to 2.5 pounds.  Our gun came pre-set at 3 pounds 6oz, quite nice for an out-of-the-box hunting rifle. 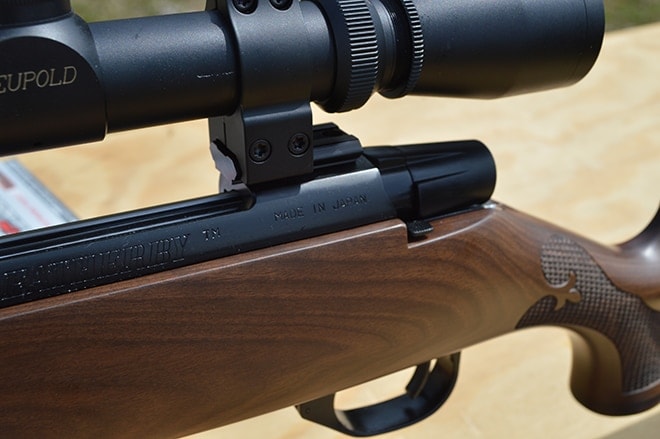 The Camilla is stamped Made in Japan. (Photo: Kristin Alberts)

There’s a three position safety and bead-blasted matte-blue finish on the metalworks.  Barrels on all the Camilla’s are a wieldy 20” length and are cold hammer forged #1 contour.  There’s the typical one-piece machined bolt body that is fluted and in a fully enclosed bolt sleeve, both reducing weight and protecting against an accidental case rupture. The one-piece machined receiver features an integral recoil lug for additional structural strength while a hinged floorplate makes unloading unfired cartridges quick and easy.  Weatherby’s massive M-16-style extractor is one of the best in the industry for reliable extraction. 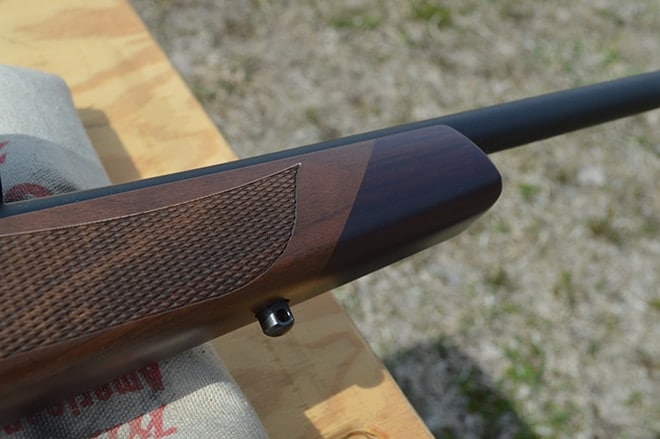 All that aside, the stock is really what defines the women’s rifle.  Most noticeable is the length of pull having been shortened to 13 inches. A shorter, thinner forearm makes the gun lighter and easier to grasp for smaller hands.  The grip is much slimmer and the angle of the grip has been changed slightly as well to shorten grip-to-trigger reach for more positive trigger contact and control. 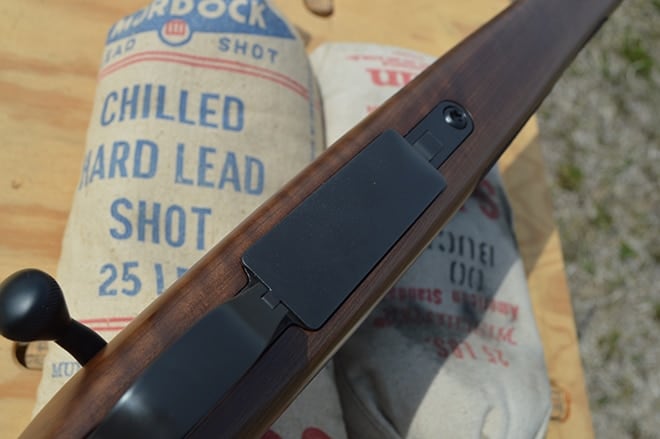 In addition, a barely noticeable trigger finger groove has been added for improved ergonomics, along with a right palm swell.  The higher comb is intended to properly align the shooter’s eye with the scope for faster target acquisition and provide superior cheek weld.  The toe of the stock is very noticeably canted away from the body in an effort to better fit a woman’s shoulder, and the recoil pad has been reduced in size and also given a negative angle.   All of that is built into a satin finish, A-grade Turkish walnut blank with rosewood forend and grip caps. 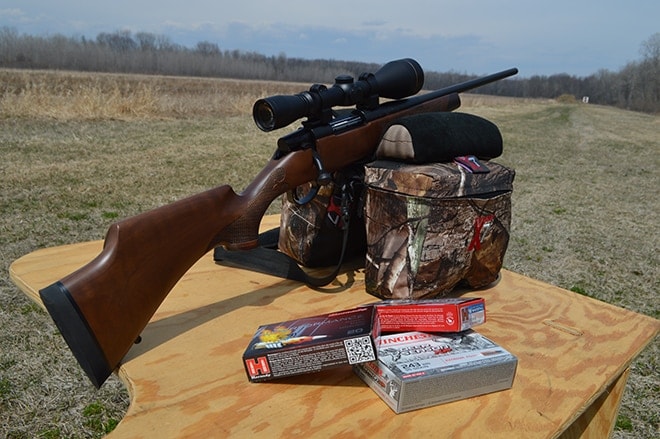 For our accuracy testing, we mounted a Leupold VX-II 3-9×50.  Our ammo arsenal included Hornady American Whitetail 100 gr InterLock, Hornady Superformance 95 gr SST, and Winchester 95 gr Deer Season XP.  We even shot reloads with premium Nosler bullets.  Three-shot groups at 100 yards with all four ammo options easily fell inside the M.O.A. guarantee of .99”, with the best three shot group 0.79.”   Even repeated five-shot groups hung within the 1”-1.25” mark, all shooting from the BullsBag rest. 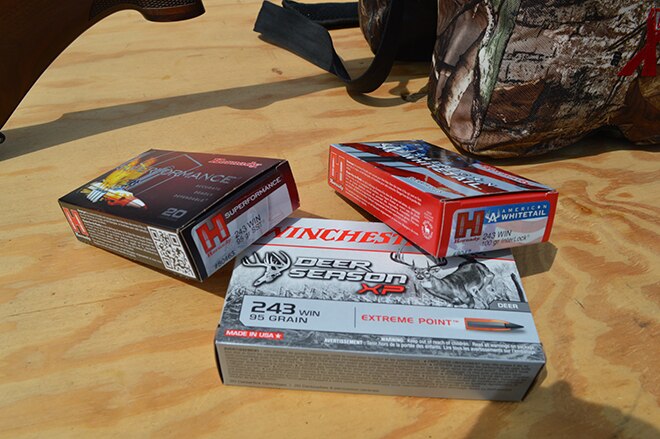 Per Weatherby’s Vanguard build, each trigger is hand-honed, factory-tuned and inspected for a clean, crisp break, improving shooter accuracy. The trigger is indeed as smooth and crisp as they advertise, with no creep whatsoever.  The two-stage trigger has always been a favorite of mine.  The initial takeup is easy, and the final break clean as can be.  Our Camilla in .243 was a pleasure to shoot on the range, and would no doubt make an able hunting companion, easy to carry at 6.25 pounds sans optic, and with very minimal recoil. 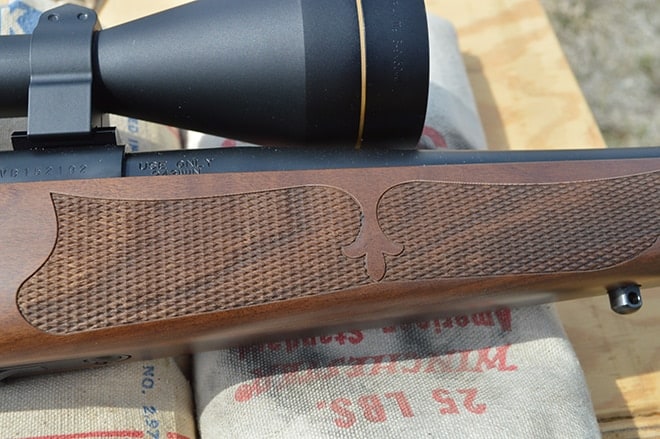 As expected, reliability with all the ammo was 100% feed, fire, and ejection.  Our qualms with the Camilla are few and minor.

Coming from a woman accustomed to shooting standard “male” rifles, the smaller grip size and length of pull took some getting-used-to, but the quality trigger and capable build made it easy to shoot.  The right palm swell feels natural in the hand, but also serves as a reminder that lefties are left out on this one. 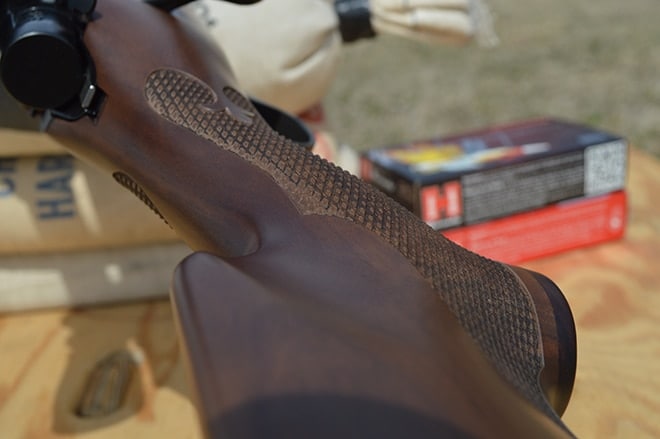 The only physical flaw on our gun was a small area of flawed checking near the top of the right swell, which we have no doubt Weatherby would rectify if needed.  The Camilla’s fleur de lis pattern and rosewood forend and grip caps, however, are both very classy and well done.  In fact, the fit and finish of the entire gun is of the highest standard, as I’ve come to expect from the better Weatherbys. 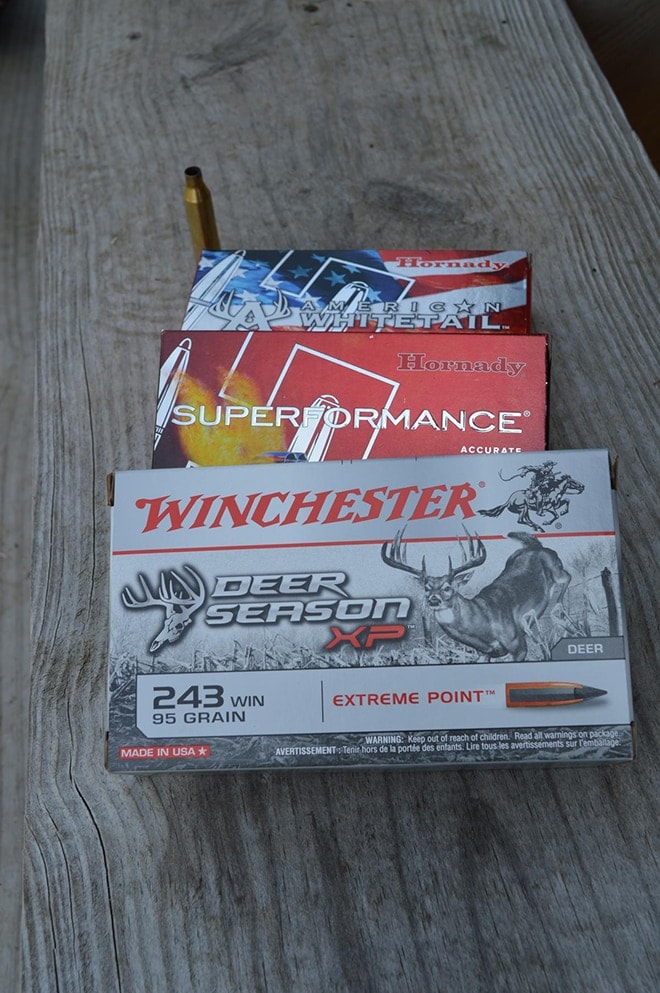 Though I am a fan of .243 Win, I would like to see the Camilla in some larger calibers.. (Photo: Kristin Alberts)

The caliber offerings of the first-run Camillas are more than adequate to introduce shooters to both varminting, smaller game like antelope, and bigger game like whitetail and muleys, all while managing recoil.  While the slim grip and narrow roll-top comb handle the minimal recoil of our test .243 with ease and comfort, I’m not sure I’d care for those specific dimensions in harder hitting magnums like the .300 Weatherby.  It would, however, be sweet to see the addition of more serious calibers like the .257 Weatherby Magnum and a few 30-calibers, even if that means alterations to the stock.  In the future it would even be nice to see additional barrel lengths to wring greater velocities from the rounds.

The Camilla rifle really excels for smaller frame shooters, namely women of small stature, but also youth of either gender.  We actually had several men on the range comment on the good looks and quality of the Camilla, never even knowing it was a “women’s rifle.” 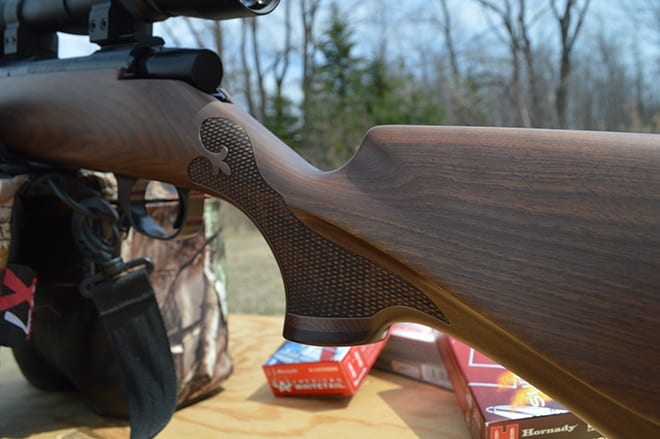 Being taller and of bigger build than many female counterparts, I have no problem shooting most of the rifles on the market.  However, I am a full supporter of a design like the Camilla that really makes both new shooters and women shooters feel comfortable with their rifle and gets them into the field to join the “sisterhood” of Women of Weatherby.  In fact, I’d love to see more additions to the women’s line of Weatherbys, and not necessarily complete guns, but even just replacement stock options for the Mark V line in deluxe wood or synthetic as well.

All in all, the Camilla is a very compact, fast-handling, accurate, well-built rifle geared toward female shooters.  Do women need a specific rifle to be successful?  Absolutely not.  But with the Women of Weatherby, it’s all about empowering female shooters, and the Camilla rifle is one giant step towards making women hunters more successful and confident in the field.  The Camilla is proof that a woman’s rifle is not subpar in any way like too many other youth/womens marketed guns built with cheaper, pink, lighter, and with lower quality components.  I know I’ll be keeping my eye on Weatherby to see how they expand the women’s lines in the future.  Well done, Weatherby.