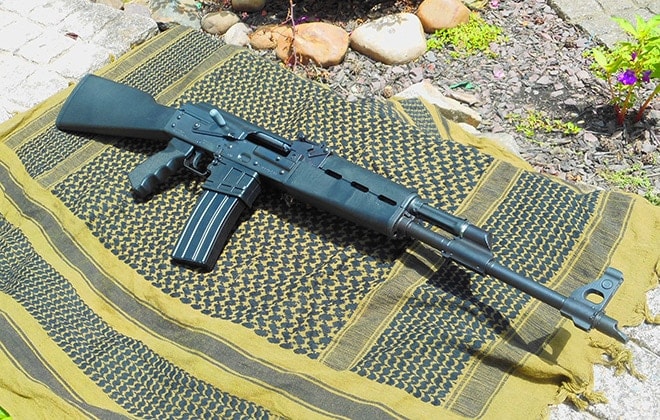 Zastava’s latest offering, the M90NP, is an odd duck amongst production AK rifles and it certainly stands out amongst the crowd. Much like how communist Yugoslavia used both Western and Soviet equipment, the M90NP combines a Soviet AK-pattern rifle with American magazines and ammunition.

Built for the US market, the Zastava M90NP seems to be a throwback of sorts. The heavier barrel and RPK-style trunnion and thicker receiver are present, features that have been dispensed with on current production NPAP rifles. This should please fans of the older OPAP series of rifles which featured these and adds to the rifle’s durability. The heavy barrel is not chrome-lined. This might annoy those who demand it on every rifle they touch, but I’ve never seen corrosive 5.56mm ammunition and non-chrome lined barrels are a bit more accurate. 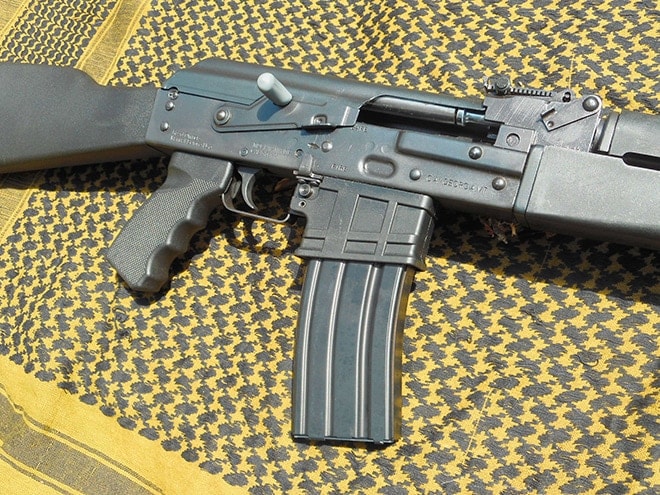 The rifle’s finish is also blued metal. This is unlike most AK’s these days which are often parkerized or finished with black enamel paint. There is also an adjustable gas plug originally meant for launching rifle grenades. There is no rifle-grenade muzzle device however, and it serves instead to assist the shooter if they’re using underpowered or low-quality ammunition. The furniture is plain black polymer and is profiled like standard wood NPAP furniture. To mount optics, there is a Yugo-style side scope rail. There is also a standard AKM slant-cut muzzle brake. Rounding out the features includes a bolt hold-open safety lever and a 30-round D&H magazine.

I find the bolt hold-open safety lever to be a double edged sword. The safety lever acts as a dust cover to help keep mud and grit from entering the action, but the large hole created to hold the bolt open defeats this purpose. There is a “peace of mind” factor, knowing your rifle is decidedly clear when going down range to place your targets. It also means that if I’m lazy and only want to clean out the bore, I can simply lock the bolt back and go to town with a bore snake rather than having to field strip the rifle.

Not included with the rifle are a manual, cleaning rod, sling, AK toolkit, or oil bottle — the kinds of things one would normally believe will ship with their rifle. The rifle also lacks a bayonet lug and a rear sling swivel. I find the lack of a rear sling swivel to be quite annoying as there is an AK-style front sling loop. 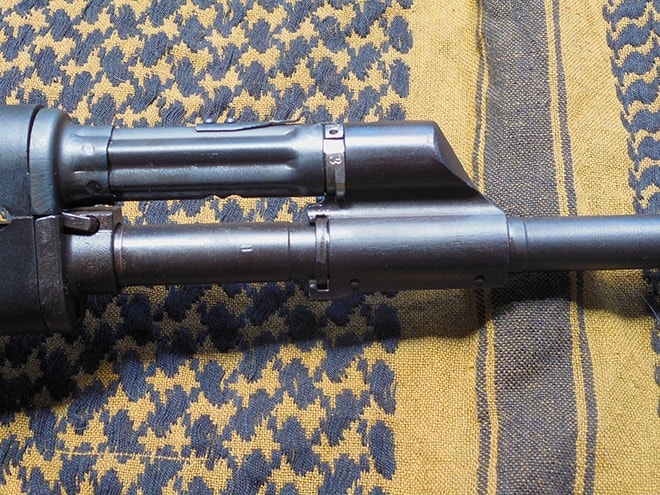 However what makes this rifle heretical to some is the magwell. Specifically it’s an adapter for AR-15 mags. Amongst AK purists, the idea that a Kalashnikov takes (supposedly) less-reliable AR mags is tantamount to high treason.

I find the idea of an AR mag adapter on an AK chambered in 5.56mm to be rather brilliant. There is a plethora of AR magazine manufacturers, all of which perform reliably under the harshest of conditions. I’m sure we’ve heard about how reliable AK mags are. However they are also heavy, large, and covered in sharp edges. Not only that, but inserting an AR mag straight into the magwell is much easier than to rock-and-lock an AK mag into place.

Practically speaking, I’ve found that it is much easier to find good AR mags over good AK mags. The majority of gun shops I visit are filled to the brim with Magpul, Troy, Brownells, Colt, and D&H magazines. Yet those same shops tend to only have a token selection of AK magazines. Most 5.56mm ammunition is also produced domestically in much greater numbers than 7.62x39mm, and wouldn’t be affected as badly in the case of an import ban or some other event such as a war.

On the range, I say the rifle performs well. The biggest limiting factor are the sights. Durable, easy to adjust for elevation and quick to acquire targets with, they are rather mediocre for precision shooting. The recoil of the 5.56mm isn’t punishing however, which allows the shooter to make quick follow-up shots. The heavy barrel also helps with accuracy and recoil management. 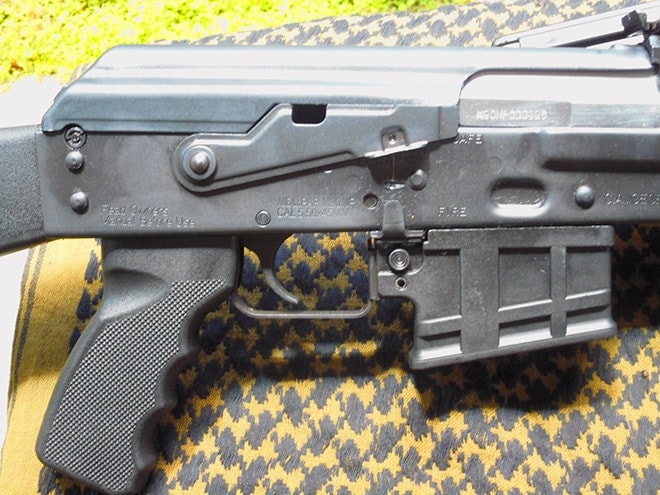 I find that although the rifle shoots a little high in my hands, I am able to remove rocks and logs on the 100 yard berm with much fun and ease. Slowing down my rate of fire, I am able to pull in one and three quarter-inch groups of five rounds apiece using both Tulammo and Wolf WPA FMJ ammunition while prone. Both rounds use 55 grain bullets and were shot at 50 yards.

The trigger appears to be Century’s new AK trigger and breaks around four pounds. While not a crisp break, it is certainly lighter than most factory AK or AR triggers. With the gas plug set to the middle position, I had no feeding or extraction issues (the mags I use are a D&H mag and a Colt 30-round magazine).

However what makes the rifle unique can also hold it back. Magazines don’t always drop free when the release button is depressed. Occasionally the magazines require some fiddling about to remove them. This wasn’t a problem during my latest range session, so I’m guessing it might be a question of some breaking-in.

As a word of caution, the lower handguard does not have a heat shield and it warms up rather quickly, so I spent most of my shoot using a magwell grip. The stock comb also has a tendency to slap your cheek bones and can be pretty painful. Moving the cheek weld forward helps to alleviate this problem. 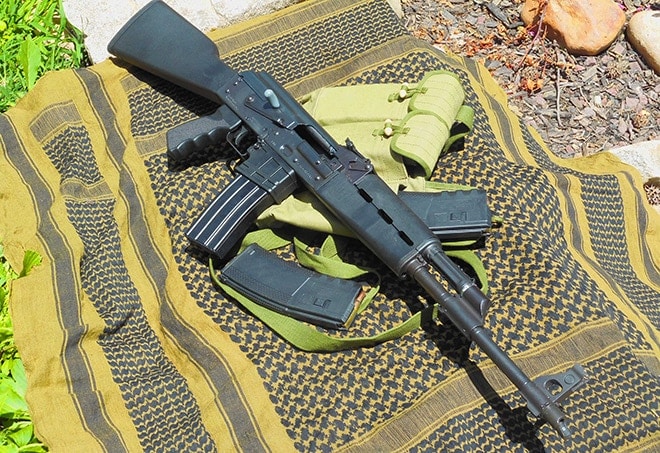 At the end of the day this is still an AK. They are a dime-a-dozen, yet this one manages to distinguish itself with it’s AR magazine adapter. It is not a $1300 rifle — there are visible machine marks and the furniture is undeniably cheap. However the Zastava M90NP is still a durable and reliable rifle that uses abundant magazines and ammunition. It manages to stand out in a crowded market, bring features that one normally associates with custom work, and do it for $629.