I’d like to begin this initial review by saying that this is just Guns.com’s first look at the Zip.  We’ve been in close contact with the folks at Zip and I expect to have an explanation of some of the issues I’m about to detail, and a fix.  And we intend to work with Zip until we get everything humming along nicely.

We like the Zip.  We want it to work.  I wrote to Doug Donnelly, President of USFA, this morning and presented this same information to him.  Donnelly’s response (which came in under a minute) was assuring; he immediately recalled the Zip, noting that what we’re experiencing is completely abnormal.

Let’s start back a ways.  A couple of decades back.  Donnelly, had an idea for a modular gun that would revolutionize the way we think about pistols.  But Donnelly was busy making revolvers, and had to wait for materials and production technology to catch up to his idea.

And now we have the Zip.  The Zip is an odd bird.  The pictures explain it well enough.  It doesn’t lool like, or feel like a gun.  Despite the absence of a traditional grip, the shooting hand falls into place easily enough. 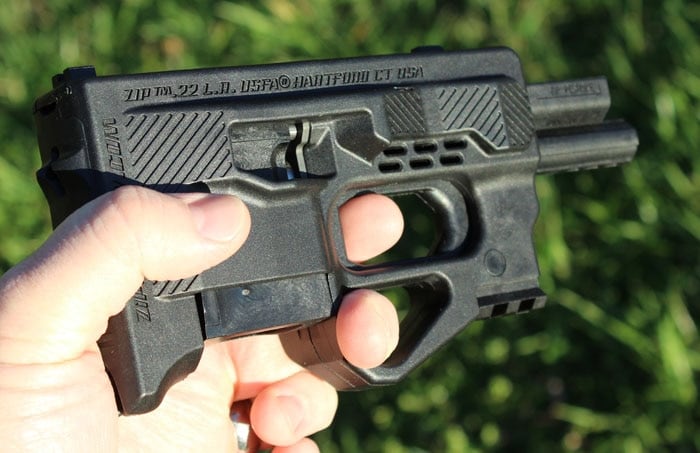 The Zip is built for fun.  This is supposed to be a plinker.  A pack gun.  Maybe a truck.  The polymer sights are not target accurate, but great for poking holes in cans.

The barrel is 5.25 inches long and configured something like a bullpup.  It is almost like holding onto a small rifle.  The position of the shooting hand on the back of the gun is more like a shoulder on a buttstock, as recoil energy drives straight back, rather than over the wrist (which hinges, adding to muzzle flip in traditional pistol designs). 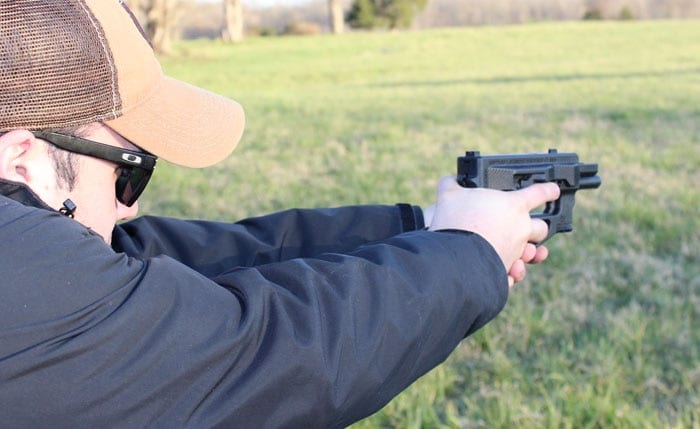 The future of the Zip is wide open, thanks to a design that allows for many variations.  The sights, for example, are built into a strip of polymer that is easily removed.  Underneath is the wrench needed for take-down.  Additional top straps have other options, including optics mounts and options for mounting the entire Zip under the barrel of an AR.

When combined with other options, like an optional threaded barrel, the Zip’s potential is endless. 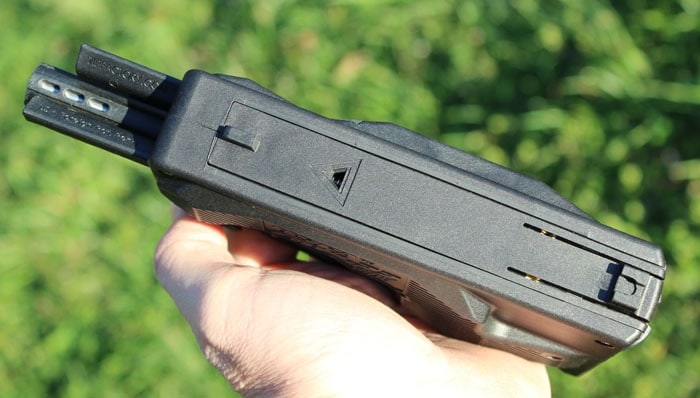 One of the more unique features of the Zip are the loading and restrike rods, which extend from the front of the frame.  They ride just above the barrel and are easily manipulated with a knuckle.  Some have suggested that this design puts the hand dangerously close to the barrel, but I never felt unsafe.

The trigger on the Zip moves straight back.  While stiff, it works well enough for the gun’s intended purposes. 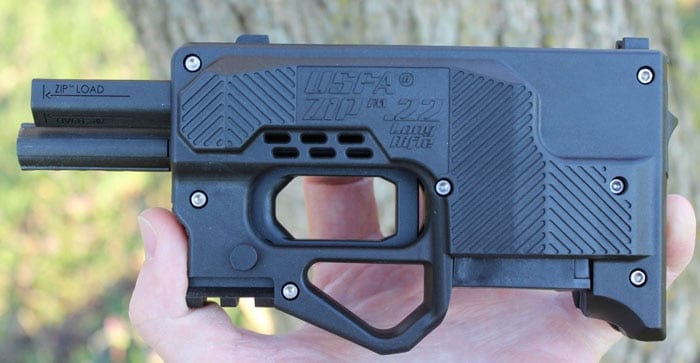 The gun works best with actual Ruger 10/22 magazines.  Longer mags, like the 25 rounders from Ruger or Butler Creek, may need a spring upgrade in order to keep up with the fast bolt of the Zip.  USFA offers upgrade kits for the longer magazines.

Ever since the Zip’s launch at the end of 2012, there have been various reviews and complaints from users about how tricky and picky the Zip can be.  Anticipating this, we made sure we did everything by the book.  The gun comes with two sets of springs (one for high powered .22LR, and one for standard loads).  In addition, the manual makes recommendations about which brands, grain weights, and powder loads work best.  We followed these recommendations to the letter. 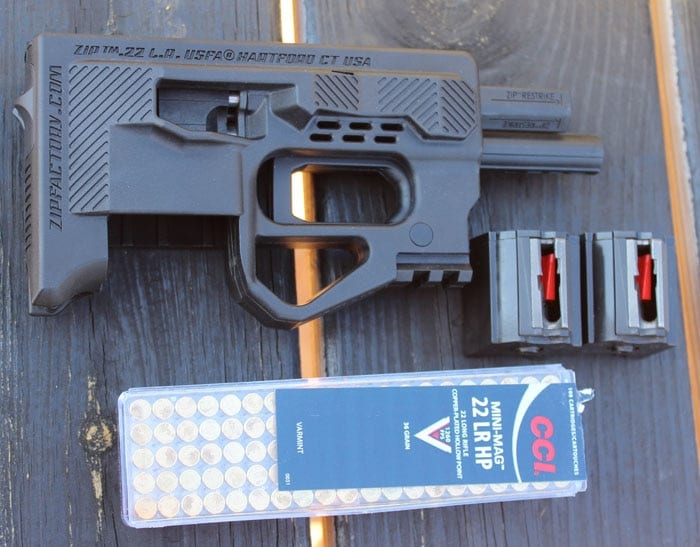 We tested both sets of springs.  For the video shoots, we used only the high power springs with CCI Mini-Mags, the top recommended load for the Zip.  We used two brand new Ruger 10 round 10/22 BX1 magazines, purchased just for this review.

The Zip could be a very useful tool.  The long barrel and rugged, lightweight design could make this a good pack gun.  Jacob was the one who had originally introduced me to the gun.  In his assessment, the Zip would make a great kill stick. 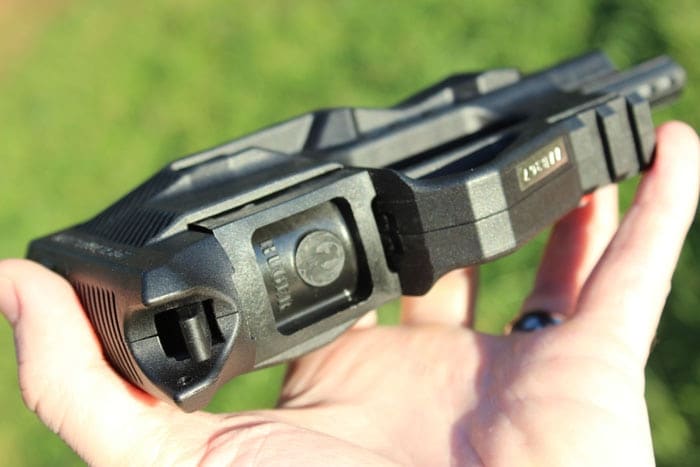 It is a unique design.  I can’t say that about many guns I see these days.  But this one has originality cornered.  And the modular design of the Zip means that the right side of the firearm (as opposed to an upper or lower) is the serialized part.  The rest of the gun, including the barrel, can be changed out with no difficulties.  So any new changes or modifications to the Zip can be picked up without any more paperwork.

Issues with the Zip

I’m not going to sugarcoat this at all.  The Zip we received for review has some serious issues.

Let’s begin with the most interesting.  This Zip, as the video above demonstrates, has a tendency to fire two-round bursts.  With one trigger pull, two rounds leave the gun.  The cyclic rate of fire is so fast that you can’t hear it distinctly.  But the sound has a bit more buzz to it.  On the video above, you can see the bursts in slow motion (or the ejected shells, at least).

This is a big problem.  While it never fired more than two consecutive rounds, I’m afraid it could.  It isn’t dangerous, really.  There is very little muzzle flip, so the two round bursts stay close.  But it is not normal.  And Zip assures me this is the first report of anything like this, and they’ll be dissecting it soon to figure out what’s up. 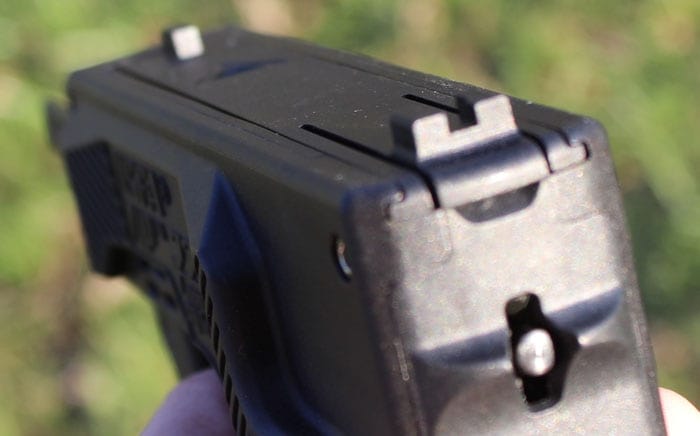 There were other random chambering and ejecting issues.  Some double feeds.  Some nose dives.  Some of the spent brass didn’t clear the chamber and the bolt would lock up on those.

Whenever there was a jam, either coming or going, the magazine would get stuck in the gun.  It often required two people to work it free, as there was often a live round in the chamber with another nosed right up against the rim.

Which brings us to an interesting design feature.  The Zip’s firing pin will fall when the trigger is pulled, even when the gun is out of battery.  While it is hard to imagine that this might cause an out of battery discharge, it has reportedly happened.

I’m not ready to give up on the Zip yet.  But I won’t be shooting this one again.

Joking about the situation at the range yesterday, Jacob said “the Zip is a great training tool for learning how to clear malfunctions.”  But it isn’t supposed to be.  It is supposed to be the future of fun.

Here’s my final thought.  The Zip feels to me like a prototype.  This one, at least, had prototype like problems.  But I can sense that USFA is onto something in the design that will be great.

We’ll be back with more on Zip.  And we’ll keep everyone informed on what USFA finds when they take this one apart.  Stay tuned.