How would you like a 1911 with a 5-inch barrel that can kick out a 230-grain slug at about 1,000 fps? Well, according to the testing Ballistics By The Inch have done that isn’t impossible without the right +P ammunition.

Standard pressure .45 ammo is usually more on the order of 850 fps. But what about pushing a 275-grain slug at that same speed or just a tich faster?

Back in 2004, Guncrafter Industries, Arkansas-based gun company that manufactures 1911-style pistols and accessories, introduced the Model 1 – basically a no-frills Model 2 – along with .50 GI cartridge. A couple years later a rail was added to the base model and was made available with a handful of optional features – abracadabra – the Model 2, or the Professional operator’s model, was born. 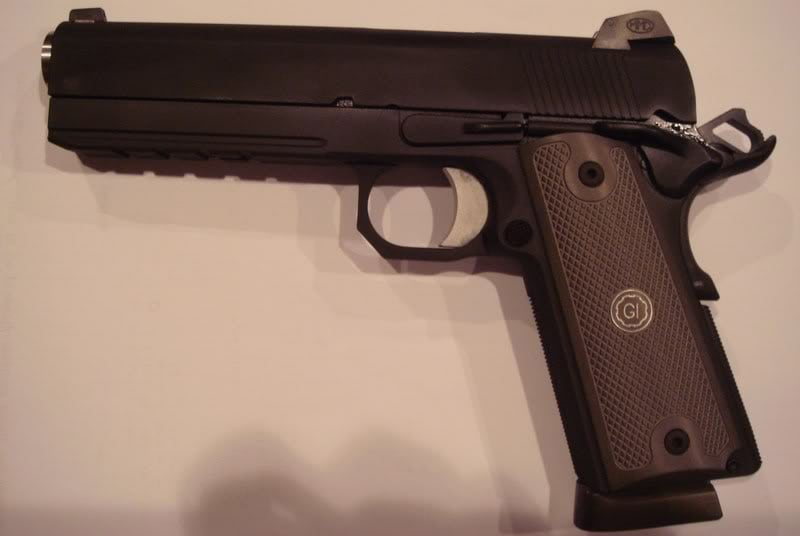 And the Model 2 is much like many other high-end 1911s. It’s got the same external dimensions, same design, same feel, and anyone who likes a 1911 can pick up one of these guns, and feel right at home with it. Even shooting the 300-grain load feels identical to shooting a standard 230-grain load out of a .45.

That’s because the folks at Guncrafter Industries set out to design a pistol that did just this, and largely succeeded. At least that’s my impression of the Model 2 after having a chance to look it over and shoot it.

This is not an inexpensive pistol, mind you. Expect to pay about $3,000 and more if you want any special features, or the .45 ACP conversion kit, which would allow you flexibility in ammo selection. Without too much effort you could kick that baseline price up another thousand bucks.

Whether or not it’s worth it all depends on the buyer. All I can say is that the Model 2 I shot, which was pretty basic (as such things go), was very high quality in every regard.

Fit and finish are excellent. The gun felt solid in my hand, and seemed like it will last for generations.

The Model 2 was more accurate than I am at 25 yards – another buddy of mine who shot it at the same time is a very good shot with a pistol, and kept all his rounds in one very tight group – and damn, what a big hole it makes!

Really, the main reason to get one of these is if you’re of the “big & slow” mindset, and want a round that makes a damn big hole with the first shot. As noted, the 300-grain slug Jacketed Flat Point we were shooting travels at about 700 fps, but feels like shooting standard 230-grain ball ammo out of a .45.

Shooting the 275-grain JHP does about 875 fps, according to Guncrafter Industries (I haven’t tested it myself), and that felt much more like shooting a full-house 10mm – it was decidedly snappier. The 230-grain JHPs we shot had less felt recoil from what I could tell.

Beyond the experience, the Model 2 will appeal to those who like unusual guns and have the money to indulge that taste.

There’s a lot of folks who won’t see the point of the Model 2 in .50GI. And that’s Ok. No one is going to force them to buy one. But there are those who collect the offbeat, and it is good for the rest of us that they do – they help to prompt innovation and improvement, and sometimes those changes make their way into the mainstream of firearm design.