Muscle cars. Raw power, roaring engines and a bad-ass exterior combine to create a staple of Americana. There is a certain aspect about all that power that makes you want one, even if your day-to-day job consists of carpooling to work and driving the kids to soccer practice. The muscle-car handgun equivalent is The Desert Eagle.

In the early 1980s Israel Military Industries and Magnum Research designed the gas-operated Desert Eagle in an attempt to offer handgun hunters a semi-automatic alternative to big bore revolvers that people traditionally associated with the sport. The result is the massive, heavy, magnum pistol loved and hated by so many today.

The Desert Eagle is a divisive, polarizing pistol — people either love or hate it. People like me love the impracticality of the weapon and understand that while a very powerful weapon, it’s mostly a novelty. Others love it because it’s the biggest and baddest handgun around. It is also instantly recognizable, even to people who know nothing about guns. The weapon’s detractors mostly cite its ammo and grip sensitivity as well as the general impracticality of it. The Desert Eagle will never replace your Glock 26 for CCW or your 12-gauge shotgun for home defense.

If the Desert Eagle doesn’t fill a niche, then why do people buy one? Because they can, because they’ve always wanted to or simply because. The Desert Eagle is as much a symbol of America’s audacity to go big or go home, as it is the posterchild for the statement, “Rights are rights, not needs.” 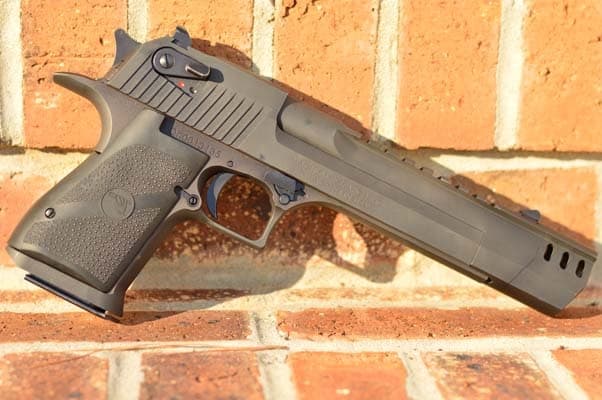 The Desert Eagle doubles as a warhammer when it runs out of ammo. (Photo by Jim Grant)

The model reviewed is chambered in .44 Magnum and features an aggressive muzzle brake that reduces the recoil to a very comfortable level, especially compared to wheel guns. The .44 Magnum Desert Eagle might not be the .50-caliber hand cannon its big brother in .50AE is, but there are few creatures on Earth that will take a well-placed shot from a .44 mag and keep ticking. Nevertheless, one thing all Desert Eagles have in common is the attention they bring the owner.

When I went to pick up the Desert Eagle from my FFL everybody in the store wanted to see and hold the gun and they asked a million questions. Understandably so — the gun is a beast. Not just in terms of firepower, but also in size and weight. The model XIX weighs in at 4 1/2 pounds. That’s more than three times the weight of a full-sized 9mm Glock.

Sights on the XIX are standard post and notch and remarkably accurate, thanks to the massive size of the gun causing an increased sight radius (distance between the forward and aft sights). The single-action trigger of the XIX also aids in accuracy, because it has a short, smooth, light pull. The weight of the Desert Eagle is helpful as well. When combined with the muzzle brake, the recoil isn’t much greater than a .40 caliber pistol.

Did I mention the Desert Eagle’s dust cover is railed? This means, if you were so inclined, you could mount a pistol or scout rifle scope, but be warned. The gun is already very heavy and slapping on a 2-pound scope will bring the package’s weight to that of an M1 carbine. 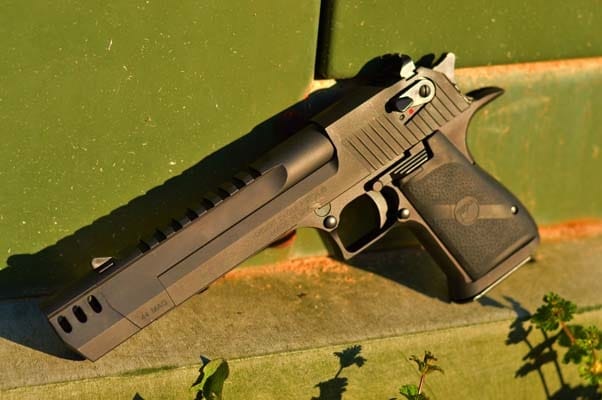 I tested the Desert Eagle with hundreds of rounds of Federal Premium Ammunition and Buffalo Bore Ammunition. Federal was manageable and even fun to rapid fire. Buffalo Bore, on the other hand, felt like holding on to a jackhammer during double tap drills.

While I feel the term, “Hand Cannon” is silly, there’s no better name for the Desert Eagle. With the power the XIX offers the shooter it becomes tempting to take old electronics to the range to see how much mayhem the pistol can cause. (Don’t shoot old CRT monitors, it’s really bad for the environment and your health) I enjoyed mercilessly pounding my steel silhouette target with the Desert Eagle.

The Desert Eagle is a very poor choice for a shooter’s first gun. Sure, it is a ton of fun to shoot, but only the tea-cup weaver stance will make the gun function 100 percent, the ammo is very expensive and bad flinching habits could take years to unlearn.

That said, if you own plenty of practical guns and want something fun in your collection that’ll get looks everywhere you take it; look no further than the Desert Eagle.