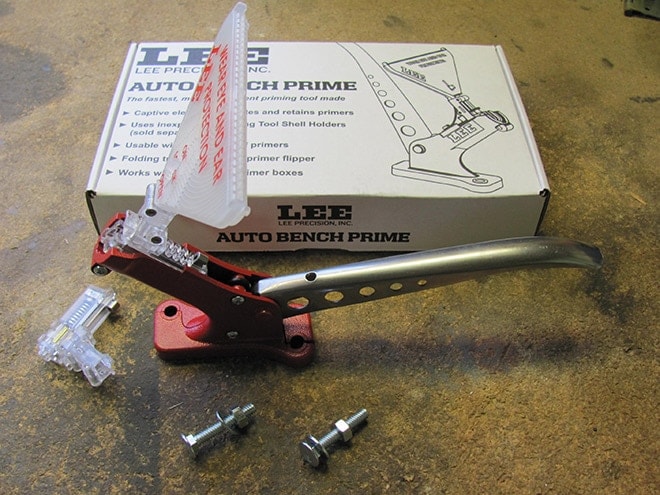 Even people who enjoy the handloading process like myself want it to move along as efficiently and expediently as possible. Despite finding it meditative to load cartridges by repeating the same hand movements thousands of times, when something goes wrong, I get snapped out of that lever cranking zen and pushed instantly into the realm of frustration. It’s usually then that I realize I only have another 45 minutes to make ammo for an upcoming match.

What this means to us dedicated handloaders is that the tools that work consistently are the most highly prized. I was hoping Lee’s Auto Bench Prime would assume a place in the pantheon of well-regarded and highly prized red reloading equipment in my home. Sadly, I can’t say it measures up to the standards Lee products usually carry for one reason—stoppages. 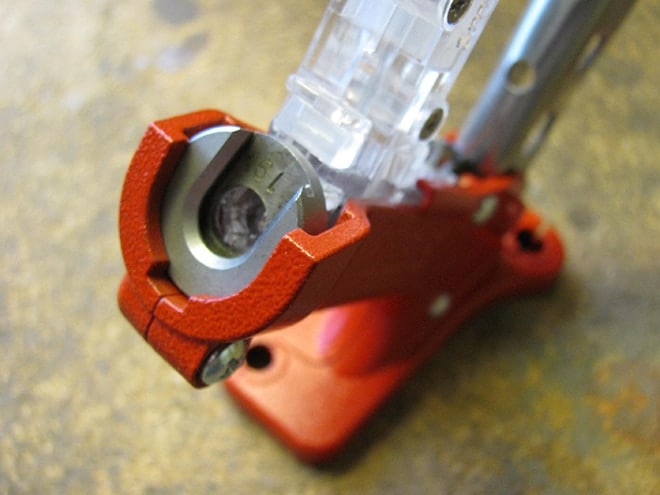 Shell holder. Shell holders can be used for any number of cartridges and Lee products. (Photo: Andy C)

The Lee Auto Bench Prime is a relatively new product, having been released within the year. While Lee presses have their own priming mechanism and they also offer very serviceable hand priming units, this is meant to be a permanent alternative and to provide a designated priming station to handloader’s benches. This should provide a more stable, easier-to-use tool that will make the priming stage of reloading move faster and smoother.

For $37, you get most of what you need: the Auto Bench Prime’s metal body and handle, a plastic primer tray and elevator assembly, and a pair of bolts and nuts made to fasten the tool down. You also get some standard Lee quality black and white instructions and safety warnings. The whole affair fits into the hardcover book-sized box. You still need Lee’s shell holders designed for their priming tools, but if you have any experience with Lee products, you know this heading into it.

The Auto Bench Prime is based on a small metal block with two holes for anchoring the contraption. It’s handle is gently curved and pretty ergonomically designed, something Lee products are known to skimp on. The body is a red hunk of metal with a ram for pushing in primers and the same internal mechanisms as the new Auto-Prime XR. It also uses the excellent new tray design of this tool.

It took about two minutes to put together and lightly lubricate, which helps facilitate easy function for longer periods of time. So far, so good. I bolted the Bench Prime to a piece of wood and clamped that down at my work area as I was not yet sure where or if I wanted to invest precious reloading bench space on this thing (though this could perhaps be advised for optimal usage). The Bench Prime was, by my account, securely mounted. Then, I grabbed a few boxes of primers, some resized and decapped .38 Special, and went to work. 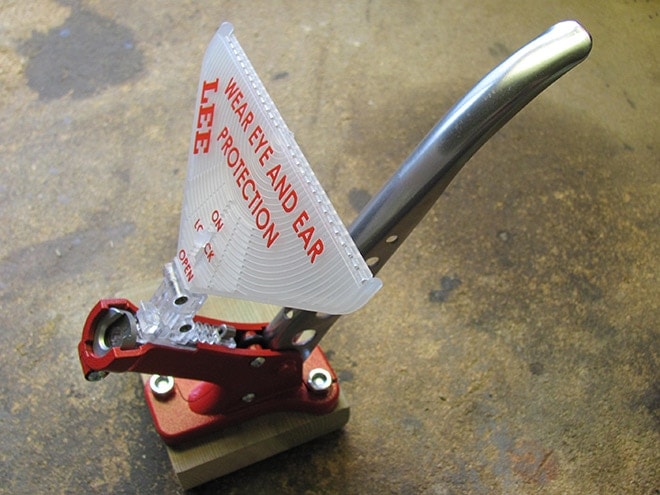 The flip up primer tray is a welcome feature on Lee reloading tools. (Photo: Andy C)

I’ve now used the Bench Prime to load a few thousand handgun rounds and a couple hundred rifle rounds, using varying types and manufacturers of primers. I expected it to deliver better performance than my Auto-Prime XR with the updated tray in terms of time spent for rounds primed, as well as a better overall experience stemming from the stable mount. I have to say I am disappointed. The Bench Prime has a few minor, annoying idiosyncrasies and one dealbreaker.

First, the primer feed isn’t smooth. No matter what brand or type of primer, to keep a steady flow of primers into the ram you need to give the tray a little jiggle every now and then. It’s like something is slightly off with the geometry at the mouth of the feeding ramp that snags a primer and requires a gentle rattling to dislodge them. While this isn’t the end of the world, it adds up to what amounts to an extra step every five or ten primers—giving the tray a tiny rattling. It doesn’t need a lot of force, but if you don’t do it, you’ll find suddenly your priming tool isn’t pushing anything into the cartridges despite the tray being fully loaded. 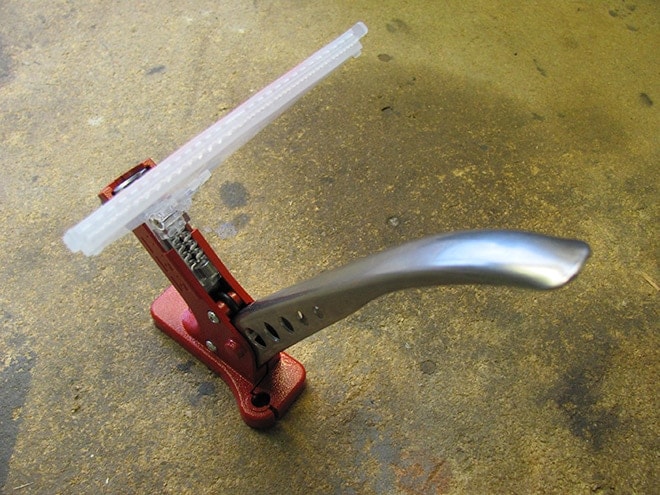 Easy to operate lever for the Lee Auto Bench Prime offset by inability to see how the primer seated. (Photo: Andy C)

Another somewhat-annoying flaw, one that the Bench Prime shares with Lee’s Auto-Prime XR, is that there’s no way to know if a primer falls into the ram at the wrong angle, while operating the tool with a badly seated primer in it can seriously gum up the works, leaving the case currently in the shellholder very difficult to remove. This is because of the design of the spring mechanism used to push the ram and the result of a wonky primer is usually a significant work stoppage as you disassemble the mechanism in order to pry the offending primer out and resume work.

And this leads me directly to the biggest issue with the Bench Prime—frequent work stoppages because of poor feeding. Not a minor stoppage requiring the tray be rattled, and not because of a crushed primer. Instead, the primers frequently get caught in a bad spot between the primer trays feed ramp and the ram. This renders the device inoperable. You can work the handle all you want but primers aren’t going onto the ram. When this happens, you must to disassemble the contraption and wrangle out the stuck primer, a frustrating exercise. 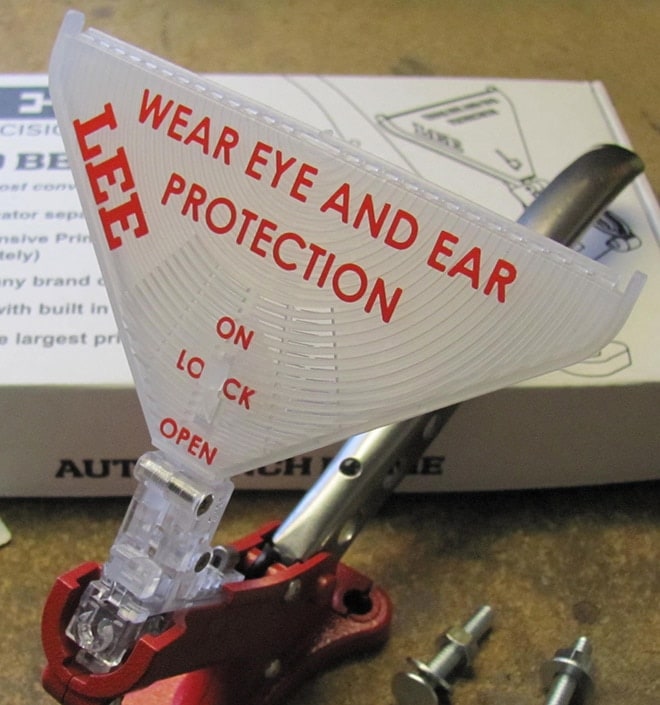 Though the loading tray has its advantages, the inability to see the round seat leads to a dealbreaker. (Photo: Andy C)

This would be entirely forgivable if it happened occasionally—say, once every few hundred rounds. It’s a simple machine and funny things happen. But for me this happens a lot. I average getting two of this error per box of 100 rounds, meaning two total work stoppages per box of primers. That’s just not an acceptable rate, and sometimes it happens much more. Because of this fault, I can prime cartridges faster on the hand held Auto-Prime XR. That’s not a good sign.

I don’t know what’s causing this. I have no problem doing a little filing or sanding on this kind of thing if there is a burr somewhere causing the problem (although I don’t think this should be a consumer obligation). But as far as I can tell, there isn’t any. All the parts seem to be in perfect working order.

This is simply a deal breaker for me, but for the sake of fairness, I’ll also comment on some of the Bench Prime’s positives. These are common among Lee products. It’s sturdy, it’s affordable, and the new Auto-Prime tray is very handy with its clever folding to open/close and a way to pause the feed of primers with a “lock” mechanism. But none of these praises can make up for what I consider a fatal shortcoming, the primer seating issue. 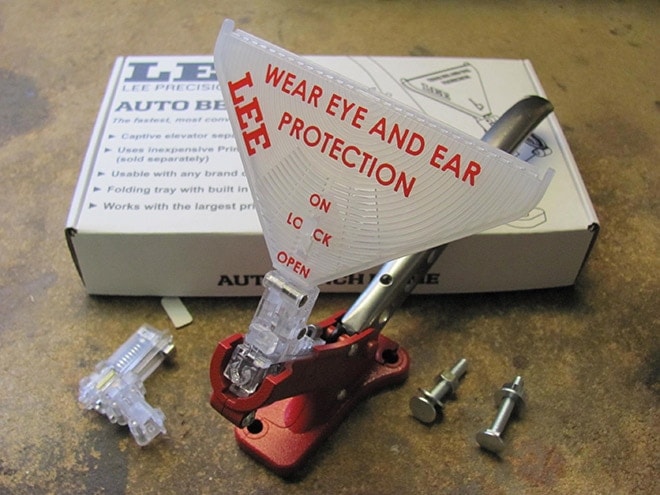 This is the first time I’ve ever been disappointed with a Lee product. I learned to load using an old Lee Loader in a cardboard box, and I still use a Lee Deluxe Turret for almost all my hand loading needs. My bench has a distinct red motif.

But the Bench Prime has one job, and it doesn’t do it very well, especially given the number of competitors. If you don’t necessarily want a mounted tool, the Auto-Prime XR provides a more functional and portable alternative, and is what I predominantly use. If you want a mounted priming tool and aren’t interested in spending a bunch of extra time on clearing malfunctions, I suggest you look at the RCBS tool—which has been excellent in my experience. It costs a lot more, but time is money, and you’ll unfortunately be wasting a lot of time with the Lee Auto Bench Prime.