Gun companies have marketed the zombie apocalypse hard this year. Perhaps they know something the rest of us don’t like the 2012 end of the world prophecy involves zombies instead of a flood or earthquake. And maybe they’re right. Or it’s just a marketing trend. Either way 2011 almost feels like it was the Year of the Zombie (sorry, 1911). So it’ll be an interesting holiday shopping season for zombie lovers with all the zombie apocalypse guns and gear available.

Of course, this zombie thing is starting to really ruffle some feathers, we will admit. Fortunately or unfortunately, we love ’em. As a metaphor for disaster and inspiration for preparation, they’re unmatched. But then, they’re zombies, which are also hilarious and fun.

Judging by the fact that the US government and even the UK government also see the merits of zompoc prepping, the idea has clearly entered the mainstream.  “No, I don’t really think there’s going to come a time when we have to go into the woods with our guns and gear and MREs and fight zombies. But anyone who didn’t learn a thing or two from Katrina won’t be ready when a flood hits. This whole zombie apocalypse, face-eating monkeys, robot Joe Biden army nonsense is a euphemism for general preparedness. And if you’re ready for the zombie apocalypse, a hurricane is just a storm.”

So who cares if that machete is zombie-branded, machetes can come in real handy, and if that’s what winds up getting you a machete, or any other of KA-BAR’s ZK tools: 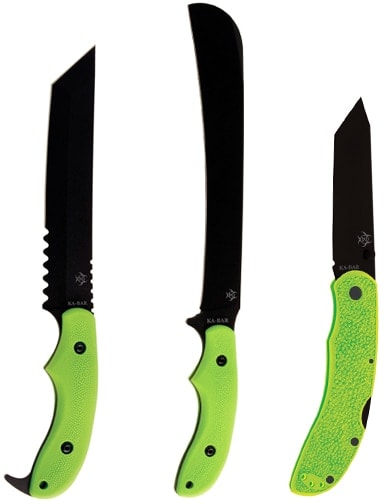 “Be warned, if you do buy all of them, some people have seen green in their urine, greening of the whites of their eyes, and a general greening of their pallor.  But none have died at the jaws of zombies.” $13 to $70.

Of course, the main draw for zompoc are the guns. Shootin’. Spike’s Tactical and other boutiques have been making zombie-branded ARs since forever, but nothing has ever come close to this: 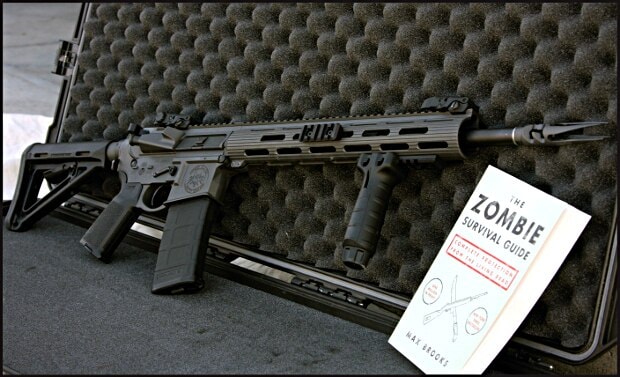 “The STS Limited Edition Zombie Gun looks like it was born out of one of these debates: STS uppers and lowers, Magpul and Tango Down furniture, a tough Cerakote finish, a match-grade, free-floated 16-inch barrel, and KNS pins. Specialized Tactical Systems (STS) really looks like they poured over every possible part of their STS Limited Edition Zombie Gun.  Even the safety selector are tweaked (they’re labelled “SAFE, NINJA, and JEDI”).  Also cut into the gun are ten zombie survival rules. Which is all very boss.” MSRP is $2500.

And it’s not just little gun companies, either.  Ruger put out a LCP-Z for tackling the living dead while still keeping a low profile with your concealed handgun. 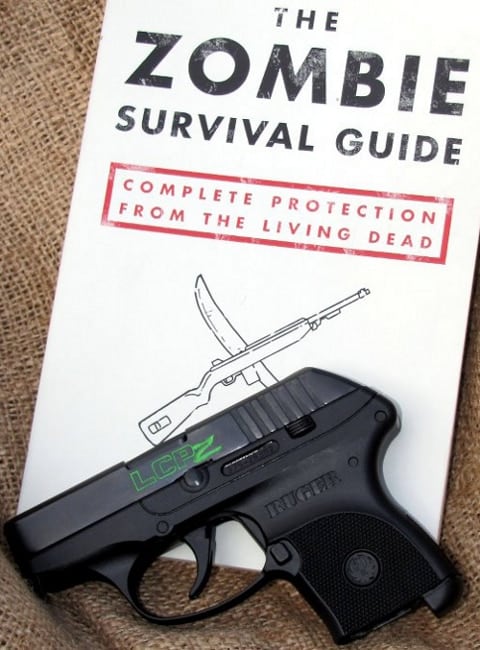 Ruger’s gone and made a zombie-slayer LCP.  Not a Mini 30.  Not a GP100.  Yep, when all bets are off and the world is out to eat your brains, you know you can always trust your good ol’ pocket pistol, your single-stack 9mm subcompact, your LCP. $360 for the whole package.

And while not zombie-specific, we can’t help but think the Mossberg 500 chainsaw is more-or-less marketed to the same audience.  “Thankfully for all the Bruce Campbell lovers and zombie haters out there, our good friends at Mossberg have been so kind as to solve this issue by affixing a chainsaw grip to the aptly named new Mossberg 500 Chainsaw.

According to the manufacturer, the chainsaw grip gives “this pistol-gripped model added muzzle control.” And get this: the 500 Chainsaw includes not one … not two … but three fore-end rails with removable side rails, meaning this gun can be customized to do much more than cut wood.” MSRP $460.

But we also thoroughly endorse the Mossberg Just-In-Case. “Ever have one of those days where you crawl out of bed and think to yourself, ‘Damn it, today’s gonna be one of those shotgun days.’  And you never know when you’re gonna need that shotgun.  Well the world can thank Mossberg for their 500 Just In Case.”  It comes with a floaty, watertight case, and a simple survival kit. Depending on kit, it’ll run you $375 to $425.

Of course, you can prepare any firearm for the zompoc with some of this zombie-purposed Hornady Z-Max ammo: 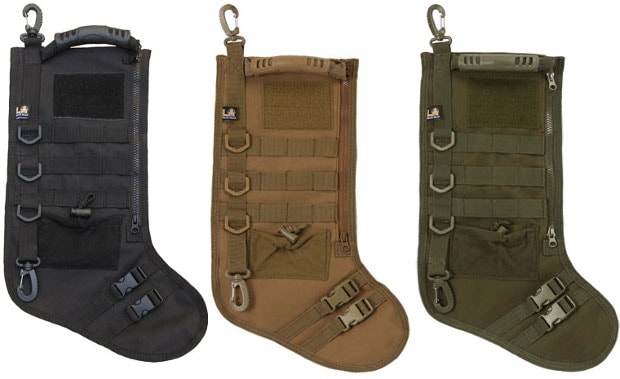 And while ammo makes a great stocking stuffer, (make sure to check out these heavy duty tactical stockings for extreme ammunition stocking stuffing) sometimes it’s best to just curl up with some good reading, and for that it’s hard not to recommend, in no particular order, Can You Survive the Zombie Apocalypse?, Zompoc: Weapons & Tactics for the Zombie Apocalypse, The Zombie Combat Manual: A Guide to Fighting the Living Dead, and in case you wind up making the ultimate heroic sacrifice to help your fellow survivors, The Zombie’s Survival Guide: Thrive In The Zombie Apocalypse After You Turn…

What, dear zombie lovers, is on your wish list this year?