Henry Big Boy Rifle Review: A Gun You’d Pass on to Your Kids

Looking for a real ‘old school’ lever-action gun? Then ignore Winchester or Marlin, and go for the Henry Repeating Arms Big Boy.

Don’t get me wrong. I own a Winchester 94AE, and think that it is a fine, well-made rifle, one with a long pedigree and lots of history. And the same is true of your Marlin lever-actions. But if you want the look and feel of a real 19th century gun, take a gander at the Big Boy.

Why do I say this? Well, for several reasons. The very obvious heavy brass receiver. The heavy octagonal barrel. The classic lines of the stock. The brass buttstock. The complete lack of a manual safety. All contribute to one very sharp looking, well-handling, old school lever-gun.

There’s another reason why the Henry Big Boy is old school, in my opinion. It’s because the entire gun – all the parts, all the fitting, all the work on it – is from the US. That matters to some folks. It matters to the people at Henry, just as the quality of their products matters. That much is evident in the fit and finish of the Henry Big Boy.

Prior to our BBTI tests of the .44 Special/Magnum cartridges I hadn’t shot a Henry. So I enjoyed getting to know the gun. I particularly enjoyed the exceptional quality of all the materials and how they were brought together. What do I mean? Well, the look of the gun is quite good. But so is the solidness of it. The one we were using was relatively new, yet the action was smooth and felt like it was well broken in, with minimal roughness either to racking a round into the chamber or in firing it. The trigger wasn’t light, but it wasn’t particularly hard, either – about what I want with a gun that is going to be used for hunting or a relaxed day at the range.

As noted, the fit and finish is quite good. Beautiful, nicely polished walnut stock front and back. The receiver, buttstock, and front brass fittings offset the richness of the walnut very nicely. The octagonal barrel had a deep bluing with gold stamping, and sported crisp lines and a nice sheen.

The iron sights are classic, and perfectly suitable for out to 50 yards without a problem. A good shooter with younger eyes than I have could likely do fine out to 100 yards with just them. Certainly the gun is accurate enough. And Henry offers a cantilevered scope mount if you want to put some optics on it for longer range.

Performance was quite good. The 20-inch barrel is a very good choice for the .44 Magnum cartridge (as it would also be for .45 Colt and .357 Magnum), as our tests showed – it maximizes the power of those rounds. Note that the Henry is almost 50 percent heavier than my 94AE, overall. The heavy barrel helps to really suck up recoil, and allows the shooter to stay on target for follow-up shots. I’m not sure I would want to haul the thing through the woods all day long while hunting, but it certainly is a very stable platform when it comes time to shoot.

One thing about the Henry Big Boy that should be taken into consideration: it is a tube-loading gun. You have to rotate the substantial solid-brass plunger, then pull it most of the way out of the tube magazine, until a slot for loading the rounds is open. Now, this works just fine, and the mechanism is one I’m used to from owning other tube-loading guns. For hunting or target shooting, there’s no problem at all. But if you’re thinking of having this gun serve for a home-defense weapon, consider how this would be problematic; it would be very difficult to reload or top-off under any kind of defensive scenario I can come up with.

MSRP is $899, but online you’ll be paying anywhere between $700 to more than $1000. As the old adage goes, you get what you pay for. And this would be a smart investment.

I think that the Henry Big Boy is an excellent gun, and would likely serve you quite well for a lifetime, becoming an heirloom you could pass on to your kids. 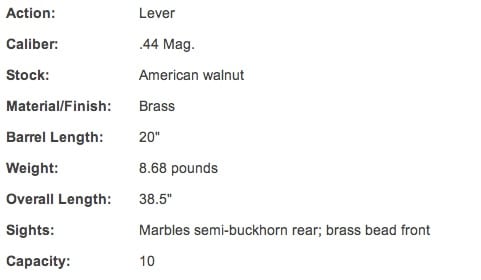