There is no way to misconstrue the intended purpose of the Henry US Survival AR-7.

It isn’t the US Hunting Rifle, or the US Plinking Rifle (although the quirky little gun excels at both). The AR-7 is a last resort, a well built tool designed to provide food for a short and desperate period of time and if you are ever in a situation that would require just such a gun, it would be better to have one than not. Like the Boy Scouts say—be prepared.

The AR-7: A survival rifle

The history of the AR-7 is a bit choppy. The original survival rifles were based on Stoner’s designs. They’ve been made by a variety of companies. Henry’s rifles may lack some of the character of the early guns—many of which had some trippy, swirly plastic stocks, but they’re tough as nails.

The AR-7 and earlier survival rifles were meant to provide a dependable weapon system for those lucky enough to survive a plane crash. The older M6 Aircrew Survival Weapon used a combination of .22 Hornet and .410 shot-shells.

But the AR-7, especially Henry’s incarnation, is a highly evolved tool. It shoots .22 LR cartridges. And rightly so. Even if I were to crash my airplane into my local gun store, I may not be able to find .22 Hornet.

Did I mention the AR-7 is made by Henry? Henry Repeating Arms, makers of exquisite lever-action rifles. These unassuming rifles are built with the care and precision that defines Henry’s other guns. And, like the rest of the catalog, the AR-7s are made in the USA.

This rifle is a solid mix of aluminum, steel and more durable plastic. The receiver is steel. The barrel is steel, though it is a liner of steel housed in aluminum. The stock, a bulbous thing built of acrylonitrile butadiene styrene, is durable and houses the barrel, up to three magazines, and the receiver.

The magazines are the exceptionally well built. They are steel and hold eight rounds. The magazine has two distinct features. First, the spring on the side that guides each round. This spring is a later addition and helps move the rounds from their double-stack overlap into single file.

The other feature is the feed ramp. Each magazine has a small insert that functions the way a feed ramp might in most other automatics. While I would like to have more than eight rounds, I take what I get when I’m trying to survive.

The sights are interesting. The rear ghost ring sight is adjustable, and has two holes (one smaller than the other). If the larger hole is too much, flip it over and the ring will be smaller. The small hole is for daylight shooting and the larger hole allows more light to come through making it easier for lowlight or night shooting.

The front blade on the new AR-7s is plastic—and flaming orange. It is easy enough to see—both on the black gun and through the rear sight. The blade is wide. I have a hard time placing exacting shots at distances over 50 yards, but anything under that outer limit is fair game.

Lopsided. I take that back. It looks lopsided, but the hollow stock is nicely balanced with the light barrel. The controls are a bit stiff, but it’s brand new and should break-in. The safety is a simple lever that blocks the trigger. The trigger pull itself is gritty and hefty, but the break is predictable. After the first 20 rounds, or so, I had the feel down.

There are some guns that are so ergonomic that I pick them up and they feel like extensions of my arm. Not the AR-7, however, the more I shot the gun, the better it felt. What I had originally dismissed as an awkward design has more to do with the necessity of the package. And I quickly acclimated to the odd feel. It took me less than half an hour, I’d say, and now I don’t even notice it. It is as natural as most other guns I shoot.

While I usually spend time talking about the feel of shooting, I think that it is more important to talk about how the gun feels when it is all packed up. It is compact and light. It packs easily, which is important—it means you won’t complain about having to take it with you in the boat, plane or pack.

Yes and no. As the video shows, I was shooting out at a beaver pond near my house. I love shooting at floating targets because I can easily judge where my shots are hitting. When I was satisfied with the AR-7, I decided to give it one last test. I packed up the gun and tossed it into the pond.

It floated for a minute or so. The butt end of the stock dropped first. The whole package bobbed this way for as tiny bubbles rolled out of the stock screw slot. Then it sank.

But this would be so easy to fix. A bit of non-expanding spray foam inside the seams would do it. With no place for the water to go, the whole thing would float fine. As is, it would have floated long to be retrieved.

And it floats much better than a Marlin Papoose, or a Ruger 10/22. Just a thought. 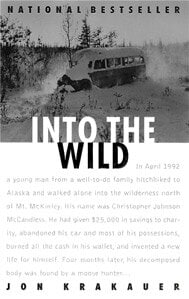 So what does survival entail—and how capable is a .22 LR? There is a famous example of survival gone wrong—Christopher McCandless. McCandless’s story is documented in Jon Krakauer’s book Into the Wild. In 1992 McCandless wandered off into the Alaskan wilderness with very few supplies, but he did take a Remington and 400 rounds of .22 LR.

McCandless is a tragic figure. He put himself in his survival situation voluntarily and his adventure went south fast. In a desperate attempt to feed himself he killed a moose—with the .22. Though he was able to kill the animal, he wasn’t able to use much of the meat. He had no way to keep the meat in the heat of the Alaskan summer.

You need much more to survive than a rifle. McCandless figured that out the hard way, but you might as well be prepared.

Take it with you when you go. Why not? It is so incredibly convenient. If you need it, you will have it. If you don’t need it, take it out anyhow and blow through some .22 LR. Practice, plink, and have fun. If you ever do need the rifle, you will also need to know how to use it.

And, like Henry’s ad campaign says—don’t leave civilization without one.