If you’ve ever fired a 180-grain boar-slaying .357 Magnum round and thought, “Geez, that’s it?” you’re either Dolph Lundgren’s big brother or you’re firing a Henry Big Boy rifle. The typically snappy .357 Magnum is easily tamed by this luminous lever-action brass beast. If you thought firing the normally stout Magnum was paradoxical, try firing a .38 Special round from the Henry.

You’ll be all but certain you have a squib stuck in your barrel, the recoil is that light. If you’ve fired Henry’s Goldenboy or Frontier rimfire rifles, you have a very close approximation of the recoil of this full-caliber gun.

The Big Boy rifle shares more than its appearance with Henry’s most popular rimfire, the Golden Boy. The action is nearly identical. Most modern lever-action rifles feature a side loading gate on the right side of the receiver, but Henrys feed from the muzzle-end. This is inarguably much slower than a side-gate, though not as inconvenient as it sounds.

To reload, a shooter must first open the action to ensure it is safe. Then grab the knurled knob at the end of the magazine tube and twist and pull the combined inner tube, spring and follower free. Then, add rounds into the outer tube and replace the inner one. If the Henry only held a handful of rounds this would be annoying, thankfully, it holds 10+1 of either .357 Magnum or .38 Special. 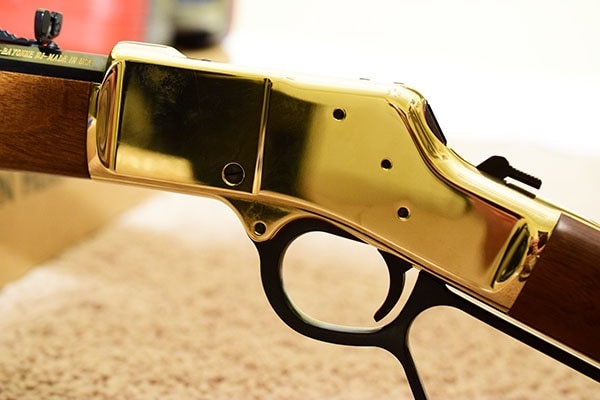 Most lever-action shooters, Cowboy Action shooters excluded, don’t buy a lever-gun for how fast it reloads. They buy it for nostalgia, simplicity of use and durability.

The Henry is gorgeous and makes you feel like John Wayne — it’s true — but it is a very functional rifle as well. The Henry’s 18-inch barrel squeezes enough velocity out of the .357 Magnum cartridge to put it within spitting distance of the 5.56x45MM cartridge’s energy. While this might not seem too impressive at first, it means that extra foot of barrel has nearly doubled the cartridge’s power, all while kicking less than a standard AR-15. 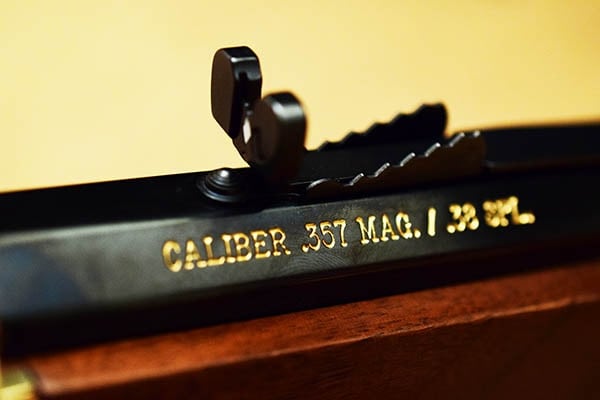 The ability to chamber both .357 Magnum and .38 Special rounds makes the gun incredibly versatile, especially when used in conjunction with a revolver of the same caliber. When paired together in a bug-out situation, a shooter could share ammo between the two and use any .38 or .357 Magnum round he finds. Although the Big Boy’s weight and solid-brass receiver would make carrying or hiding the gun very difficult.

The receiver is made from solid brass and shines like justice in the noon-day sun. Depending on the time of day this is either awesome or annoying. The brilliant shine from the receiver makes using the irons at certain times of day difficult, even with polarised sunglasses. However, you can circumvent this issue by using a scope or red-dot, since the rail covers the portion of the receiver between the shooter’s eye and the rear sight of the rifle. 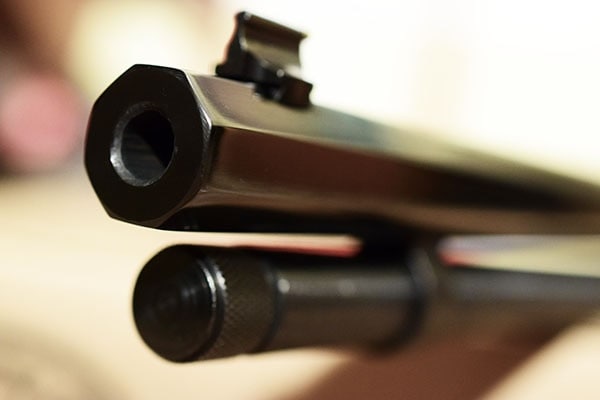 The rear-sight is the traditional buckhorn type and the front is a brass-bead embedded in a front post. The sights are period-correct but not terribly user-friendly. Younger eyes will have no issues plinking bumblebees at 30 yards and squirrels at 50, but for those of us who wear glasses as more than fashion accessories, a scope is tremendously helpful.

One interesting aspect of shooting both .38 Special and .357 Magnum rounds is the shift in point-of-impact. Soft-shooting .38 rounds would take a dirt nap at 75 yards while the .357 Magnum rounds would only drop a few inches at 100. Additionally, different loads of .357 would sometimes shift their point of impact two or more inches vertically. So when zeroing your rifle be sure to use the same round you intend to hunt with.

Accuracy with .38 Special rounds was acceptable, grouping around 3 1/2 inches at 50 yards, but was superior with the full-powered .357 Magnum cartridges. The hotter Magnum rounds grouped around 2 inches at 50 and at 100 — despite a 3-inch drop — still grouped around 4 inches. While certainly not a match-grade bolt-gun, four MOA is acceptable for hunting given the effective range of the cartridge. 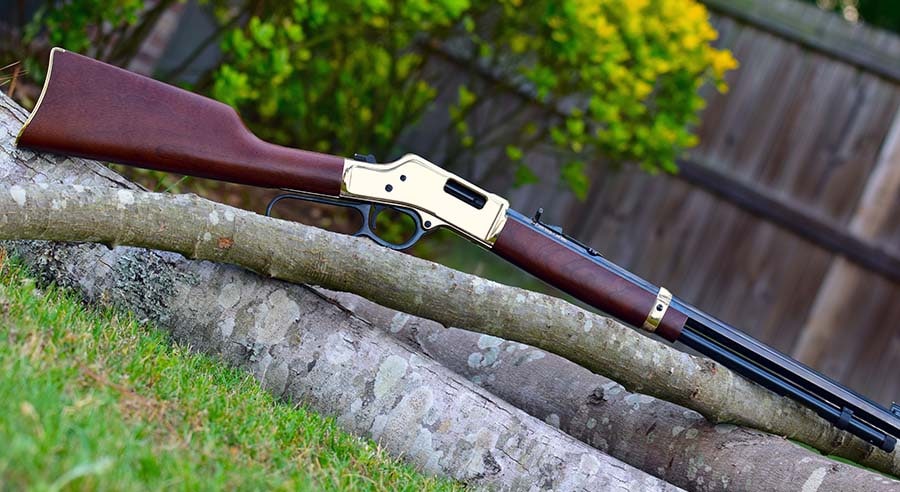 Ten rounds of .357 Magnum in a functional work of art (Photo by Jim Grant)

The only area lacking with the Henry is economy of ammo. Shooting .38 Special rounds isn’t too expensive, but the Magnums are quite pricey. You could argue that is not the gun’s fault, but I disagree. The Henry makes shooting Magnum rounds too fun. I chewed through a month’s worth of .357 Magnum in a single afternoon and I wasn’t even sore. The only fatigue I felt was in my arms from the Henry’s hefty octagonal barrel. Frankly, I can’t afford to keep shooting 500 rounds of .357 Magnum a day. On the upside, the rifle has an affordable MSRP of $899, leaving some room in my wallet to buy a reloading setup to feed this brass beast.

With a solid brass receiver and a magazine tube that holds ten rounds of potent .357 Magnum, the Big Boy is more than a handsome face. It offers Old-West firepower in a soft-shooting accurate package.