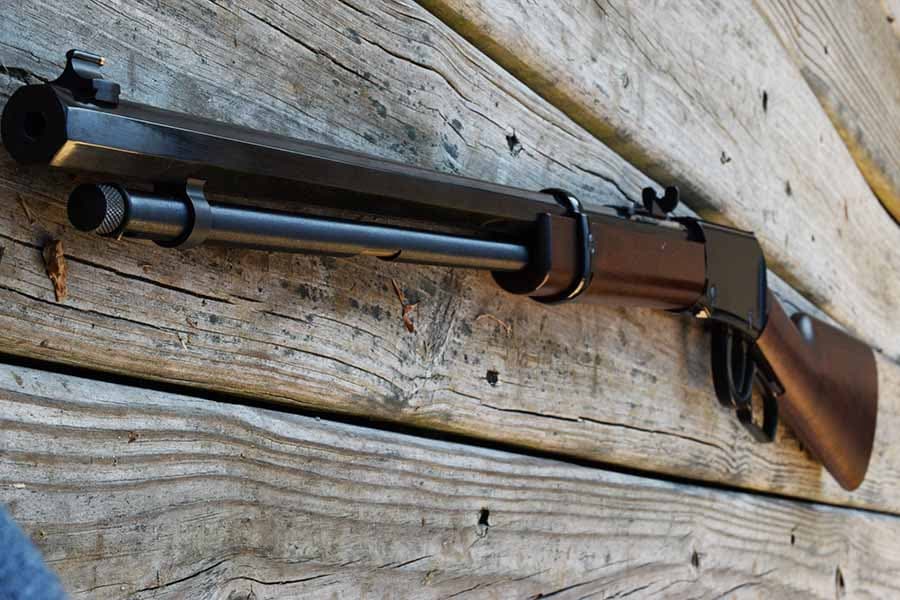 Whenever I pick up the Henry Frontier, I feel the need to yell, “Yeehaw!” (Photo: Jim Grant)

If you’ve ever spent a sleepless night groggily watching infomercials, you’ve no doubt seen Henry’s “Made in America or not at all” commercial. I’ve probably seen it around 200 times by now, which speaks more to my insomnia than the ad’s prevalence. The tasseled jacket, 10-gallon hat, deer-skin gloves — they bombard you with nostalgic imagery of the Old West. Say what you will, but Henry’s ads work. 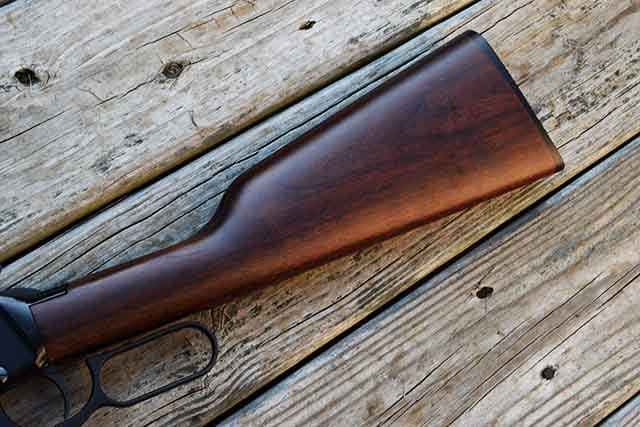 While the Henry Frontier Octagon isn’t a replica of any particular lever rifle, it manages to evoke feelings as if you were watching a good Western.

One aspect that distinguishes the Henry from the competition, is its 20 inch, blued heavy octagonal barrel. Not only does this help to give the advantages of a bull barrel, it also gives the rifle its identity and a way to stand out among the crowd. The wooden furniture is made from a nice piece of American walnut with a satin finish. Not too flashy, but not too plain either. Capacity is 24 rounds of .22 short, and 16 rounds of .22 LR.  The receiver cover is an aluminum alloy with a baked on black finish. It’s plain, but it does its job while looking nice and saves on both weight and cost.

Unlike many bull barreled rifles, the Octagon Frontier is topped with iron sights. Specifically a Marbles semi-buckhorn rear sight, and a brass bead front sight. For a little extra class, there is a white diamond insert in the buckhorn rear sight. While it looks great, and is historically correct for old fashioned rifles, they can be a bit tough for those without perfect vision. If you don’t have perfect eyesight, or prefer to use optics regardless, the top of the receiver cover is grooved for mounting optics. Hi Viz also sells a fiber optic front sight, while Williams and Skinner Sights produce aperture sights for the rifle. 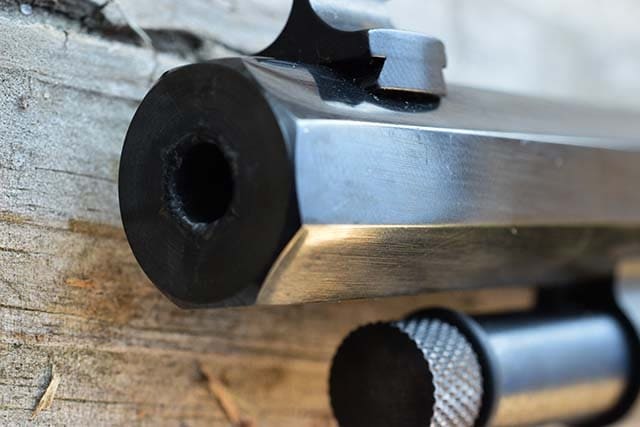 Three things will stand out against most of the magazine fed .22 LR rifles these days: one of them is great, the other isn’t, and one should appeal to traditionalists.

The great is the rifle’s action. Like ice sliding across a greased up piece of glass. It’s incredibly smooth and easy to work, feeling nicer than vintage Marlin 39’s.

The not-so-great is the tube loader. For .22-caliber rifles, tube loading is cumbersome and slow. If you’re wondering why there isn’t a loading gate it’s because Marlin discovered in the late 1800’s that a loading gate on a .22 rifle would often rip the bullets out of the casings. However, the original 1860 Henry Rifle was a tube loader, so I suppose they are following in those footsteps.

The aspect to be lauded by traditionalists is the lack of a manual button or sliding tang safety. Somehow the owners of Henry convinced their lawyers that the only safety a lever rifle needs is a person with common sense, an empty chamber and a half-cock notch. It’s a welcome change from most modern guns that include a myriad of features — often considered unnecessary — in the name of safety. 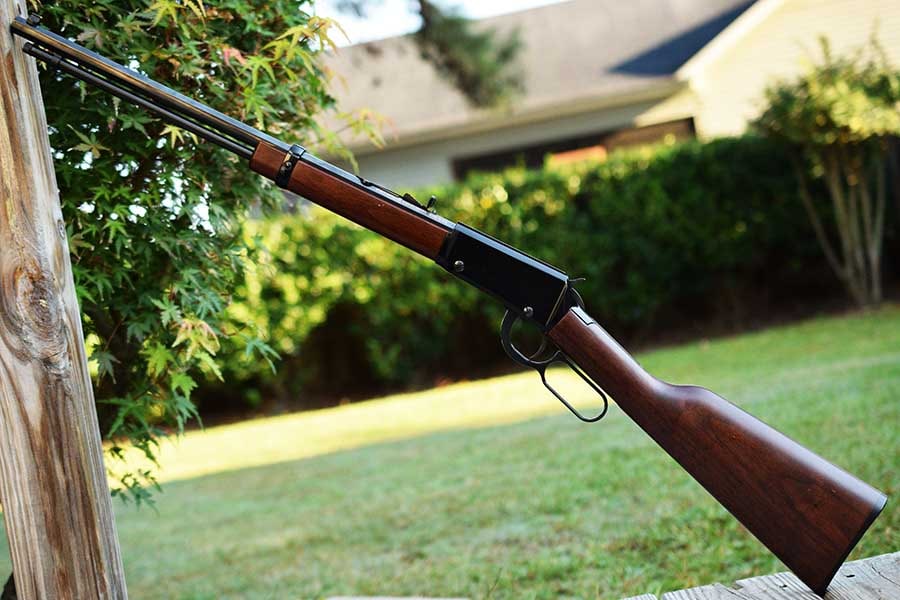 The Henry is one good-looking .22 rifle. (Photo: Jim Grant)

On the range, the Octagon Frontier might turn a few heads thanks to its styling when compared to most other .22 caliber rifles. It truly gives off the appearance of a classic, vintage piece compared to most small bore rifles today, but looks don’t mean anything if the rifle can’t shoot.

The Frontier Octagon shoots great, if you can master the sights. As I mentioned earlier, the traditional buckhorn sights are a little tough to use. It will take a bit of concentration to line up the notch, diamond, and the front sight to put your rounds on target. With Federal Auto-Match I was able to achieve 1-inch groups at 25 yards. Not bad considering how fine the sights are. Rock Island Armory plated hollow points didn’t perform quite as well, grouping 1.5 inches at 25 yards. Not bad considering the sights being used. The trigger, although a little heavy, has a fairly crisp break, much better than most lever rifle triggers I have tried. 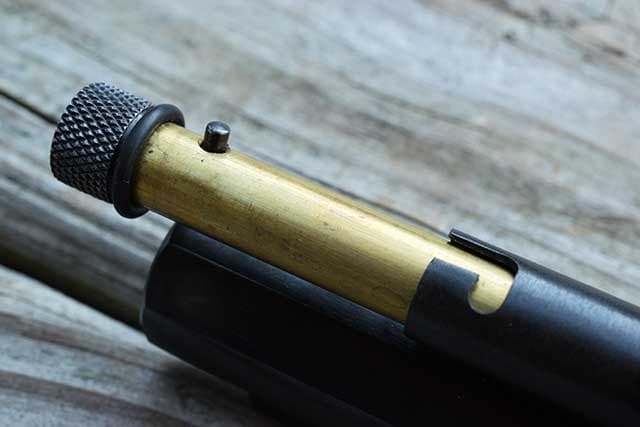 The Henry loads from a magazine tube that extracts from the muzzle end of the rifle (Photo: Jim Grant)

Instead of shooting paper, however, you’ll have the most fun and enjoyment shooting steel plates and tin cans at 25 and 50 yards.

Firing off one round after another, ringing steel over and over again is the raison d’etre of this rifle in my opinion. There is something so fun just working that action and it gives a greater enjoyment than a semi-auto or bolt action.

As Guns.com mentioned in the Henry Big Boy rifle review, you’ll shoot way too much ammo because you’ll have way too much fun to care. The Octagon Frontier is no different. You’ll quickly forget how many rounds you’re sending down range as you lose yourself in the moment ringing steel or destroying tin cans over and over again.

The Henry rifle is the perfect tool to bring new shooters into the fold, especially with its reasonable MSRP of $450. Hand them one of these rifles and they’ll keep asking you for more and more ammo.

For veteran shooters, this rifle is a great alternative to the often expensive vintage rimfire lever rifles made by Winchester and Marlin.

For those who love Westerns, this rifle transports you to the dusty trails and cattle towns of your favorite movie or tv show. You’ll feel like you’re standing alongside men like John Wayne, Clint Eastwood, Tom Mix, Gene Autry and Chuck Connors. Yes this rifle is just that fun. Lucas McCain would be proud.