Few guns through history carry the unsung significance of Benjamin Tyler Henry’s original .44 rimfire lever action repeater, the gun one could “load on Sunday and shoot all week long.” With less than 15,000 ever produced, and far fewer surviving today, reproductions are as close as most of us can come to firing this piece of American history.  Where better to start than with the company of the same name as they introduce their new-for-2018 Original Henry Rare Carbine?

The iconic Henry Original Rare Carbine lever action long gun draws on a 155-year history of form and function, but blends that with modern technology.  Naturally, The Henry .44 rimfire is long obsolete as a chambering, so the majority of reproductions, this one included, are chambered in .44-40 WCF.  The toggle link lever action is true to form, and like other Henry Repeating Arms rifles, has buttery smooth action.  The 20.5-inch heavy octagon barrel is a serious chunk of blued steel yet pales in comparison to the Original Rifle’s 24-inch barrel.  Still, the shorter Carbine length holds a full ten rounds in the magazine tube, which, for those unfamiliar with the old 1860 Henry, loads with a twist of the top of the magazine tube.  A folding ladder rear sight graduated to 800 yards completes the look, and mates up nicely with the blade front. 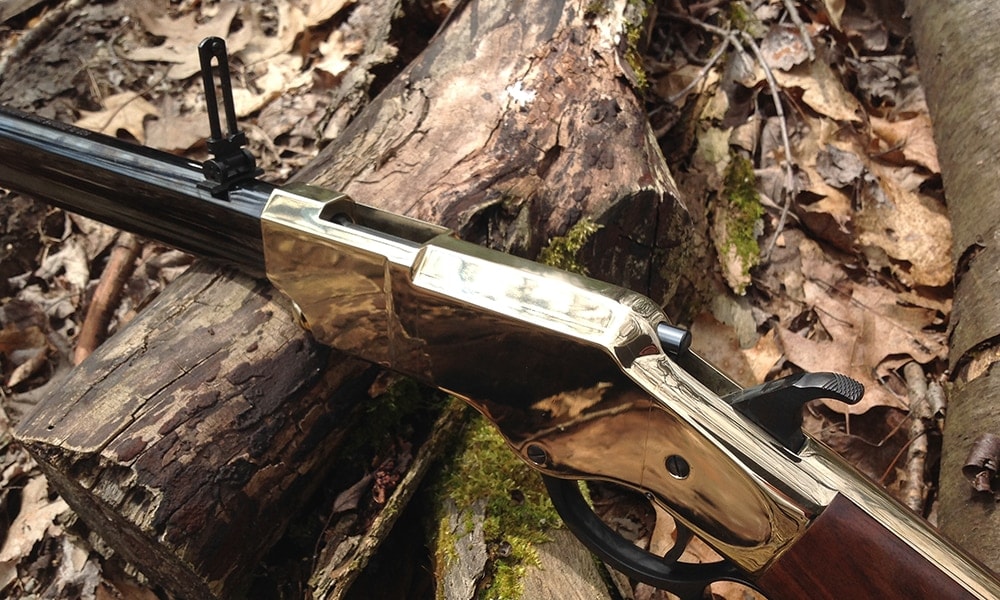 The folding ladder sight adds to both the historical and literal accuracy of the original design, while the half-cock safety is also true-to-form. (Photo: Kristin Alberts/Guns.com) 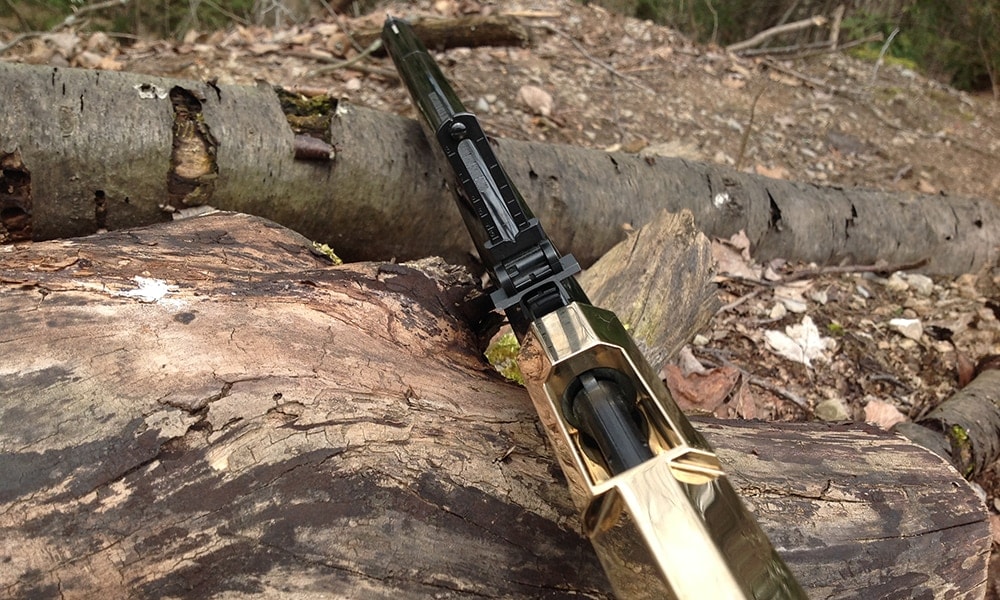 The polished brass receiver lends the gun its traditional looks, as does the historically accurate lack of a wood forend. While the brass is flashy, it’s important to note that it’s not merely a brass overlay or receiver cover. Henry Repeating Arms specially formulated a hardened brass process with the same tensile strength of steel, meaning shooters needn’t be concerned with the receiver stretch that has been rumored to plague other cheaper reproductions.

Improvements do not stop at the receiver, however, as our Rare Carbine includes some Fancy-grade American Walnut with exceptional figure.  At 39.5 inches overall length and 8.49 pounds, even the carbine-length is a handful of engineering.  Like every other piece that emerges from Henry Repeating Arms, the Original Carbine is 100 percent built on American soil of American components. Though the names are the same, Henry Repeating Arms claims no relationship to the late designer, yet they maintain a legacy he would no doubt embrace.  MSRP is tall at $2,415 but matches the scarcity of the gun on the market with its limited market aimed largely at collectors. Other variations previously debuted include the standard New Original Rifle, Iron Framed, Silver Deluxe Engraved, and Deluxe Engraved 2nd Edition.

The Henry Repeating Arms Rare Carbine is a looker to be sure, but make no mistake, it is a shooter as well.  The 1:36 inch twist barrel is more than capable of stabilizing modern ammo, and we challenged the gun with a variety of loads.  That opens the door for our test Henry as not only a range companion, action shooter, or dang pretty wall hanger, but better yet, as a hunting rifle and capable carbine that will patina beautifully over the years. 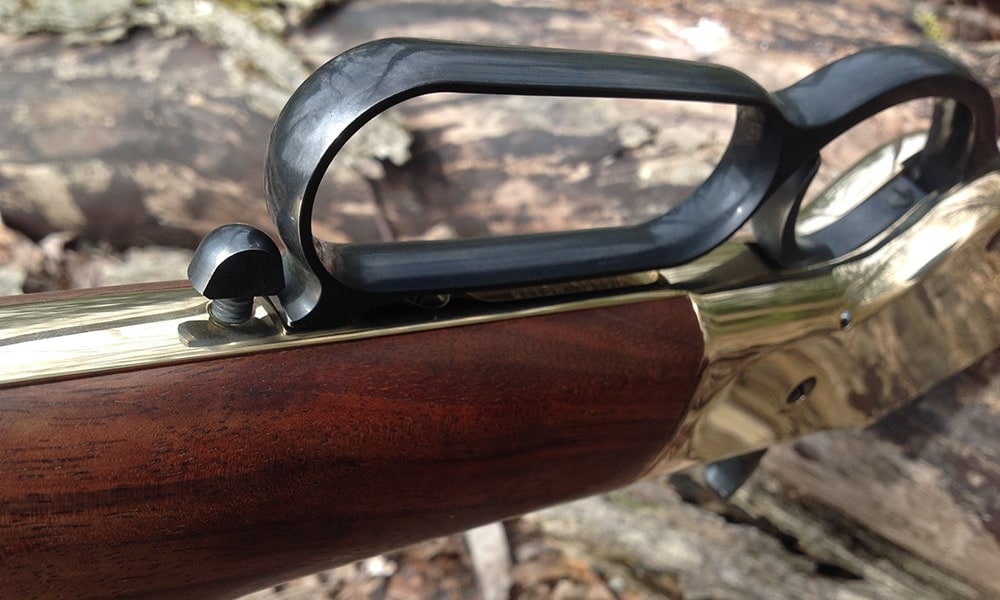 The lever action is silky smooth, and when not in action, the lever lock secures the action. (Photo: Kristin Alberts/Guns.com)

With .44-40 being an affordable and readily available western caliber, we were able to acquire and fire a wide array of factory and cowboy action-type ammunition: Hornady  205-grain Cowboy, Winchester Cowboy Action Flat Nose 225-grain, Winchester Power Point 200-grain, HSM 200-grain LRNFP, and Buffalo Cartridge Outlaw 200-grain LRNFP.  Though the gun is more capable than this shooter, as I familiarize myself to a ladder sight, the one thing I can say for certain is, the Rare Carbine performs up to its appearance. At 50 yards, the gun shoots right-on with the sight laying flat, and while we didn’t measure the groups as accuracy was not the main goal, five shot groups were easily around an inch to an inch-and-a-quarter.  At 100 yards, with the ladder sight adjusted, the Carbine punched out groups between 2 inches and 2.5  inches, limited no doubt by yours truly.  The bottom line is, the Henry Original Carbine is as enjoyable to fire as it is to behold. 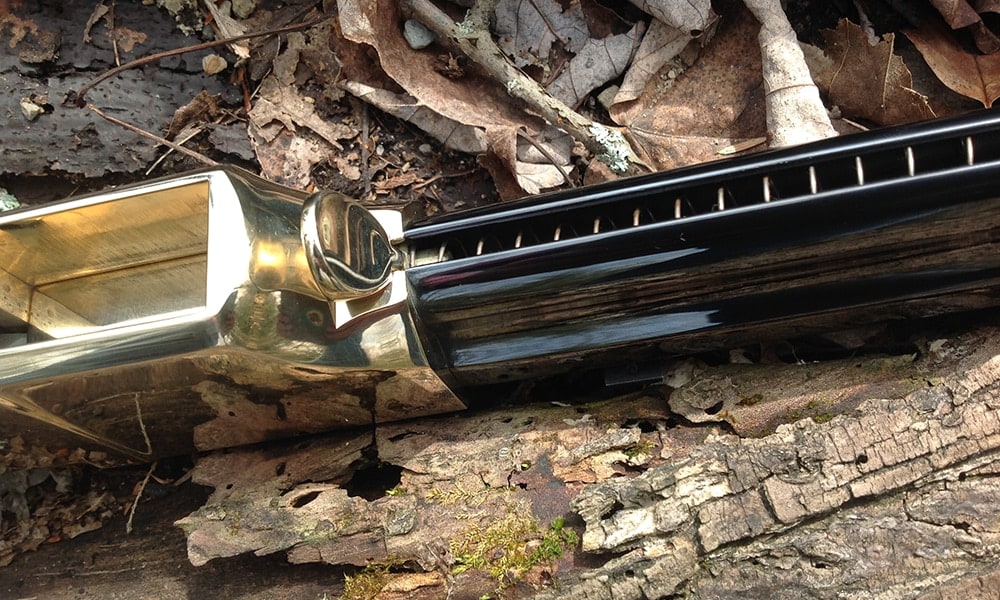 The brass magazine follower, shown here, is pushed forward toward the muzzle to load the Henry Original. (Photo: Kristin Alberts/Guns.com)

The fine Fancy grade American Walnut is truly drool-worthy.  The brass buttplate further accents the quality of the brass receiver.  One of the only knocks we can come up with on the build of the carbine– and it’s nitpicking to find any, really–is the rear ladder sight, which has a hint of side-to-side play. That said, the gun holds zero and shoots true to aim, firing with 100 percent reliability across all brands and types of ammunition.  The one-piece barrel and magazine tube are overbuilt and function as they should, though it naturally takes some time to become accustomed to using while keeping the lead hand out of the way of the traveling magazine follower. We were pleased to see that Henry opts to use the traditional half-cock safety, foregoing modern manual safeties.  As the gun ejects out the top, even lefties will gravitate to this beauty.

To fully appreciate the ingenuity of the Henry Patent Repeating Rifle of 1860, one must realize that soldiers and shooters of the day were firing two to three rounds per minute through their military-issue Springfield muzzleloaders.  Shooters champed at the bit to afford the new Henry repeater with its revolutionary action and firepower allowing practiced riflemen to fire upwards of 25 rounds per minute. Though the Henry design was fairly short-lived, being overtaken by the deeper pockets and ingenuity of Oliver Winchester, it is Benjamin Tyler Henry’s design that set the course for the lever action repeater to be recognized as America’s major offering to the history of firearms design. 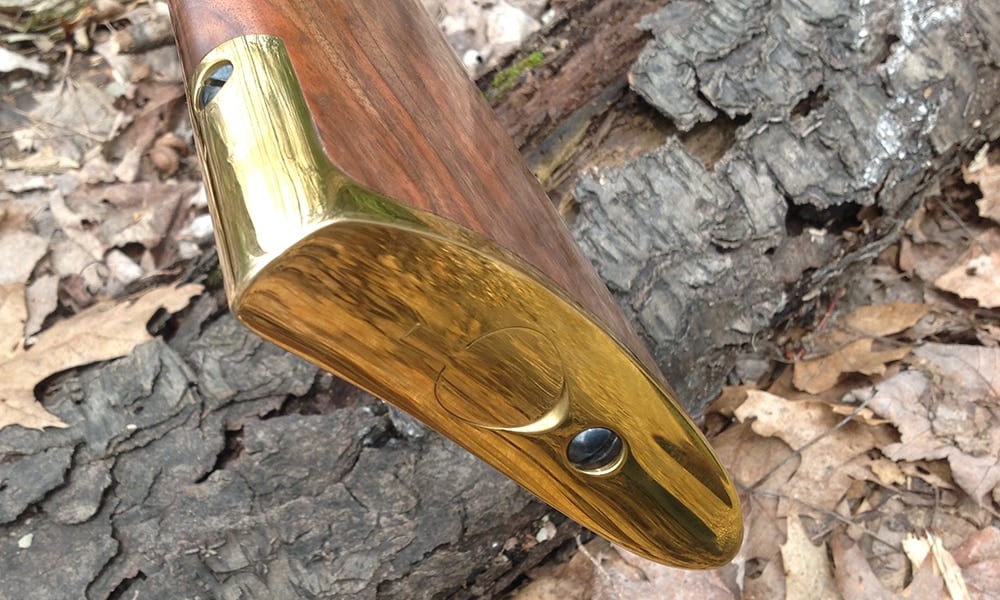 A brass buttplate with a functional trapdoor not only beautifies the rifle, but shows off the superior fit-and-finish of long gun. (Photo: Kristin Alberts/Guns.com)

Firing this new Henry Repeating Arms Rare Carbine, though far improved from the genuine original, one can’t help but bring to mind thoughts of bygone days, the depth of history—from the Civil War to the Indian Wars—with each smooth stroke of the lever and jump of the follower.  I’ve had the unique pleasure of handling not only the true Original 1860 Henry rifles, but also a number of variations produced by Henry Repeating Arms. I’m most impressed with the balance and handling of the slightly shorter and lighter Carbine we’ve covered here, whose weight completely negates the .44-40’s already minimal recoil and makes range time a slice of heaven.

With a tagline of “Invest in an American Legend,” and a market comprised largely of collectors and safe-fillers, one would think the Henry Repeating Arms Original Rare Carbine was built merely to admire.  And that it is, but after spending some quality time in its brassy presence, this gun shoots just as good as it looks.  From the range to the hunting woods, Henry Originals will get the job done and look damn good in the process.