Similar to how some people’s inner good and evil perpetually battle for control of their mind, my inner Eugene Stoner and Mikhail Kalashnikov wage war inside my gun safe. Each vying for dominance of both my bank account and safe space.

While I love the die-hard legendary reliability of Kalashnikov’s weapons, the ergonomics are just a step above actively combating my hands. On the other hand, the ergonomics and accuracy of Eugene Stoner’s AR-15 weapons are phenomenal, but reliability under adverse conditions could use some work. I’ve tried proprietary designs both foreign and domestic, but they either aren’t as user-friendly as an AR, or they’re way too expensive. That is, until Patriot Ordnance Factory released its new entry-level, piston AR, the P15 Puritan rifle, chambered in 5.56mm. 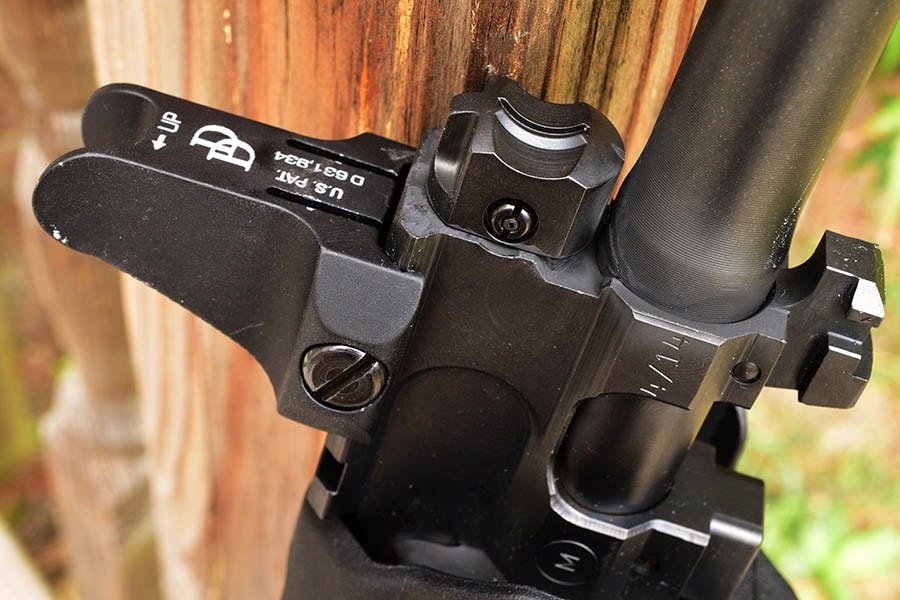 I know what you’re thinking, “A piston AR-15? What is it, 2005?” If ammo prices are any indication, it’s definitely not 2005, and yes I realize that piston-driven AR-15 rifles aren’t anything new. Yes, POF’s rifles are very nice, ultra-reliable weapons, but like I mentioned earlier they’re normally too expensive for new shooters to consider. The Puritan solves this by lowering the MSRP of the rifle to a more affordable $1,499.

While it isn’t cheap, per se, compared to other piston AR’s it’s actually pretty affordable. Though, if it’s still too much dough for you to cough up, POF also sells the complete upper for $899.

When paired with something like a stripped lower from Palmetto State Armory, could get shooters in the piston AR game for under $1,200. Which raises the question: With standard, direct impingement AR-15 rifles more affordable than ever, why would someone op to buy a piston-driven one? — An excellent question with multiple answers. 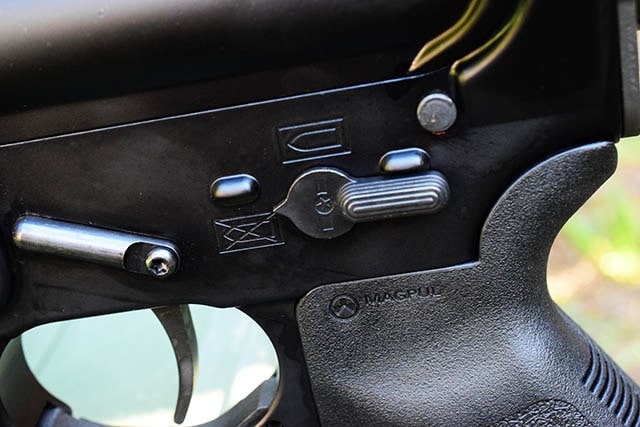 The primary reason most people go with a piston-driven rifle as opposed to one with direct impingement is reliability. When well-maintained, both systems are reliable enough that the majority of shooters will never encounter an issue with them. The problem is direct impingement tends to crap where it eats, so to speak, by venting excess gas and carbon directly into the receiver. On a regularly maintained weapon this isn’t a big deal and just means the weapon will require more aggressive cleaning later on. If you’re on your tenth magazine dump on a filthy DI weapon, you can all but expect issues, especially if the gun’s internals are worn out like on military weapons.

Piston systems avoid this by venting the excess carbon and hot gases through the handguards into the open air. This, combined with its self-regulating gas system and high internal clearances are what make the AKM so reliable. If you think that means the Puritan is an AK hidden inside of an AR-15, you’re way off the mark. If anything, it’s like an AR-180 or SKS inside an AR-15’s body. 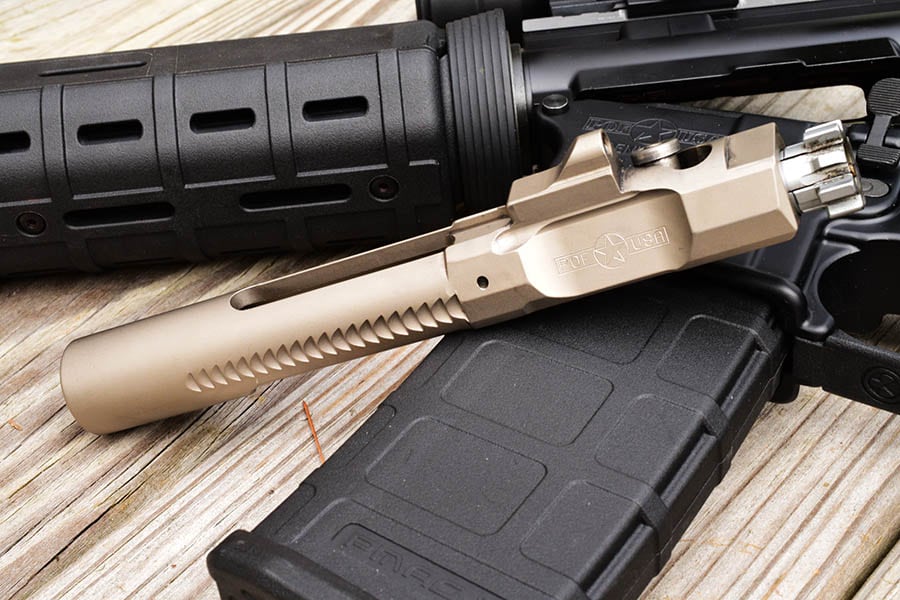 The Puritan’s Nickel-Boron bolt carrier is a dead giveaway that this isn’t a standard direct impingement weapon. (Photo: Jim Grant)

The Puritan uses a gas-driven, short-stroke piston system to divert excess gas to the bolt-carrier group to drive it rearward and chamber another round, and an AK rifle does this with a long-stroke piston system. The difference between the two has to do with the size and distance traveled by the gas piston. Shooters familiar with AK rifles have probably noticed that the bolt carrier group is pinned to the gas piston, like an M1 Garand, and is basically one big unit. While this is an extremely robust and reliable method of operation, the mass of the group moving rapidly wreaks havoc on accuracy by shaking the hell out of weapon. Short stroke pistons avoid this by separating the piston from the bolt and carrier, which leads to less reciprocating mass inside the receiver and thus superior accuracy. 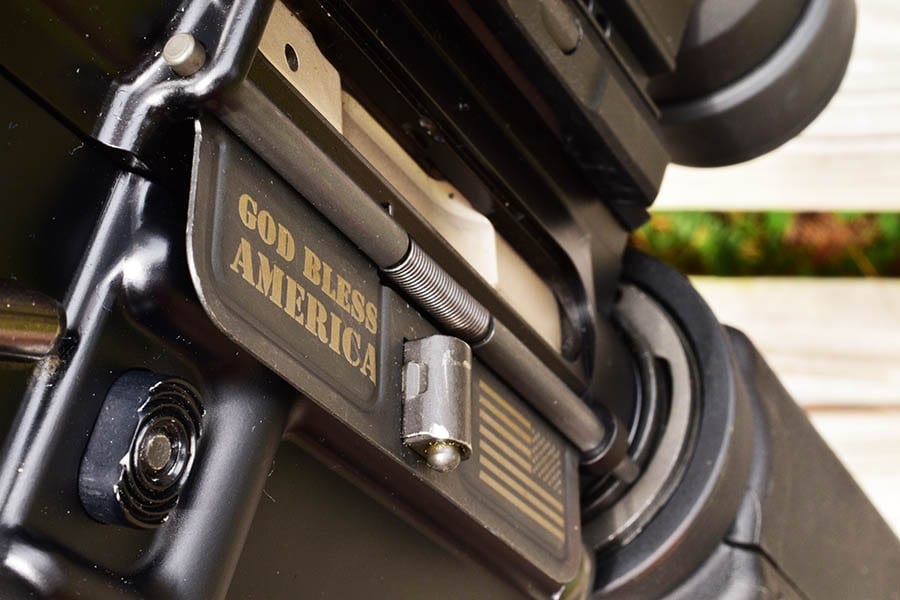 If you’re the sort of person who was offended with Trijicon’s bible verse references, POF might not be the best company for you. (Photo: Jim Grant)

Again, nothing new here, but POF has its own take on the system that separates them from competitors. Taking a play from both the Soviet military and Heckler & Koch, the Puritan’s chambered in semi-fluted (“Semi” because only the neck portion of the chamber is actually fluted, like an SVT-40). The reasoning for this being that it intentionally creates a looser seal between the chamber and shell casing to ensure more positive extraction.

This does have the downside of venting small amounts of carbon back into the receiver, but unlike the fully-fluted chambers of HK rifles, POF’s rifles simply mar, not destroy brass casings. Good news for reloaders.

It’s not just what’s under the hood on the Puritan that makes is such a great weapon, it also includes an array of desirable features. For instance, despite being POF’s economy model rifle, the rifle’s bolt carrier is Nickel Boron coated, which not only looks cool as hell, but also greatly extends its longevity and resistance to corrosion. 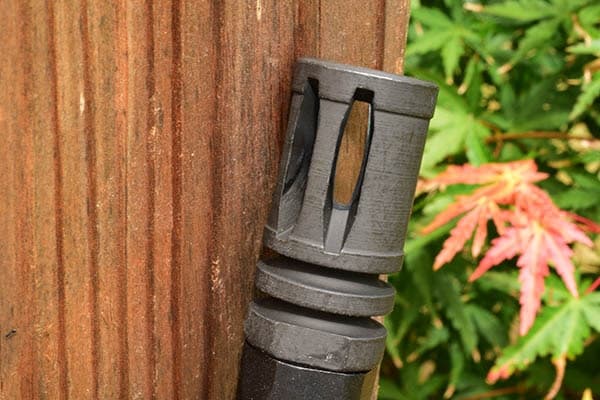 The Puritan ships with a standard A2 flash hider, whereas more expensive models from POF come with a three-port compensator. (Photo: Jim Grant)

The Puritan is finished in standard black anodization, with its contoured barrel nitrided. This barrel is 16.5 inches, includes an A2-style birdcage flash hider and has a twist rate of 1 in 8 inch twist for optimal stability across a wide spectrum of ammo weights. While many so-called experts parrot third-hand tropes of how inaccurate piston weapons are, POF isn’t listening. The company included a match-grade 4.5-pound trigger with KNS anti-walk pins to help shooters squeeze out every last inch of performance from the Puritan. Additionally, the weapon’s gas block has rails for a front iron sight, laser or tactical light and features a bayonet lug beneath it.

On the range, the Puritan performed awesome, experiencing no jams across 650 rounds of various ammunition types. Recoil is mild and the weapon handles quickly, weighing only 6.5 pounds. In terms of accuracy, it achieved inch and a half groups at 100 yards utilizing Hornady TAP ammo, sub 2-inch groups with Federal XM193 and th3ree-inch groups with Tula, steel-cased 55 grain ammo. The rifle was shot from a bench for accuracy testing with a Meopta ZD 1-4×22 RD magnified optical sight. 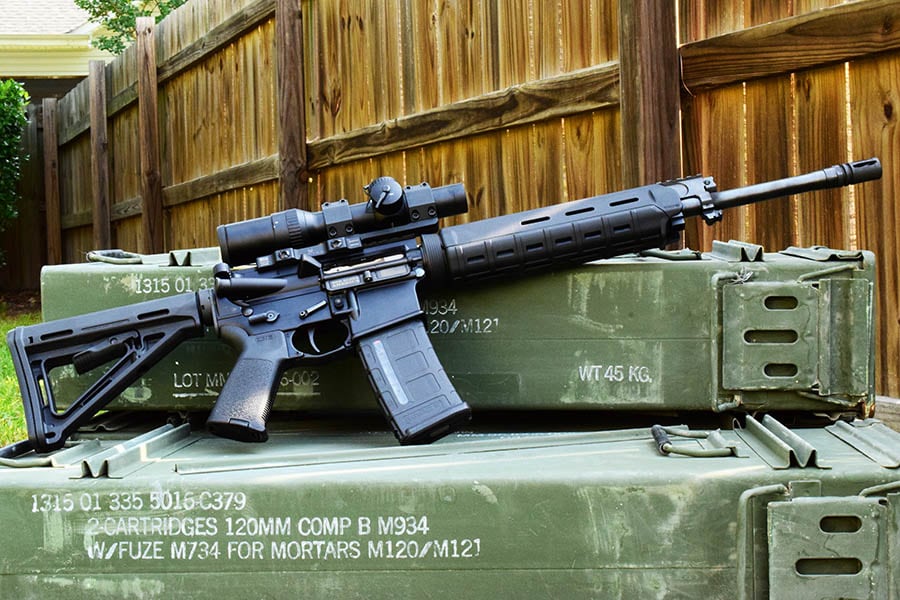 If you’re wondering how POF can offer this weapon for hundreds less than than standard rifles, while still including many of the nicest features, shift your eyes to the furniture. Unlike POF’s core lineup of piston-driven AR-15 rifles, the Puritan ships with Magpul MOE furniture instead of their proprietary integral railed handguard. Also, the Puritan’s barrel isn’t match-grade or fluted and doesn’t include its three-port muzzle brake.

With an MSRP of $1,499, the rifle still isn’t cheap, but you get a lot of value for your money, with many superfluous extras removed to cut cost. If these features are worth an additional $900 to you, then I would advise buying POF’s P415 model for $2,400. If not, the Puritan offers shooters a quality, more affordable way to get their hands on one of the best piston rifle platforms on the market. It may not be for everyone, and many people will never need the added reliability it offers, but who has ever said they wished their rifle wasn’t so damned reliable?