One of my favorite things about working in the firearms industry is watching all of the aftermarket products follow in the wake of a popular gun.  But sometimes the wait can be frustrating and long, especially when you’re hoping for an accessory, like a holster, that will make a gun instantly usable.

That’s exactly what I found with the Springfield Armory XDS — the most anticipated compact carry pistol of 2012 (if you don’t count the Heizer Double-Tap).

The XDS is an amazing weapon.  It is built exceptionally well.  The gun is reasonably small, reliably accurate, and a .45 ACP.  But what about a holster?

Like many pistols from Springfield Armory, the gun comes with a holster, but I’ve never like them all that much.  They seem like decent entry level holsters for competition, or a day at the range, but they’re not designed for concealed carry.  That’s fine.  But I don’t feel like I can really evaluate a pistol, especially one that I’m going to endorse for concealed carry, until I’ve carried it a while. 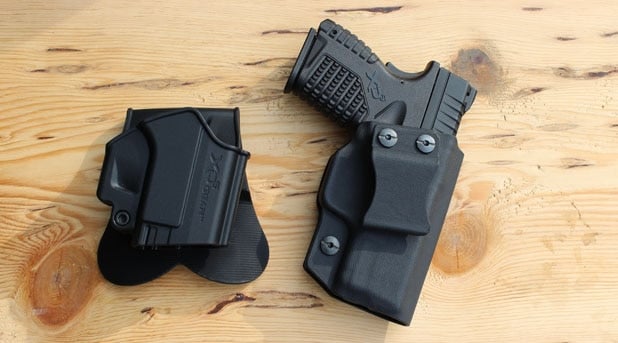 So I always turn to the Internet.  This is where cottage industry really shines.  And in this political season, when we’re spending so much of our time debating small business creation and support, I would like to highlight a small business — and suggest that this is the best way to holster a weapon, especially a new one.

Tony Catner is Multi Holsters.  He makes a wide variety of holster styles.  He was generous enough to send a couple of holsters for the XDS.  And they are both perfect.

The Multi Holster (this time the name of the holster, not the company) is like an adjustable paddle style.  The belt loops can be affixed in different positions to facilitate either high or low placement.  His in-the-waist-band model is more traditional. 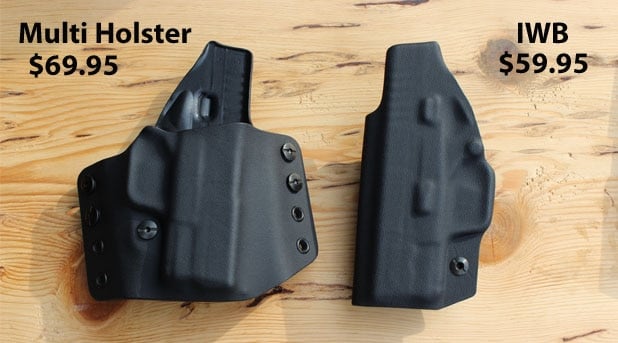 Catner is a builder/contractor by day.  And, like many of us, he’s got a second gig.  He was one of the first to have holsters for the XDS available, and still makes some of the best holsters available.  This is where cottage industry comes into its own.  There is very little “tooling up” for production.  As soon as the XDS was available, Catner bought one to use a mold.

After selling a few holsters, and taking more orders, Catner discovered he needed another XDS, so he bought a second.  After few weeks, the Blueguns were available.  These models are often used as training tools, but are exact enough that they’re the preferred mold for most holster makers.

But Catner doesn’t stop with the Blueguns molds (he now has two of those, too).  He finishes each holster fitting on an actual XDS.  The result is a really incredible fit.  A secure fit.  The gun won’t budge.  Yet it draws flawlessly.  It seems impossible.

Kydex is a nice material.  There is very little elasticity in the plastic, and a good snug fit will create a holster that is secure, reliable, without the extra straps that can stand in the way of a rapid draw.  And while I still prefer the feel and smell of leather, I carry in Kydex. 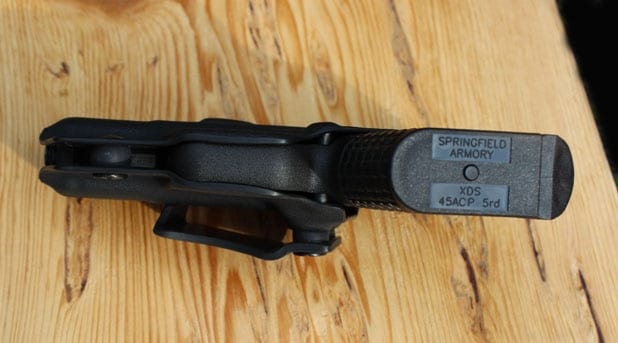 And how’s business? “About 35 to 40 percent of my orders are for the XDS,” Catner said. “Sales have been incredible, as it appears there are not that many holster makers that geared up as quickly.  An hour after I got home with the gun I had a completed holster made and I was uploading the video to YouTube. I cannot wait until some of the laser makers come out with lasers for it.  I will jump on that as quickly as possible and hope to be the first again on YouTube with that.”

Seems like a decent strategy.  And working with someone like Catner puts a face and a reputation to a name.  For example, I asked why he used a screwed on belt loop instead of a bent fold of Kydex, like some other makers.

“The problem with the fold over clip, as I found out soon into my Kydex career, was that it is obviously only as thick as the materials you are using. Now I use 0.08 for a majority of my holsters, which is thicker than most out there. I found that over time the bend at the clip would develop a stress crack and soon come off. This is something I had to learn the hard way.  I recalled all those holsters I had made and had to come up with a different plan.”

I like that.  It speaks to a pride in one’s profession that we don’t see much anymore.

“I tend to over build things and made the clips out of 0.125,” Catner said. “To date I have never had one person say the clip has broken. The design that I currently have has a way to tighten and loosen the clip according to one’s desire.  This also allows me to make a run of holster blanks and then affix what ever size belt clip is desired. In the past couple of weeks I have seen a few other YouTube videos from other guys making and selling Kydex holsters that mimic my design exactly.  At first I was offended, but I have come to realize that it is more of a compliment since my design works.”

And his design does work.  While I respect the adjustable Multi Holster model, I prefer the IWB.  It is the type of holster you can trust, implicitly.  I can’t ask for much more than that.

Oh, and he’s also left handed — for you south paws out there forever searching for someone who understands your plight.