A bayonet on your home defense gun? Why not 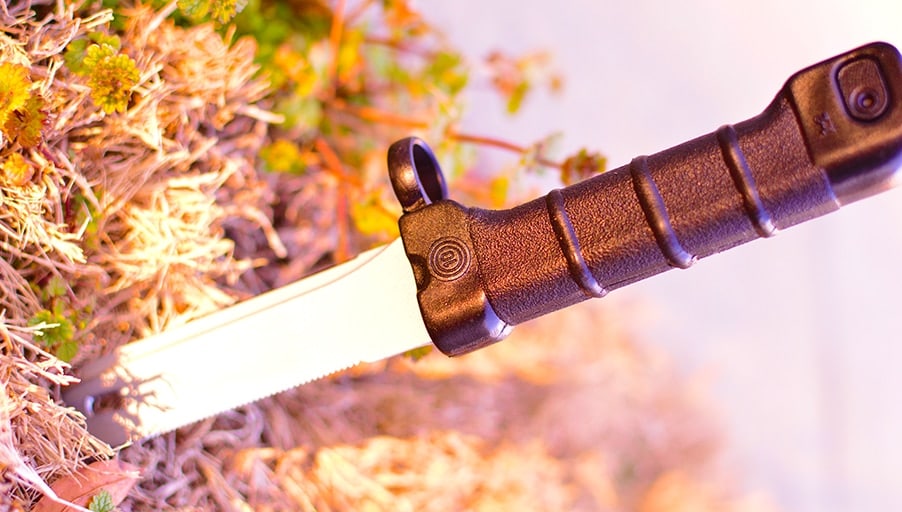 You know what my gun needs? A knife. (Photo by Jim Grant)

In recent years, people who traditionally lean an old pump-action shotgun in the corner of their bedroom or have a bed-side revolver for self-defense have migrated to semi-auto rifles, specifically AR-15s chambered in 5.56x45mm. While older shooters balk at the thought of using a rifle round indoors to defend their home, terminal-ballistic-minded shooters have begun to realize that 55 grain .223 over penetrates less than 00 buck shot and 9x19mm Luger. The biggest downside is noise. An AR-15 fired indoors without a sound suppressor will do serious permanent damage to your hearing.

A buddy of mine stopped by the other day and we started mulling over the use of an AR-15 for home defense. We both agreed that between rifles, shotguns and handguns, tactically, it’s the best choice. A pump-action has limited ammo reserves and a handgun is more difficult to aim. The one area that a pistol excels at is for shooters who intend to “clear” their homes. Having a second hand to manipulate doors and lights is, obviously, very useful. Let me make it clear that I am not advocating that you clear your home, unless it is absolutely necessary. There is a reason SWAT teams are teams, not individuals.

During the course of our conversation, a trailer for “300: Rise of an Empire” came on screen and we started talking about the Battle of Thermopylae. The Spartans of antiquity might not have had glistening steroid-fueled bodies or slow-mo evisceration, but they did have a classic military strategy on their side, a choke point.

That steered the discussion towards Greek and Roman military tactics, polearms and the evolution of men with pointy objects on the end of sticks. Modern armed men have pointy sticks that fire hot lead as well, but still the pointed end remains. Why is that? We reasoned that aside from machismo and an aggressive conditioning, was to physically dissuade enemy combatants from grabbing the weapon. After all, one of the advanced principles of armed self-defense is weapon retention and who would willingly grab a sharp object?

Military historians will tell you the biggest advantage of a pike or spear is range. They will also tell you that getting flanked, in most cases, means death. However, using Spartan tactics and forcing your opponent into a narrow death-funnel negates their ability to flank. Mounting a bayonet on your rifle and defending your bedroom, depending on the size of the frame, gives you the same Spartan advantage on a much smaller scale.

Sadly, there are some downsides to having a bayonet mounted on your rifle, such as worse maneuverability and decreased accuracy. Upon further evaluation, none of these issues apply to a home-owner who intends to defend a fixed position. If you’re not going to leave the bedroom, maneuverability won’t be a problem. Additionally, since most homes are not 100 yards long, the shift in point of impact wouldn’t significantly affect practical accuracy. 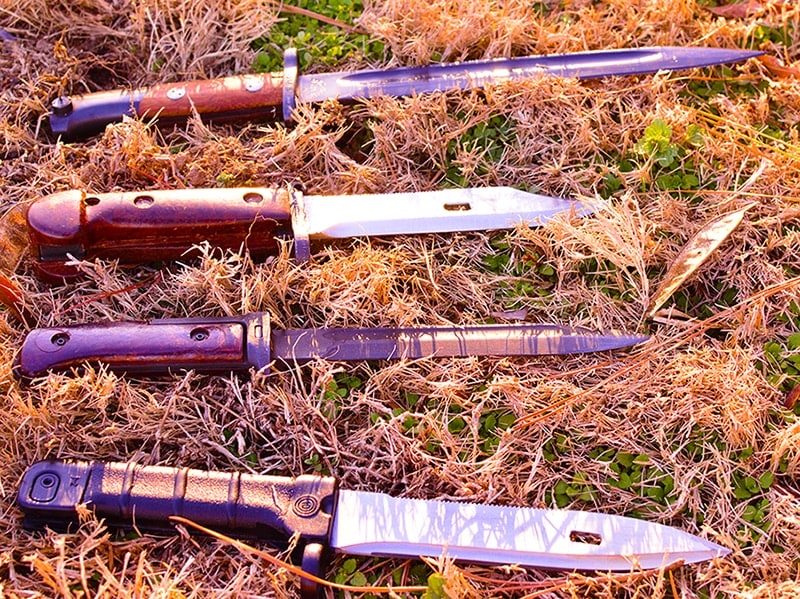 Bayonets for everyone! (Photo by Jim Grant)

Why don’t more people mount bayonets on their home defense rifles? Think about it.

You’re by your bed-side. Your wife is frantically dialing 911 as a crazed junky slams through your front door. You raise your rifle, resting your sights on the bedroom door waiting for all hell to break loose. The man’s boot crashes through your door harder than a lead-footed great grandma’s Buick through a farmer’s market. Startled with your finger off the trigger, you accidentally eject the full magazine. A few feet away charging headlong into you and your wife, your assailant closes the gap and is met with your one and only loaded round. Adrenaline makes your arms feel like the San Andreas fault and the violent shaking causes you to pull the shot wide, striking the man’s shoulder to seemingly no effect. With the home invader a scant 2 feet away, your heart beating faster than a Skrillex track, do you want a metal stick or a metal stick with a bayonet on the end?

I’ll play devil’s advocate, if a bullet didn’t stop him, what good is a bayonet? They have a much smaller chance of incapacitating a target instantly. While this is true, your gun-mounted bayonet has the advantage of increasing the distance between you and Stabby the crack-head. At least if you plunge your bayonet into the attacker, any rifle grappling will shorten his miserable time on Earth.

I know this is a grisly topic and there are a multitude of scenarios that could occur. To put it bluntly, defense-minded gun owners are people who decided they didn’t like the odds of being attacked while they were unarmed. Therefore, they bought a firearm as protection and insurance. Think of a bayonet as an extended warranty for your insurance. You hope you will never have to use it, but if you end up needing it, you are prepared.

What do you think, am I being paranoid? Or is adding a bayonet just too much for a home defense gun? Maybe I’m a modern-day Sun Tzu or Don Quixote.