During our exploration of Charleston, South Carolina, we took a side trip to Columbia, which is about a hundred miles northwest (right in the middle of the state), to visit a little company called Innovative Arms. And what’s so special about Innovative Arms? Well, they specialize in making suppressors (or silencers) and they agreed to give Guns.com a little insight into this growing niche market within the gun world.

Inside the workshop, owner Phillip Woodell explained, “It’s more about tone than anything,” as he held up one of his finished products for me to see. “The noise might be a little softer, but if it isn’t the right tone than it just isn’t going to work.”

A gunshot is a loud and specific sound and a suppressed gunshot can either blend in with surrounding noise and go unnoticed, or it can just sound like a quieter gunshot. The goal is create a sound that is comfortable. Kind of like what a muffler does for a car.

“It doesn’t reduce noise completely, but you won’t need ear plugs when you shoot (most cartridges),” Woodell said and then disassembled one of the canisters to show us how it works. 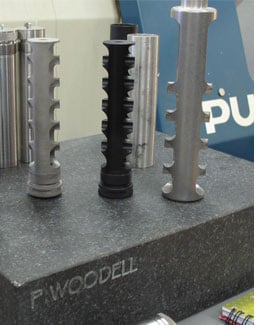 A sideview of the internal components of a silencer. (Photo: Daniel Terril)

Although a suppressor does a very complicated thing like control sound, to my surprise, it’s actually a very simple device. It has two main components. The first is a cylinder shaped piece of metal (usually steel or aluminum) with a specific pattern cut into it and a hole drilled through the center (to match the bore). That cylinder fits inside the second main component: the can. And that’s it. It has a threaded end that fits on the muzzle and the business end is encased.

“Every design is different. Every company has a different pattern and shape that creates a different tone,” he said and added, “It took me about two years to figure out that design. Two years of trial and error.” (Woodell asked that we didn’t show his pattern because it’s proprietary information).

What I can reveal, without giving too much away, is the pattern looks like a series of figure eights – a shape that forces gas to travel in a circular motion. Suppressors are designed to trap the hot propellant gases, which is what makes noise, and delay their escape. When the gas finally does escape it’s much cooler in turn it makes less noise.

Depending on the caliber and configuration, a suppressor can reduce the sound to just the action. For instance, a .22-caliber bolt-action rifle with an integral suppressor will make virtually no noise because it’s a single unit with few moving parts and the caliber requires a very small combustion.

However, a semi-auto .22 with an attached suppressor will make some noise because there’s more moving parts.

And larger calibers like 9mm with a higher cyclic rate like on an Uzi will make even more noise.

But an Uzi has an open bolt design, so every time you pull the trigger the clunky metal bolt pushes forward and then backward, so it feels like you’re shooting two rounds instead of one.

To recap, the larger the caliber, the more moving parts there are, and the faster the gun shoots, the louder the gun will be (makes sense, right? RIGHT?)

Woodell explained that there are some tricks to making a suppressed weapon even quieter even if it’s a larger caliber. For instance, if one pours a little bit of water into the suppressor and then attaches it to the gun, when he or she shoots the heat from the blast will evaporate the water and since steam has a higher density than the gas, it’ll slow and cool the gas more efficiently. However, this trick is not compatible with all cartridges.

Also, if a gun is loaded up with subsonic rounds, meaning slower than the speed of sound, it will make even less noise because they’re designed to travel at a lower velocity. Less gas, less speed, less noise. But Mr. Woodell will explain that in greater detail:

However, the water trick does work with standard 9mm ammo, too.

When asked what are the practical reasons for owning a suppressor, Woodell answered with a series of anecdotes about people shooting varmints in their backyards or just plinking. But he also said it would be great for troops. If they did get into a gunfight while overseas – where they wouldn’t be wearing hearing protection – it could help reduce hearing damage.

But based on what we saw out at Boggy Head Rifle Range in Charleston, a lot of people just buy them for fun and noise reduction.

Woodell also made a point to mention that he would not recommend a silencer for self-defense. “Even if you’re in a situation where you’re in the right, it’s still going to look bad because silencers have gotten bad rap. You’ll probably have to pay a lot of court fees just to defend yourself,” he said and then added with a disappointing sigh, “People think they’re assassins’ tools.”

Suppressors are actually legal in most states, but they’re regulated. To own one, the purchaser has to register it and also pay a $200-tax stamp per suppressor.

If for those interested in getting a suppressor, realistically it isn’t outrageous especially for avid shooters. Woodell said a suppressor for a .22-caliber rifle is ideal. It costs $299 plus the $200 tax stamp.

And in all honesty, a nice .22-caliber rifle, a box full of cheap ammo, and a suppressor makes for a fun day.