In the past 20 years or so there has been a lot of ups and down for Ithaca Gun Company, a classic American manufacturer.  Hard times, quality control issues and a hand full of changes in ownership have plagued Ithaca, but the current owners have rebuilt the company from the ground up and moved to a new location in Upper Sandusky, Ohio.  The designs, especially the classic Model 37 shotgun, are still there but are being made with modern production methods and materials.

The new M37 Defense I was sent for review is in 12 gauge with a 3-inch chamber, eight-round magazine, 20 inch barrel and an adjustable AR-style stock.  It is a nice blend of the original M37 design with modern furniture.

For those not already familiar with the Ithaca Model 37 let’s take a look at where it came from.  In the early 1930s Ithaca was looking to get into the pump shotgun market.  They were already known for their quality double guns but the pump action had started to take a bigger and bigger piece of the sporting shotgun market.  Instead of designing their own they waited for some patents to expire on the Remington Model 17 (introduced in 1917) and improve upon it.  It was a wise choice.  John Browning and John Pedersen were responsible for the original design.  It is a solid and dependable action and is well suited for the field and the battlefield. 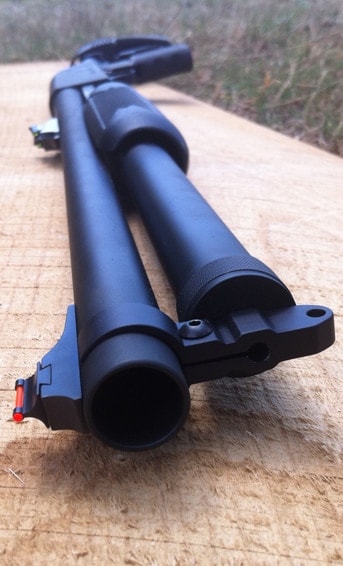 The Ithaca M37 is like most pump shotguns in its function.  Shells are held in a tubular magazine under the barrel and the action is “pumped” to eject a spent shell and load a new one.  This design is typically more reliable than semi-automatics especially when used in adverse conditions where there is a potential for mud, dirt and sand finding its way into the action.  This is where the Ithaca M37 has an even greater advantage over other pump shotguns.

The vast majority of pump action firearms, and semi-automatics too, eject spent shells from the side of the receiver.  The Ithaca M37 does not.  It ejects and loads from the bottom.

This simple difference is what makes this shotgun one of the best combat and defense shotgun designs.  Mud and crud are less likely to get into the bottom of the receiver and if they do find their way in gravity (it’s a downer) is going to help clear out the mess.

This is also great for left handed shooters, no spent shells flying across your face.

The M37 design has proven itself on the battlefield from WWII through Vietnam and in the hands and on the streets with multiple police departments across the U.S.  It is a rugged and reliable design that is also well suited for home defense.

Today’s Ithaca makes the M37 in a variant specifically tailored for home defense. The MSRP starts around $600. They come with either wood or synthetic stocks, 18.5- or 20-inch barrels and five or eight shot capacity. The base model sports a plane matte blued finish and a brass bead front sight.  The receiver is also taped for installing optics.

(A note on pricing: My Internet searching has not come up with too many places selling these to help find an actual street price.  The ones I have found are right at the same price as on Ithaca’s site.  No one local has them either.)

Ithaca sent me a dressed up version of their M37 for review with an MSRP is $670. It has a 20 inch barrel with an eight-round magazine.  It also sports an AR style adjustable stock with a pistol grip and fiber optic sights.  The receiver is machined from a sold block of steel and you can tell by the heft.  This is a beast of a 12 gauge.

The Defense 37 preformed well and functioned flawlessly at the range.  The recoil from heavy 3-inch shells was pretty mild for a pump action thanks to the buffer in the fancy tactical stock.  Don’t get me wrong: this is still a 12 gauge and you will know it if you squeeze the trigger and don’t have it pulled up tight in your shoulder.

I attempted to get the shotgun to slam fire (when you hold the trigger down it fires as soon as you chamber a new round) because older ones, mostly military or law enforcement issue, will do it.  This one would not. 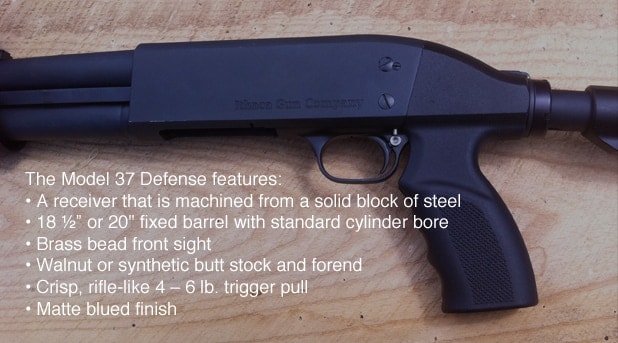 I fired a variety of shells from birdshot to slugs and 00 buck it ate them all.  The spread of the 00 buck was fairly wide at 30 to 40 feet, but still Ok for home defense, where that would be the extent of your range.  I was able to hit the ten-ring with a slug from that distance (Of course if I hadn’t been able to I would have been concerned about my shooting, or if I was going to have heat stroke).

As for the sights, I don’t care for the rear sights.  I have never understood why a shotgun made for home defense needs a rear sight.  A nice low light visible front bead is all you need.  If the need ever arises to use a shotgun to defend yourself and family in your home it is going to be close quarters and the rear sight is not needed and can be a distraction at a time when you need as few of them as possible.  The sight is removable however and is an option that was on the review model.

But since it does have a nice rear sight it has a lot of potential beyond a defense shotgun. However, it would have been even more advantageous if it has a removable choke; for a strictly defense gun this isn’t really an issue, but for $600 plus I would really like to have a barrel threaded for removable chokes.  This shotgun would make a nice turkey hunter, but not without putting on an extra full choke.

The Ithaca M37 Defense is a well-made and dependable design. There are other options in the defense shotgun category that have a few more options, lower price and a larger selection of aftermarket accessories.  There is a version of the Remington 870 that is very close to this.  It has a removable choke and cost about $150 less. But it ejects from the side, not the bottom.

If you are in the market for a “new” home defense shotgun you couldn’t go wrong with one of the new Ithaca’s.  They are of high quality and made on a tried and trusted design here in the U.S. of A.