Gun Review: J.C. Higgins .22 rifles are perfect for passing on to your kids

As a recent father, I wanted an old .22 rifle to restore and share with my son someday. Luckily, during a recent trip to the gun store I happened upon one, a J.C. Higgins 10316, with a hundred-dollar asking price. The Higgins is a magazine fed, bolt-action rifle. It had a little rust starting on the barrel and a lot of gunk and grim inside, but otherwise it was in fair condition.  And at $100, it turned out to be quite a bargain.

The J.C. Higgins 10316 rifle is identical to the Marlin Model 80. This particular model sold for $45. (Photo credit: Gun Auction)

J.C .Higgins is a company that produced sporting goods for Sears many years ago.  This particular model has the inscription “Sears, Roebuck & Company S, L, LR”. The latter means that it fires .22 short, long and long rifle cartridges, which is nice even though short and long are relatively hard to find.  Further research shows that it’s a copy of the Marlin Model 80. It wasn’t uncommon for big box retailers to contract gun makers to produce store-brand guns. 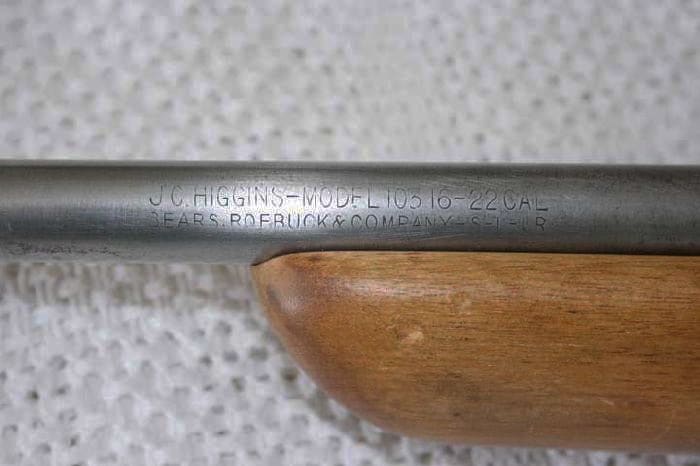 Patients not being a virtue I was blessed with, I decided to take the rifle out to the range the same day I bought it — before cleaning it! The magazine loaded with ease, holding seven rounds.  While shooting at a 25-yard target, the oversized iron sights seemed somewhat awkward, but after a few shots I got on target, driving round after round into the 10-ring. I put about 150 rounds down range and at 25 yards the groupings were great, even on windy, rainy day.

The rifle cycled smoothly, however, spent casings failed to eject properly — one out of every five did correctly.  Casings got stuck in the extractor. I tried cycling the bolt faster but that didn’t improve the situation. I figured the problem was probably due to all the gunk and build up inside the rifle, but I was wrong.

Upon closer inspection I found that the ejector spring was not positioned correctly.  I used a thick flat head screwdriver to push the spring back to its proper position.  Sure enough, the problem was solved.

Later I sat down to clean it. Like with a lot of rifle designs, the bolt removed by simply pulling back on it and depressing the trigger.  I disassembled the smaller components and scrubbed them with a wire brush and then I took apart the bolt to clean it. I’ve taken apart the bolt of my Mosin Nagant rifle nearly a thousand times, so I figured the process would be similar, but I was wrong.  The Higgings’ bolt was a nightmare to put back together.  After a few laborious hours and some extensive Internet research, I figured out what I was doing.  If you pick up one of these old shooters, take my advice: Gun Scrubber will work fine for the bolt. 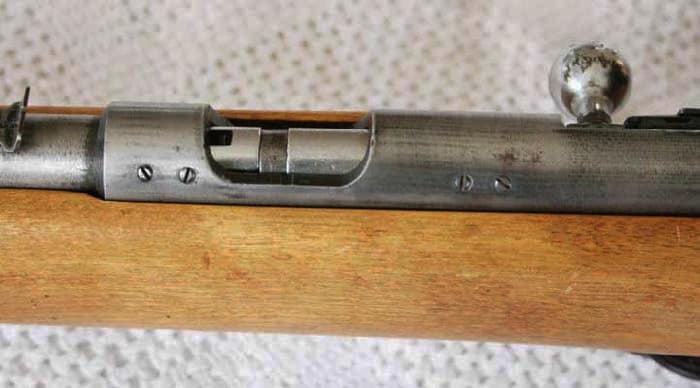 The bolt can be challenging to put back together. (Photo credit: Gun Auction)

For $100, the Higgins is an excellent shooter and a great future teaching instrument, but old rifles tend to have some problems, even they’re minor. I’ve identified three issues with this rifle, which may or may not be due to it just being old.

The primary issue is that the rear sight is loose. You can adjust elevation with a stair-stepped piece of metal, and you can push the rear sight to the left or right for windage.  But the movement from left to right is far too easy.  In fact, if you bump the sight at all it will move. It happens even if I tighten the screw all the way and beyond.  It’s a relatively minor problem though, but it’s still annoying and could prove problematic if I were hunting small game. 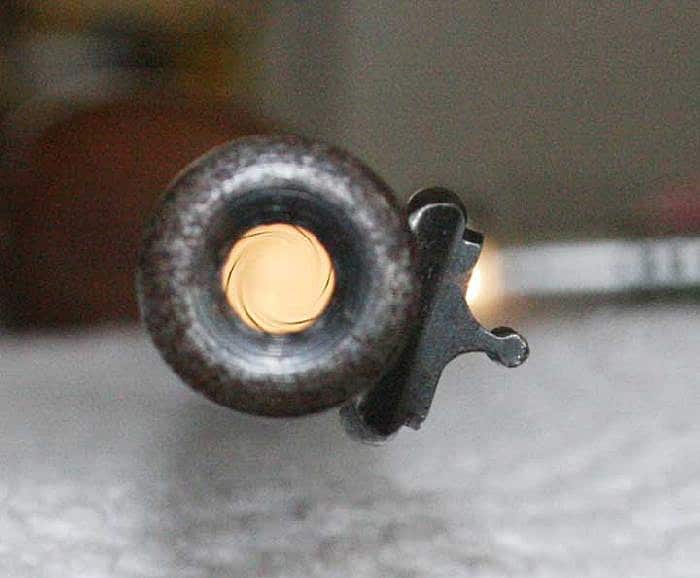 If you see light coming out of the muzzle, DUCK! (Photo credit: Gun Auction)

Another issue is that the magazine tends to stick in the mag-well. I lubricated the catch but that didn’t seem to help.  Again this is a minor issue, but on the bright side there’s no need to speed reload a plinker like this anyway.

Lastly, the trigger guard is made of plastic.  If it breaks I am up a creek because I won’t be able to find a replacement — not easily at least.

Overall this is a fantastic rifle for the price and for the history that comes along with it. While it isn’t a classic rifle in the traditional sense, it does come from a generation of quality craftsmanship.  I look forward to enjoying this rifle with my son someday and hopefully he can pass it on to his son.