Glenfield was a house brand used by the famed mail-order retailer JC Penny, and like many retailers of that time the store brand was just a front for the numerous companies contracted to manufacture the products – companies like Marlin, High Standard and Savage.

Today classic, middle of last century, store brand guns are often times a cheaper alternative to getting a brand new gun of the same design.

Guns.com has selected three Glenfield branded rifles that are all great shooters, a lot of fun to shoot and were all made by Marlin.

JC Penny called it the Glenfield 60.  This semi-automatic 22 was made by Marlin and sold by them as the Model 60 as well.

The Marlin 60, or Marlin’s design at least, is touted as “the most popular .22 in the world”. In fact, they’ve sold so many that Marlin says that the Model 60 has outsold the Ruger 10/22 by more than double, or more than 11 million since 1960 – the year Marlin introduced it.

Before gun laws changed in the 1980s, the Glenfield and Marlin 60s held 18 rounds in a tubular magazine under the barrel.  The ones currently made hold 15. The older ones also have a 22-inch barrel while the new ones sport a 19 incher.  They both had Marlin’s famous Micro-Groove rifling.

The Marlin 336 is a great choice if you are looking for a lever gun and JC Penny once offered one branded as the Glenfield Model 30. The Glenfields show up from time to time at gun shows and such. The informed buyer can sometimes get a deal on one of these knowing it’s really a Marlin 336, so now you know too.

To my knowable the Glenfields were only offered in 30-30 Winchester and .35 Remington.  Both of which are great hunting rounds. There were a handful of models offered, some with four-, five- or six-round tubular magazines.

If you’re in the market for a 336, or a lever action, just keep your eyes peeled for the Glenfield 30.

The Marlin made Glenfield Model 20 is another .22 rifle, but this time around a bolt action. 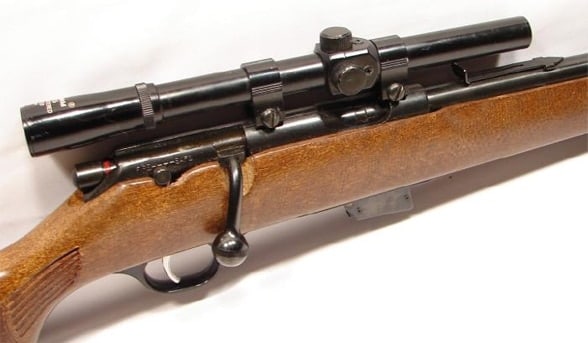 It can fire .22 short, long and long rifle from its seven shot box magazine. You could buy one from JC Penny’s 1976 Christmas catalog for $38.99 (on sale, of course) and it came with a 4x scope. The Model 20 was meant to be an entry-level rifle – nothing fancy, just a barebones .22 bolt action.

Old bolt guns like these have taken more small game than can be counted and even more tin cans.  In my opinion every serious shooter should own at least one .22 bolt action.  They are perfect for working on shooting fundamentals on the cheap. More importantly, they are fun.

The Glenfield/Marlin Model 20 fits the bill for this, perfectly.  They can be found for about 100 bucks in good shape.

Unfortunately, JC Penny no longer sells firearms.  They, like most of the major mail order companies, got out of the business years ago.  (Cabela’s is the closest equivalent we have today).  But the guns they sold are still around and will be around for a long time.  The three above are prime examples of quality guns made by a major manufacturer to be sold at a lower price.  The quality is there and will remain good bargains for years to come.