The first step in buying a Jimenez .380 is convincing yourself it’s worth it 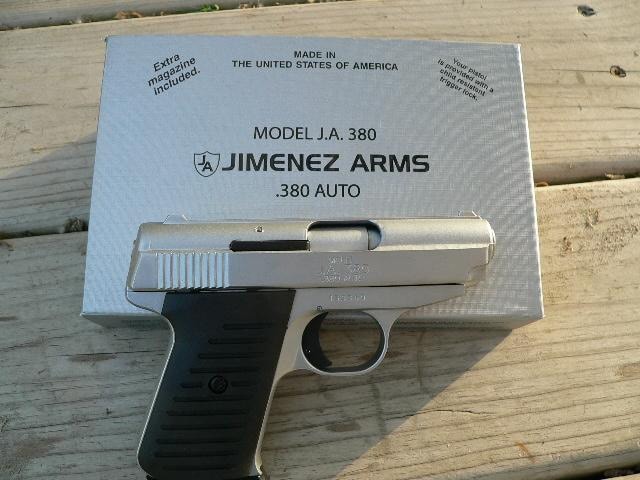 The Jimenez .380, like it says on the box. (Photo credit: Gun Auction)

I really debate writing these things. I don’t want to be thought of as a purveyor of cheap guns of questionable quality, but someone has to do it, I suppose. With that in mind I bring you the Jimenez .380. This gun has the distinction of being the first handgun I ever purchased — sort of.

Back in the 20th century, I was looking for an inexpensive handgun mostly for plinking with my friends on the weekend. I first encountered the Jimenez .380 as the Bryco-Jennings .380 ACP, for which I paid a whopping $90 new-in-box. Although I’ve been shooting a lot of my 41 years, handguns (especially in the early 90s) weren’t nearly as interesting to me as a Ruger 10/22 or the Marlin 60 were.

I chose to revisit this gun in its new incarnation mostly for nostalgic purposes, so let me offer this disclaimer right up front: the first rule of a gunfight is bringing a gun. 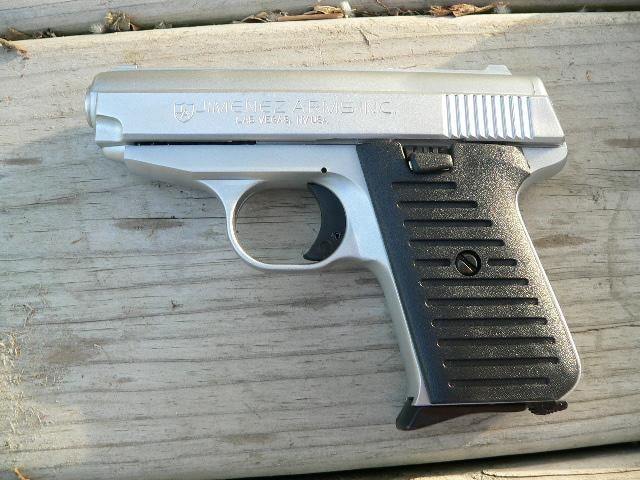 The Jimenez sort of is what it is.  “Saturday Night Special” immediately leaps to mind when picking up this pistol. Even though it is of all metal construction, it just feels cheap. Until I racked the slide on the little .380 I didn’t realize something could sound cheap. I don’t know if it was the lack of lubrication or the quality of the metal, but I challenge you to pick up a Smith & Wesson Bodyguard .380 or a Ruger LCP and tell me if you can’t hear the difference.

The plastic grips screwed to the side don’t exactly inspire warm feelings or pleasant thoughts about the quality of the Jimenez .380 either. I don’t have large hands, but even with the grip extension on the magazine I really struggled to find a way to hold this gun in a way that would allow me to not only shoot it comfortably, but to take quick follow up shots on a target even in a non life-threatening scenario.

The sights — ugh. Don’t even get me started on the so-called “sights” on this gun. Terrible just doesn’t adequately describe them. Even my typical (warm weather) carry Smith & Wesson 638 has better sights than the Jimenez and the Smith’s sights are little more than a groove at the back of the frame and a minuscule blade on the barrel.

Another thing most shooters will find a little hard to get used to is the magazine release. The magazine is removed via a lever on the bottom of the frame, or what’s called European style mag release. What of the fast reload you ask? I wouldn’t count on it. I struggled to get the magazine release to disengage and was nearing the point of using some percussive persuasion before the Jimenez finally gave it up. And once you get the cantankerous six-round magazine finally released don’t expect it to just fall out either. 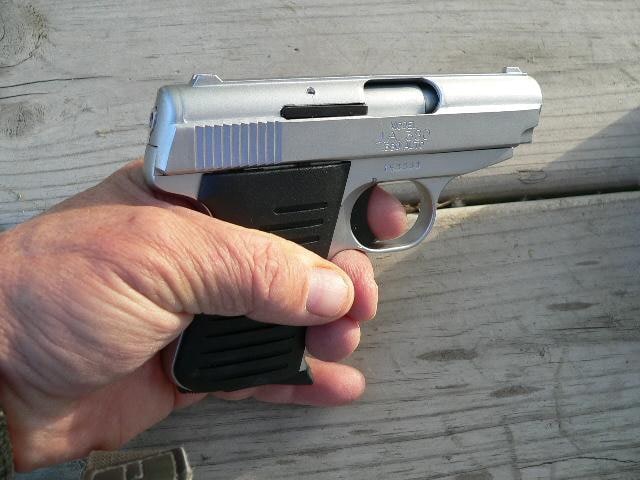 The Jimenez .380 has a short — really short — grip. Even medium sized hands would have trouble. (Photo credit: Gun Auction)

The trigger is another sore spot. It’s not what you’d call smooth. According to the Jimenez website, the trigger pull on their .380 is 8 to 10 pounds. That’s near NYPD levels of trigger pull and in a mouse gun to boot! Maybe because I’m a revolver guy and am used to a heavy or long trigger pull, it wasn’t as much an issue for me in shooting this pistol, but it certainly will feel alien to those of you that carry one of Gaston Glock’s little wonders.

It’s not all bad

The Jimenez does come with a thumb safety that locks very positively when engaged. There is also an indicator with a bright orange button to tell you the gun is cocked.

Okay, now stick with me here because it’s going to get a little bit odd. The sights are terrible and the gun is too small to be grasped with — even below — average size hands, and it feels like one of those novelty lighters you can get from BudK, but I was crazy accurate with this pistol. Not quite one ragged hole accurate, but at 20 feet I was able to produce groupings slightly larger than silver dollar size. Add to this the fact that in firing around 200 rounds through the Jimenez I experienced no failures of any sort.  Not a single failure to feed or failure to eject. Sure, it took me 3 minutes to reload and I kind of looked like a monkey attempting to copulate with a football, but the pistol ran flawlessly for me.

Being as it is a small pistol shooting a largish round, recoil is something to watch out for. The diminutive size of this pistol caused me to get a little bit of slide bite, neatly removing the skin from my strong-hand thumb. Normally I would recommend something like a Hogue Handall Jr. to tame the recoil, but in this case you’d be almost doubling the price of the pistol. 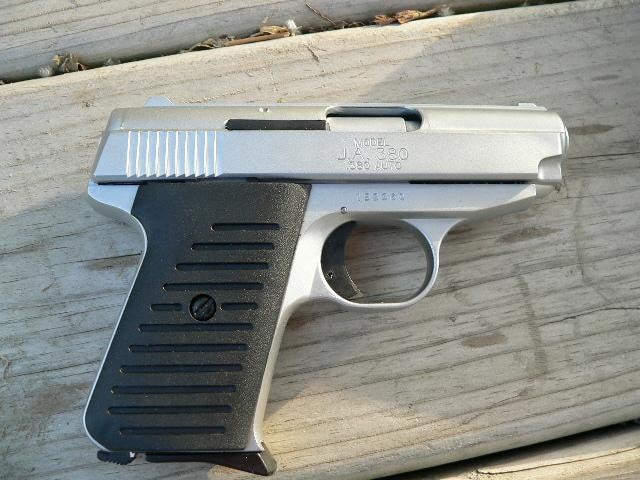 Not the best, but not the worst. (Photo credit: Gun Auction)

Would I recommend this pistol to you? No. My local gun shop sells the Jimenez .380 for about $145 and though the gun ran fine for me, I would not recommend it unless you had no other options. And I mean, kitchen knives, baseball bats, or an angry housecat should be considered above this in terms of defensive weapons.

I seriously debated whether or not to recommend this pistol. I have read recently, on some Internet gun forums I frequent the question “if you had no other options or money for something better, would you carry a (insert cheap pistol name here) for self defense?”  Even if, under those circumstances alone I found myself considering a gun for home defense I still wouldn’t consider the Jimenez .380. While the gun had no issues while in my care, it just didn’t have a “quality” feel to it, something that I would feel comfortable trusting my life or the lives of those under my protection to the Jimenez .380.

Last I checked a used Mossberg Maverick 88 could be had for at or near the same price, so if home defense is the question, the answer is no, to the Jimenez .380. Again, considering the scenario mentioned above where you don’t have the money for something better: life is a risk no matter how you play it. If the choice is between cowering in fear as I or my family are threatened and the Jimenez .380, then would I’d take the Jimenez.