When the KSG was revealed at the 2011 Shot Show, Kel Tec captured the gun world’s interest. They had done it before many times over, but with the KSG it was different.

Right away, it piqued reader’s interest because of its form, its look and the promise of innovations. The KSG holds a total of fourteen shells, it’s compact and easily concealable. With two Picatinny rails, a triangular shape, skeletal design and matte black finish, it reaches the type of tacticool mall ninjas have romantic, yet, awkward dreams about. And it’s a pump action – the most popular of all shotgun actions – so self-defense gurus could discuss for hours over the menacing sound of a slide being racked coupled with the possibility of blasting multiple intruders with a double dose of 12 gauge. So what could go wrong?

Well, right off the bat gun critics saw ways to improve the KSG and Kel Tec agreed. They redesigned the KSG by adding a new action release button – one that worked with a simple swipe of a finger. They provided cuts in the tubular magazines so you could visually verify if there were still rounds in the magazines. And they added a trigger reset, so you could hold the trigger down while you pumped the slide. However, the guys at Guns.com may have some more suggestions as you will soon read. 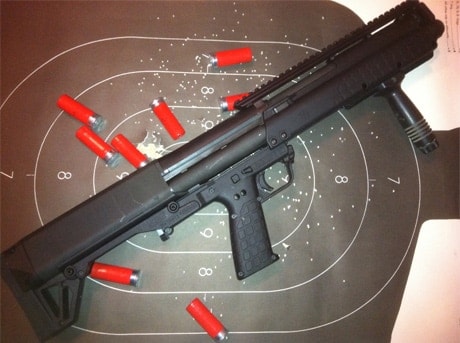 Start with the Good

For being so small, the KSG handles recoil very well. At 6.9 pounds, it’s heavier than it looks. It’s also, just on a personal note, really comfortable which, to the individual user, is going to mean a lot. I’ve heard other reviewers say that it’s a completely different shotgun. No, it’s still a shotgun. The main controls are in the same place as any self-defense shottie – trigger and safety are both within a finger’s reach – it’s a pump action and it shoots 12 gauge shotshells.  See, a shotgun.

It does have a bullpup design, meaning the action and chamber are behind the trigger, which is a true deviation from what we’ve come to expect from sporting shotguns. However, rounds are still loaded and ejected at the chamber, so the bullpup design won’t throw off the uninitiated that much (it didn’t for me).

What will is the magazine selector. It has two magazines tubes and a selector switch, so if one empties you have to reach back and select the full magazine (it doesn’t automatically change) like you would in an old fashion over and under.  After a trial run, it’s pretty darn easy.

We were eager to review the KSG, because after spotlighting the “upcoming” product for almost a year now, we know what the gun means to Guns.com readers. When Kel Tec announced that they were finally shipping it to stores just a couple weeks ago, the news seemed to send electricity through the gun world. The story spread like wildfire via the Internet and folks wanted it so badly that they were willing to pay outrageous amounts above MSRP.

However, when we went out to test it, the level at which it performed as a tactical weapon was laughable – so laughable I’m inclined to think we got a dud and can’t do a proper review. Don’t get me wrong, I like the KSG. The KSG is an innovative idea. Fourteen shotgun shells is enticing. Like all the Kel Tec guns I’ve shot, the KSG was a lot of fun to shoot. But unlike the others (as the SUB 2000), it had problems.

The first time I went out to shoot, I loaded four rounds into it – two rounds into both magazines. I selected a tube, chambered it and when I pulled the trigger – nothing. No bang. So I pulled the slide back, thinking it would eject the shell, but it did not. Instead of ejecting it, the shell stayed in place. However, the second cartridge popped out of the magazine causing a double feed. “No big deal,” I thought. “I’m not using it correctly.” But I was wrong. This was just the beginning.

Without nitpicking, the problem was I was unable to shoot two full magazines without having the bolt cling to something inside the receiver, which prevented it from fully connecting with the chamber. The root of the problem seems to be that the bolt sits loosely inside the bolt carrier. When disassembled you can push it up or down.

Perhaps it is an isolated problem. Maybe this particular model is the only one performing this way. Or maybe you’re not supposed to rapid fire the gun. But the gun is inclined to stick if you fire multiple shots in succession.

But when the bolt snags, the only way to remedy the problem is to slide it back – not all the way mind you – just far enough so the bolt would unhook. However, if I pulled it too far the gun double fed. 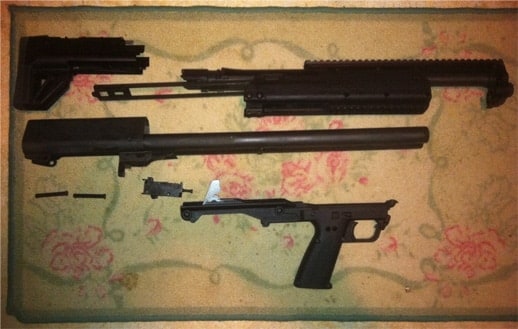 Another culprit that caused the bolt to stick was a loose shell lifter. The shell lifter is actually held in place by two caps and when I field stripped the KSG the caps would fall off. If these caps were not fully in place, the lifter would dangle and interfere with the bolt’s movement.

However, I discovered that when I was more conscious of pulling the slide back, meaning trying my hardest not to let it jam by using a little extra oomph, and then eased it forward to chamber the following round, it worked smoothly.

Slow and steady wins the race. Pulling the slide back like this takes a lot of work – way more than any average shooter would put up with. There are more reliable shotguns out there for considerably less than $800 – ones you don’t have to think about when you work the pump. To compare I bought a Remington 870 Express Seven Round (which actually only holds six rounds, weird) and six times out of six it cycled rounds without a hitch.

Granted the KSG’s controls are easier to use, it’s easier to maneuver, and its pattern spreads comparably to the 870, in the end the 870 was just more reliable. 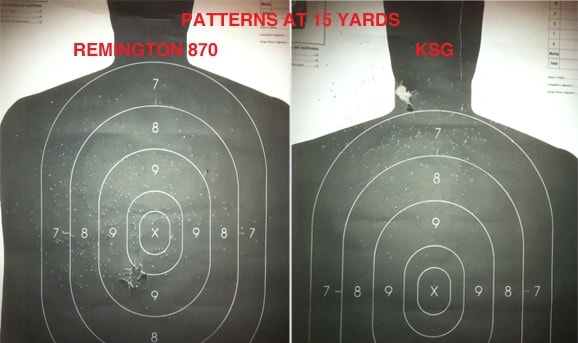 We put in a request for another KSG because it would be unfair to give it a bad review at this time. Out of all the reviews I’ve read of the KSG, they didn’t seem to cover the issue to this extent. They mostly talked about the possibilities of what 14 shots and a short barrel could do. There aren’t that many reviews of it out and there aren’t even that many KSGs available. Besides, with new products it is common for a multitude of problems to occur. I’m thinking the kinks still need to be worked out. So I’m really looking forward to giving the KSG a second chance.