With the long list of subcompact 9mm pistols from nearly every major maker, why consider a Kel Tec PF9?

It’s neither a new-release—having been on the market for several years—nor from a big-name manufacturer.  The two fast-draw answers: price and concealability.

Add to that the fact that Kel Tec is an American company based in Cocoa, Florida, and this gun should still be on your radar.

(Re)Introduce Yourself to the PF9

The PF9 is a semi-automatic, locked breech pistol chambered in 9mm Luger in double-action only with a hammer block safety.  The barrel and slide are steel, while the frame is machined from solid aluminum.  The magazine, which comes with an optional finger extension, holds seven rounds.

The PF9 comes in a very small hard case.  The slide locks open after the last shot. The smaller, thinner grip size fits my smaller-than-average sized hands very well. However, several larger-framed men I know won’t shoot it without the magazine extension, and some have added a Hogue or similar rubber grip for a bit more palm swell. 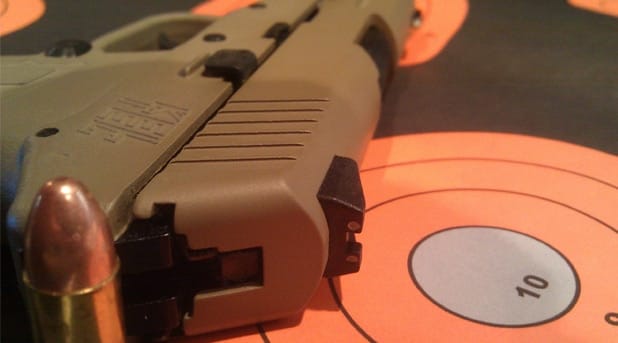 The grip itself is fashioned of a high impact Dupont Polymer.  My version in Cerakote tan is a sharp looking little piece that brings a splash of color to my arsenal.  The finish is attractive and has held up well over the first year’s worth of sliding in and out of various holsters.  I find the squarish grip texture attractive in its unusual styling, though it can be a bit aggressive on the hands after a day at the range.  For a nominal fee, Kel Tec sells a plus one grip extension that adds both an additional round to the magazine and extra length and comfort on the grip for shooters who find the grips on the small side.

Kel Tec offers colors to please just about any shooter.  The PF9 has long been available in blued, parkerized, and hard chrome slide finishes, priced accordingly.  The hard chrome version is perhaps more long-lasting, and many shooters will find it worth the extra dough.  There are many combinations of grip color and metal finish. In addition to the tan is also an OD green. However, several special edition models have been made available to certain dealers, including a navy blue grip frame.

The PF9 carries with a thinner profile than similar-sized .38 snubbie revolvers.  It tucks nicely into the IWB holster and ankle holsters, which I’ve regularly used.  I also look forward to trying it in a shoulder holster under a light jacket.  For larger frame individuals, I imagine pocket carry would not be outside the realm of possibility, especially given the fact that the PF9 is not much larger than its little sibling, the .380 P-3AT.  For that matter, when compared to many concealed carry .380’s, the PF9’s slight size difference is well-worthwhile for what is gained in caliber.

In the Engine Room

The trigger has a bit of a takeup at the beginning, but finishes with a crisp, somewhat heavy pull, which I have come to expect in a small, concealed carry weapon.  Given the long and heavy trigger pull, which Kel Tec advertises around 5 pounds, a bit of practice time goes a long way not only with this firearm, but with any gun on which you plan to rely. 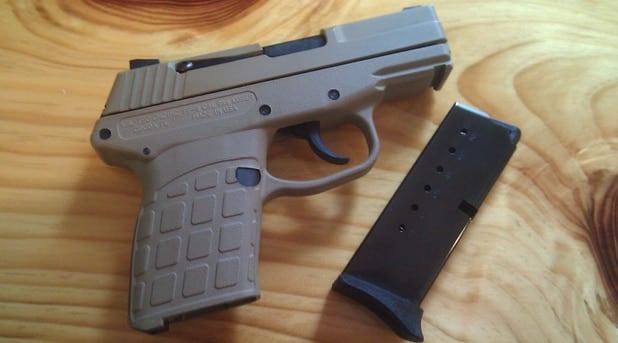 The sights are more impressive than I expected to find on a small gun, and the accuracy matches.  I feel comfortable and confident in carrying it.  Though my daily carry remains a Smith & Wesson 637 revolver—simply because I’m partial to wheel guns—the Kel Tec offers better accuracy with its improved sights and also holds several more rounds.  In addition, there is no shortage of holster options, and several well-known companies offer integral laser sights.

The PF9 will accept +P ammo, though even its own owner’s manual suggests it will not stand up to continuous use of such.  I don’t think the gain of using +P would be worth the tradeoff of the added recoil anyway.  A factory available stainless belt-clip attaches to the right side of the side of the grip frame for simple and affordable concealed carry. Personally I prefer the comfort and fit of the PF9 in a holster, but options are always nice. I found the mag release button easy enough to reach, and it must be pressed with enough pressure that I found accidental dropping impossible to achieve.  On the downside, the fit and finish on the PF9 do not measure up to some of the more well known makers, but then again, Kel Tec’s price point is hard to beat.

Uh-Oh… Trouble at the range 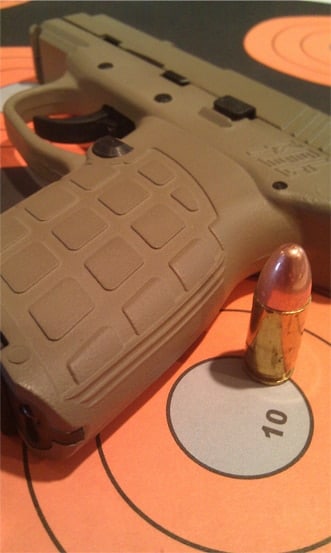 The most grievous issue I had was the gun’s internal finish straight out of the box.  For avid shooters and those familiar with firearms mechanics, a quick tune-up is all that’s needed to bump the PF9’s reliability status up to daily carry.  After pulling mine out of its box with just a quick lube job, I encountered two failure to feeds and one failure to eject out of the first 25 rounds.  Though the gun was not yet broken in, I consider this unacceptable in what I’d purchased as a backup carry gun.  Shooting off a few more mags revealed more of the same. My heart sank and I headed back to the bench to explore the problem.

On the upside, the pistol is easily disassembled, even in the field.  The rim of a 9mm case is the only “tool” needed.  With the slide locked open, inserting the case rim pulls the assembly pin free, allowing the slide, recoil spring, and barrel to come free of the gun.  Re-assembly is just as simple.

On the downside, this gun needed more than a little TLC. As many others have suggested in forums all over the web, the proverbial Kel Tec “fluff-and buff” treatment is not lost on this model.  That is to say, Kel Tec’s rough internal fit and finish matches its outer.  When disassembled, there were several areas of rubbing on the rails, and noticeably rough areas on the feed ramp. It took less than 15 minutes to smooth these areas and thoroughly lube according to the manufacturer’s directions—with a little added help from KTOG, the avid Kel Tec Owner’s Group.  Some suggest going at the fixes with a Dremel tool, a tactic I did not find necessary.

After this hitch, the gun was quickly shooting like a much higher dollar weapon.  My lost confidence was re-gained, albeit slowly.  Since that initial fix, I have run over 500 rounds through the PF9 with nary a hitch.  Though it would be nice to have the weapon come from the manufacturer this way, at its very affordable price tag, the fix was simple enough.  Certainly, this will be enough of a turn-off to deter many would-be suitors.

While I have not personally needed neither their customer service nor replacement parts, I’ve heard through numerous reputable shooters that Kel Tec’s customer service via both phone and Internet is prompt, courteous, and accommodating.  Should parts be required—if not covered under the manufacturer’s lifetime warranty for the original owner—they are affordable and readily available.

Though it may not be as fun or accurate a shooter as a full size 9mm pistol, that’s really not the purpose.  The PF9 is no doubt designed as a personal defense weapon.  Its recoil is stiff with rapid fire, but certainly manageable.  The sights, which are easy to acquire quickly even in low light, line up nicely on target.  They are adjustable for both windage and elevation, the former with the included 5/64-inch allen wrench adjustment, the latter with shims.

My test gun was accurate enough out of the box. At seven yards, knocking down tin cans and grouping in the size of my fist feels good.  Stretching back to 15 yards, I am able to group adequately in a silhouette target with little practice and relatively rapid fire.  I’ve had several new shooters pick up the gun and without practice, put their shots on target at self-defense range. 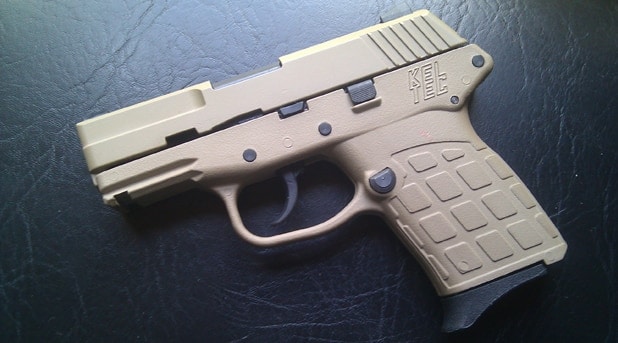 Though I have not yet fed mine any reloads, it has handled every other load I could find, even some at bargain basement prices. The accessory rail, though small, is a nice addition not found on many other carry 9mm’s.  Though it has only one locking notch, the under-barrel rail dimensions match those of a Picatinny rail.  It will fit several smaller model lights and lasers but certainly not all.

Though the PF9 faces stiff competition in the surging market of subcompact 9’s, its affordable price point keeps it afloat.  While KelTec’s PF9 doesn’t carry the brand stability of a Ruger, Kimber, or Beretta, it also doesn’t tug along the price tag of an LC9, Solo, or Nano.

Certainly, the issues I found will not exist on every gun out of the factory, yet those very issues will be enough to put off more than few buyers, and rightfully so.  I would never carry a gun I don’t trust; however, I am glad I took the chance on the PF9.  I knew I could trade it in, yet well over a year later, it remains in my concealed carry rotation, as I’ve been unable to duplicate any of the initial issues—and believe me, I’ve tried.

The PF9 does not have the accuracy of a large frame 9, but then again, it’s not masquerading as such.  Take this gun for what it is–an affordable, American made, deeply concealable 9.