While we wait ever so patiently for Kel-Tec to launch their KSG sometime early next year, we looked at some of their other high-end offerings, and couldn’t help but admire their stout little RFB.

What a lot of people think of when they hear Kel-Tec is inexpensive pocket pistols, like the PF-9, or somewhat novelty PMR-30. But they’re serious about making quality firearms, at both the bottom and top of the price spectrum. The RFB isn’t inexpensive, at between $1,200 and $1,400, depending on availability, but they sell out fast at those prices which should tell you something.

They’re great rifles! Everyone who has ever tried a bullpup or two and decided that the whole lot’s a nice concept, but in practice just awkward usually flips completely around after shooting or even handling a RFB. From Oleg Volk: 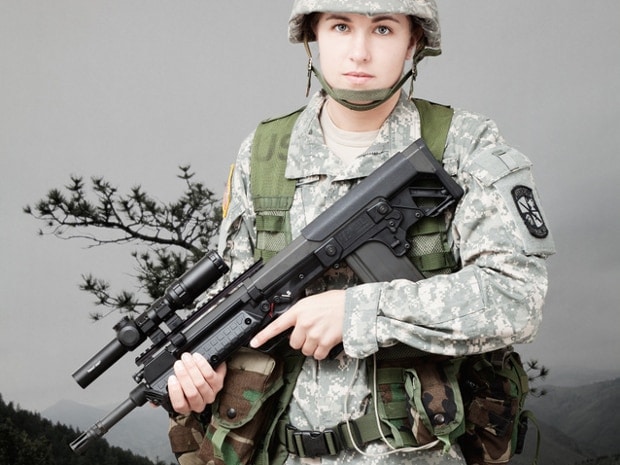 “I keep seeing posts opining that KSG trigger must be awful, “like all bullpups”. RFB .308 and KSG use a very similar trigger design that’s light and crisp. It’s better than any stock AR15 and only slightly inferior to the target-grade ARs. Unlike most bullpups, it doesn’t use the long sear linkage that causes the spongy pull.”

The Kel-Tec RFB was designed from the ground up to be a truly unique rifle. Two aspects are tried-and-true. It uses a short-stroke self-regulating gas piston system. It also uses metric FAL magazines and comes with one 20-rounder. But the rest is uniquely RFB. It uses a double-claw extractor that ejects the case as the bolt closes; the fresh cartridge pushes the spent case out and over the barrel, into an ejection chute and out the front. No flying brass.

It doesn’t come with iron sights, just a Picatinny rail. The rail, however, isn’t mated to a receiver. It’s clamped right around the barrel for a solid, fixed zero. It’s easy to disassemble and doesn’t require any tools.

“At first, I was a bit intimidated about taking this RFB apart to examine the internals, as I have seen nothing quite like this before, but after doing so, found that it is very easy to disassemble for cleaning and maintenance, and nothing more than the nose of a bullet is needed to fully strip this carbine. There are a couple of disassembly pins in the rear, and another in the front, to access parts and to remove the bolt and carrier for access to the barrel breech for cleaning. The gas piston system is easy to clean, and is a very simple and reliable design.”

Shooting the RFB is dangerously easy, and it’s not a picky eater; it is an existential threat to your wallet. Its overall size of 26 inches for the 18-inch-barreled carbine means you can use it in just about any scenario, and it’s threaded for compensators, bigger flash hiders, or suppressors. Even with a suppressor, the carbine is very compact, and the 1:11.25 rifling can shoot both super- and subsonic ammunition. It’s not light, 8.1 pounds, but that’s not heavy and is about the same as an M1A; right in the middle of the 7.62 NATO pack.

Kel-Tec also makes a Target model, with a 32-inch barrel. That particular monster is rated out to 1,200 yards, but is so hard to find as to count as mythical; we’ve seen pictures of them, video of people shooting them, but hell if we’ve ever seen ’em in person.

So if you’re looking for a compact, easy-handling .30 caliber rifle, or are a lefty that’s tired of having brass menace your face, or just want one of the most innovative modern carbines ever, you gotta check out Kel-Tec’s RFB.