In 2011 Kel-Tec introduced a new product, a new product line, and a fresh, new design to the U.S. market called the Kel-Tec Shotgun.

What made it so unique is that it’s a bull-pup, pump action shotgun, and while it works like any other shotgun – you pump the slide, pull the trigger, it goes bang – the way it loads and unloads differs from a basic design like that of the Remington 870 or Mossberg 500.

More often than not introducing something that differs from the norm is considered risky, and in order to be successful the concept has to be good, really good.

So, where does the KSG fall?

The bull-pup design makes the KSG interesting, but that’s not exactly the reason it’s popular. There’s a very specific reason why it was designed with the action behind the trigger group: it takes up less space. Its compact size doubled with two seven-round tubular magazines makes the KSG ideal for self-defense scenarios and a really hot ticket item.

What’s holding it back?

The KSG is intimidating and sexy – the epitome of tacticool. Picatinny rails run up and down it for whatever gear strikes your fancy (However, sights and, in the author’s opinion, a vertical fore-grip are a must). But adding accessories doesn’t make the gun function any better.

Early on Kel-Tec identified concerns that could interfere with the basic operation of the weapon such as an issue with the trigger reset and an awkward slide release. In addition, Guns.com discovered quality control issues. The model tested and evaluated for Part I of this review had issues loading because an internal component would consistently hang up when working the pump, and consequently caused double-feeds.

However, the model tested for this review – 10 months later – things worked great. No problems, no hang ups, no issues.

Originally the component was designed for tight tolerances, but, as it turns out, they were too tight. The current process, Guns.com can confidently say, ensures that the component is adequately sized for a competent performance.

Shooting the KSG will be familiar enough to even a novice shooter, but loading and unloading may throw off the saltiest dogs the first time around.

The shotgun is designed with one barrel and two tubular magazines. The magazine doesn’t change automatically when emptied, but rather the user has to reach back and flip a switch to change magazines.

Aside from having to train yourself to change the magazine, it’s a cake walk. The pattern spreads like a Remington 870 with a longer barrel at 50 yards. And recoil depends on what you put in it and number of shots in a row. In other words, it shoots like a 12-gauge shotgun.

And because of its compact size it’s easy to maneuver and carry in a tactical stance or slung over your shoulder.

Who wants it, who gets it?

Judging on Kel-Tec’s product stills, in the future the company sees the KSG in the hands of military and law enforcement personnel. And while there’s no news of crates of KSGs being shipped off to troops or the boys in blue, the U.S. Corrections Special Operations Group (U.S.-SOG), a government contractor, seems to fancy it. The group has made a few videos where an operator tests the KSG by repeatedly slamming it against the ground, tossing it off of balconies, dunking it in water, blowing it up – basically beating the hell out of it only to discover that it still functioned properly afterward.

Besides U.S.-SOG really liking it, so does the public – the idea of it at least. Kel-Tec has had an easy time marketing the KSG to civilians, as it has been the focus of numerous articles and forum threads around the Internet. But marketing is one thing, demand is another and very few people have been able to get their hands on one. 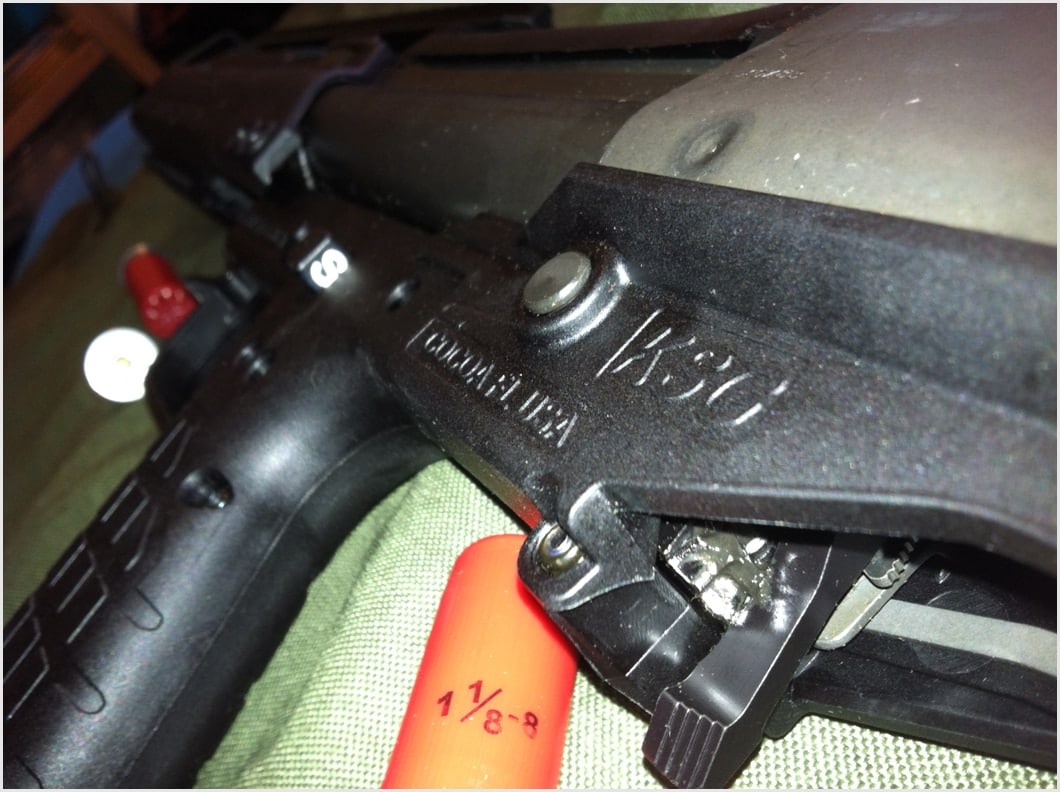 The shooter can select a magazine with a lever behind the action. Each magazine holds seven shells, so the KSG has a 14+1 capacity. (Photo by Daniel Terrill)

“What we build is what we ship. From the engineering side, we are continuously improving and expanding. We stop manufacturing some machined accessories to free up more time on the machines for KSG parts,” Williams explained. “I know it sounds cliché, but we’re literally cranking them out each week, but the demand is so high that you probably won’t see them in the stores still for a bit.”

But you should keep your eyes peeled. Monthly shipments leave the shop in Florida to distributors all across the country. And those same distributors dictate what stores gets how many KSGs.

As it turns out gun owners welcomed the idea of a high capacity, compact shotgun. I would go so far as to say it was one of the most talked about guns of the 2011.

But whether the KSG will be a financial success is anyone’s guess – there simply aren’t enough available right now and it’s still too early to tell – but it is fair to say the KSG got other companies thinking. We are seeing more of these types of shotguns coming to the U.S. – the UTS-15, the SRM-1216 – so the question becomes is this a fad or the next step for the tactical shotgun market?