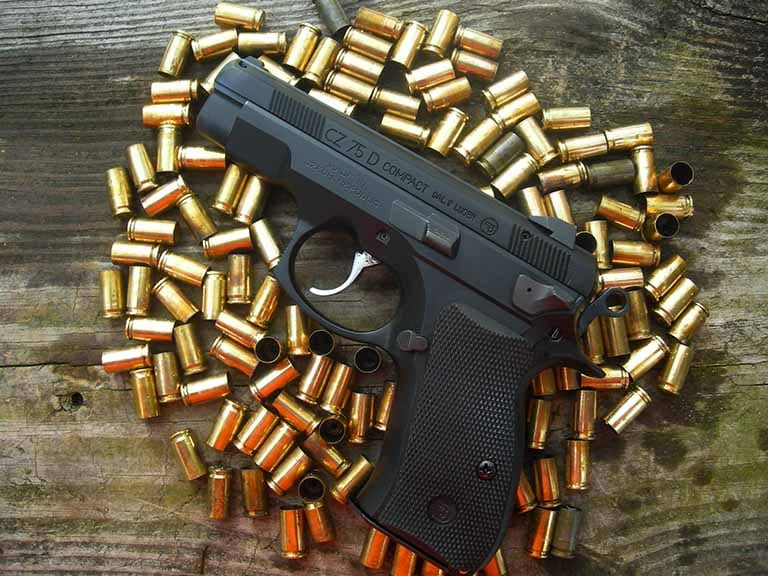 Happiness is a warm gun (Photo by: F. Borek)

Many people have had guns that they regret selling. Mine was a CZ-75B; it was my dream gun. I was a giddy college student when I brought home that black plastic hard case with a large ‘CZ’ marked on top, several months later I traded it away.

I am sure that while many of us have had guns we regret selling, we also have guns that we don’t regret selling too much, either for real or perceived flaws in the design. For me the CZ-75B was just a little too big. Yes, the extra weight helped to absorb recoil and for those velocity minded folks the longer barrel helped to wrangle every extra bit of speed out of the 9mm round. Nevertheless, the grips were just a little too large for my hands and I did not like the plastic material. Plus the control surfaces were a little on the small side. Due to its size and weight I could never really see myself carrying the gun very often, if ever.

Many months after I sold the CZ-75B, I decided that I would like to give the CZ-75 another try, just not the B model. What I wanted was a pistol that fixed the perceived flaws in the pistol. Luckily my local gun store had a solution sitting in their new pistol case. That pistol was the CZ-75D PCR Compact; the acronym ‘PCR’ meaning “Police Czech Republic”, or — thanks to Wikipedia — Policie České Republiky.

For weeks one of my local stores had a small inventory of the hard to find PCR in stock. Deciding that the PCR fixed my perceived flaws in the larger B model, I sold a Mini-14 with a Ram-Line folding stock for a healthy sum to fund my purchase. Lucky for me I picked up the last PCR the store had. This purchase was in October and as of the end of February, I have not seen any more CZ-75 PCRs in that store. 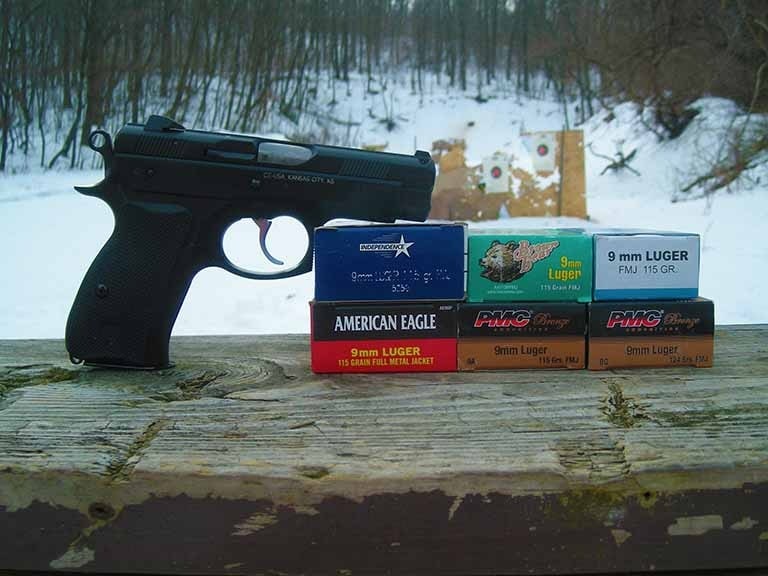 For those die-hard CZ fans, the PCR model is a hard to find model. MSRP is $599 and I paid $549 plus taxes and transfer fees. Inside the hard case is the pistol, two nicely blued steel 14 round magazines, plastic cleaning rod, cleaning brush, manual, warranty card and computer print-out of the test target showing point-of-aim, impacts and average point-of-impact.

The gun is stocked with very comfortable and form fitting checkered black rubber grips. The pistol is finished in CZ’s proprietary black Polycoat, a durable matte black finish that feels soft and rubbery to the touch. It is a very unique finish that gives the pistol a no-nonsense look. Three-dot, snag free sights top the pistol, while the bottom of the grips feature a beveled magwell and a lanyard ring, intended more for police officers than for concealed carry.

Vertical serrations are present on the front strap and backstrap of the grip. The slide features front cocking serrations for those who like them. I found no machining marks on the inside of the frame, indicating the quality of CZ’s work. There is a de-cocker instead of a safety, which is how the CZ-75D PCR Compact received the ‘D’ designation. In addition, there is a firing pin block, similar to the Colt Series 80 or Glock pistols. The PCR also lacks a magazine disconnect, a feature that no doubt many will like.

Field stripping the gun is easy to perform. Nevertheless, the parts fit tightly, so having a small plastic hammer might help. First drop the magazine and clear the pistol. Cock the hammer. Pull the slide to the rear slightly, so that the two notches on the slide and frame line up. While holding the pistol in this position, push out the slide release pin on the opposite side of the pistol; a hammer might come in handy. With the slide off, push the guide rod and spring forward up and then out. Lift up and remove the barrel. Easy day as we used to say in the Navy. 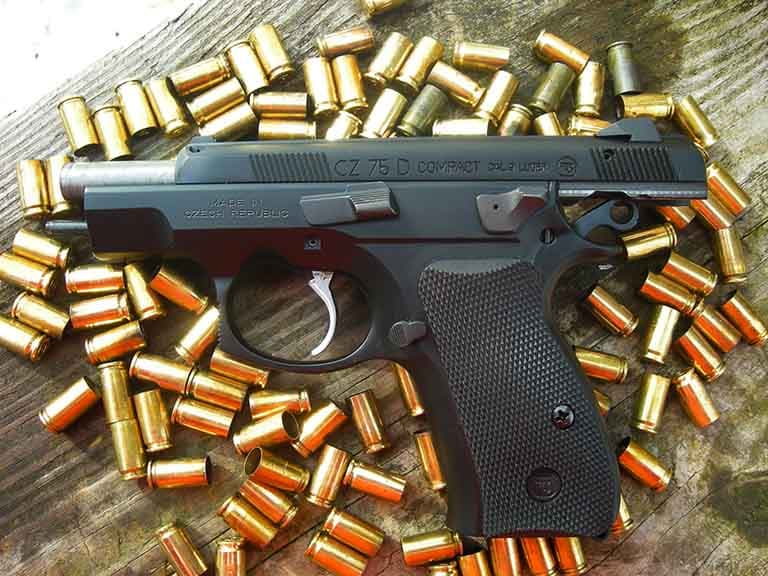 CZ, still running like a champ (Photo by: F. Borek)

I believe the CZ-75D PCR fixes the flaws I found in the CZ-75B. The slide is small enough for concealed carry and the weight issue is fixed thanks to an aluminum alloy frame, instead of the forged steel of the B model. There are also scallop cuts all over the frame to assist in ergonomics and to help decrease weight. The slide release and de-cocker levers are larger than that of the B model, thus easier to use. The black rubber grips ensure that the PCR feels nearly perfect in the hands. The CZ-75 family has long been heralded as having the best grip in the semi-auto pistol world, being one of the very few designs that can challenge the revolver in this category. As much as I love my M1911 and Browning Hi-Power, I must admit that the CZ-75 PCR feels better than either of them. Simply put the PCR is a much improved model of the original CZ-75.

Polymer framed pistols are here to stay, but that doesn’t mean that everyone has to like them. On the contrary, there are many people out there who are vehemently against polymer framed pistols. There are also shooters who don’t find any fault with polymer framed pistols, but prefer the feel of a metal framed handgun, me included. Luckily CZ is one of the few companies whose flagship model isn’t polymer framed. I also like the PCR, because the pistol is a true double-action to single-action design. While some striker fired designs require you to pull the slide back a short distance to re-cock the gun, that is not the case with the PCR and it’s hammer fired design. This extra bit of reliability and ease-of-use helps the PCR with both veteran and novice shooters.

All the best ergonomics in the world won’t mean anything if the gun doesn’t shoot well. The design of the slide aids in the pistol’s accuracy. The slide rides inside the frame, creating a more rigid gun without sacrificing reliability. Unfortunately, the slide design is also something of a drawback, with very little area to grip when you rack the slide. While this is tough to do on an empty chamber, it is a bit easier to do with a loaded magazine.

Some elitists and handgun snobs turn their noses up and insult those who choose a pistol with a de-cocker, but the gun is perfectly safe to carry with the decocker dropping the hammer to the half-cock notch due to the firing pin block. Many of those same snobs will tell you that you can’t shoot with such a heavy trigger. Not true; you can achieve satisfactory groups with the double action pull as long as you practice. The double action feature is also nice for people who are comfortable with revolvers; all you need to do is draw the pistol and pull the trigger, if you decide to carry it with a loaded chamber. There is a small silver button on the top of the slide which serves as a loaded chamber indicator.

The trigger has vertical serrations and will get better with time… While not heavy or gritty in single-action, there is some take up and a little bit of creep before the break. Double-action is a heavy ordeal, much like a double-action revolver. While not the smoothest of triggers, it’ll smooth out eventually; it has done so on mine. Now there is a nice audible, tactile and short reset with no over travel. 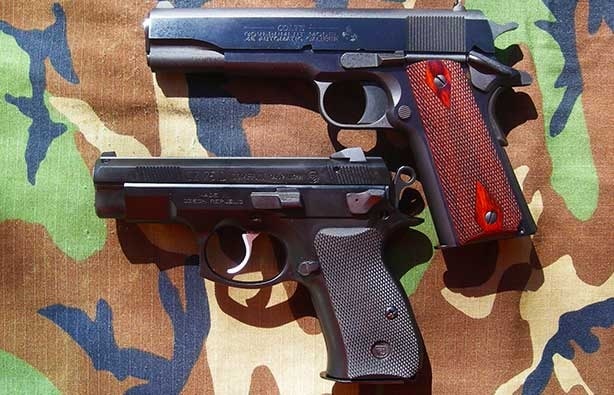 The PCR will devour every 9mm round you throw at it and ask for more: 115 grain, 124 grain, brass, lacquer coated steel, poly-coated steel. Recoil and muzzle flip are a little snappier than a full size 9mm, but that is expected for a gun that sacrifices weight and size. When practicing speed reloads, the beveled magazine well does help with inserting the magazine. Even though the magazines hold 14 rounds, if you’re just practicing on the range, I suggest you load ten rounds. The springs are very strong and your thumbs will thank you for not torturing them.

Accuracy is good as long as the shooter follows through when they pull the trigger. The sights are nice and wide three-dot sights. If that doesn’t suit your fancy, there are plenty of aftermarket options. The only perceivable downside is that the baseplate of the magazine extends a small amount past the bottom of the magwell. This could cause an issue for those with larger hands, but for me this was not a problem.

The PCR is a great handgun for both the novice and veteran shooter and improves in almost every aspect from the original CZ-75 design. Some people will view the de-cocker as a deal breaker, but I prefer it over the a traditional safety and I know there are plenty of people out there who share my sentiments. Self proclaimed trigger snobs can check out work from CZ Custom, but most people will find the trigger to be just fine and will accept the fact that it will get better as you shoot the pistol.

In short, the CZ-75D PCR Compact is well worth the money. In this day and age many people rave about the latest polymer framed handgun and load it up with hot ammunition and all sorts of tactical tchotchkes. Not the folks at CZ, they are still doing things the old-fashioned way. True, they are making polymer framed pistols, but even those pistols use the basic CZ-75 design. Happily, for us old-schoolers — I mean classical connoisseurs, they still proudly market metal framed pistols complete with their nearly perfect grip.

The CZ-75 is an old design and it just works. The CZ-75D PCR Compact takes what already works and makes it even better.