Varmints are those pesky little animals that habitually burrow through gardens, gnaw on fence posts, and loiter in the middle of the road late at night. While there are numerous methods that can be used to prevent them from engaging in their favorite activities and ruin your day, hunting seems to be the most popular. The Kimber Pro Varmint is a fine rifle for revenge— I mean hunting those depraved little pests.

From the robust grey laminated stock to the durable stainless steel barrel, the Pro Varmint is an attractive rifle and proved more than capable of holding up during the hot and humid summer days in southern Wisconsin. Performance-wise, it’s easy to handle and handle quickly – an important trait when the critters you’re hunting move a faster than you.

The Pro Varmint is part of Kimber’s 84M series, which includes more than 10 different rifles each designed for purposes ranging from hunting big game to long-distance shooting, and as you may have guessed, varmint hunting. And the Pro Varmint comes in the ideal calibers such a thing: .204 Ruger, .223 Remington and .22-250 Remington.

Overall, the best way to describe the Kimber Pro Varmint is with three S’s: Solid construction, sturdy stock and steady barrel. The rifle has a 24-inch stainless steel, bull barrel putting its full length at 43 inches, and the weight at eight pounds. Also, it also has several small details that should be noted and I at least appreciate them. The barrel and bolt both have fluting, a process that puts grooves on the exterior, which helps reduce the overall weight and give it a unique appearance. It has glass bedding so the receiver and stock fit tightly together and resist movement when the rifle fires, and it has a barrel crown on the muzzle.

The crown is a slight indention on the muzzle and theoretically it helps reduce recoil. It’s the small touches that make something really radiate quality. 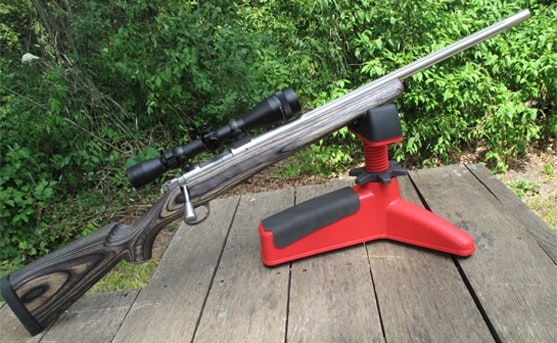 What was most impressive, though, was way the Kimber Pro Varmint handled. Two features come to mind when I think about its performance. The first is the three-position safety, which is actually called a 3-position Model 70-type safety. While the first and third positions do exactly what you expect them to – set the gun for ‘safe’ and ‘fire’ – that middle position allows you to engage the safety but still load and unload the rifle. You’d probably make most use of it when you’re reloading while hunting, or shooting rapidly like when you’re out plinking or target shooting.

The second is its trigger. It’s a bit empowering to have a trigger so responsive – like the rifle is truly an extension of your body. It’s very light and very crisp and allows you to shoot right when you have to – like when you dial in on the conceited little opossum that you swerved away from out of instinct and drove off the road. It has an adjustable single-stage trigger with a factory setting of three to three-and-a-half pounds. 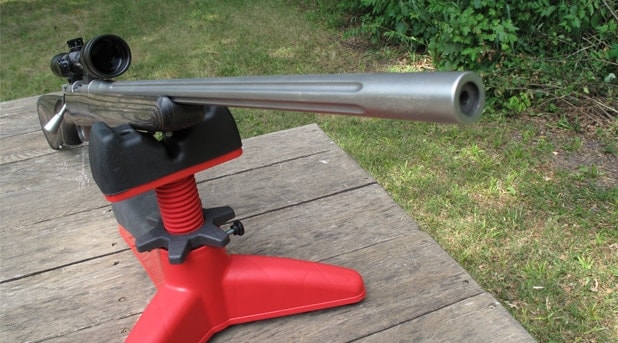 Theoretically when loaded with high quality ammo such as Federal Premium and Nosler Varmegeddon, the Kimber Pro Varmint is capable of picking off targets farther out than 200 yards (that’s when the trajectory begins to drop for .223 according to both Nosler and Federal’s data).

During two days and shooting a few hundred rounds, we determined that the performance – on everything – was topnotch. With the thick recoil pad, recoil was next to nothing. The flat fore-end made positioning a cinch, especially in a rifle sled. The action was smooth as all get out. Never had a problem or a hang up.

As far as accuracy is concerned, the rifle is really only as good as the person pulling the trigger. Using both types of ammo, in the standing position at 50 feet it’s easy enough to maintain groups around an inch, and at 100, also in the standing, it’s certainly conceivable to shoot that well, but your humble author was able to shoot around 2- to 2.5-inch groups and my cohort about 3-inch groups.

Like I said earlier, the Pro Varmint rifle is easy to shoot quickly. In less than a minute I was able to get five shots off at 100 yards picking off various small objects. Ranging from biggest to smallest these objects were bowling pins, a small rubber prairie dog and soda cans. And this test was performed after a day of shooting and 200 rounds. In the end the heavy barrel didn’t heat up to a concerning or conflicting degree.

Ammo: Only the good stuff

The Varmegeddon maintains a rather high velocity until the projectile hits about 400 yards, according to the data. That’s about when it reduces to less than 2,000 fps. The only complaint I heard about it comes from comes from Shooters Forum where a gent explained:

“While the Varmageddon’s certainly kill things, I was a little disappointed with the lack of explosions and aerial antics. … Looking at the carcasses shows that the Nosler’s are a pass through, with not a tremendous amount of damage.”

So depending on what type of hunter you are, meaning if you want to eat what you kill or just stuff it, the Nosler Varmegeddon is a great choice. But bear in mind “aerial antics” depends on the size of the animal and how you shoot it. (Note: People generally don’t eat prairie dog because it can carry pretty nasty bacteria.) 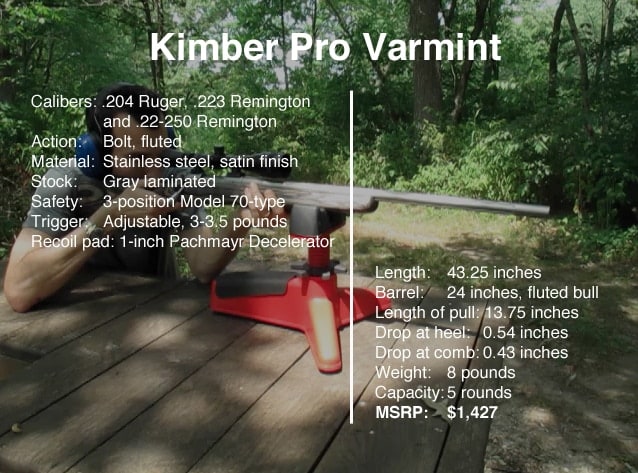 The Federal Premium V-Shock, which is the recommended brand to use with Kimber guns, actually has a similar performance to the Nosler because they both use 55-grain Nosler bullets.

I wouldn’t knock either brand. When they’re stuffed into the magazine, you will have the confidence it’s gonna go bang.

I have yet to hear any real complaints about the Kimber Pro Varmint or the ammunition. The rifle was accurate and easy to handle, so it would be great for doing what it was built to do – hunting – but it would also be a great target rifle as you can shoot repeatedly without a major change in performance.

The Kimber Pro Varmint’s listed retail value is $1400, but price varies online from $700 to $1000. While the price may seem a little, just think about the bubble in your tire, the quills in dog’s nose or even the sprained ankle from stepping in a hole. While it might not be the most efficient form of pest control, it sure as shit will be the most therapeutic.