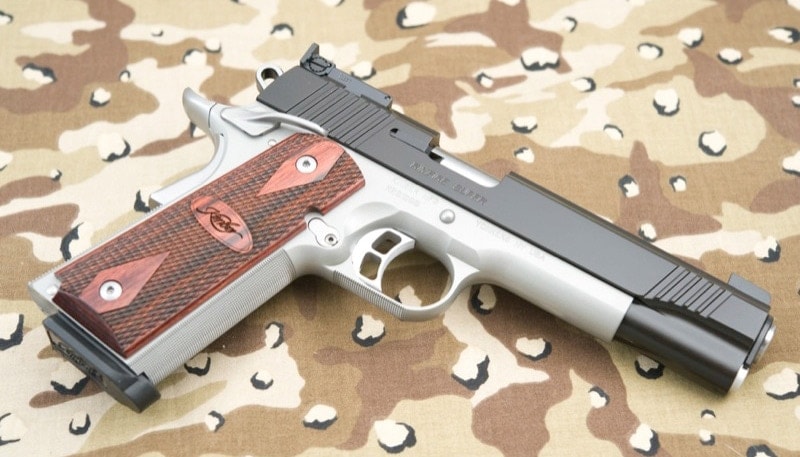 I prefer my 1911s to be in John Browning’s chosen .45 ACP, but having one set up to properly handle a .22 LR cartridge makes all kinds of sense for a number of reasons, such as getting practice with the platform at a small fraction of the ammo costs of shooting .45 ACP. And for that, the Kimber Rimfire Target model is an excellent choice.

First off, this is a 1911. Same size, same operation, same ergonomics. It’ll fit in your holsters, and everyone who sees it will recognize the look, but it has a different weight. It weighs in somewhere around a pound and a half, loaded. That’s about a pound lighter than your typical 1911, which feels weird the first time you pick one up — really weird, like a lot weird. 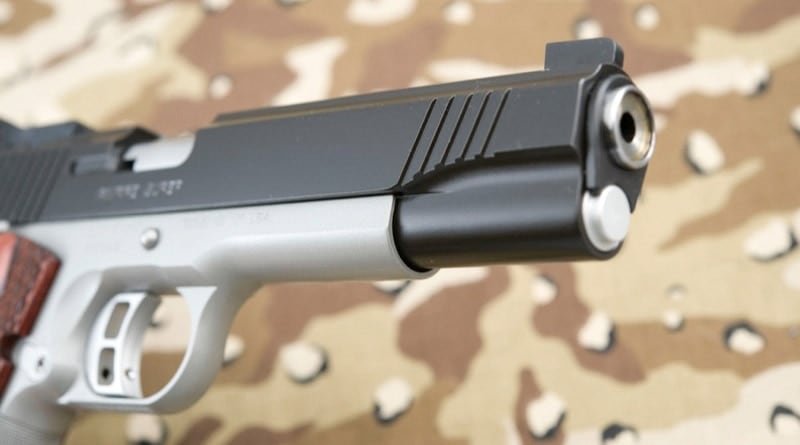 The reason, of course, is that most of the gun is aluminum alloy. Partly this is just to make the thing work like a 1911 with such a low-powered cartridge. To accomplish this, the slide needs to be very light, and aluminum takes care of that. But don’t worry, the critical operating parts are good steel, and hold up just fine.

This is a quality gun and exactly what I expect from Kimber, a company that has spent a number of years perfecting their take on the 1911.

The Rimfire Target gun we used for the Ballistics By The Inch .22 tests last summer was several years old and had seen a fair amount of use, but it was still in excellent condition, with the fit and finish still quite good. I’d expect the gun to maintain that condition for many years of use so long as reasonable care was taken of it.

The Target model comes with match grade barrel and bushing, fully adjustable target sights, and an adjustable trigger. The one we used hadn’t been messed with – the owner was happy with the trigger and sights straight out of the box. I found the trigger a little harder in pull than I usually expect in a target 1911, but it wasn’t bad. It was smooth and broke crisply. The sights were fine, and the gun shot as well or better than I do. 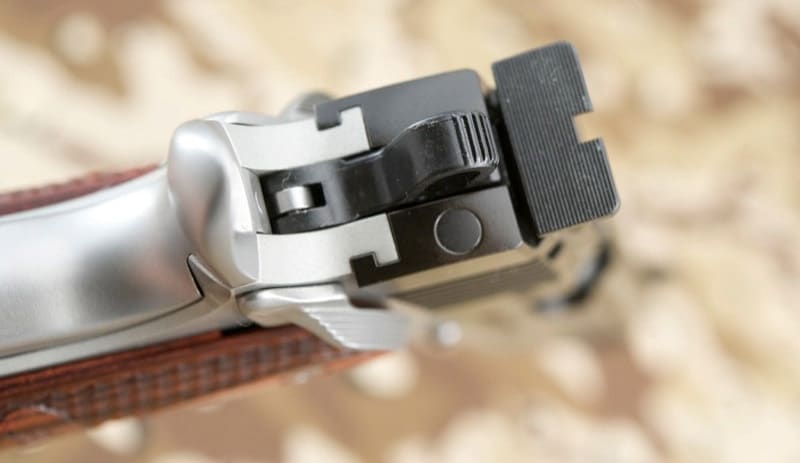 The grips on this model are the standard black synthetic, which I found comfortable enough. The back strap is checkered, and it’s easy to maintain a solid grip on the gun.

The matte black finish was fine, and seemed to hold up to the use the gun had seen. All the operating surfaces were properly mated together, without any marring or roughness. Like I said, it’s got Kimber quality.

We ran 10 different brands of ammunition through the Rimfire Target, from light .22 shorts to the heavy, 60 grain Aquila SSS. They all operated in the gun without problem, and the gun cycled just fine. Performance was as good or slightly better than the longer barreled Ruger Mark I with a 5.5-inch barrel or the Model 617 Smith & Wesson with a 5.875-inch barrel.

This is a target gun and as I’ve said before I don’t think of a .22 gun as a good defensive option, but if you’re someone who is familiar with a 1911 platform, yet want very light recoil in a carry gun, this would not be a bad choice with the right ammo.

Still, I think the niche that this gun fits is for those who want a quality semi-auto .22 handgun that will also serve for keeping their 1911 skills fresh. While the Kimber Rimfire Target is light weight, the overall experience was very much like shooting a good quality 1911. And it’s hard to beat a .22 for inexpensive fun times at the range.

It’s a good gun, from a trusted company.