Like an iPhone, or a Sony flat screen TV, or even a new Dodge Challenger, the Kimber Solo Carry is an attractive contribution to the modern mechanical world. It’s plain meets flashy.

Square meets round. Old meets new. A bit emo, maybe. Kimber has taken a popular pistol design that works—a 1911—and updated it aesthetically.

The Solo resembles a 1911 in many ways because it was, in fact, based on the ubiquitous design. Like the 1911, the Solo has a single-action only trigger, fixed sights and a manual safety. It differs in that it lacks a grip safety (which would be a superfluous feature for the gun’s compact size).

The 9mm is generally considered to be a manageable round in terms of felt recoil, but it can be rather harsh when chambered for a subcompact or pocket pistol. However, with the Solo recoil was manageable. Its aluminum frame added a bit of heft and balance, and countered recoil moderately well. The only discomfort was in my trigger finger, which suffered a slight sting similar to being poked with a ballpoint pen. But as far as any uncomfortable kick in the rest of my hand, there was none. And my smaller-framed cohort didn’t have any complaints about it either. 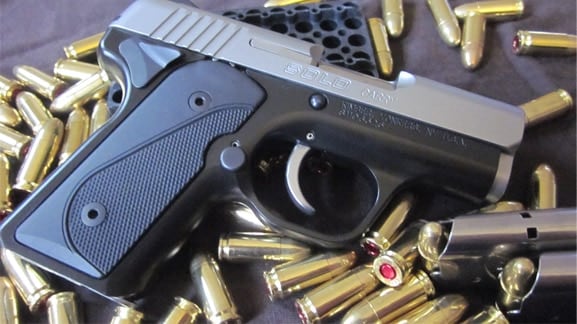 The grip handle was long enough to comfortably get two fingers on and a third tightly around the edge. At just shy of an inch thick, the Solo has a slim profile, but enough girth for a tight hold. Keep in mind that the Solo is a concealed carry gun and not a range gun. Because of the short grip handle, it’ll jump a bit, even with a tight hold, when shot. 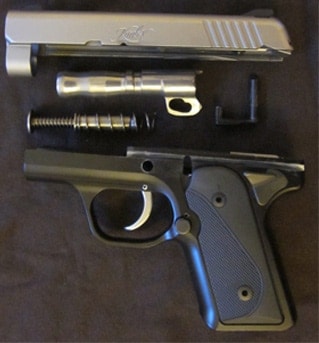 The grip panels are plastic (actually the only plastic components on the gun) and have a rather comfortable texture—meaning no uncomfortable rubbing or annoying slipping.

The Solo’s trigger looks like a double-action because there’s a large gap between it and the frame, but it’s single-action and striker fired. All in all, the trigger felt springy, but not bad. Avid shooters should be able to intuit the break.

Internally there’s no rattle or loose components, and it has a simple construction. Field stripping was much easier than expected for most high-end handguns—the process reminded me of a Glock. All one must do to take it apart is push out the slide stop, pull the trigger and take off the slide. It breaks down into five pieces.

The fit and finish—which is my favorite attribute of the Kimber Solo—can’t be beat. The light glossy black of the frame compliments the matte stainless steel slide nicely, giving the gun a sleek and sexy profile. With the smooth, round edges, it’s rather comfortable to hold and would be easy to grab when concealed in a pocket or holster.

For the evaluation we were equipped with 300 rounds of Federal Premium ammo, American Eagle FMJ target rounds and Hydra-Shok JHP hollow-points (both 124 grain), and the brand-new, right out-of-the-box Kimber Solo.

Although the Solo exemplifies industrial grace, I wish the same could be said about its reliability.

Three times it had failed to go into battery, meaning the slide didn’t travel all the way forward when chambering a round. Each time the Solo was slingshot, which, according to its manual, is the suggested way of loading. However, if you locked open the slide, inserted a magazine, and then released the slide, it loaded without a hitch.

Kimber actually says on its website, “Solo is designed to function optimally using premium hollow-point self-defense factory ammunition,” which I found to be a true statement. We experienced four failures to feed, but only with the full metal jacketed ammo. It cycled every time with hollow-points.

Lastly, there were a handful of times the slide failed to lock to the rear on an empty magazine. We were equipped with three factory mags, of which only one consistently held the slide back. My first thought was the other two are defective, but upon further inspection and cleaning the weapon (at home) I realized that all three magazines worked when I pulled the slide back to its limit. So I think all this means is that the tolerances are still tight. 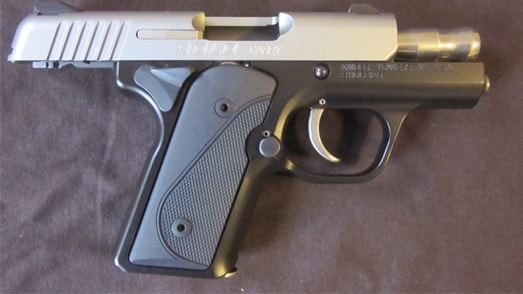 However, Kimber magazines are a bit controversial with the most common complaints being they fail to hold-open the slide, and feed every round. Many remedy this by buying brand magazines like Wilson Combat (for Kimber 1911s that is).

As far as accuracy is concerned, at 25 feet, shooting at a 7.5-by-7.5-inch target, we were able to keep groups between three to five inches.

If it had scrolling or some type of magnificent engraving it would be a fantastic collector’s gun—it really is that pretty—but if you want it strictly for concealed carry, than you’re going to have to break it in.

Like a Kahr PM9 or CM9, the Kimber Solo costs about the same (MSRP $725) and it’ll need some conditioning. The tolerances and components are just that tight. So, if you want to own it, you’ll have to work with it. And like any relationship it will either get better with time, or, well, let’s just say you probably won’t want a gun around if it doesn’t.